Stanley Hill, a pioneering black labor leader who headed New York City’s largest public employee union for more than a decade, until he was forced to step down amid revelations of overspending and mismanagement, died on Friday in Queens. He was 82.

His death, at a hospital, was confirmed by his son Brett, who said the cause was complications of pneumonia.

A former welfare caseworker, Mr. Hill rose to become a major player in the intertwined worlds of local union and party politics.

He was the first black executive director of District Council 37 of the American Federation of State, County and Municipal Employees, the largest public employee union in New York City. He served from 1987, when he emerged as Victor Gotbaum’s handpicked successor, until 1999, when he retired under pressure.

Heading the confederation of 56 locals, Mr. Hill helped his 120,000 members, who ranged from accountants to zookeepers, avoid threatened layoffs. He also persuaded the New York State Legislature to sweeten pension benefits, swayed the city not to privatize municipal hospitals, and won a three-year guarantee of job security in 1995.

But that job security was coupled with a two-year wage freeze, which made the five-year contract agreed to in 1995 widely unpopular with the rank and file. Two union officials later admitted to having rigged the ratification vote on the contract, though they insisted that Mr. Hill had been unaware of their tampering. He was never personally implicated.

The two were among more than 30 local leaders and other officials convicted not only of vote fraud but also of taking kickbacks and embezzlement. The two officials alone were accused of stealing more than $1 million.

While critics complained that Mr. Hill had overlooked profligate spending by leaders of some union locals to retain their loyalty, he argued that the locals’ operations were largely beyond the day-to-day control of District Council 37.

“He was loyal to people who would do things that he would never do,” John Talbutt, who was vice president of the social workers’ local that Mr. Hill headed until Mr. Talbutt was defeated after a similar scandal in 1970, told The New York Times in 1998. “I don’t think he had good judgment of character.”

Despite the pay freeze for workers, whose median salary was about $27,500 (about $46,000 in today’s money), union leaders were spending lavishly on themselves, including $345,000 for a reception at a union convention in Chicago in 1996.

The scandal prompted the parent national union to force Mr. Hill to retire and to replace him with a trustee, who remained in charge of District Council 37 until 2002. 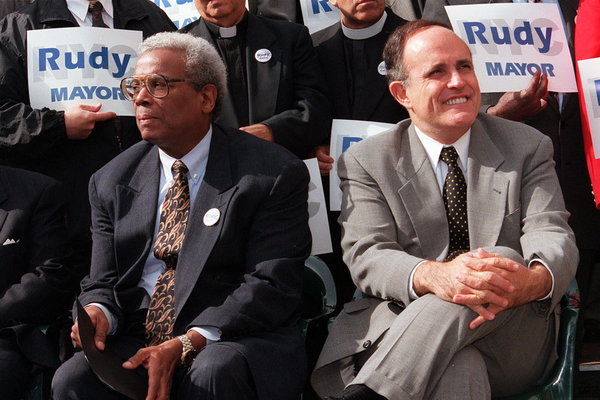 “He retired after it was discovered that some other leaders had betrayed the members’ trust,” Henry Garrido, District Council 37’s current executive director, said in a statement on Monday.

Gerald W. McEntee, the president of the national union at the time, said of Mr. Hill in 1999, “He felt it was time to retire, after a good career.”

Earlier in his tenure Mr. Hill was regarded as an amiable, unpretentious and indefatigable leader who made job security a priority. “In the 1970s I saw a lot of members lose their jobs, and I said that would never happen to me,” he told The Times in 1991.

“Hill was a pioneer as an African-American leading a major, powerful New York institution and one of the leading African-Americans in the labor movement,” Joshua B. Freeman, a distinguished professor of history at Queens College and the City University of New York Graduate Center, wrote in an email on Monday.

He added: “He used D.C. 37 to support a host of progressive causes. But his record was tarnished by his failure to see and stop the corruption that infiltrated the union.”

But by the mid-1990s Mr. Hill had allied himself with the Republican Rudolph W. Giuliani, who had defeated Mr. Dinkins for re-election in 1993. To the dismay of union dissidents, Mr. Hill accommodated a Giuliani administration program that let welfare recipients earn their benefits by doing the work of city employees.

Stanley Weldon Hill was born on Sept. 24, 1936, in the South Bronx and grew up on the Lower East Side of Manhattan, a son of Merton and Anna (Grover) Hill. His father was a mechanic and his mother a homemaker.

Stanley played basketball for Central Commercial High School in Manhattan and for Iona College in New Rochelle, N.Y. He attended Iona on an athletic scholarship and excelled at playmaking.

Mr. Hill recalled that he first experienced racism during a road game, when players for the University of Mississippi were ordered by the governor not to compete against a team that included black players. The entire Iona team walked off the court in protest; the Mississippi athletes later went to Mr. Hill’s room to apologize.

After graduating in 1959, Mr. Hill hoped to teach, but he could find employment that year only as a welfare caseworker for the city. Hailing from a union family, he had his own baptism in the labor movement on the picket lines of a 28-day strike in 1965 by welfare workers seeking collective bargaining rights.

In 1981, Mr. Hill was recruited as associate director of District Council 37 by Mr. Gotbaum and groomed as his successor.

In addition to his son Brett, he is survived by his wife, Ruby; another son, Stanley Jr.; and four grandchildren.