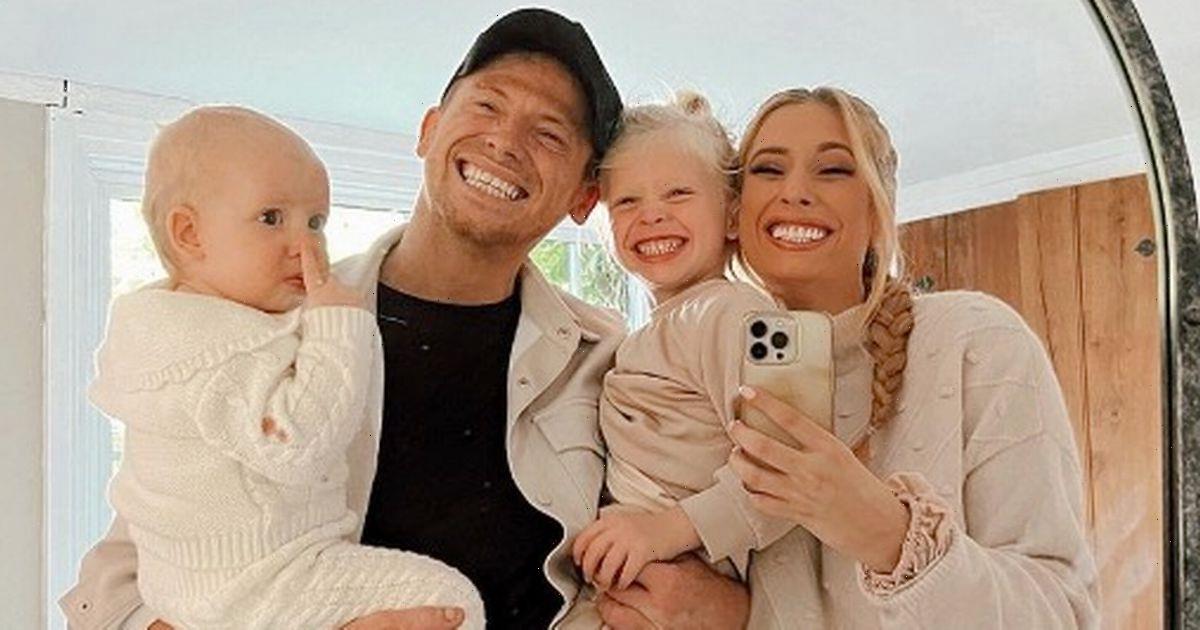 Stacey Solomon and husband Joe Swash have delighted fans with the announcement that they are expecting their third child together.

In a shock announcement on Wednesday, she revealed to her 5.4 million Instagram followers that she is expecting her fifth child.

The new arrival will have four older brothers – Stacey and Joe’s son Rex, and their children from previous relationships, Leighton, nine, Zachary, 13, and Harry, 14, as well as older sister Rose, who is one.

Here's everything we know about Stacey's pregnancy so far…

"This is the best news, bubba," he can be heard telling her.

A picture showed Joe tightly embracing a beaming Stacey as he gave her a kiss on the cheek and showed off the test.

Alongside the video, Stacey wrote: "So grateful & can not believe I’m saying this… Another little pickle is on the way…

"A HUGE surprise, but one that we are so thankful for. To the moon & back bub @realjoeswashy."

The Sort Your Life Out presenter, who typically keeps her followers entertained daily on social media with 'tap to tidy' cleaning transformations and adorable clips of her family life, was suspiciously quiet over the festive season.

But Stacey revealed the reason was her "shocker" pregnancy, saying: "I know I've been so quiet… Didn't really know what to say."

"So excited to share this shocker with you all… love you lots," she added, alongside crying face emojis.

An intimate wedding at Pickle Cottage

Stacey has confirmed she was pregnant during her summer wedding to husband Joe, although she didn't know it.

The couple tied the knot in July earlier this year at their Essex home Pickle Cottage surrounded by their friends and family.

Responding to fan comments on Instagram on a post she shared showing off her blossoming bump, Stacey wrote in the comment section: “For those saying you knew when we got married well you could have let us know Poirot," followed by a series of laughing emojis.

A fast-approaching due date

Stacey has revealed that "this time next month" they will be preparing for the arrival of their latest 'pickle'.

She gave a gorgeous update on her pregnancy alongside pictures of her blossoming bump. Wearing Calvin Klein underwear and jeans for the professional shoot, the former X Factor star looked radiant as she smiled and posed with her hubby.

"Coming soon… Much sooner than we thought," the star began her caption with a laughing emoji. "When we found out we still wanted to have that first few months you usually would to adjust and get excited and enjoy it to ourselves, but that didn’t leave us with very long left.

"So this time next month we will be getting ready to say hello to a whole new pickle. So grateful."

In one shot, the Tap to Tidy author gazed down at her baby bump, while in another she cozied up to Joe as he lovingly held her hand.

Stacey went on to say that she and Joe took the opportunity for some time at home with the children over Christmas to really bask in their impending arrival and they decided to capture the special moments along the way.

"While we had some time off we thought we better take some memories before it’s too late," the star continued. "@chelseawhitephotog who took our wedding pictures took these photos for us."