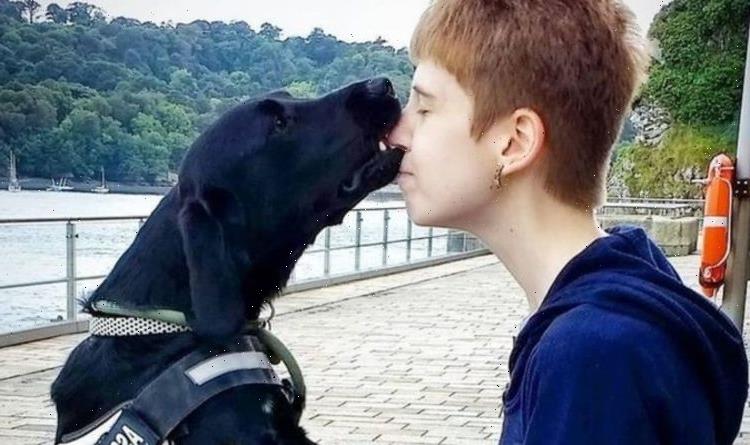 Ryder the Springador first came into Ruth Gregory’s life four years ago, when it seemed unlikely that the 25-year-old would not live beyond Christmas. As well as having autism, Ruth also suffers from Mast Cell Activation Disorder, meaning Ruth was left Ruth unable to eat as it was too painful and had to be tube fed.

Since entering his owner’s life, Ryder, an assistance dog from Autism Dogs CIC, has helped Ruth go from strength to strength, something mum, Kim Gregory, thought would never happen.

The five-year-old pup has now been nominated for an award in the Naturo SuperDog Awards 2021, where people cast their votes in an online poll.

On what winning would mean to Ruth, Kim told TeamDogs: “Ruth would be so delighted because he is just so deserving.

“He is such a lifesaver for her really, genuinely, she was so ill at one point.

“She was even told at one point that she might not make it through to Christmas, well I was told that in the September she was that poorly, and it’s just turned everything around.”

Describing how Ryder has helped Ruth emotionally and physically, Ruth said: “He has responded to emergencies without specific training to do so. He barked for help when he couldn’t rouse me after I fell unconscious on the floor when home alone.

“He responded to a head injury by bringing a phone to me and then laid by my side until help arrived.

“He has been in ambulances, laid with me on hospital beds after I’ve had major surgery, licked tears away when I have been crying out in agony and even alerted me to a break-in. “He brings water and medicine to me when I’m very unwell.”

Having meltdowns almost every day, the therapy canine was able to detect when Ruth was showing signs of distress.

But thanks to the comfort he provides her, they are now a rare occurrence.

Ruth added: “His support helps to keep me calm and prevent the initial rise in anxiety and sensory overload.

“He almost always intervenes before I reach a meltdown.”

Describing a meltdown, she said: “My anxiety is rising and my dog senses this. He pushes his head against my leg. If I am already sat down, he will use his paw to signal that I need to calm down.

“My senses are becoming flooded with information but I can focus on the pressure of my dog resting against me.”

Not only has Ryder helped Ruth cope better with her mental health and autism, the 25-year-old has become more social, even feeling comfortable now talking to strangers.

She said: “I find communication extremely challenging and was once mute for a period of months. I sometimes found it impossible to talk to members of my own family.”

There’s no denying that Ryder has completely transformed Ruth’s life for the better, something both she and her mum are extremely thankful for.

The 25-year-old credits her dog for bringing hope to what she calls a ‘hopeless situation’, and now lives in her own flat with Ryder.

She said: “My incredible autism assistance dog Ryder has transformed my life, bringing hope to a hopeless situation and bringing joy to a broken heart.

“In the years before Ryder came into my life, my sadness and severe pain almost killed me. I had to pull out of the A-Levels that I had worked so hard for.”

She added: “Ryder is a true hero because my life is now filled with more smiles than tears. I felt like a lost cause but now I feel more secure than I ever have before…my wonderful friend has dedicated his own life to transforming mine.”

Ruth’s mum Kim, also notes Ryder making a huge difference to not just her daughter’s life but to the whole family, saying: “She couldn’t cope really, she was really poorly, and when Ryder came, he’s been totally life-changing for her. He’s been amazing.

She added: “He does so many things and that’s on top of the fact that now she has confidence to go into a shop, go out walking by herself, you know, live a more normal life.

“He’s a real crutch to her. And he’s such a real ball of sunshine, you can’t feel down when you’re with him, he’s just such a happy little soul.

“And actually, when she got him just really seeing her smile for the first time in years. It was such a difference. It’s just lovely actually because he’s such a part of the family. He’s just changed her life so much.”

The Naturo SuperDog Awards will be hosted by TV presenter Stacey Dooley and take place at a celebrity-hosted evening in London this November.

Dog owners are invited to share their stories of how their pets have made a difference to their lives and promote responsible dog ownership.

For more information about the Naturo SuperDog Awards and how to enter, visit www.superdogawards.co.uk

Keep up to date with all our TeamDogs news by following our social pages. As well as videos, tips and advice, we’ll also be sharing some of your amazing doggy pictures so follow us on Facebook, Instagram and Twitter.