Royals on the school run! Spanish Princesses Leonor, 13, and Sofia, 12, are joined by parents Queen Letizia and King Felipe as they arrive for the first day back after summer

King Felipe and Queen Letizia of Spain looked every inch the proud parents as they dropped their daughters off for the first day back at school today.

The Spanish royals joined other mothers and fathers taking their children back to Santa Maria de los Rosales, in Madrid, after the summer break.

Princess Leonor, 13, and Princess Sofia, 12, looked delighted to be seeing their classmates and beamed as they made their way up the school steps. 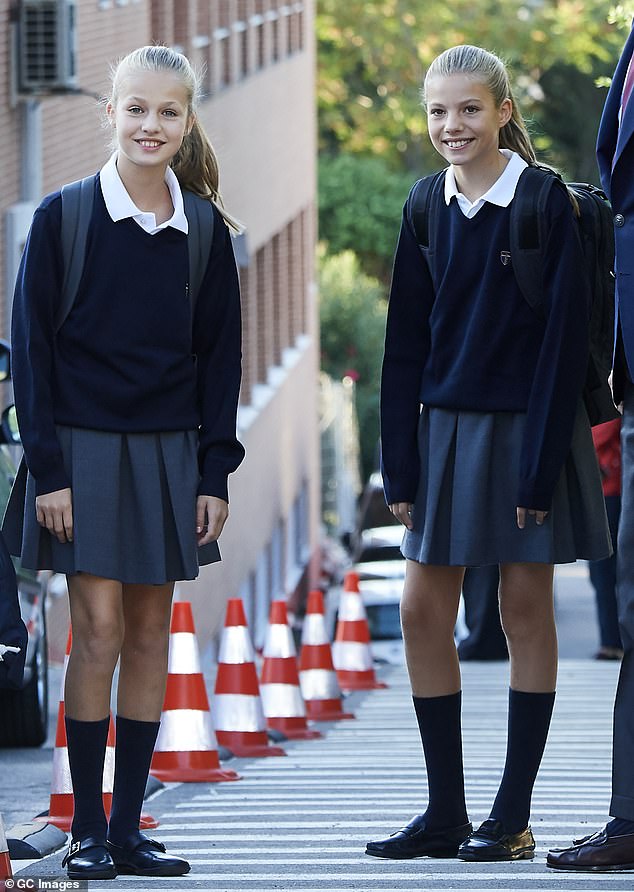 Princess Leonor, 13, left, and Princess Sofia, 12, looked delighted to be seeing their classmates and beamed as they made their way into school today, pictured 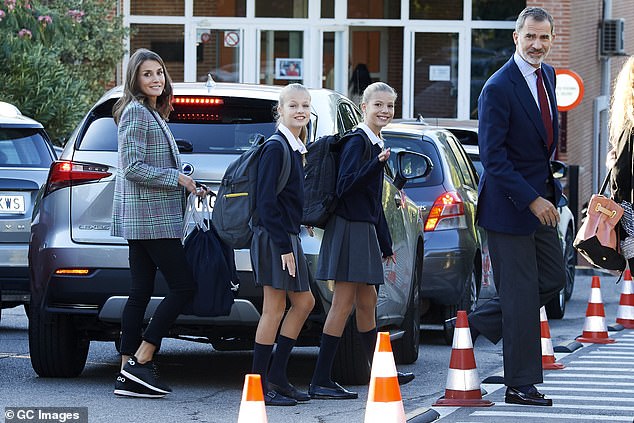 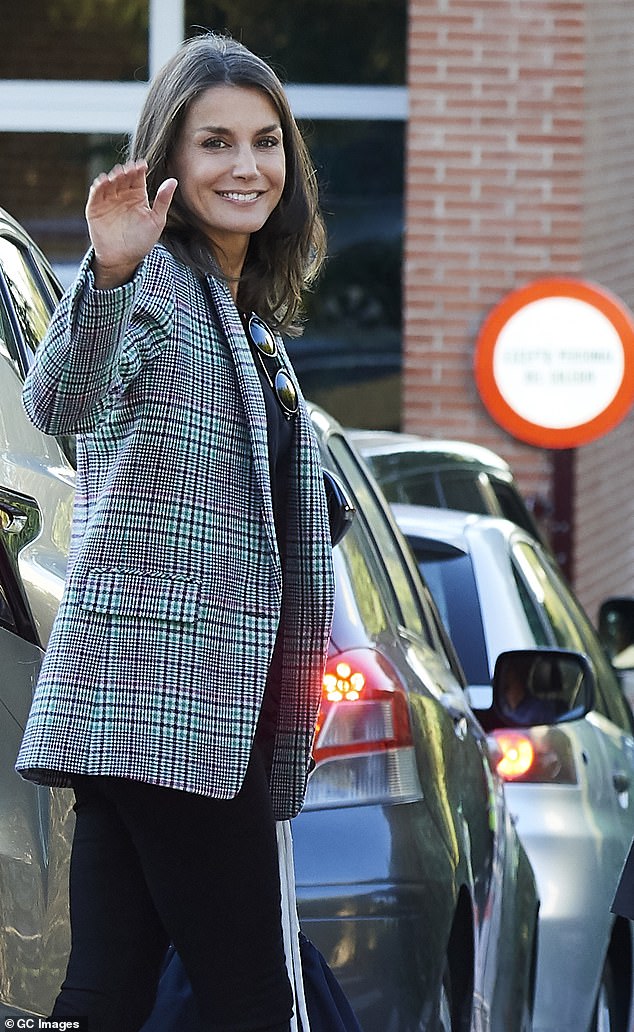 Queen Letizia looked typically stylish in an oversized check blazer as she joined her family for the school run. She dressed down the polished piece with black trousers and trainers 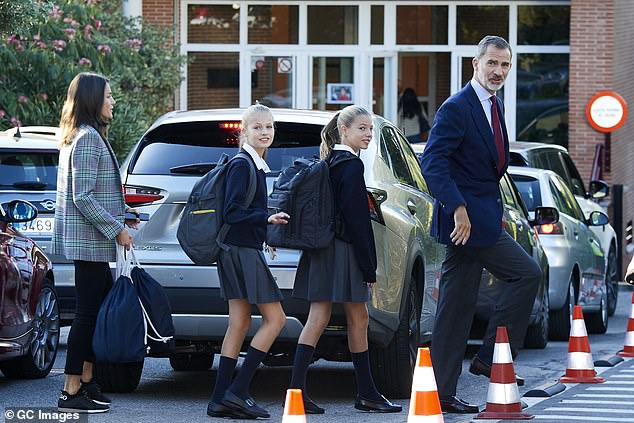 King Felipe of Spain led his daughters into school while Queen Letizia carried their PE kits. The schoolgirls looked excited to be returning and smiled for the cameras on their arrival

It is believed that Princess Leonor is starting of third year of secondary education, while Sofia is starting her first. However this has not been confirmed.

King Felipe looked typically dapper in a suit and tie for the outing, while the ever-elegant Queen Letizia plumped for an oversized check blazer. 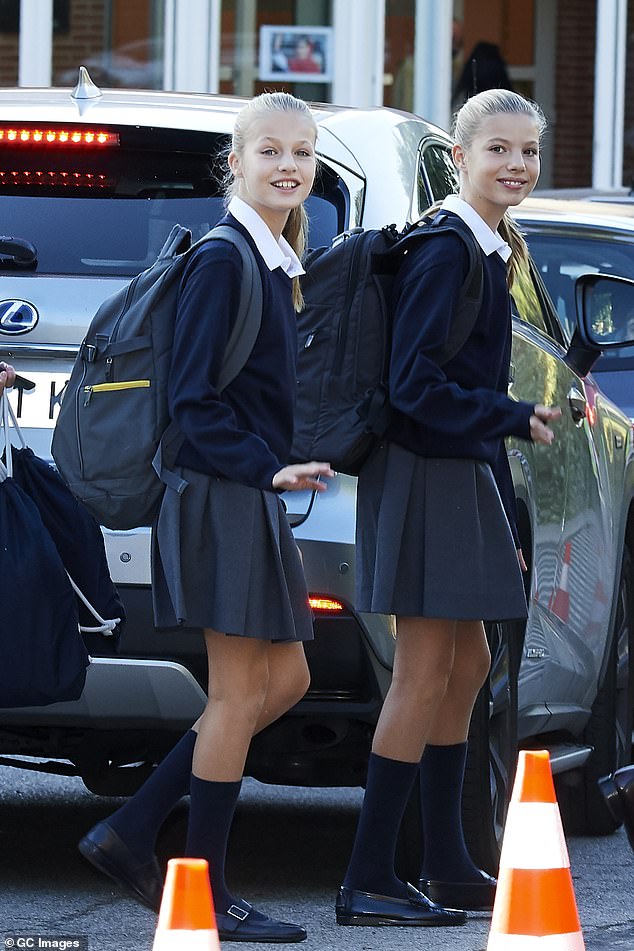 Lookalike sisters Leonor, left, and Sofia, are understood to be starting their third and first years of secondary school, respectively. The princesses spent time in Mallorca this summer 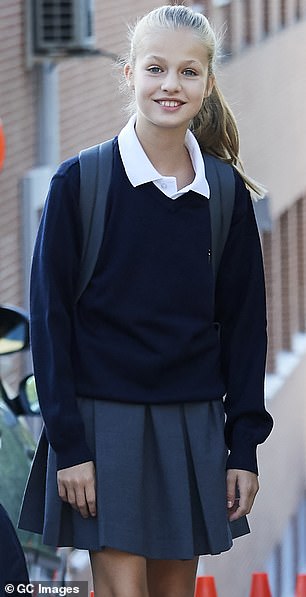 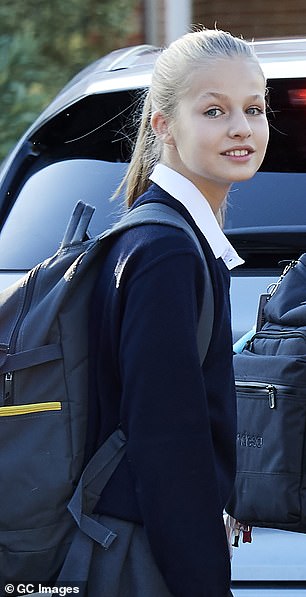 Future Queen of Spain Leonor, pictured, looked comfortable in front of the cameras as she arrived. The young royal has started to take on more of a public role within the family 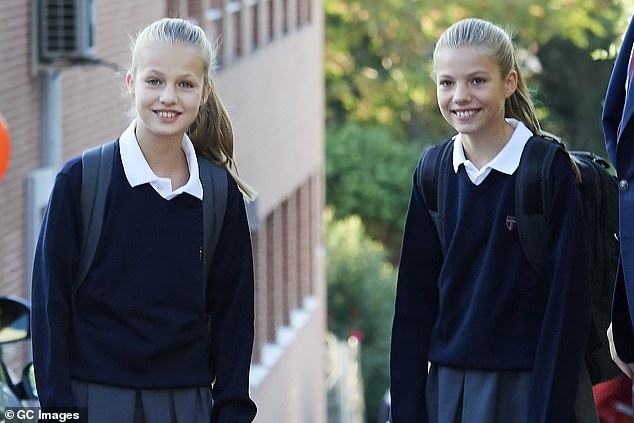 Leonor, left, and Sofia, right, looked smart in their school uniforms of a skirt, polo shirt and jumper. The young princesses were seen holidaying with their parents in Madrid this summer

In a nod to the more casual attire of many school mothers, the queen paired the tailored jacket with a pair of black skinny trousers and black and white trainers.

She wore her brunette locks in a relaxed down do.

The princesses made a number of public appearances this summer as they joined their parents on the Spanish island of Mallorca, staying at their holiday home Marivent Palace.

The family took part in a number of photo calls as they made sightseeing stops and took in the local landmarks. 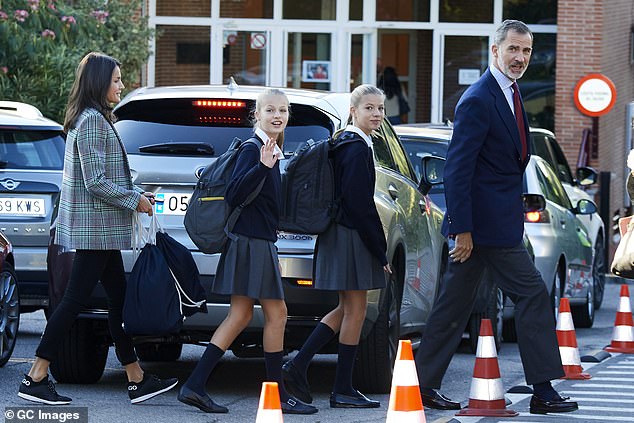 The Spanish royals joined other families heading back to school at Santa Maria de los Rosales, Madrid, this morning. King Felipe led the way in his suit, shirt and tie 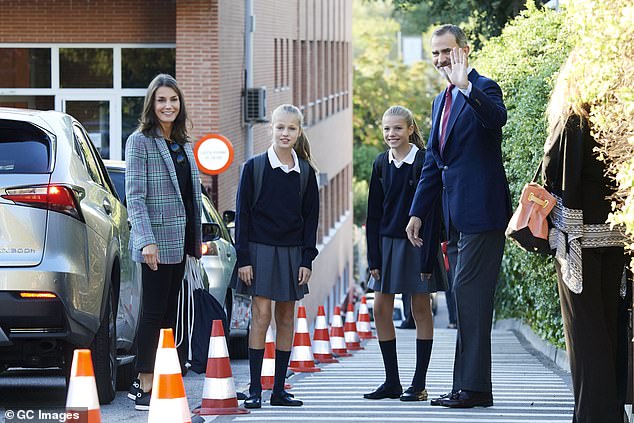 After striding ahead, the family briefly stopped to pose for photos, pictured, before making their way inside. Letizia and Felipe both waved for the cameras