Sophie Wessex put on a down-to-earth display at a dairy farm in Cornwall on Tuesday, donning practical leather boots to get up close and personal with some of the four-legged residents.

The royal, 53, was seen greeting inquisitive cows on her visit to the home of Cornish Gouda Co, an artisan cheese company run from a small dairy farm in Looe.

Dressed in sturdy brown boots and a navy coat, Prince Edward’s wife was evidently unafraid to get her hands dirty, stroking cattle and picking up and examining handfuls of hay as she took in the workings of the farm. 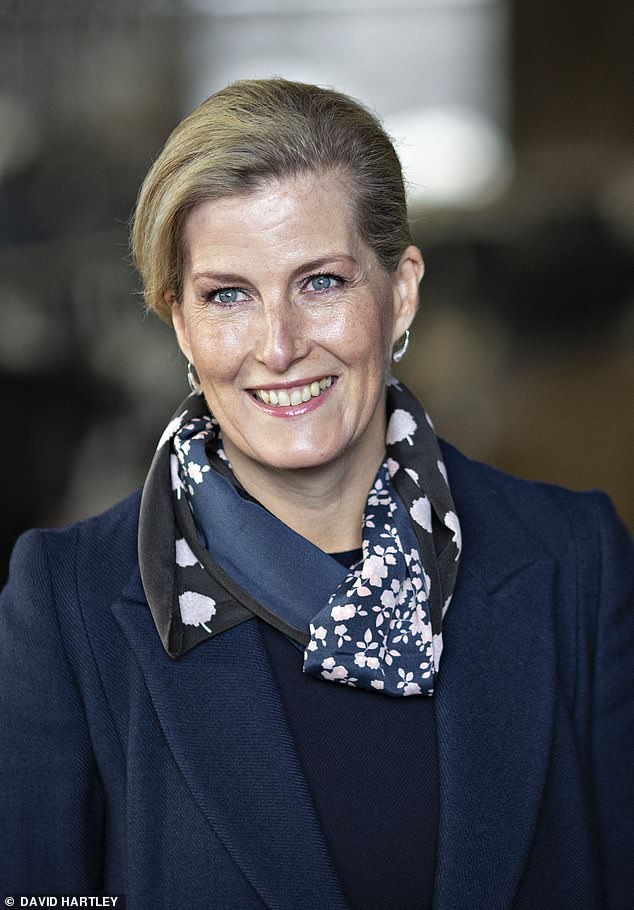 It was a solo visit for Sophie, who is mother to Lady Louise Windsor, 15, and 10-year-old James, Viscount Severn, with Prince Edward.

Dressed in a navy wool dress, the royal colour-blocked with a coordinating coat to ward off the winter chill.

Livening up the ensemble, she added a silk patterned scarf to the look, injecting a splash of colour with her rose-coloured lipstick.

Wearing her hair in a low chignon, Sophie put on a touching display with the cows, smiling as she petted one on the nose. 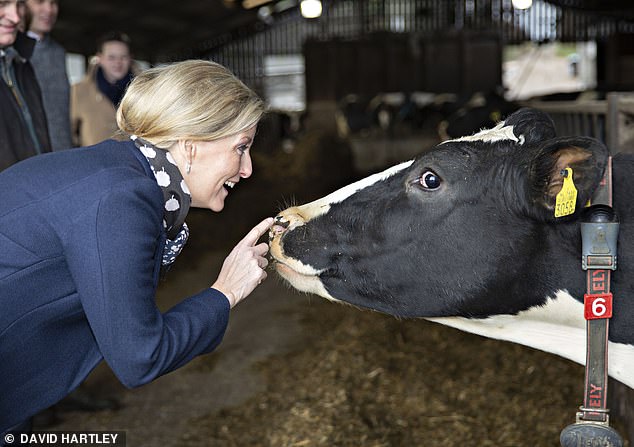 Dressed in sturdy brown boots and a navy ensemble, the Countess was not afraid to get her hands dirty, and was seen stroking the friendly cattle as she admired their barns 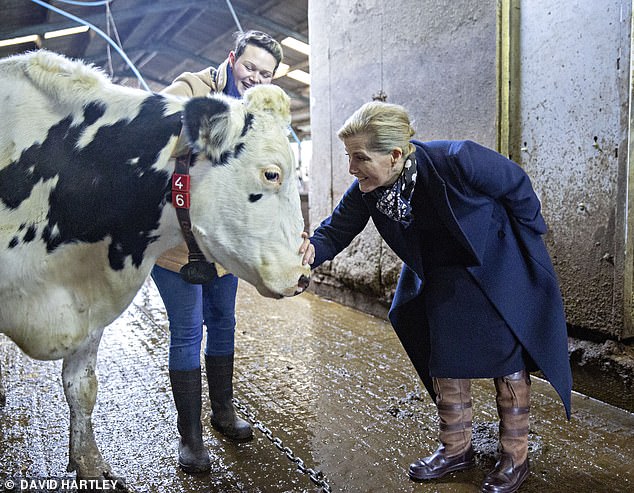 And Sophie showed no fear as she crouched out to meet another cow, crouching down as she greeted the cautious creature

And Sophie showed no fear as she crouched out to meet another cow, crouching down as she greeted the cautious creature.

Later on Sophie was seen walking through the barns as she discovered how the family produce their cheese.

Chatting with the farm owners, she was then pictured admiring the finished goods at the end of her tour of the farm. 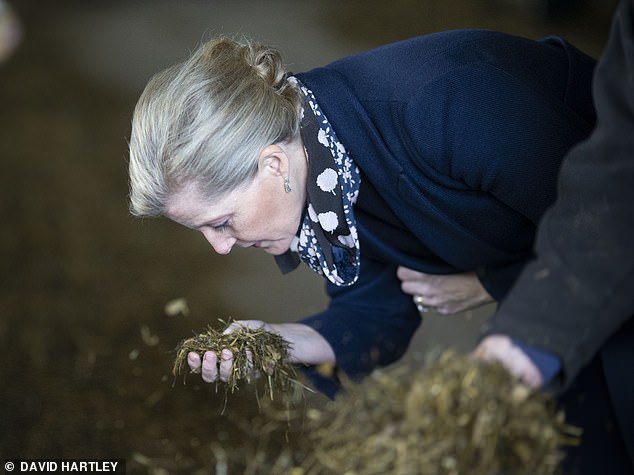 Dressed in sturdy brown boots and a navy ensemble, the Countess was not afraid to get her hands dirty and was even seen picking up handfuls of hay 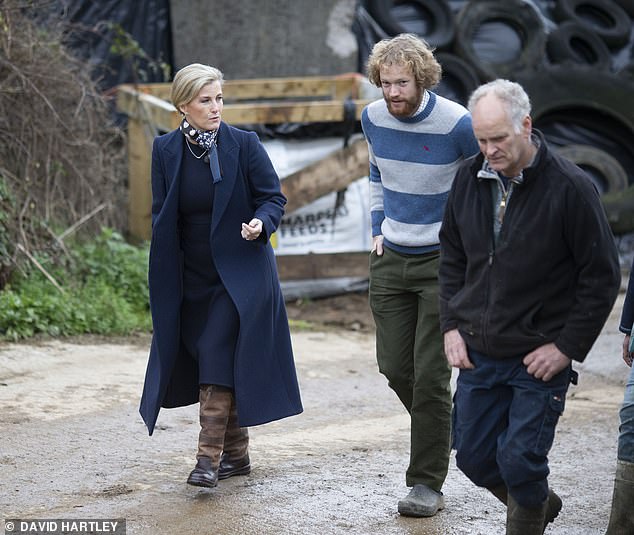 Sophie’s appearance comes amid reports she has been cited as a potential role model to help Meghan Markle navigate the tricky territory of integrating with the royal family.

The Countess of Wessex experienced her own fair share of bad press in her early days.

She continued to work in public relations, following her marriage to Prince Edward in 1999, but things began to unravel following an indiscreet business talk Sophie had with a Middle Eastern man whom she believed was a potential PR client. 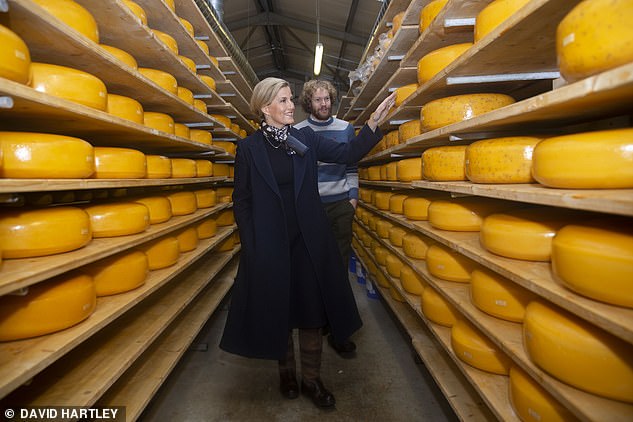 According to The Sunday Times, insiders have been using Sophie as an example of someone who endured a difficult beginning in the royal family, but is now one of its stalwarts after building a close bond with the Queen.

And sources say that the monarch is open to lending her support to pregnant Meghan.

‘Her Majesty has seen it all and could offer the duchess some helpful advice at the moment,’ an insider said.

‘Meghan would do well to nurture that relationship and pop over for the occasional cup of tea with the Queen. That is what Sophie Wessex has quietly done so well.’ 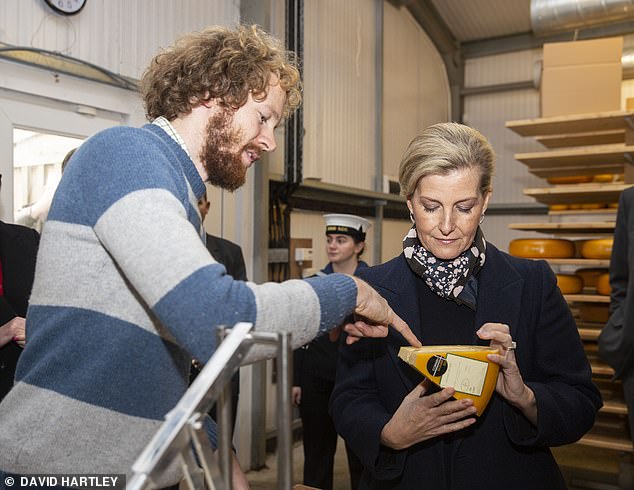 Chatting with the farm owners, Sophie was then pictured admiring the finished goods a the end of her tour of the farm