Melburnians should not be deceived by Wednesday morning's bluebird skies – the city is set for its coldest run of August days in 45 years after an Antarctic blast brought snow to the CBD.

High above Melbourne's empty streets, residents in the upper levels of the Aurora apartment tower at Melbourne Central filmed flurries of snow outside their windows on Tuesday afternoon as the icy polar air hit the city.

"We had reports of snow down to 100 metres elevation … so it makes sense that people in those buildings would have seen some snow from the upper levels," said Bureau of Meteorology duty forecaster Tom Delamotte.

It's been about four years since the bureau fielded calls about snow in the CBD from high-rise residents, he said.

"It usually only happens once a decade. It used to happen more often," Mr Delamotte added.

"We had a very cold air mass move over us yesterday, pretty much straight from Antarctica." 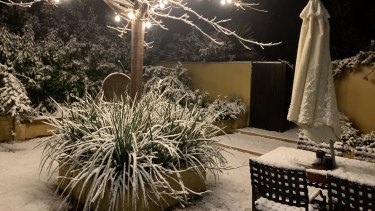 Sassafras in the Dandenong ranges late on Tuesday night.Credit:Georgie Gaudion

Cars in Sunbury, north-west of Melbourne, were covered in snow and there was a dusting of the white stuff in Craigieburn, Greenvale and Dallas as the state shivered through the coldest day of the year on Tuesday.

There was snow in the Dandenong Ranges, which only managed to tap a maximum 3.1 degrees at Ferny Creek, and in other parts of the state, including Colac and Ballarat.

The snow continued to fall throughout the night, making parts of the state a winter wonderland on the second day of stage four coronavirus restrictions.

About the same time, the temperature was 5.1 degrees in Melbourne and 3.1 degrees at Essendon Airport, just before the 8am curfew kicked in.

The snowfall was so heavy in the Yarra Ranges that the Maroondah Highway was blocked in both directions across the Black Spur between Healesville and Narbethong.

The highway remained closed on Wednesday morning, with a significant 90-minute detour via Alexandra and Yea in place for those needing to do essential travel.

Come Wednesday morning, it was minus 4 degrees in Horsham and minus 7 on the snowfields at Mount Hotham and Mount Buller. There was also a fresh dump of snow on the slopes but with regional Victoria under stage three restrictions there will be few skiers out to enjoy it.

Falls Creek and Mount Hotham ski resorts have closed for the year.

“We are disappointed to mark the end of the season this way and extend our gratitude to our teams and the businesses in the local community who all worked incredibly hard to open this winter," said Pete Brulisauer, senior vice president of Vail Resorts Australia.

"We also want to thank our loyal guests for their patience and understanding; we look forward to welcoming them back to our resorts for the 2021 season."

Under stage three restrictions, cross country skiing is permitted for people who live close to an area where this is possible.

Mr Delamotte said Melbourne was set for its coldest run of August days since 1975.

But a similar run of cold days was recorded in July 2015, "when we didn't see a temperature above 12.3 degrees over four days," he said.

"We're going to have a very cold morning, across much of Victoria, on Thursday morning.

"As we move into Friday, we're going to see some rain come down from NSW … which should reach the Melbourne area in the evening." 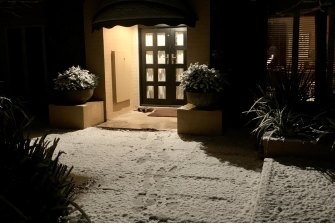 Snow in the Dandenong ranges on Tuesday night.Credit:Georgie Gaudion

The blue skies over Melbourne on Wednesday morning may have lured unsuspecting residents outside for their hour of permitted daily exercise under stage four restrictions, but in Essendon, the "feels like" temperature (which takes the wind chill into account) was just 2 degrees at 10am.

The mercury will struggle to rise above 11 degrees on Wednesday and Thursday, and 12 degrees on Friday, according to the bureau's forecast.

The Bureau of Meteorology measures the ambient, or air, temperature using thermometers shielded from sun and wind. Ambient temperature doesn’t take into account wind chill, where wind strips a layer of warm air from around your body which makes you feel cold; nor does it take into account humidity, which makes it harder for sweat to evaporate from your body so you feel hot. So the Bureau then takes into account these factors by calculating a Steadman Apparent Temperature, which is based on a mathematical model of an adult walking outdoors in the shade. If you combine the effects of humidity, wind chill and ambient temperature on the comfort levels of that adult, you’d get the Steadman, or feels like, temperature. What this doesn’t take into account is the effect of direct sun. So if it’s a really hot day and you’re out of the shade, bump up the dial on feels like for an indication of your projected comfort levels.