It’s here. The once most-followed person on Instagram’s Best Nine has arrived, you guys. Selena Gomez was dethroned as the most followed person by athlete Christian Ronaldo by a few thousand followers, but I don’t care. The OG Queen of Insta will always be Selena Gomez in my heart. This year, Selena Gomez’s 2018 Best Nine will teach you all about the art of the selfie, because let’s get real — no one loves anything more than a photo of a celebrity picture that they took themselves. Something about selfies is so much more intimate than professional pictures taken by paid photographers, and it makes total sense that Gomez’ top nine would include so many.

To begin, let’s first take a look at Gomez and her relationship with social media. The "Bad Liar" singer has always had a love/hate relationship with being online. She’s always seemingly conflicted between wanting to remain transparent and authentic with her audience and wanting to protect her privacy. She’s jumped on and off of Instagram in the past, most recently departing in September of 2018. But, that wasn’t before she locked and loaded plenty of pics for followers to swoon over during the rest of the year.

Here’s a quick look at her most liked images from 2018: 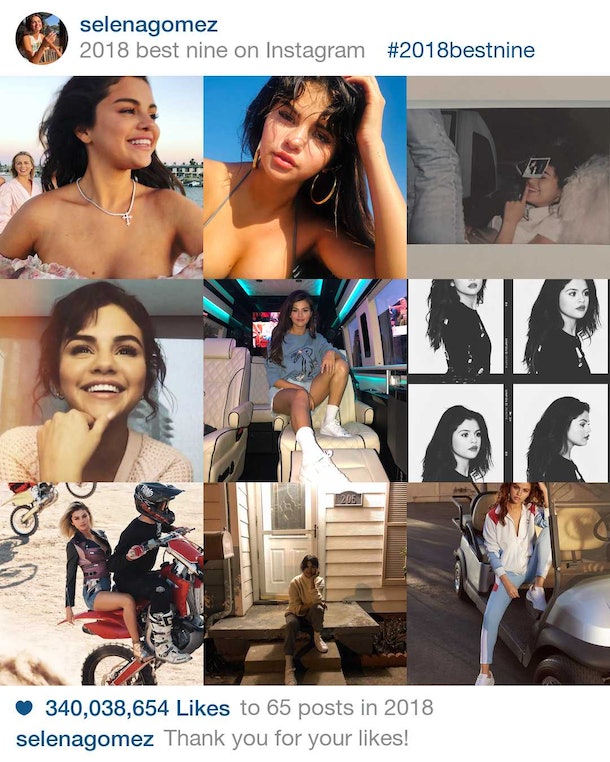 OK. Let’s break this down.

For the second most followed person on Instagram, Gomez really posted a small number of photos. In all of 2018, she only shared 65 pictures, which is just over one picture a week. That number earned her 340,038,654 likes as of Dec. 27, which is a very small percentage of her 144 million followers.

For perspective, another Queen of Instagram, Kim Kardashian, racked in over 1 billion likes on 593 photos as of Dec. 17, and she has 20 million fewer followers than Gomez. All of this to say: Selenators are here for their girl no matter how much she shares with them.

Her recent Instagram-departure message to her fans is actually the first photo in her Best Nine collage. The picture shows Gomez with a beaming smile and the following note:

Mood lol (I was looking at myself in the mirror -like an idiot!) Update: taking a social media break. Again. As much as I am grateful for the voice that social media gives each of us, I am equally grateful to be able to step back and live my life present to the moment I have been given. Kindness and encouragement only for a bit! Just remember- negative comments can hurt anybody’s feelings. Obvi.

Gomez did surface on her friends’ accounts recently after enjoying a day snow tubing with her Wizards of Waverly Place co-star, Bailee Madison. She can also be seen on Puma’s Instagram account where she is promoting her Strong Girl collaboration line, SGxPuma.

With any luck, Selenators will catch more of their favorite star in the New Year, but can continue to enjoy these awesome selfies (plus one little Coach promo pic) in the meantime.