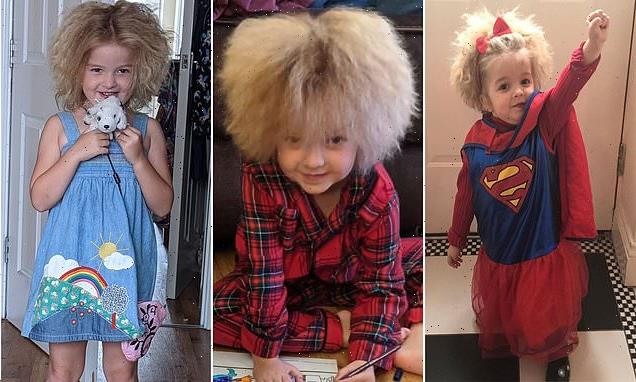 Schoolgirl, 6, who has the same uncombable hair as Albert Einstein, has to bat off strangers who want to touch her frizzy locks or call her untidy

A schoolgirl with the same ultra-rare condition as Albert Einstein that leaves her hair impossible to tame has been taught by her parents to bat off strangers who are ‘always trying to grab’ her strikingly frizzy locks.

Six-year-old Florence Patterson, from Newcastle, has had fuzzy hair since she was a tot due to a rare disorder called Uncombable Hair Syndrome, which means it can’t be combed flat.

The syndrome is so rare it only affects around 100 people across the globe at any one time, and was responsible for Albert Einstein’s famous mop.

Florence’s parents Jill Peddie-Jones, 43, and Kyle Patteson, 49, say they have to face rude comments from strangers who have been heard exclaiming ‘look at the state of that child’ – without thinking that it is a medical condition.

Some even try to grab and touch little Florence’s hair for themselves without asking – forcing her mum and dad to urge her to ‘tell them off’.

However Jill and Kyle are teaching Florence to embrace her bushy mane and adorable photos show the youngster proudly showing off her luscious locks in her uniform on her first day back at school. 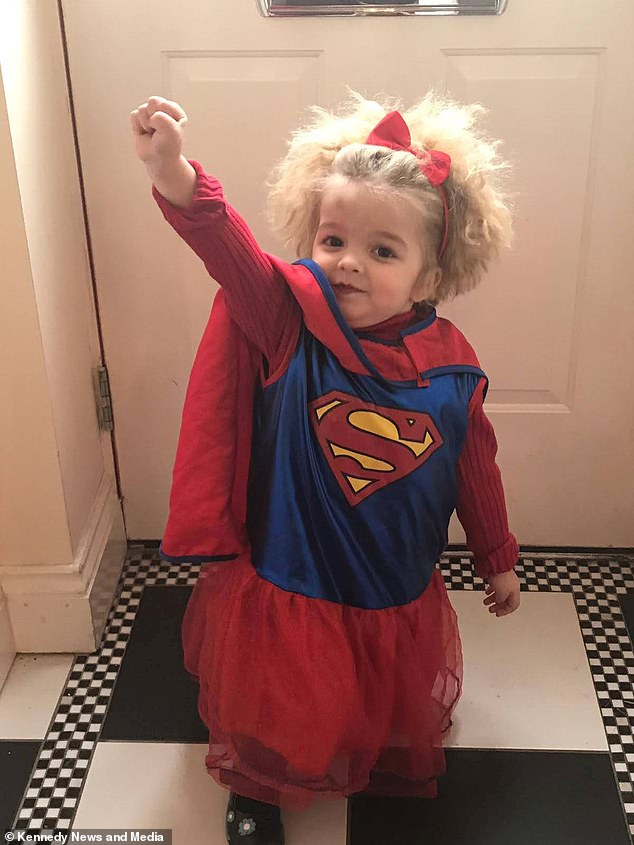 Florence Patterson, six, from Newcastle, was born with Uncombable Hair Syndrome. The condition means her locks cannot be combed flat

Jill, who works as a consultant, said: ‘Florence is aware that everyone stares at her.

‘Strangers touch her or grab her hair so we’ve taught her to tell them off and tell people that they can’t touch her.

‘It’s been pointed out that her hair is similar to Einstein’s.

‘We get quite a lot of derogatory comments about how we should have brushed her hair or comments like “look at the state of that child”. 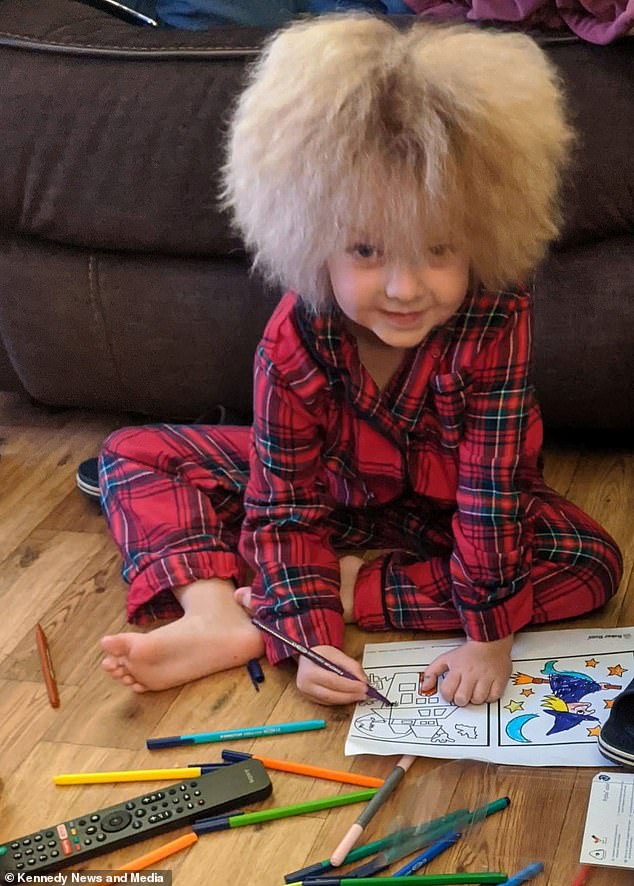 Florence’s mother Jill Patterson said she’s had to teach her daughter, pictured, to fend off strangers’ unwanted remarks and attention

Uncombable Hair Syndrome: The condition that was made famous by Albert Einstein

Uncombable hair syndrome is a rare inherited disorder that causes locks to stand up from the roots and not be flattened.

Such hair is usually silvery-blond or straw colored.

The hair usually appears between three and 12 months of age.

In rare cases, the syndrome has occurred alongside bone and eye abnormalities.

The syndrome usually resolves or improves at the onset of puberty.

It may be more manageable through applying conditioners and using soft brushes.

‘It does make you angry, but you have to walk away.

‘It was strange after lockdown, when we started going out again, because I had forgotten how much attention she gets.

‘Wherever we go, people walk past with their mouths wide open.

‘We do get nice comments as well but most of the negative attention she gets is from adults, they aren’t as accepting as kids.

‘Everyone in the area knows her as the baby with the hair.’

Lawyer Kyle added: ‘Florence is confident, that’s how we’ve brought her up.

‘She’s always attracting attention whether it’s wanted or unwanted so she needs to be prepared for that in later life.

‘We don’t want it to define her but we know that some people will define her by her hair so she just need to embrace it.

Her father says trying to run a comb through Florence’s hair is impossible but the family have found their own way of managing it.

Kyle said: ‘[Combing her hair] is impossible to do.

‘We’ve found our own way to manage it which is to wash it in the bath, not in the shower because it doesn’t soak up water and will stay bone dry, towel dry it, leave the conditioner in, scrunch it and pick out all of the dreadlocks which takes ages but the next day she’ll have the most fabulous, blonde curls. 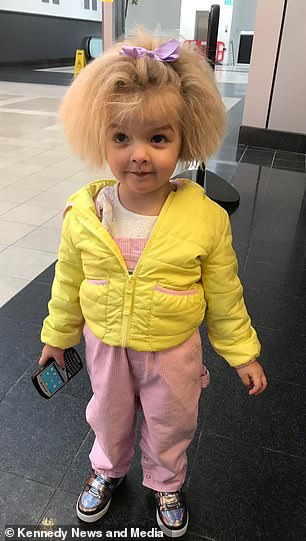 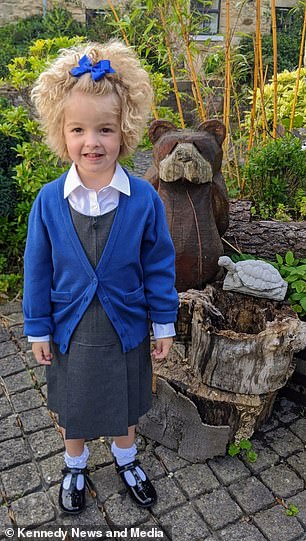 Styling Florence’s hair is an everyday challenge for Jill, but she said her six-year-old was growing confident, and proudly posed in her school uniform ahead of the new term, right 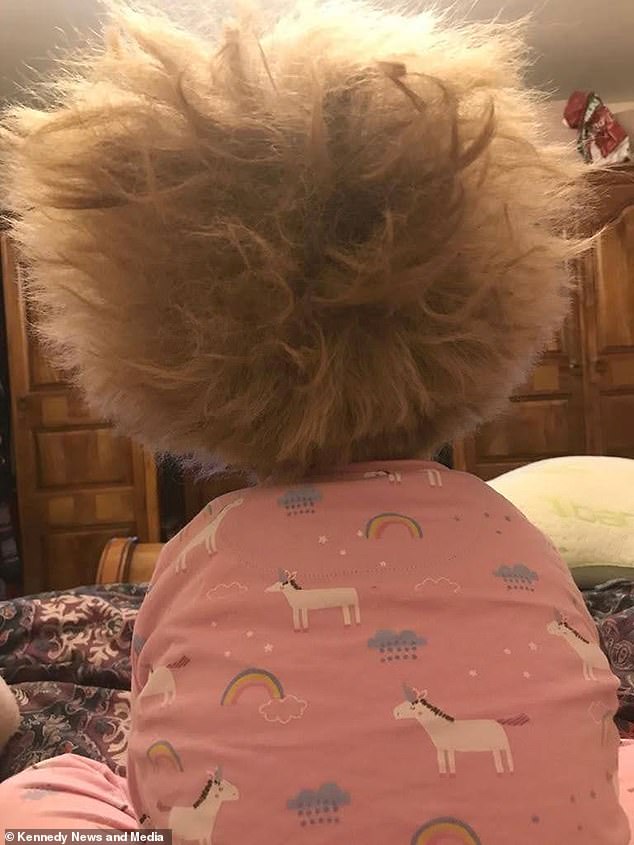 The six-year-old’s mane is bushy and knotty, and in spite of Jill’s best efforts, it had never been tamed 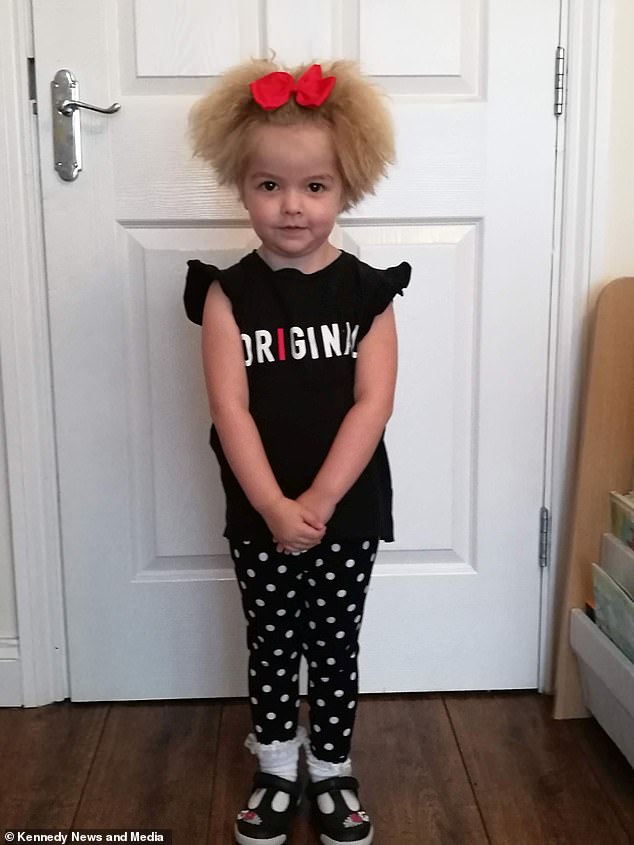 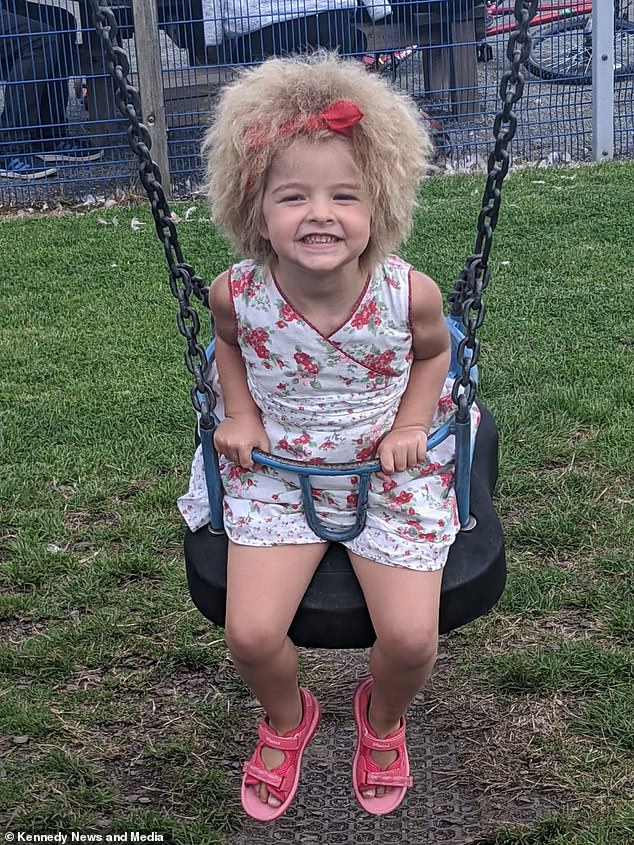 ‘Then the next day it’s frizzy again.

‘If you try to manage it in a way that you’d manage normal hair, you’re fighting a losing battle.

‘We’ve also been advised not to do that because her hair just comes out and it’s very uncomfortable for her.

‘The condition also makes her nails grow incredibly fast. We have to trim them once or twice a week.’

Florence has had frizzy hair since she was one but she was diagnosed when she turned three after it was spotted by a doctor who thought the cause could be something more serious. 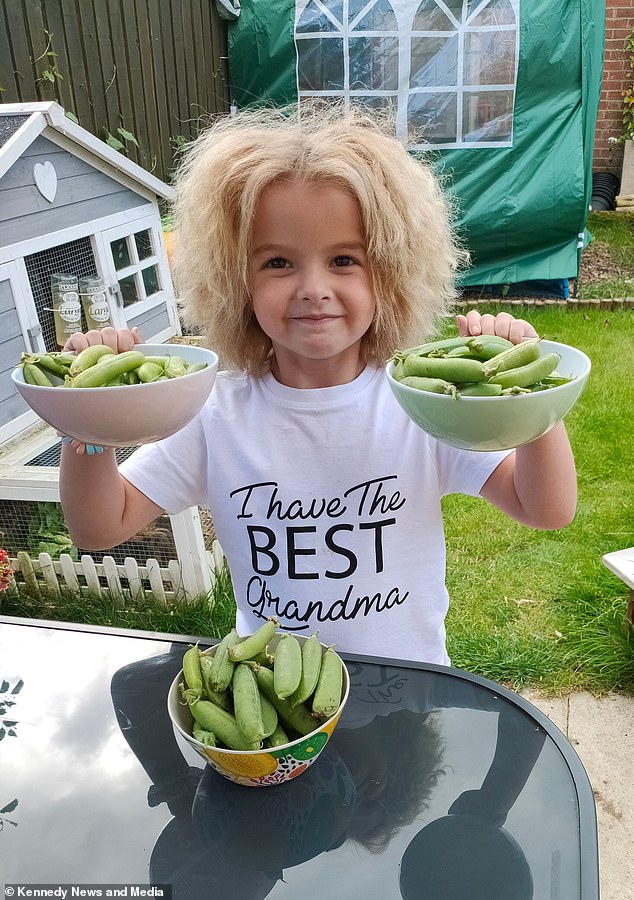 The six-year-old proudly showing off bowls filled with green peas. Her family noticed there was something different about her hair when she was three 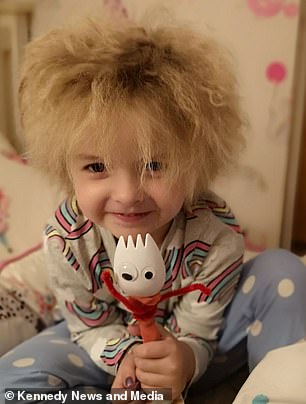 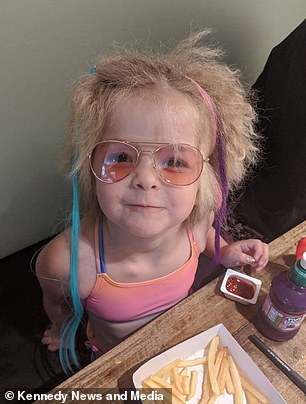 Jill took Florence, pictured, to the GP when she was a toddler, and she was diagnosed with the condition. 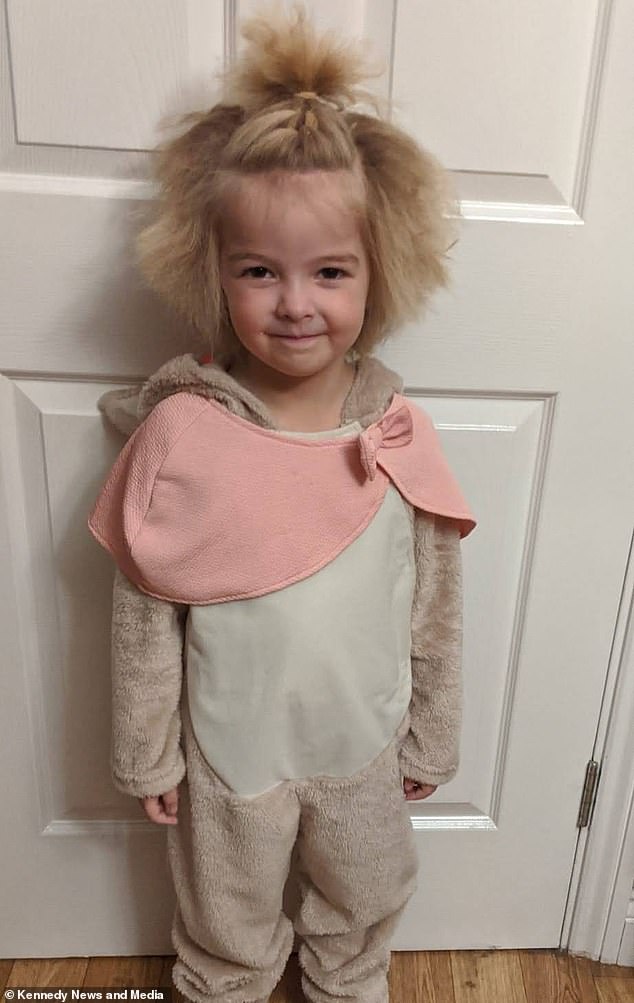 Jill was advised not to treat Florence’s hair like normal hair, because it can be painful for the six-year-old 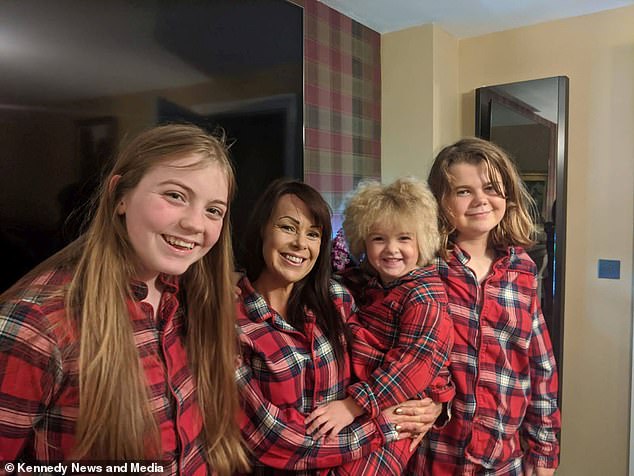 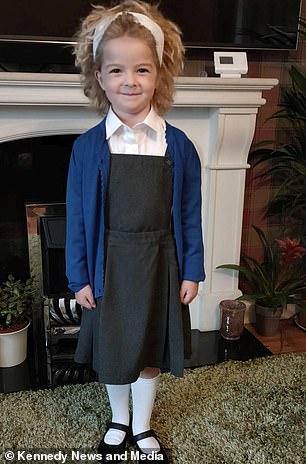 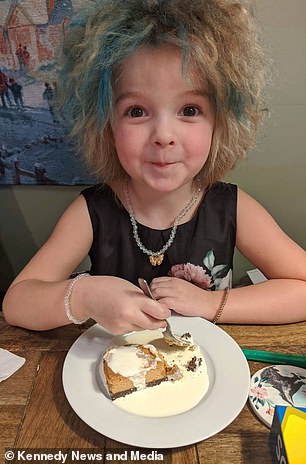 Pictured left: Florence in her school uniform. Right; the six-year-old with temporary dye in her hair

Jill said: ‘We noticed quite early on that her hair was unusual, probably when she was around one but we just thought it was funny.

‘When she was about three, we were selling a table on Gumtree and the man who came to pick it up was a GP and he suggested that we take her to a doctor to get checked out.

‘He thought she had a different syndrome so he thought it was important to get her heart and eyes checked but she was diagnosed with Uncombable Hair Syndrome which just affects her hair and nails.’

Kyle added: ‘Her hair doesn’t grow that fast but its very thick, which makes her overheat.

‘It wasn’t noticeable when she was born but when she was about one, it started sticking up in different directions.

‘It was just part of her personality.

‘Luckily Florence’s condition isn’t more serious but if there are parents out there thinking their child might have the condition they should go to the GP because it could be something more serious.’ 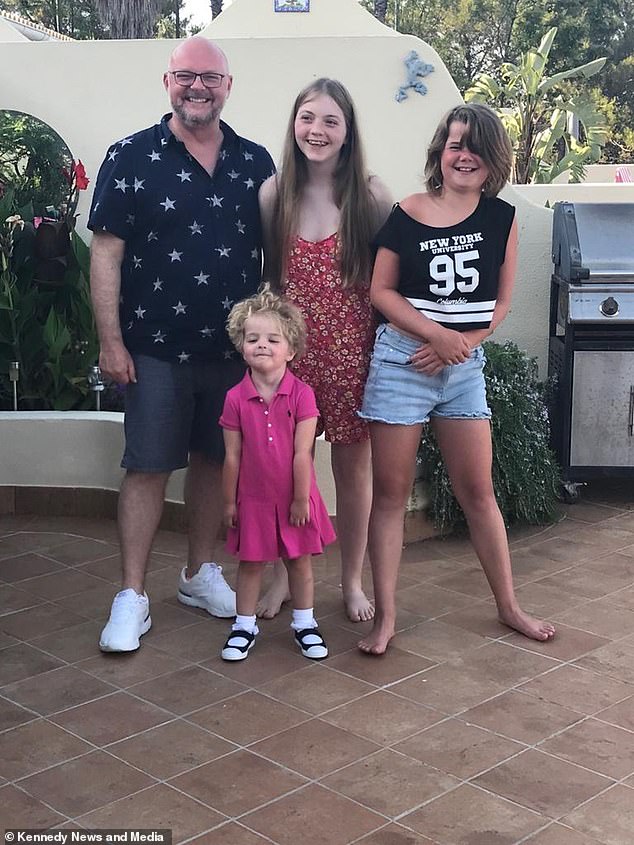 Florence’s father Kyle, 49, left, with Jill, Amelia and Heidi, pictured with the six-year-old. Kyle said the family have found their own way to manage Florence’s hair 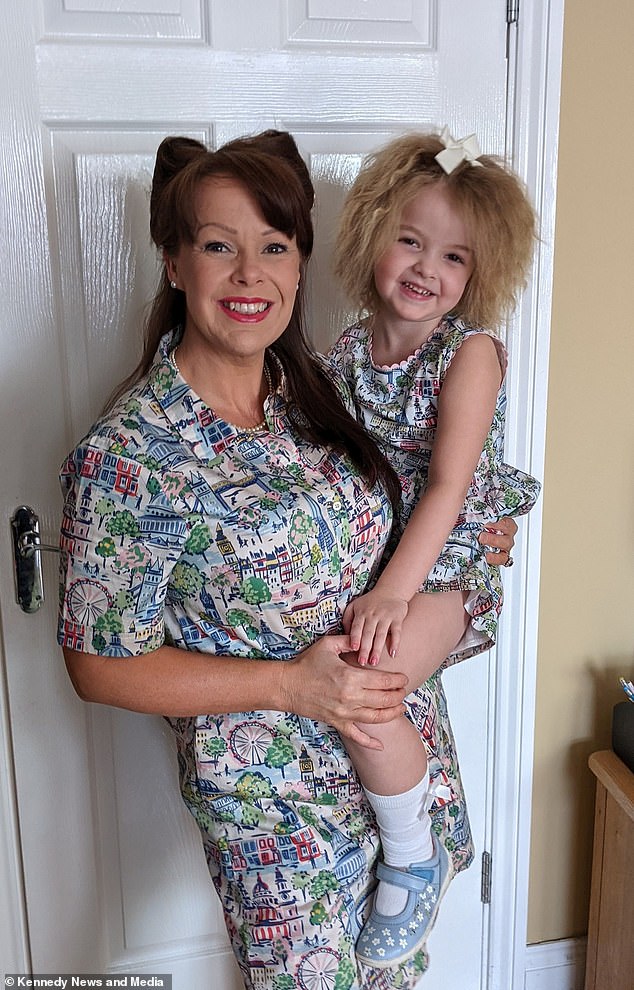 Jill, pictured in matching outfits with Florence, and Kyle wash Florence’s hair in the bath, then towel dry it, leave conditioner in, scrunch it and pick out all the dreadlocks to give Florence ‘fabulous’ hair 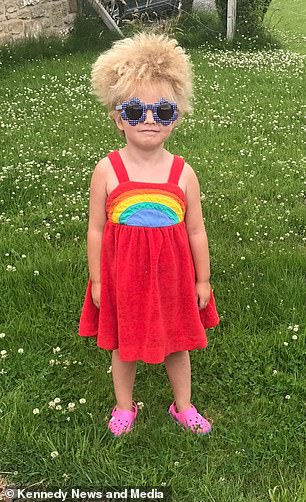 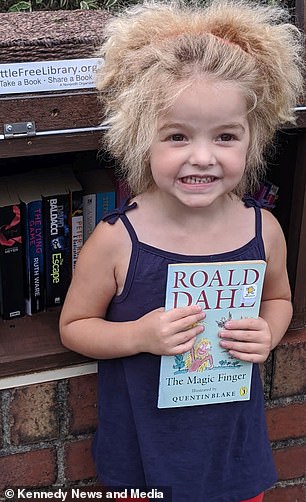 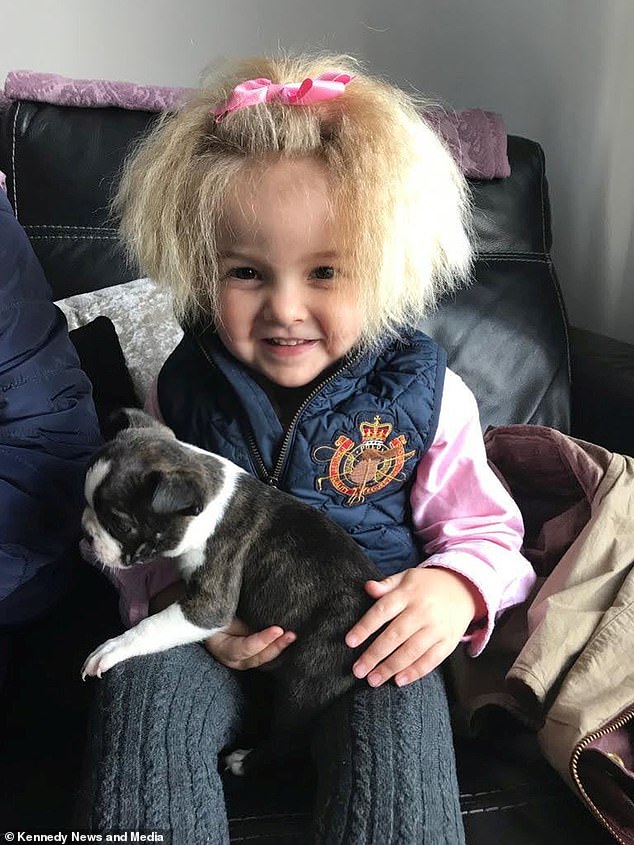 Florence, pictured with her family’s puppy. The parents can spend hours styling her hair, only for it to be frizzy again the next day