Lesson in love! Caretaker marries in front of 500 pupils, teachers and parents at the primary school where she’s worked for 27 years

A primary school caretaker had a very special wedding – after walking down the aisle in her school in front of 500 children.

Cindy Cassin, 57, from Erdington, Birmingham, was over the moon when her entire school agreed to partake in her church wedding ceremony to her partner, Dave, 62.

Cindy’s dad, Ray Gaunt, 74, walked her down the aisle, and her reception, which included cake cutting and her first dance was held on the school field.

The pupils at Saint Barnabas Church of England Primary School, Erdington, West Midlands, had been helping to plan Cindy’s wedding since the start of the year after their deputy head teacher, Jenny Arnold, proposed the idea. 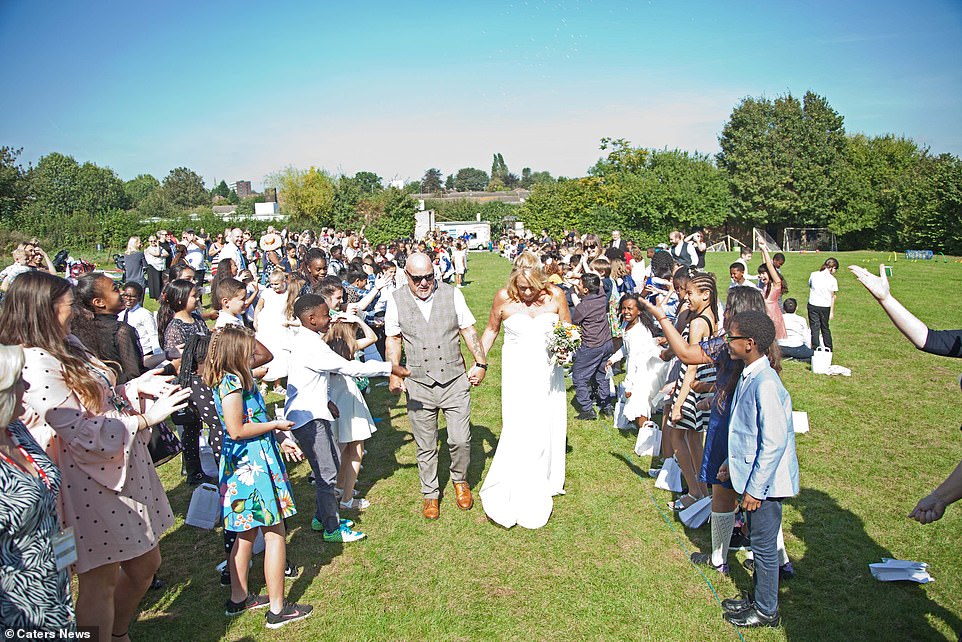 School caretaker Cindy Cassin, from Erdington, tied the knot on Friday in front of 450 pupils, their teachers and parents at Saint Barnabas Church of England Primary School. Pictured after the ceremony with her husband Dave 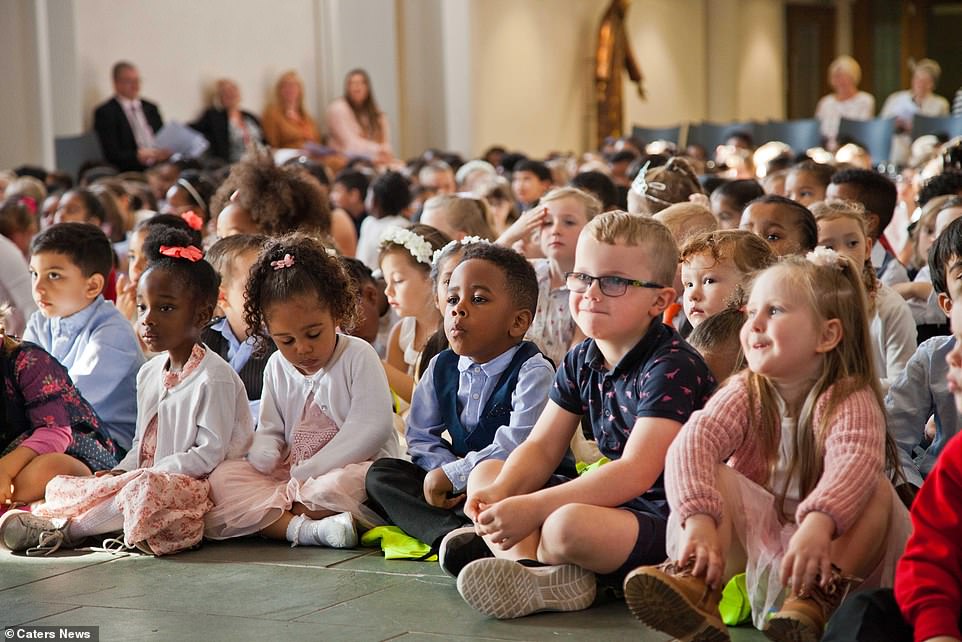 The pupils helped plan the wedding since the start of term and even made small presents for Cindy and her beau, Dave, 62 and party favours

Cindy, who has worked at the school for 27 years, said: ‘I was really nervous about getting married in front of so many people.

‘I don’t like all the attention being on me, but it was such a special day for everyone.

‘The whole school got involved, one of the parents baked 450 cup cakes and another created my wedding cake.

‘It was lovely to see the children so excited on the run up to our wedding day. 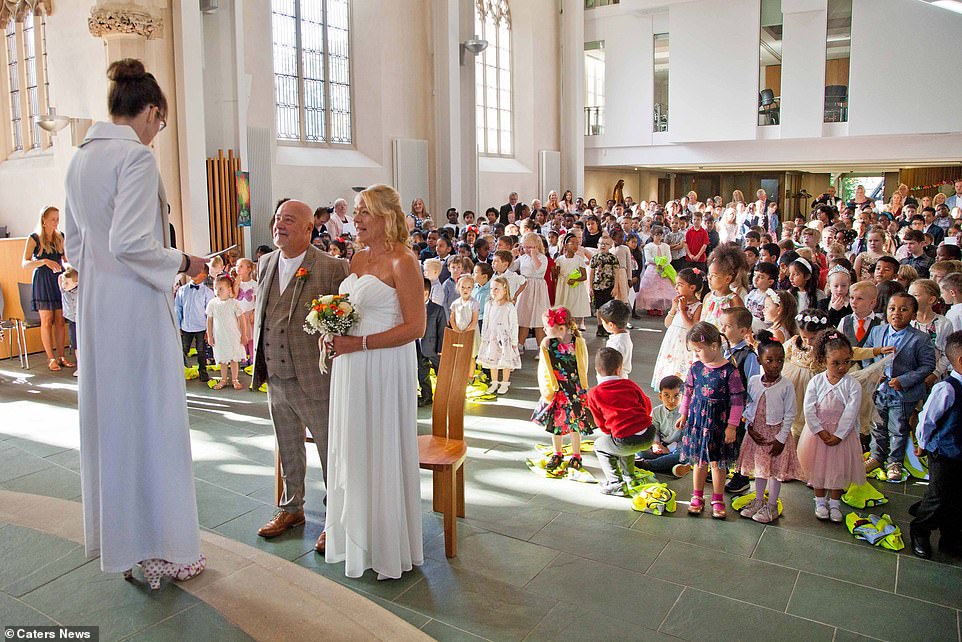 Cindy and Dave during their wedding ceremony on Friday 20th September. The pupil stood quietly in the church during the joyous affair 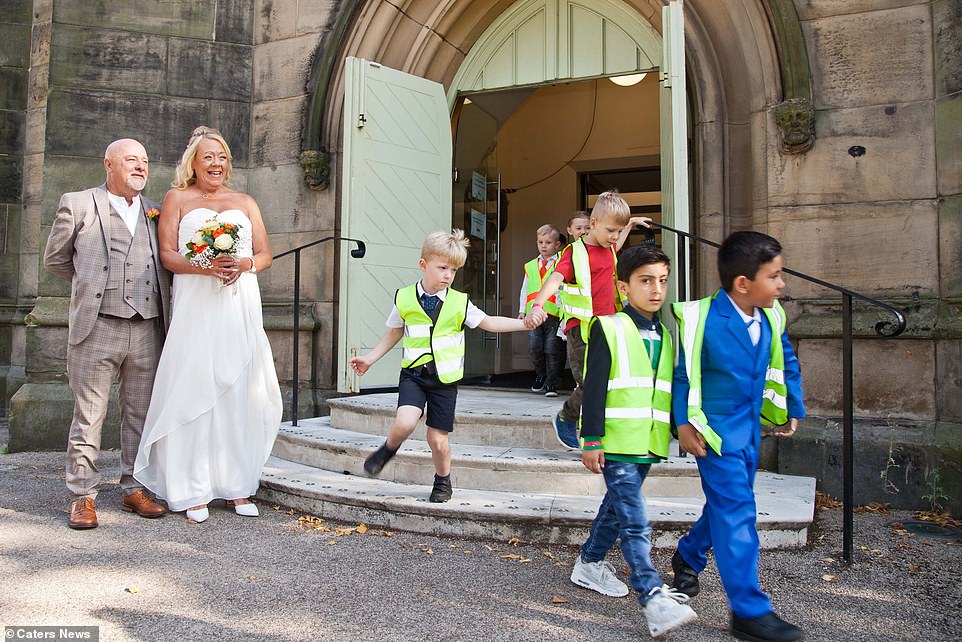 ‘They’d all created little gifts to present to us at the reception as well, it was adorable.’

Dave and Cindy first met in 1979, the pair had a ceremony abroad before their big day at Saint Barnabas Church of England Primary School.

Cindy added: ‘We went to Zante with 30 of our closest friends and family on August 22.

‘But I was more nervous for our school wedding as it was huge in comparison.. The ceremony was held at Saint Barnabas Church before the reception at the school. 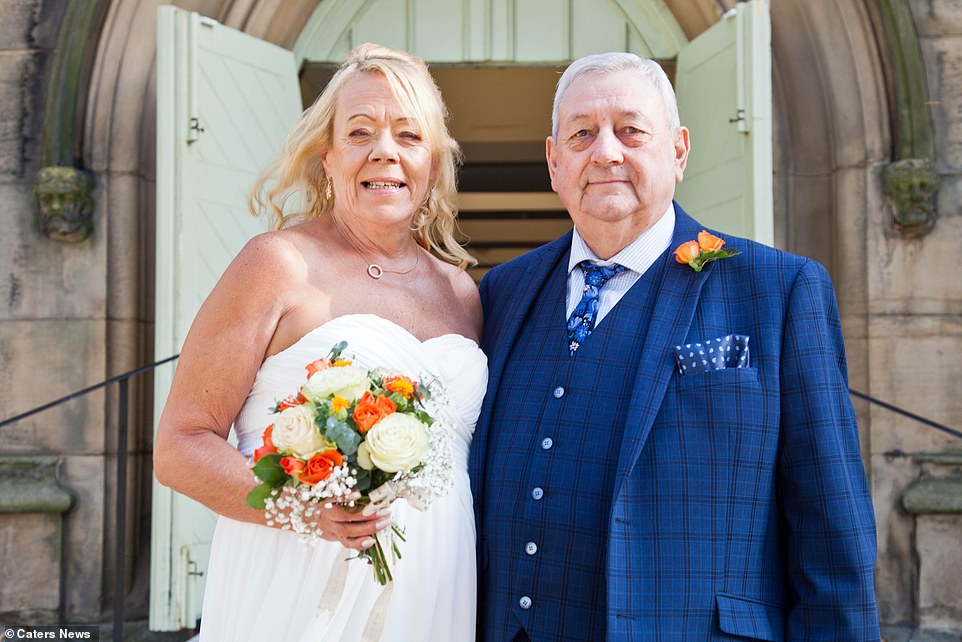 Cindy was walked down the aisle by her father Ray Gaunt (pictured) on her special day. The wedding ceremony took place in the school’s church 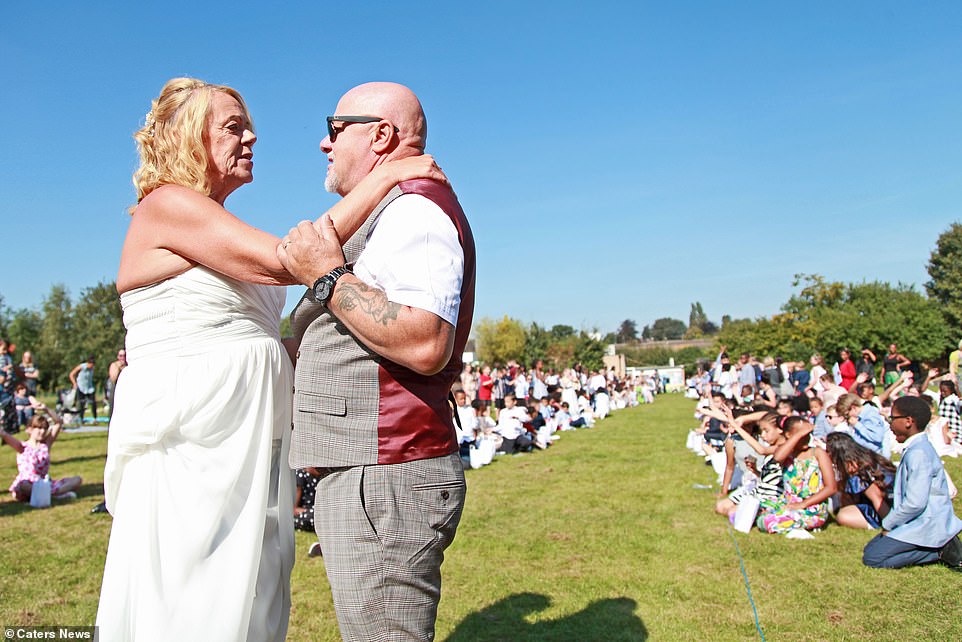 Cindy and Dave embraced in front of the pupil on Friday after their wedding. The woman said her wedding felt ‘amazing’ 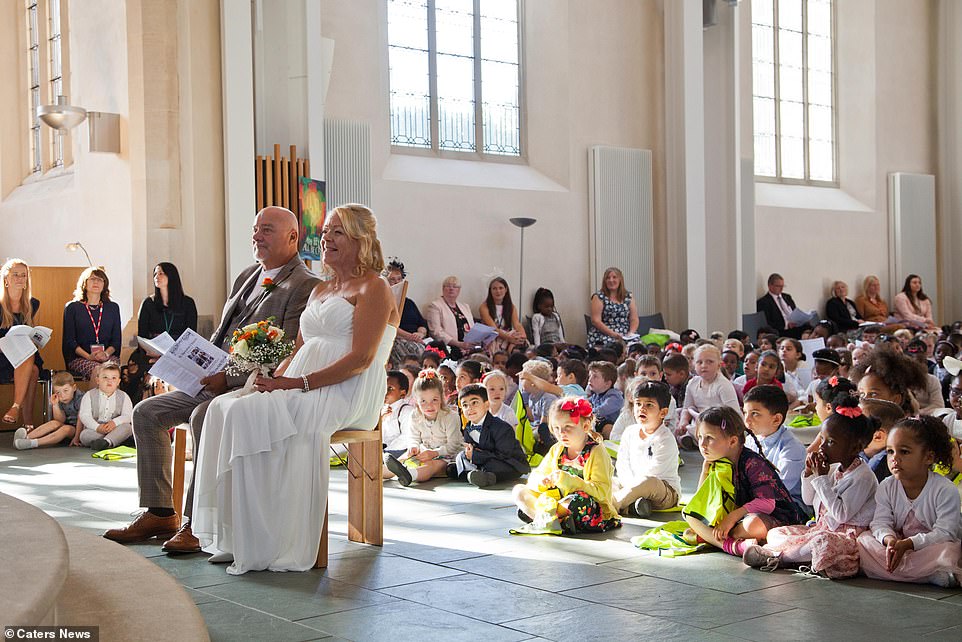 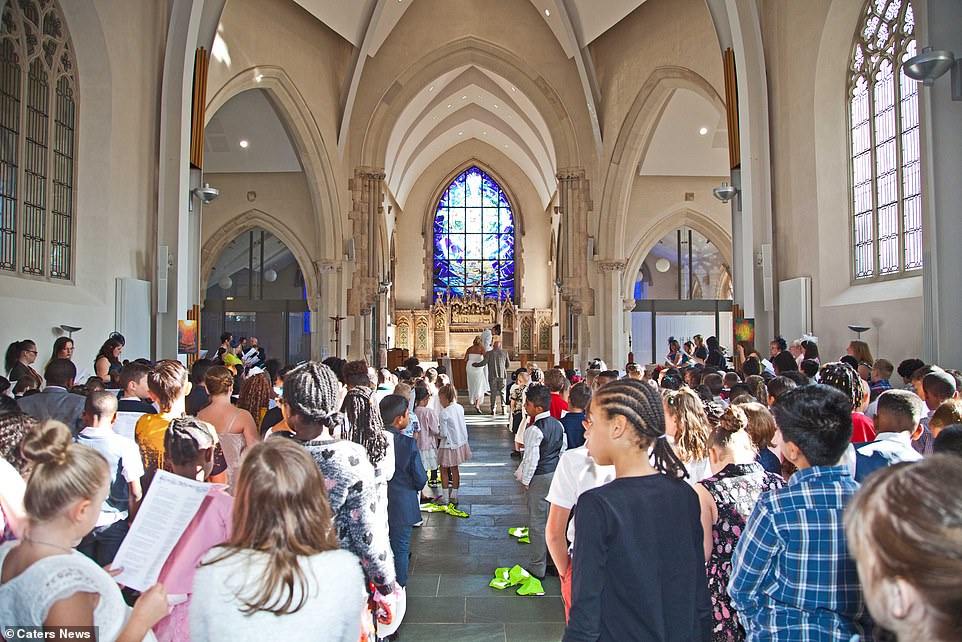 ‘I wore the same white long dress to both and Samantha Jayne Hair curled my hair and I also had my make-up professionally done. I felt amazing.

‘It was such a great day and so special to share it all with the school as they’re like family to me.

‘I was really nervous before the school wedding but it really was one of the best days of our lives.’

Deputy head teacher, Jenny Arnold, added: ‘Since we began planning this day at the start of the year it has just got bigger and bigger. 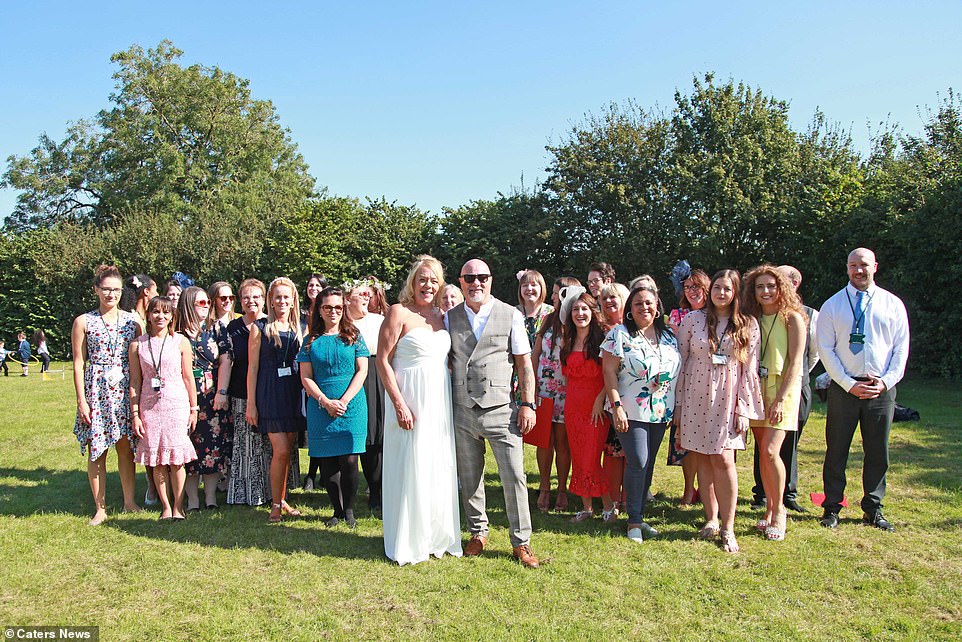 Cindy and Dave had a modest gathering in Zante on August 22 with 50 family and friends. Pictured last Friday with their school’s staff 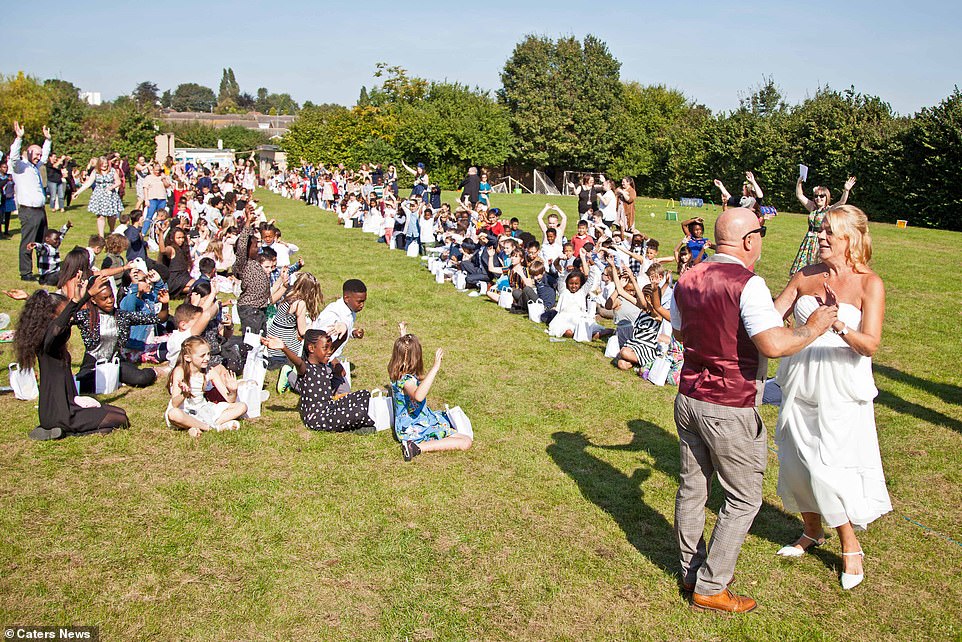 The couple danced in the sun in front of the children, which had formed a neat line on the school grounds to enjoy their packed lunches 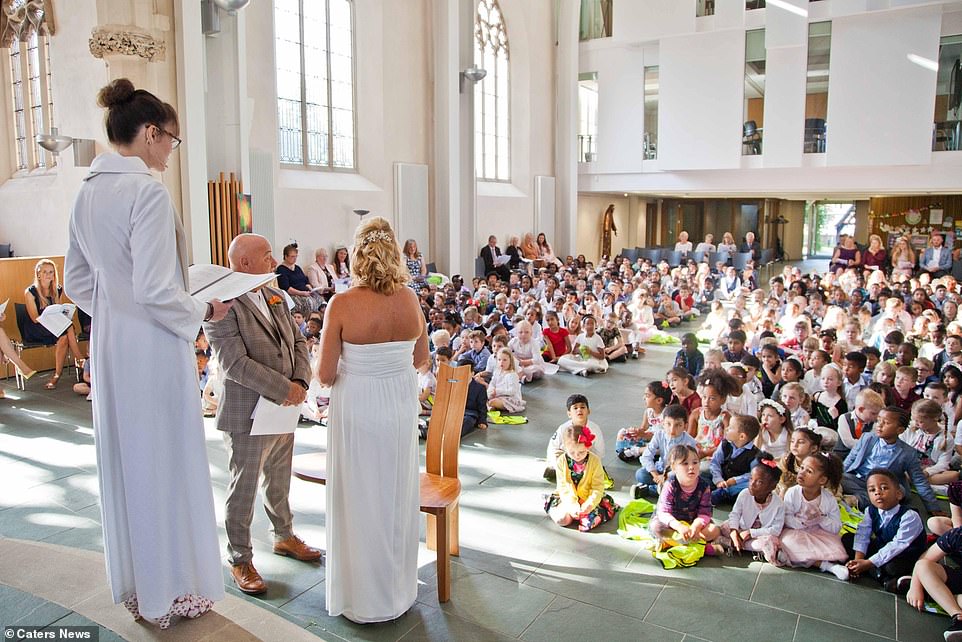 Cindy and Dave looked at the pupils gathered in the church during the ceremony. Seating had to be reduced so that the children could all attend 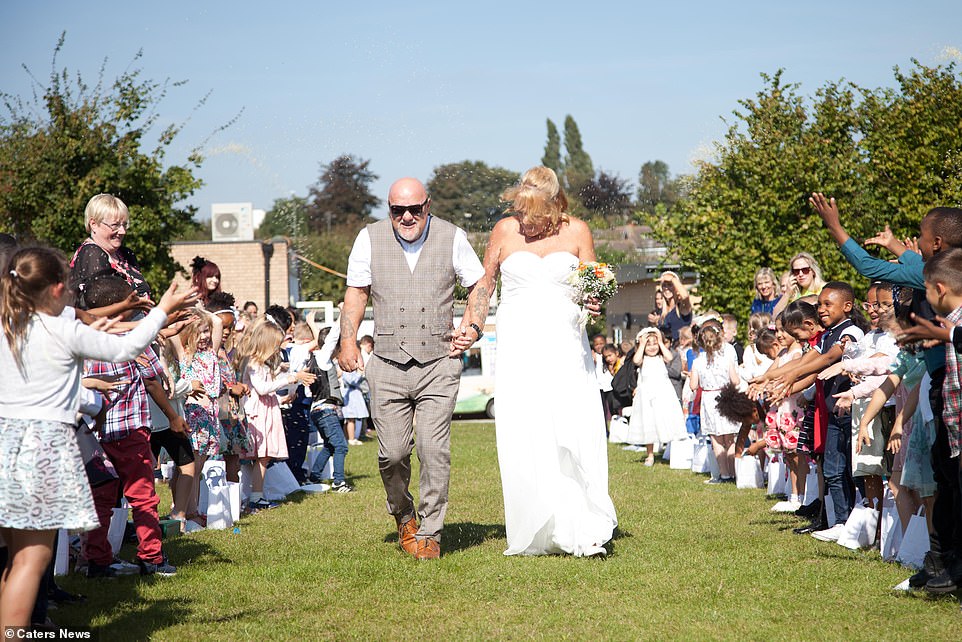 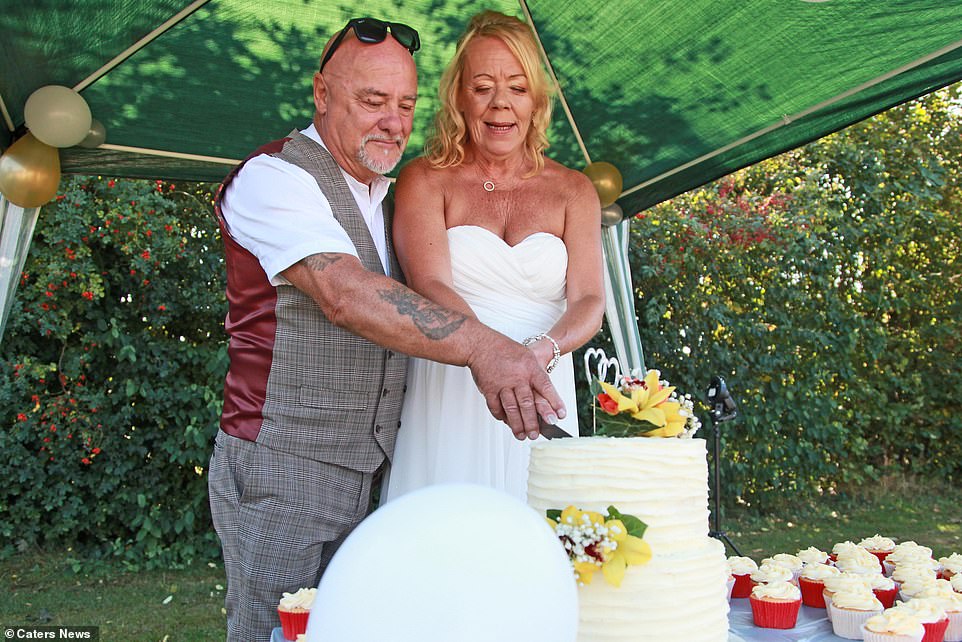 Parents of the pupils united to bake 450 cupcakes, and another parent baked the wedding cake (pictured) for Cindy’s special day

‘The children have all been so excited and we think it’s really important to allow them to enjoy life experiences as part of the curriculum.

‘Cindy is an amazing asset to our school as she always goes above and beyond at any opportunity. 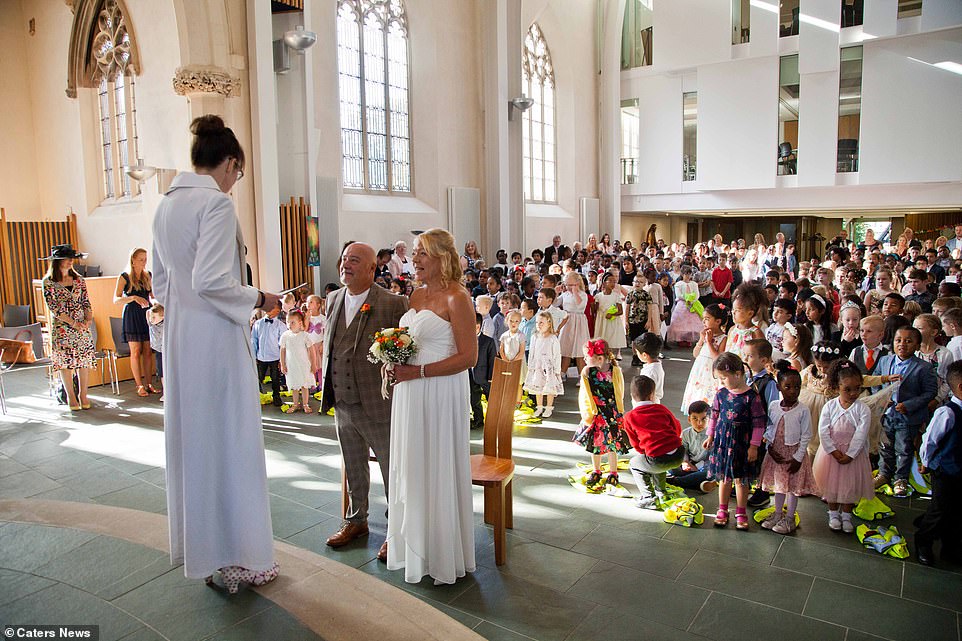 Happy couple: Dave and Cindy beamed during the ceremony. Dave doesn’t work at the school, but is always happy to help Cindy when needed

‘Her husband, Dave, doesn’t work at the school but he’s always keen to help Cindy when needed.

‘The children made good luck favours for the newlyweds before the wedding reception took place at 1pm.

‘We had afternoon tea on the field and it really was a day we’ll remember forever.’ 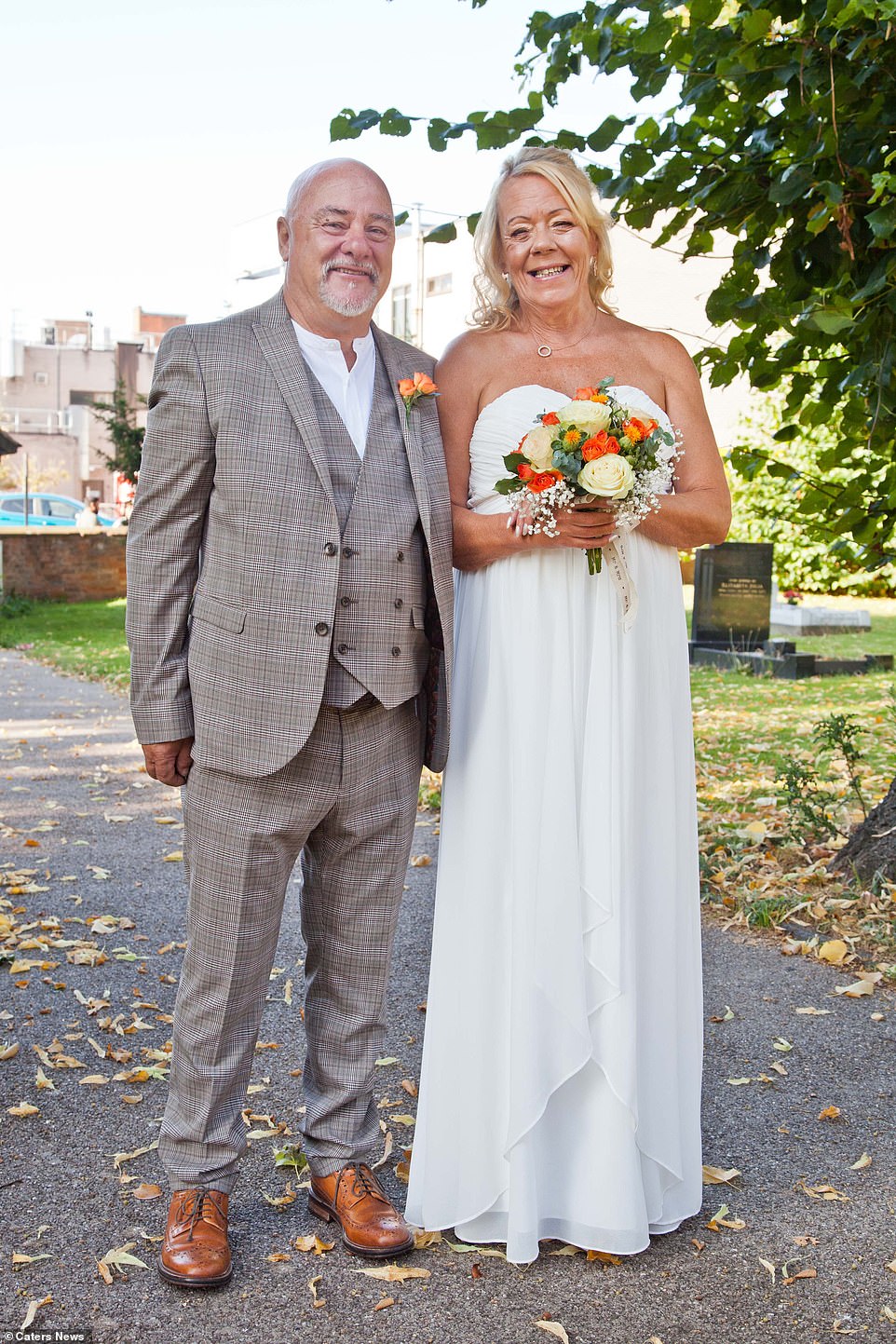 The blushing bride and her groom. Cindy and Dave beamed on their special day, which was organised with the help of the whole school, pupils and their families 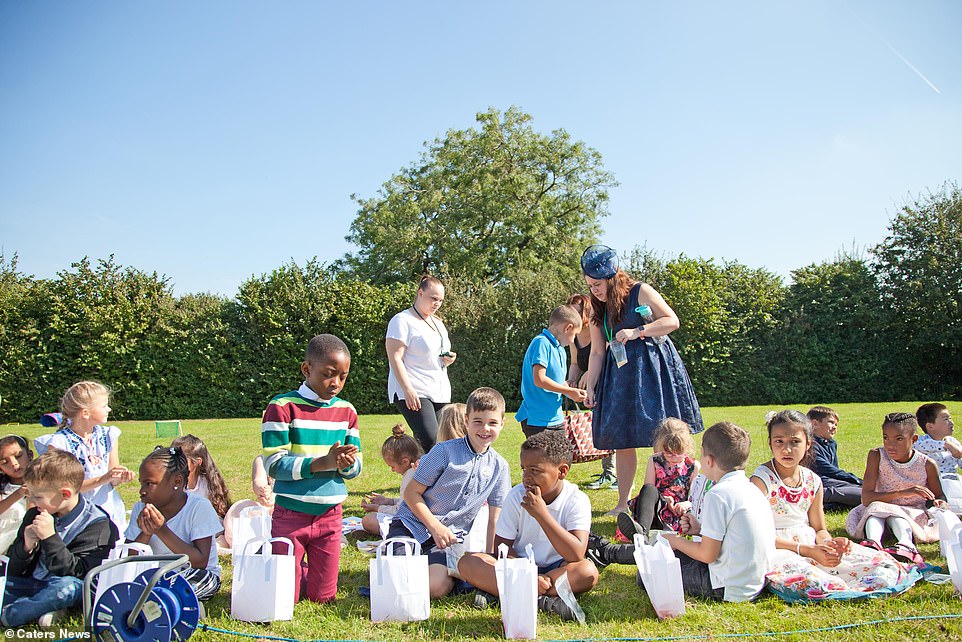 The children enjoyed a packed lunch in the school field on Friday after Cindy’s wedding. Nearly 450 children, families and teachers were present 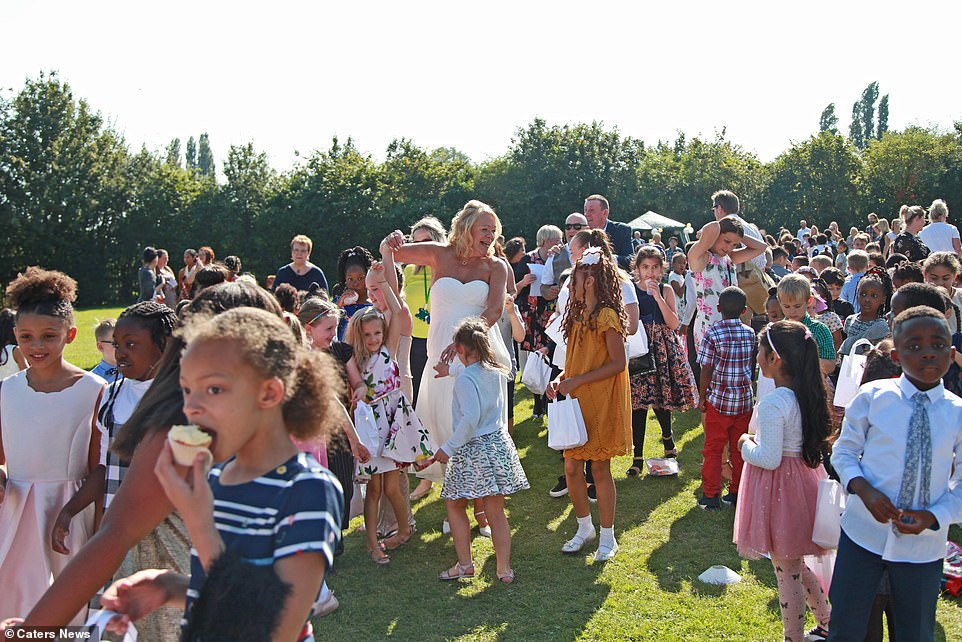 The school’s deputy head teacher, Jenny Arnold proposed the idea and said it was important that the pupils learned life experiences as well as their curriculum (children dancing with Cindy during the ceremony) 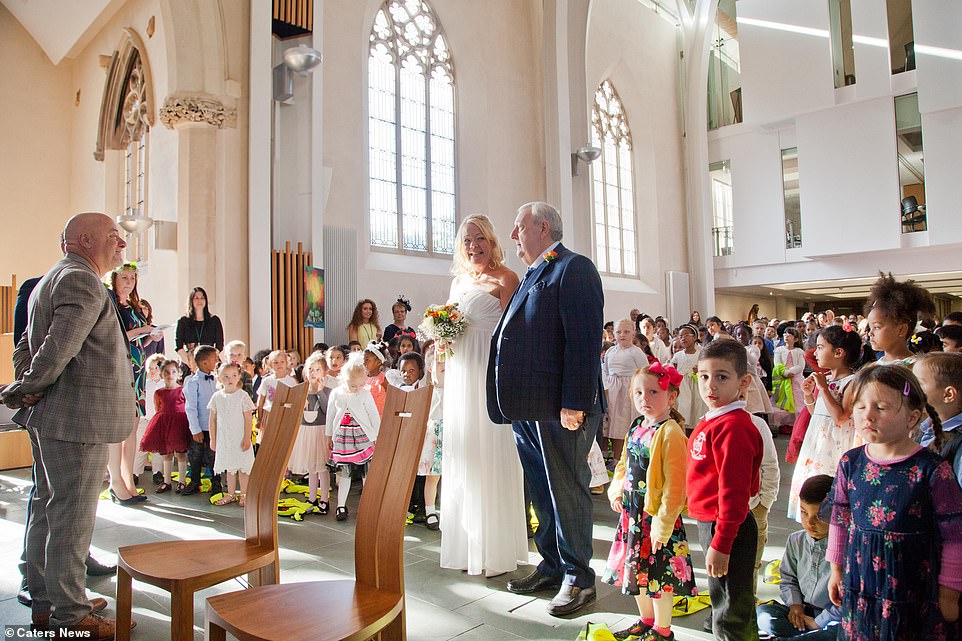 Dave smiled as Cindy arrived at the aisle at the arm of her father Ray. The pupils looked on, some wearing their best dresses for the occasion