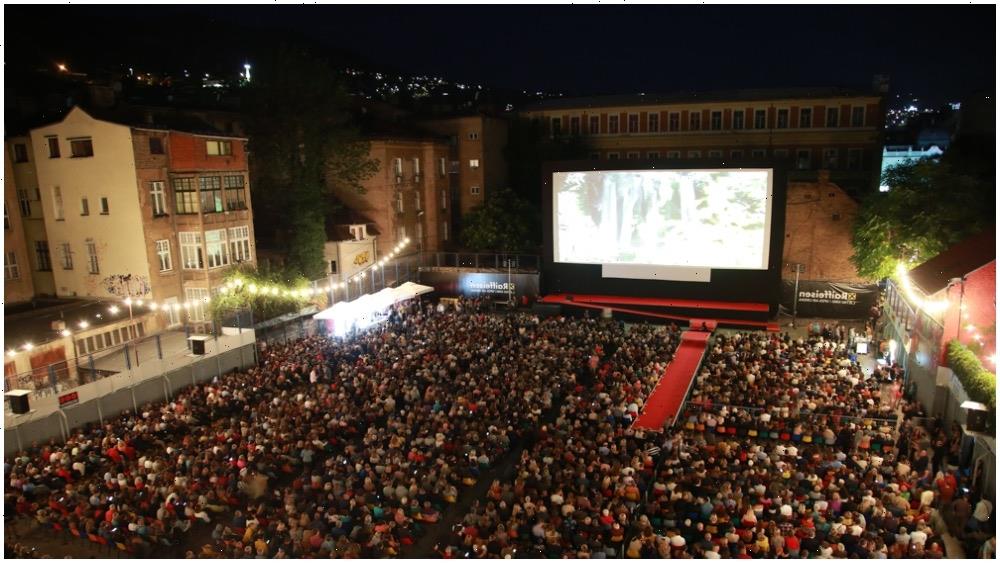 When the first edition of what would become the Sarajevo Film Festival was held in 1995, the Bosnian capital was in the final year of a devastating, four-year siege. Electricity shortages plunged the city into darkness, while food and hard currency were scarce. The inaugural screenings were held in the basement of a bombed-out building – a literal hole-in-the-wall – where tickets could be purchased with cigarettes instead of cash.

The annual event that emerged from the rubble didn’t just contribute to the cultural life of the city. In the early days after the siege, organizers and local clean-up crews got to work around Sarajevo, refurbishing historic buildings that had been destroyed by the shelling and converting them into festival venues. “Everyone who was involved felt that they were contributing to this rebuilding,” says festival director Jovan Marjanović. “The city was almost fully destroyed. And the festival was the place, and this time in the summer, when it would come alive.”

That experience helped to forge a unique relationship between the Sarajevo Film Festival and its host city, born from a resilience that has helped it navigate periods of flux and uncertainty to become the leading audience and industry event in the Balkans.

After two years of slimmed-down editions and pandemic-fueled disruptions, festival leadership expects a robust turn-out on par with the last, record-breaking event in 2019. The festival, which runs Aug. 12-20, kicks off with Palme d’Or winner “Triangle of Sadness,” from Swedish director Ruben Östlund, who will receive an Honorary Heart of Sarajevo Award during the opening ceremony.

Other filmmakers to be honored at this year’s event include U.S. writer and director Paul Schrader, who will present a special screening of his 2021 Venice selection “The Card Counter,” and actor Jesse Eisenberg, in Sarajevo with his directorial debut “When You Finish Saving the World.” Danish actor Mads Mikkelsen will also be feted before a screening of his film “The Hunt,” while Ukrainian documentary filmmaker Sergei Loznitsa will be celebrated with a retrospective of his work.

Among the 51 films competing for Heart of Sarajevo Awards are 20 world and eight international premieres, with half of the eight films in the main competition bowing in the Bosnian capital. They include “A Ballad,” from veteran Bosnian director Aida Begić, whose debut feature “Snow” won the Critics’ Week Grand Prize at Cannes; “Men of Deeds,” the latest from Romania’s Paul Negoescu, director of the hit caper comedy “Two Lottery Tickets”; and feature debuts from Slovenia’s Dominik Mencej (“Riders”) and Hungary’s Noémi Veronika Szakonyi (“Six Weeks”).

Continuity has been a key part of Sarajevo’s staying power: Marjanović was the former head of the festival’s industry department before being promoted to co-director last year, taking the helm when festival director and founder Mirsad Purivatra stepped down in February. Many of the region’s emerging talents have likewise grown with the festival, graduating from its Talents Sarajevo training platform to present their first films in the CineLink Co-Production Market and later walk the red carpet outside the National Theater for their festival premieres.

It’s that deep rootedness in the region that’s helped festival leadership keep pace with the times. Case in point: Sarajevo’s CineLink Industry Days was ahead of the curve when it came to recognizing the potential of Balkan drama, laying the groundwork for an era when global and regional streaming services are jockeying for high-end local content. Six years after launching a co-financing forum for TV projects from the former Yugoslavia, Sarajevo has become the premiere event to pitch, finance and launch dramatic series from the region, with this year’s roster of industry guests including executives from global players Mediawan and Fremantle. “They recognize that we are the place to discover this part of the world,” says industry head Maša Marković.

This year’s event nevertheless proves that the pandemic has left a lasting imprint on how Sarajevo will unfold in the years ahead. After two years of hybrid events, says Marjanović, “We can do some of the things more efficiently. Some of the positive outcomes from these past two years have been integrated in this year’s process. And I think they’re here to stay.” Online tools that made it possible, for example, to host hybrid events during the pandemic will allow Ukrainian filmmakers to participate in this year’s festival despite the ongoing Russian war.

The return of audiences to sold-out cinemas after two years of COVID-19 fatigue, however, will be the surest sign that the Sarajevo Film Festival has returned to its roots, reinvigorating life in the Bosnian capital. “This is the event that the people of Sarajevo wait for year-round,” says Marjanović. “These things are key – to keep the festival for the people of the city where it came from.”