As a 12-year-old in Virginia, Ryan Speedo Green was the author of an impressive rap sheet. He was so violent he was banished to a class for delinquents. And when he couldn’t be contained there, he was sent to a juvenile lockup. Those who knew the boy with the unusual name, could see that the child was writing a tragedy. Now, as a man, tragedy has become the dominant theme in his life, but in a way that no one could have imagined.

The high priest in the temple of the Metropolitan Opera in New York, is Ryan Speedo Green, starring in Rossini’s “Semiramide.” Green blessed the hall with a voice that reaches from bass to baritone. 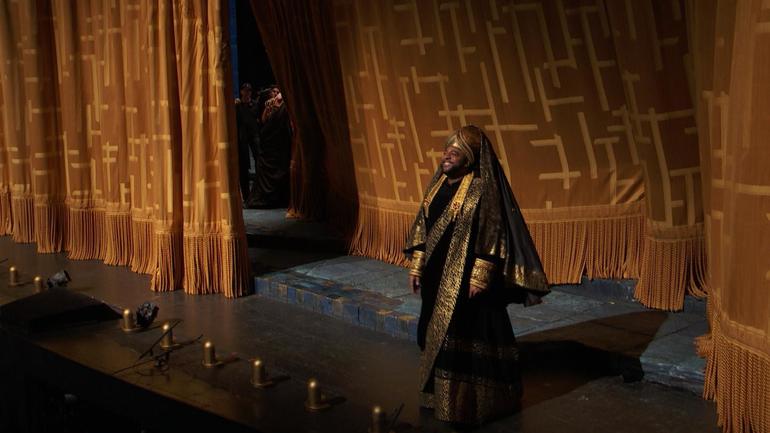 At age 32, he is a member of the Vienna State Opera and performs on stages of the world in German, French, English and Italian.

Some call his sound a gift, but that sells short the life of struggle, and the sacrifices of others, that lifted him to the high altar of success.

Ryan Speedo Green: I lived in a trailer park. And then I lived in another low-income housing where there was a crack house next to me that produced drugs for the city

Scott Pelley: Life at home with your mother and your older brother?

Ryan Speedo Green: It was tough. You know, I had a lot of issues. And a lot of anger problems. it was a lot of explosions of anger, frustration, that was going on at the time.

Explosions of anger were hard for us to picture in the genial man we met at the met. But 20 years before, Green and his brother were being raised by an abusive mother and he returned that abuse. Too violent for fourth grade, he was banished to that class for delinquents.

Ryan Speedo Green: My first day of class, I walked in and there was this little 5’1″ Caucasian, curly blonde-haired lady. And I sit in my chair and I throw my desk at her. And I tell her I will not be taught by a white woman. And instead of kicking me out of the class, like most teachers would do, and you’d be justified in doing so, she, instead took away my chair and said I could learn from the floor. And when I’m ready to not throw my not throw my desk at someone, I could have my desk and my chair back.

That was teacher Elizabeth Hughes. That’s Green standing next to her.

Scott Pelley: Why would Mrs. Hughes figure you for somebody who had a future?

Ryan Speedo Green: Umm, I don’t think it was specific to me. I believe she thought this way about every student that she worked with. Instead of sending me home and throwing down the hammer, the anvil, on judgment, instead she asked me, “Is everything okay at home? What’s wrong with you? Why are you so angry?”

School became a haven, but the fights at home continued. And one day, Speedo Green pulled a knife and threatened his mother and brother.

Ryan Speedo Green: And when the police came to– to my home because they were called, they didn’t feel that it was safe for me to be around my family. And then they took me to juvenile detention. Walked down three flights of stairs in shackles and handcuffs into the back of a police car. And drove about three and a half, four hours to where the juvenile detention facility was. And I just remember you know, feeling alone.

He was locked up for two months. The only sound that penetrated the frightening walls was Mrs. Hughes from fourth grade.

Ryan Speedo Green: And I remember getting a phone call. And she told me that, “Don’t let this moment define you. This doesn’t define you. You can be better. You can do better.”

Scott Pelley: She called you in juvenile detention.

His outbursts put him in solitary again and again. He was 12 years old.

Scott Pelley: And when the door to the isolation cell closed for the first time?

Scott Pelley: And you thought what?

Ryan Speedo Green: Being in this cell was the lowest point of my entire life. And actually when I got out of here that was my motivation to never end up in a place like this. 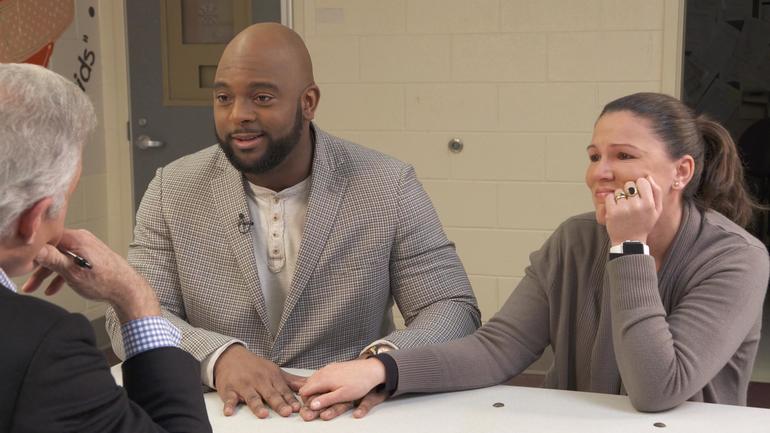 No one was listening to the voice locked in solitary except for the few who would save his life, Mrs. Hughes, who was too camera-shy for an interview, and, in detention, Priscilla Piñeiro-Jenkins.

Piñeiro-jenkins’ was a caseworker in the detention center.

Scott Pelley: This kid who called you a Hawaiian bitch, why didn’t you just say, “Hey, I don’t care what happens to you.”

Priscilla Piñeiro-Jenkins: He’s a child. He’s not– it’s not at me. And you just can’t say no to someone and shut them out when you know they’re desperate to figure out what is love? Who will love me? Who will care for me? Will you stand by me even if I’m cussing you out? Well, yes.

Scott Pelley: He just had to know that somebody gave a damn?

Priscilla Piñeiro-Jenkins: Exactly. And was listening.

That is how the world came to listen.

His life was saved by a few compassionate adults, Mrs. Hughes, Pricilla Piñeiro-Jenkins and a psychiatrist provided by the state of Virginia. Coming out of detention, Green got a fresh start, his family moved to a new town with a new school and new friends. 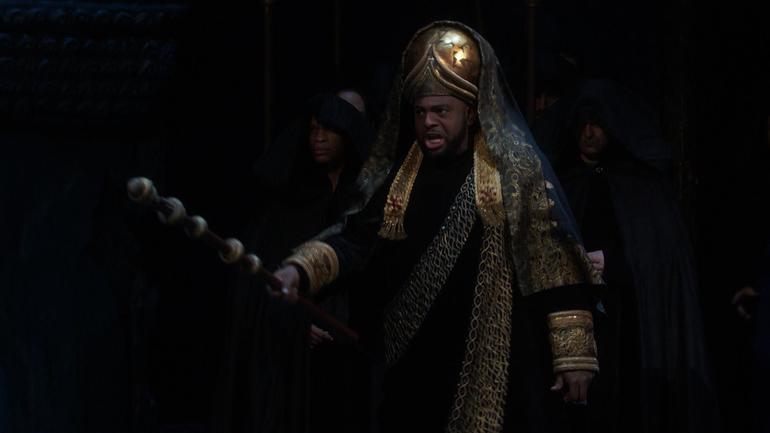 Ryan Speedo Green: And I started realizing that those kids were involved with after school activities. From Latin club that I joined, to chorus that I joined, to football that I joined. And so I had no time to argue with my mom because I was thinking about studying for a Latin quiz bowl,  or I was in my room, playing with my keyboard trying to memorize music for my chorus concert the next day.

Chorus had been suggested by Green’s football coach who thought it would be easy. It wasn’t. But his singing improved so much that he was accepted into Virginia’s prestigious Governor’s School for the Arts. Then at the age of 15, a field trip brought him here to New York City and the Metropolitan Opera.

Ryan Speedo Green: It was the opera, “Carmen” with Denyce Graves, who was the title role.

Denyce Graves seduced a soldier on stage and Speedo in the audience.

Ryan Speedo Green: I fell in love with opera that day. And I left the The Metropolitan Opera and told Robert Brown, who was my voice teacher, that I know what I wanna do with my life.  I wanna sing at the Metropolitan Opera. And he, instead of you know, you know saying, “No you can’t do that” or like, “Maybe you should aim a little lower.” Or, like, maybe instead of saying all these ifs and ands and buts he told me a list of many things that I had to do, including graduating high school, going to college for music, singing in foreign languages, I mean dozens of things that I had to do before I even could be able to audition for the Met.

He checked off the entire list, including bachelor and master’s degrees in music. At the age of 24, he entered a Metropolitan Opera competition for young singers. And he beat more than a thousand other contestants.

Scott Pelley: First time I saw you perform you know what I wanted to know?

Ryan Speedo Green: What did you wanna know?

Scott Pelley: Where the heck does Speedo come from?

Ryan Speedo Green: Well, my father was an amateur bodybuilder. And he wanted to name me after himself. But my mother was like, “No, he can’t be named Cecil.” So he named me Speedo, after his favorite bathing suit, which also happens to be his middle name. And that’s how I got the name Speedo.

Scott Pelley: What role has being black meant in all of this?

Ryan Speedo Green: It’s been good and bad. You know, in the beginning of my career it’s the thing that pushed me forward a lot to break people’s stereotypes. I wanted for people to think of me as an opera singer, not a black opera singer.

Ryan Speedo Green: And then I’ll come out of this performance of completely German music and there’ll be an older Caucasian person who will come up to me and be like, “I would love to hear you sing, “Old Man River.”

“Ol’ Man River” is the showstopper from “Showboat,” made famous by Paul Robeson.

Ryan Speedo Green: Every time I sing there’s gonna be someone in the audience who’s gonna see me as Joe in “Showboat” instead of seeing me as Ryan Speedo Green, the bass-baritone classical music opera singer.  The irony of it is this guy Joe is singing this piece about the hardships of post-slavery and about the hardships that Caucasian people are causing him. Yet, the people who love the song the most are Caucasian people. 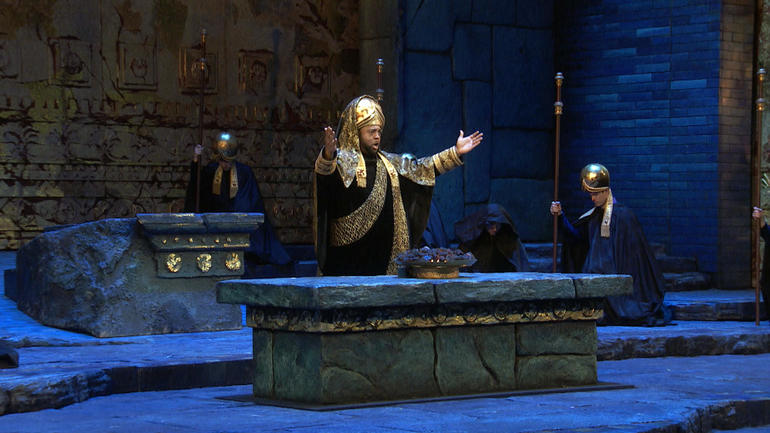 Green invited us backstage at the Met for his warm up routine, a typical set of exercises to loosen his chords and his lips for precise diction.

There are no microphones in opera, so his voice has to fire over a 60 piece orchestra and ricochet off the back of the hall. The dimensions of his voice tend to place him in particular roles.

Green’s audience often includes Elizabeth Hughes and his mother with whom he’s reconciled. He travels with his new wife and their new son. Because he’s only 32 years old, Green’s bass-baritone voice will continue to mature until this baby is about ten years old. The voice we hear today is in its infancy.

Scott Pelley: If you could speak to that kid sitting alone in solitary, what would you tell him?

Speedo Green performs in a world of demons and gods, telling stories in which a single hero can change lives. The plots, of course, are fanciful, except to a man whose own life resonates on a stage of impossible dreams.