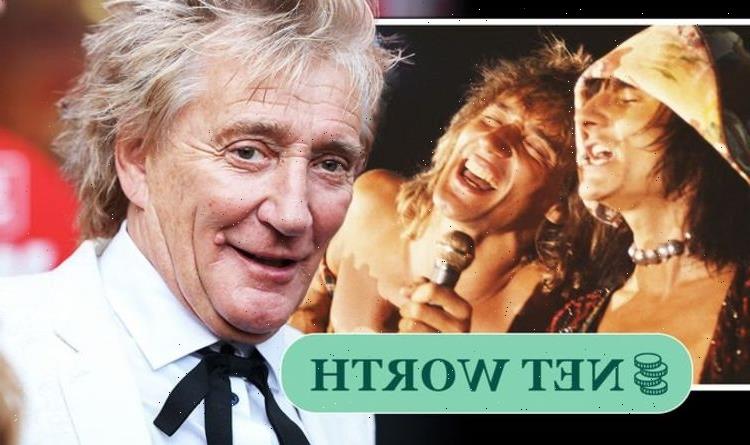 Rod Stewart discusses his marriage to Penny in 2018

Rod Stewart will appear on The Graham Norton Show tonight at 10:35pm alongside celebrity guests Lady Gaga, Josh Fad, Nadiya Hussain, and Will Smith. Rod is a huge name in the music industry. How much is he worth?

Rod has an estimated net worth of $300million, according to Celebrity Net Worth.

It’s a huge fortune that’s currently equivalent to around £224million.

The singer has his long and successful career in the spotlight to thank for his millions.

But who will inherit his money when he dies?

Rod has eight children with five different mothers and has been married three times.

The singer songwriter then married Rachel Hunter in 1990 before getting separated in 2006.

Now, Rod is married to Penny Lancaster, an English model, whom he tied the knot with in 2007.

Rod has one child called Sarah with his first partner Susannah Boffey.

Sarah was raised by her adoptive parents, Gerald and Evelyn Thubron, but reunited with her father in the summer of 2010.

The rock star has two children from his first marriage to Alana Stewart, Kimberley and Sean.

Kimberley’s partner is Oscar-winning actor and director Benicio Del Toro, and they have a child together.

In 1987, Rod had his fourth child, Ruby with his partner at the time, Kelly.

He also has two with his current wife, named Alastair and Aiden.

With eight children, it is difficult to tell who will inherit Rod’s huge fortune – or if it will be divided equally between all of them.

Born in north London in 1945, Rod’s music career began in the early 60s when he took up busking with a harmonica on the capital’s streets.

In 1963, he joined soul and rhythm group The Dimensions as a harmonica player and vocalist.

Later, in 1969, he joined Faces and, at the same time, maintained a solo career.

Rod shot to fame with his third album. Released in 1971 and entitled Every Picture Tells a Story, it topped the charts in the UK, the US, Canada, and Australia.

Since then, he has been known as one of the world’s most successful artists.

In 2008, Billboard magazine ranked Rod as the 17th most successful artist on the Billboard Hot 100 All-Time Top Artists.