I thought Emmanuel Macron was asking for trouble when just after his 2017 election victory he staged a victory celebration in which he walked, alone and floodlit, across the courtyard of the Louvre, the old royal palace.

Who does he think he is, I thought, the King of France? Since the Bastille fortress was stormed by the people of Paris on July 14, 1789, the country has got rid of three kings, two emperors and several presidents, and has worked its way, often violently, through 15 constitutions.

Every time there has been a major uprising, it has taken everyone by surprise. The last king had to escape hastily from Paris in a hansom cab, and reached England on a Channel ferry disguised as Bill Smith. Indeed, every French monarch since 1815, and the first president of every republic, spent time as an exile in Britain. 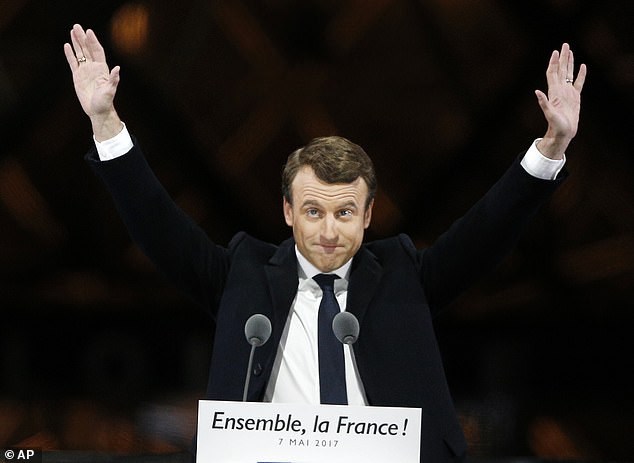 Emmanuel Macron gestures during a victory celebration outside the Louvre museum in Paris, France, after his election win back in May last year

France’s Fifth Republic is a fairly remote system of government. Power is concentrated in the Elysee Palace and parliament is downgraded. So people – workers, farmers, students, immigrants, pensioners – often feel their only way of being heard is to cause mayhem. Monarchy tempered by riot, one might say. And out-of-touch presidents never see it coming. It’s become almost a ritual.

Now, once again, France’s rulers have been taken by surprise and all they can do is call out the riot squads.

What began as a protest against fuel taxes has turned into a general movement of frustration and anger.

Anger against what people feel to be the injustices and inequalities that stem from the great crash of 2007-08, and against the fact that the rich and clever seem never to suffer, while (as the French say) ‘it’s always the same ones who pay’.

The French economy has been underperforming for years. Unemployment, especially among the young, has been chronically high. 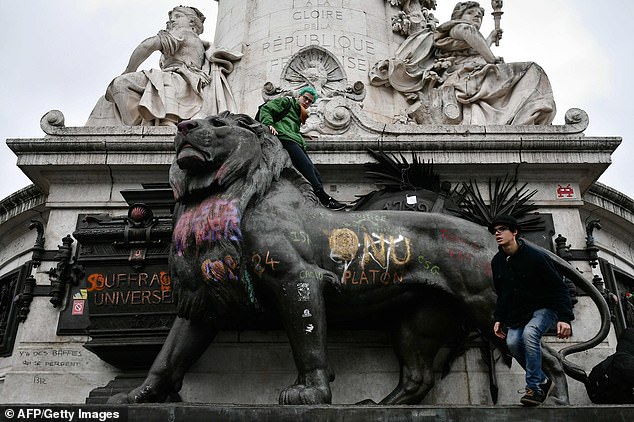 High school students stand on the defaced statue of the Republic in the Place de la Republique in Paris today. Yet more violence is predicted this weekend

But Macron’s problem is also a European problem, and a problem for Europe. A European problem because it is the French variant of a widening gulf between rulers and ruled that we see across the continent.

For a generation, people have put up with stagnant wages, permanent unemployment, rising inequality and mass immigration. Power has been taken away from democratic national governments, often with their consent, and vested in distant and unaccountable bodies – trade organisations, international courts, and above all, the EU.

Being president of the Fifth Republic – the nearest thing to an elected monarch – is a difficult job, perhaps an impossible one. On one hand, the French want their president to embody the greatness of France. They didn’t forgive Sarkozy and Hollande for looking vulgar and ridiculous. 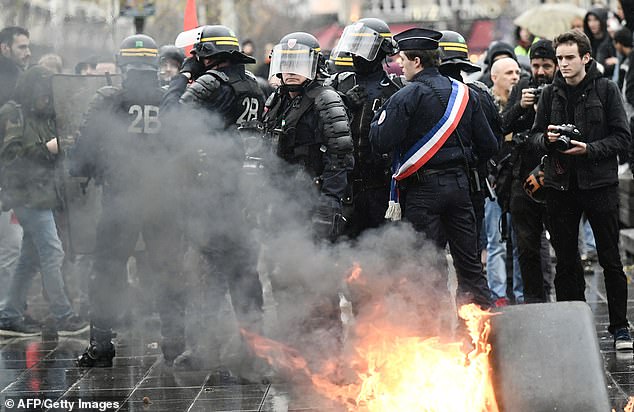 But they also want the president to listen to them, to seem at least sometimes to be a man of the people who feels their pain. Good King Wenceslas rather than Sun King Louis. President Jacques Chirac sometimes managed this, slapping cows’ rumps at agricultural shows and eating man-sized slices of pâté de campagne washed down with a glass or two of Rhone.

With all his faults, he was liked. But this is not Macron’s style. He is too fastidious. When first elected he said he wanted to be like the god Jupiter, high in the clouds. He has been sharply brought down to earth. Why did Macron think he was a different kind of monarch? A veteran French journalist who knows him told me: ‘You have to remember that all his life he’s been the cleverest man in the room.’ And now his cleverness has proved to be not enough. Perhaps even a handicap.

He has some remarkable political gifts. He’s determined and charismatic. But he doesn’t suffer fools gladly, and sometimes he seems to think the electors are pretty dim. 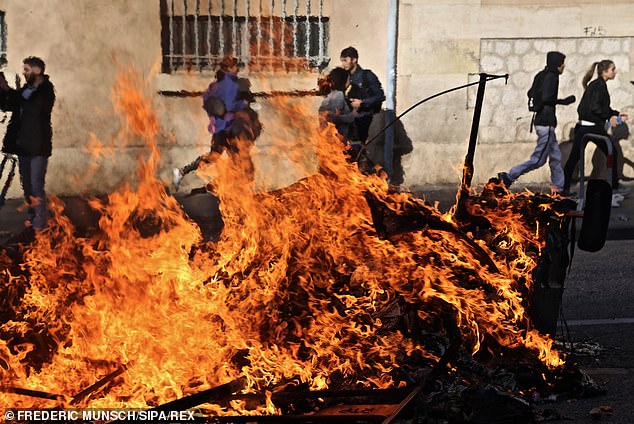 Up in flames: Bins were torched in the street as protesters blocked schools during another day of unrest in Marseille today

Well, General de Gaulle thought so too, but he kept it to himself. Macron sometimes shows it, and people are increasingly resentful of a man who seems remote and disdainful.

They don’t like being talked down to by a young man in a sharp suit, the embodiment of so much they resent. The rapid fall in his popularity and the venom with which people now talk about him is astonishing.

Macron will surely survive, however. There is practically no way of removing a French president, and with the mobilisation of 80,000 police and gendarmes, with armoured vehicles in reserve, there will be no revolution.

There hasn’t been one in peacetime since 1848. The riots will peter out. But Macron cannot recover the position he once had. People have been shocked by the anger and violence on display, and by footage of 150 schoolchildren made by police to kneel in the mud with their hands behind their heads, like captured terrorists. 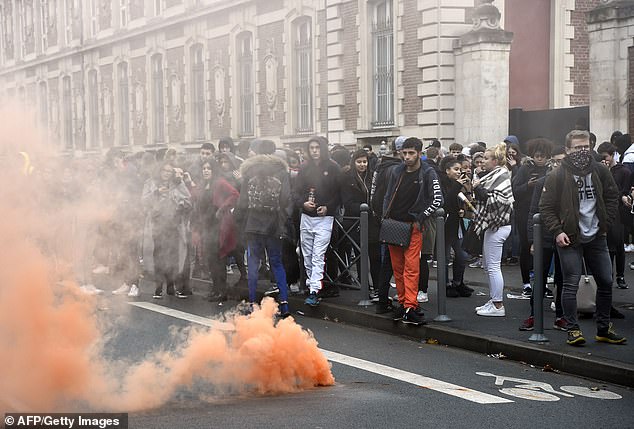 Armoured cars equipped with machine guns will police the streets of Paris as the French government attempts to avoid urban warfare. This was the scene in Lille today as students protested in front of the lycee Montebello

Macron has backed down and tried to buy off the demonstrators, and I suspect this means that his chance of really changing France and rejuvenating the economy has gone for good.

And this brings us back to the EU. Macron has put himself forward as the saviour of the European project, which he claims is facing collapse unless it he leads it into the next stage of integration – what he calls a ‘sovereign Europe’, ultimately in charge of finances, taxation, welfare, labour law and immigration.

His effort to reform the French economy and cut spending is spurred on by determination to reduce France’s public borrowing below the EU target of three per cent. 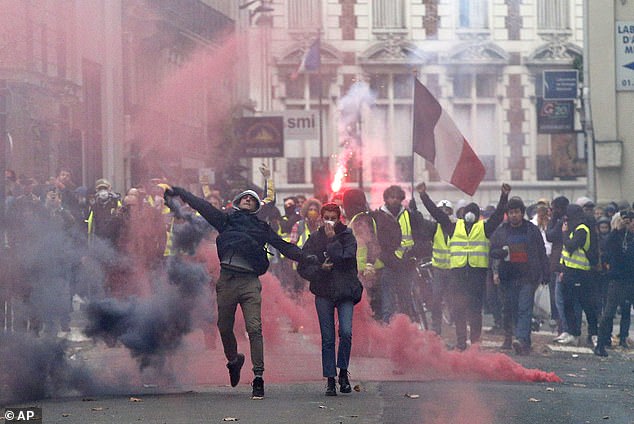 Paris is on lockdown as armed police battle to contain ‘yellow vest’ demonstrators with more than 700 arrests so far today in the fourth straight weekend of demonstrations over living costs and proposed tax rises in France. Angry protesters have been pictured throwing flares and smoke bombs at police who have returned in kind with tear gas and water cannons

Only by doing so could he make good his claim to European leadership, as at least the equal of Germany. That too now seems a pipe dream. Where will France and the EU go from here? The future is unpredictable, and it is not very bright.

When people feel they are no longer heard by the elites, protest becomes more vehement. We see it in various forms from Spain to Hungary. In France, it leads to burning cars and looted shops. In Britain, it leads to Brexit. France has once again provided us with a dramatic spectacle of what can happen when a political system implodes.

In Britain, too, we need to heed the warning. If people feel those in power despise them, sooner or later they react.