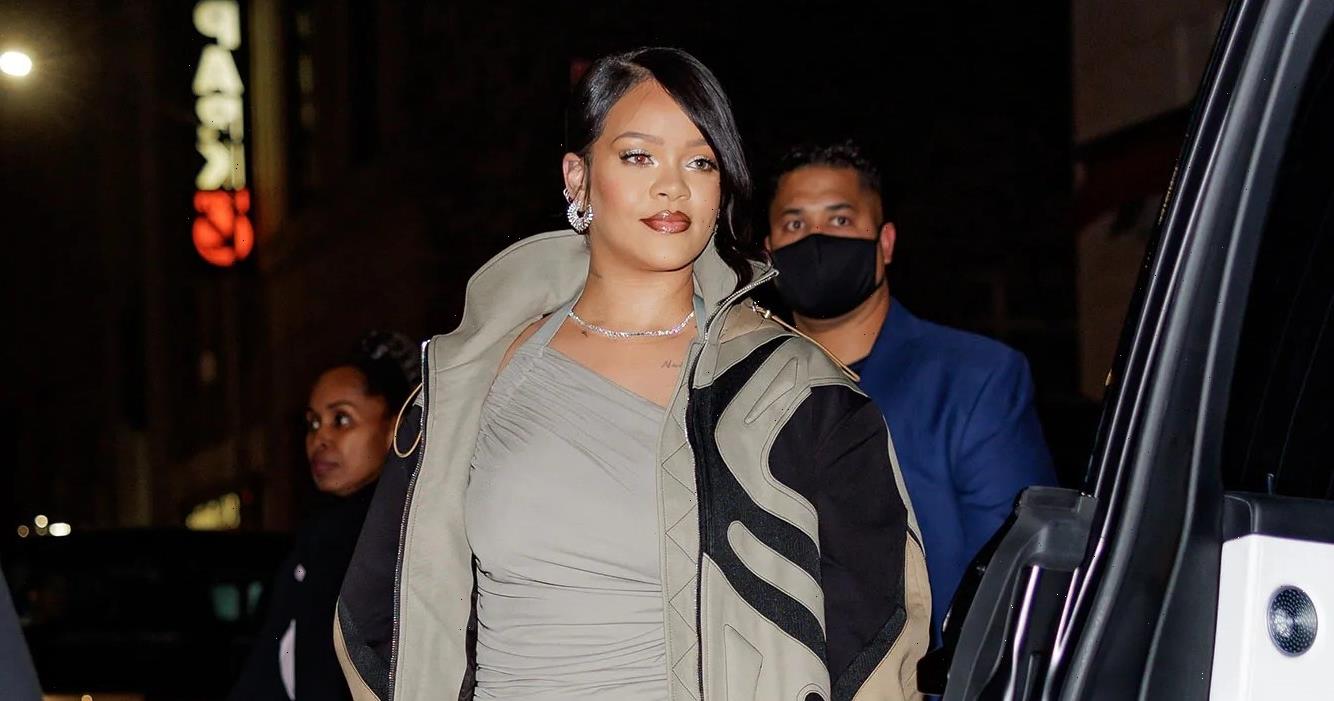 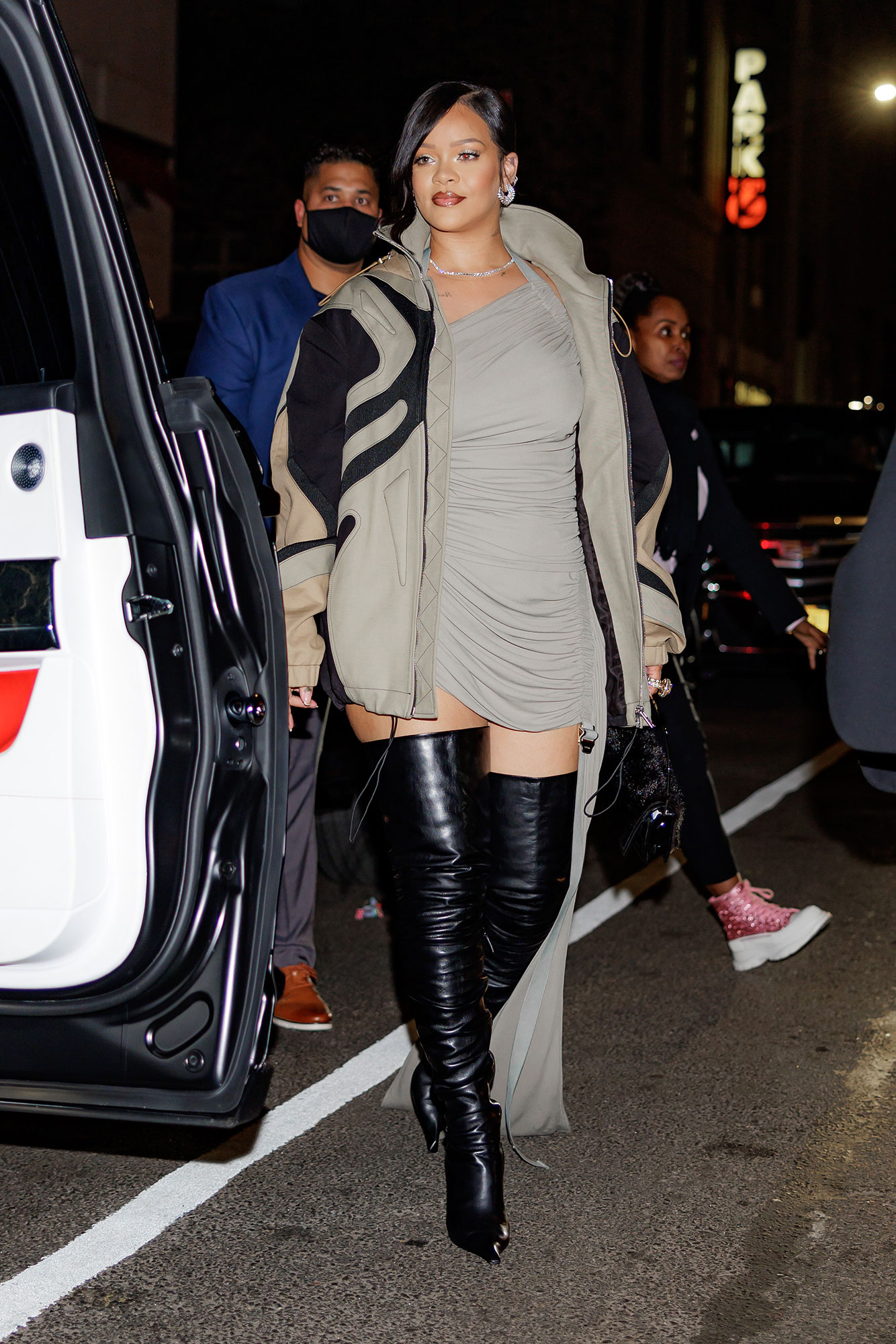 Another day, another serve from Rihanna! The singer kicked off boot season while out and about in New York.

The Grammy winner, 34, attended a Rolling Loud Festival afterparty with boyfriend A$AP Rocky on Sunday, September 25, wearing over-the-knee boots by Balenciaga. The shiny footwear was equipped with a scrunch construction and a sexy pointed toe. The “Diamonds” artist paired the shoes with a mini dress from Dion Lee. The sultry gray frock featured a scrunch silhouette and stopped just below Rihanna’s bum. She finalized the look with a moto jacket and a black clutch.

Rihanna also accessorized with a diamond necklace and coordinating earrings. As for her glam, the beauty mogul kept the glitzy theme going, rocking sparkly green eyeshadow and a glossy lip. She styled her hair in a glamorous ponytail with a dramatic side part.

Prior to the post-event celebration, Rihanna cheered on her man at his set during the festival, which was presented by Fashion Nova. “Rihanna was there supporting [Rocky]. She looked on from the side of the stage and admired him,” a source told Us Weekly exclusively.

The couple’s night out comes amid news that Rihanna will headline the 2023 halftime show for Super Bowl LVII. She announced the news on Sunday, sharing a photo via Instagram that showed what appeared to be her tattooed hand holding up an NFL-branded football. The official NFL Instagram account confirmed the news by posting the same photo with an excited caption: “Let’s GO – @badgalriri @rocnation #SBLVII @applemusic @nflonfox.”

Rihanna’s big gig stirred fans into a frenzy considering she hasn’t released an album since dropping Anti in 2016. Though the Barbados native hasn’t blessed Us with music, she has been quite busy growing her Fenty Beauty empire and expanding her family. 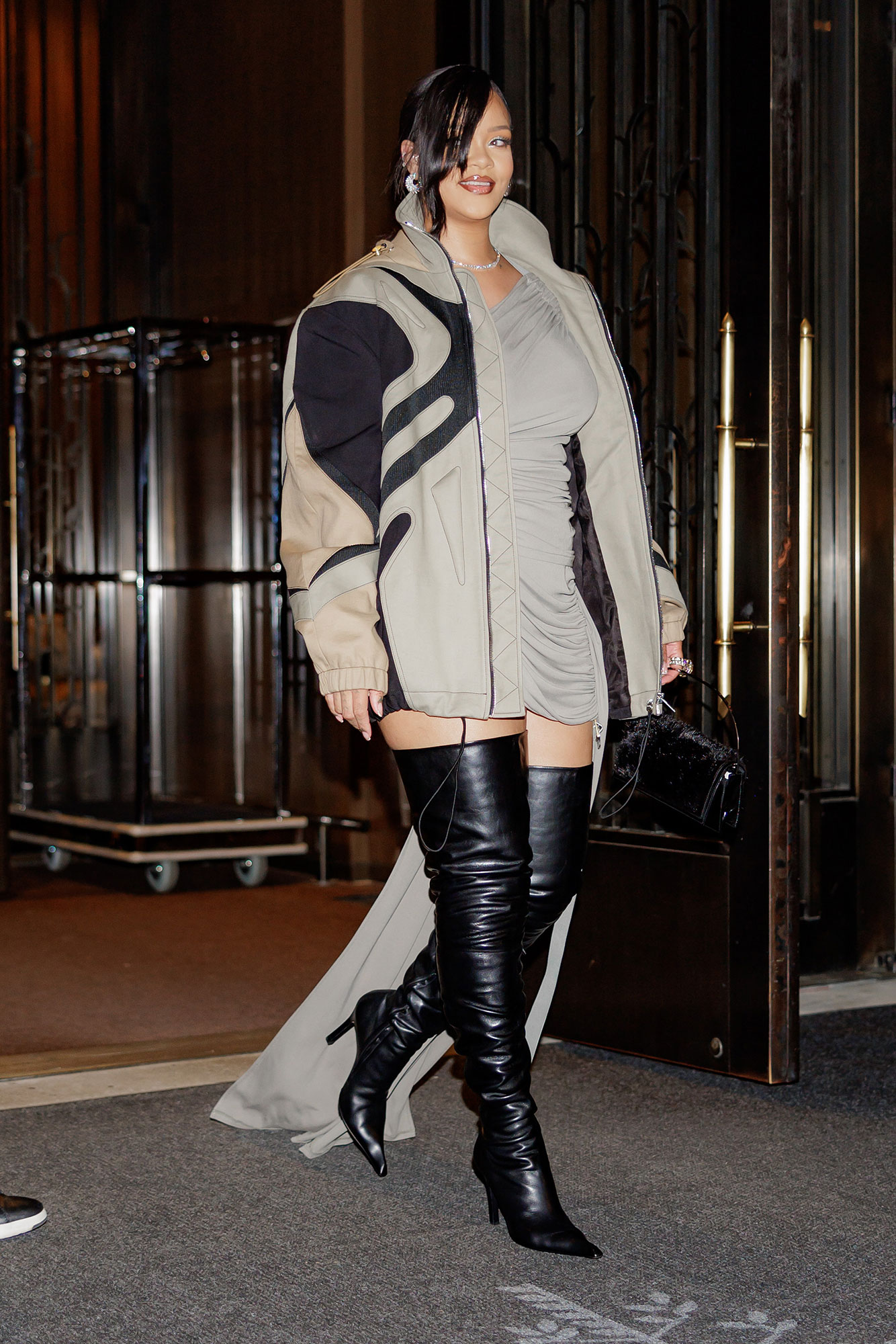 The songstress and Rocky, 33, welcomed their first child together — a boy — in May and have been basking in baby bliss.

“They rarely leave their baby’s side,” a source told Us in August. “They’re being very private about their newborn out of concern for his safety and really just want to keep him away from the public eye for the time being. … They both feel really blessed and couldn’t be happier.”

Rihanna and ASAP Rocky: A Complete Timeline of Their Relationship

The insider added that Rihanna is in no rush for a post-baby snapback. “Rihanna’s not in a rush to lose the baby weight. She’s really embraced her body and doesn’t feel pressure to lose it quickly,” the source told Us. “Rihanna is a workaholic so it’s nice to see her taking the time to flourish in motherhood.”

The couple sparked romance rumors in December 2019, with Us exclusively reporting two months later that the musicians were “hooking up.” The “Good for You” rapper broke his silence on the relationship in May 2021, calling Rihanna “the love of my life” during an interview with GQ.