One of Australia’s most respected businessmen has blasted both major political parties for being “riddled with factionalism”, warning internal disputes are putting desperately needed economic reforms on hold.

In an election-eve intervention ahead of a campaign in which both the Coalition and Labor are presenting relatively thin policy agendas, Roger Corbett, a well-respected former Woolworths chief executive, Fairfax Media chairman and Reserve Bank board member, said Australia had accumulated a “gigantic debt” to counter the economic impact of COVID-19. 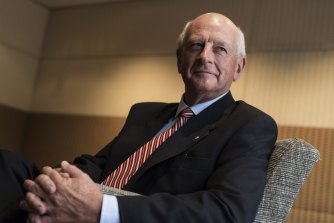 “I think most areas of politics have supported that as necessary. But now the position is changing very quickly and we have got a world economy creating inflation, and inflation inevitably creates higher interest rates and that increases the burden of the national debt enormously,” he warned.

The Liberal Party member, who is closed to former prime minister Tony Abbott and was president of his Warringah electorate council, stressed he was not targeting one side of politics because “both parties are riddled with factionalism and this factionalism is pulling the unity of the parties apart and making it very difficult for both to have common ground moving forward”.

But his comments come after weeks of public criticism of Prime Minister Scott Morrison from his own side and will be interpreted as a coded rebuke of the NSW Liberal Party – and by extension, the PM – amid deep divisions within the NSW branch and bitter factional infighting over preselections.

Mr Corbett said in order to be able to continue to pay for Medicare, the education system and the NDIS, “we need to grow our ability to earn money and our ability to increase productivity”.

“We need major economic and industrial relations reforms … that will be the major responsibility for any incoming government.”

“You can’t give wage growth if you don’t have productivity growth and both of those have been laggards for ten years.”

On Thursday, the Prime Minister’s election timetable was called into question after the High Court agreed to hear an extraordinary legal challenge to the federal intervention in NSW preselections on Friday afternoon.

The High Court fast-tracked the special leave application after the NSW Court of Appeal threw out a challenge brought by Matthew Camenzuli to the legitimacy of Mr Morrison’s decision to directly select candidates across NSW.

The expedited hearing for Mr Camenzuli, who was booted from the party on Wednesday due to the preselection battle, is set down for 4pm on Friday.

Liberal Party sources insisted the hearing did not mean the Prime Minister had to wait until the court matter was resolved, given nominations for candidates do not close until ten days after the election is called and the writs are issued. However, calling the election while the status of NSW candidates remains in doubt would potentially be risky.

The NSW Court of Appeal dismissed Mr Camenzuli’s application to overturn the federal intervention on Tuesday, ruling it was an internal political party dispute that was not capable of being arbitrated by the court. He is appealing to have that order set aside.

Barrister Guy Reynolds, acting for Mr Morrison, said the application to appeal was opposed, calling it an abuse of process and alleging Mr Camenzuli did not have legal standing as he was no longer a member of the party.

If special leave is granted on Friday, the High Court will hear the appeal but if leave is not granted it will be the end of the line for Mr Camenzuli.

University of Queensland legal professor Graeme Orr, an expert in electoral law, said the High Court needed to take on a case at some point “to make clear when state courts can be asked to enforce party rules”.

“But I’d be surprised if they take on this case with an election due so soon.”

Mr Morrison left the door ajar to calling the federal election as soon as Friday, formally kick-starting a fierce contest with Labor’s Anthony Albanese for the nation’s top political job, though a visit to the Governor-General on Saturday or Sunday appeared more likely, with an election date of either May 14 or May 21.

“It’s almost three years by mid-May from the last election. I said we would run a term, do the job and go to the Australian people,” Mr Morrison said. “That’s when the election is due and I think we’ll be calling it soon”.

Mr Morrison said voters know who he is, but described Mr Albanese as “a completely blank page”.

“At a time of great uncertainty, considerable uncertainty, not just in the economy but also in terms of national security, a blank page is no answer to the problems that Australians face.”

Speaking in Perth, Mr Albanese highlighted his experience as a former deputy prime minister and challenged the Prime Minister to call the election when asked a question on Labor’s manufacturing policy.

“We will be making more announcements about that if ever the Prime Minister gets around to formally calling the election campaign, if ever he decides that he has spent enough taxpayers’ money on ads in the lead-up to the election”.

Staff from key political offices such as Deputy Prime Minister Barnaby Joyce and campaign spokesman Simon Birmingham have begun relocating to Brisbane, where the Coalition’s campaign headquarters is based.

The government is hoping the calling of the election will draw a line under the series of attacks on the Prime Minister’s character and judgment from his own side in recent weeks and ramp up scrutiny on Mr Albanese.

The Coalition will start the election campaign well behind the Labor Party in all published opinion polls, including the most recent Resolve Political Monitor in which the government’s primary vote increased slightly from 33 to 34 per cent following the budget, while Labor’s support jumped from 35 to 38 per cent.