How lovely are your branches! Crafty revellers share snaps of their VERY alternative Christmas trees on social media – made from wristbands, traffic cones and even surgical GLOVES

There’s no rule that says a Christmas tree has to be a green fir – as these social media snaps prove.

After tweeting a picture of her own quirky take on the Christmas tree, Rachel Kim in the Philippines was inundated with pictures of unlikely efforts by other creative types around the globe.

Rachel had used tiers of wristbands in coordinated colours to imitate a tree, adding the face of Chinese singer Tao as the crowning glory to her masterpiece.

Others who replied to show off their own alternatives included a nurse by the name of Valerie from Texas, who fashioned hers from surgical gloves.

Meanwhile Scarborough Children’s University in Yorkshire posted a picture of their ‘recycled tree’ – made up of plastic bottles – including a bottle of Fairy washing-up liquid in place of the angel.

Elsewhere welding students from Pennsylvania showed how they made a metal tree from a pole with cleverly placed spikes which they adorned with tinsel. 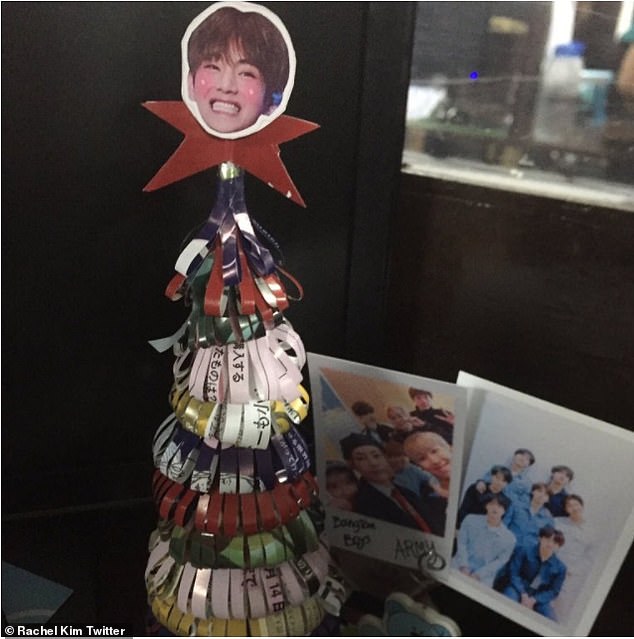 Rachel Kim in the Philippines used tiers of wristbands in coordinated colours to imitate a tree, adding the face of Chinese singer Tao as the crowning glory to her masterpiece, kicking off a thread of alternative Christmas trees on Twitter 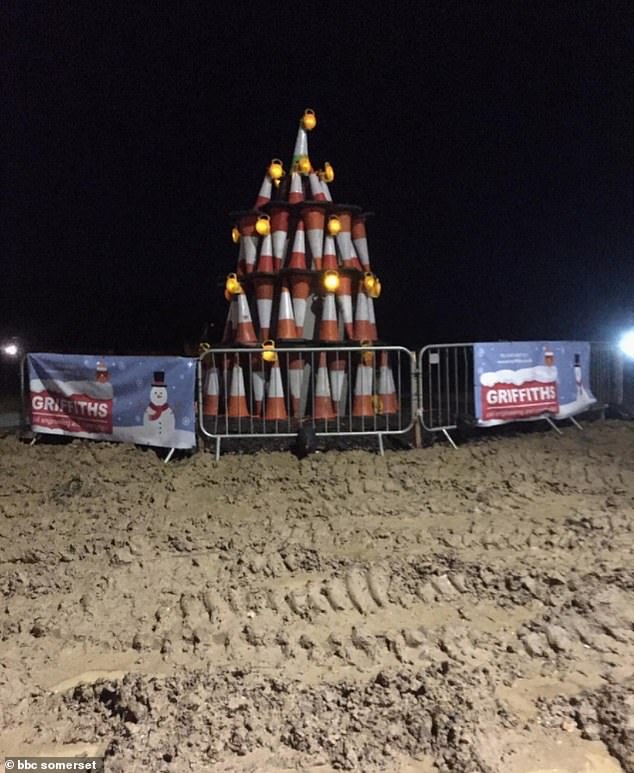 BBC Somerset shared their own quirky outside version of a tree, writing: ‘.Coney Island! Workers on one of Yeovil’s busiest roads are trying to spread a bit of festive joy by building their own version of a Christmas tree’ 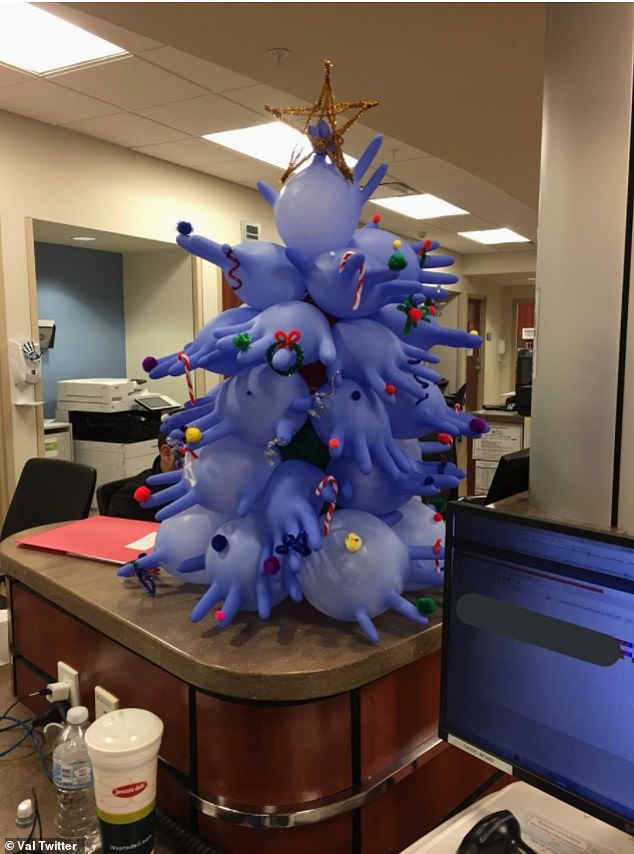 A nurse by the name of Valerie from Texas sharing a snap of a tree-shaped display of blown-up gloves with a star at the top, tweeting:  ‘Check out our ER version of a Christmas Tree! I’m loving it’ 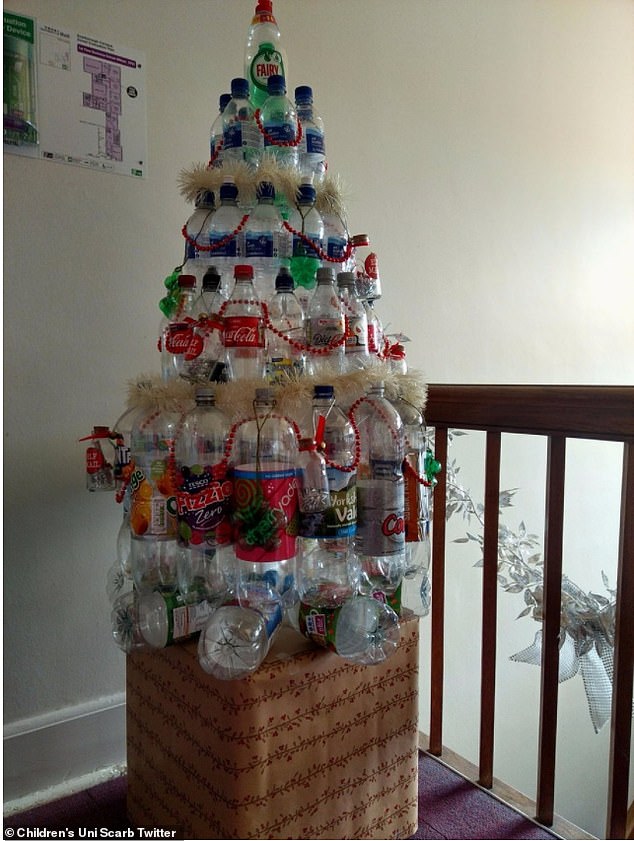 Scarborough Children’s University in Yorkshire posted a picture of their ‘recycled tree’ made up of plastic bottles, with a bottle of Fairy washing-up liquid as their angel, in a play on words 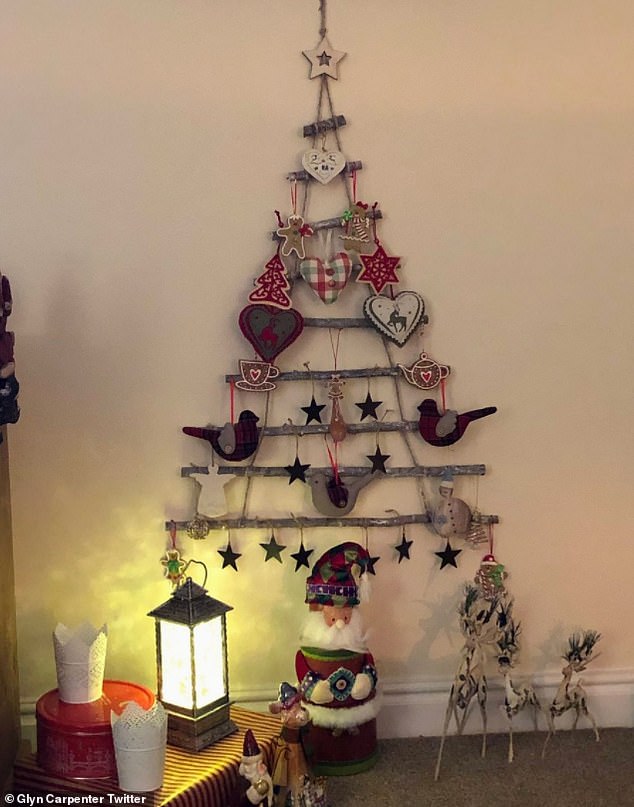 A carpenter by the name of Glyn from Hampshire joined the thread, showing off his creative version of the tree and explaining of how he made it: ‘Just pieces of wood strung together that I have had for years. And I know when and where I was when I bought each decoration, it’s the memories that mean so much to me. Happy Christmas every one. ‘(sic) 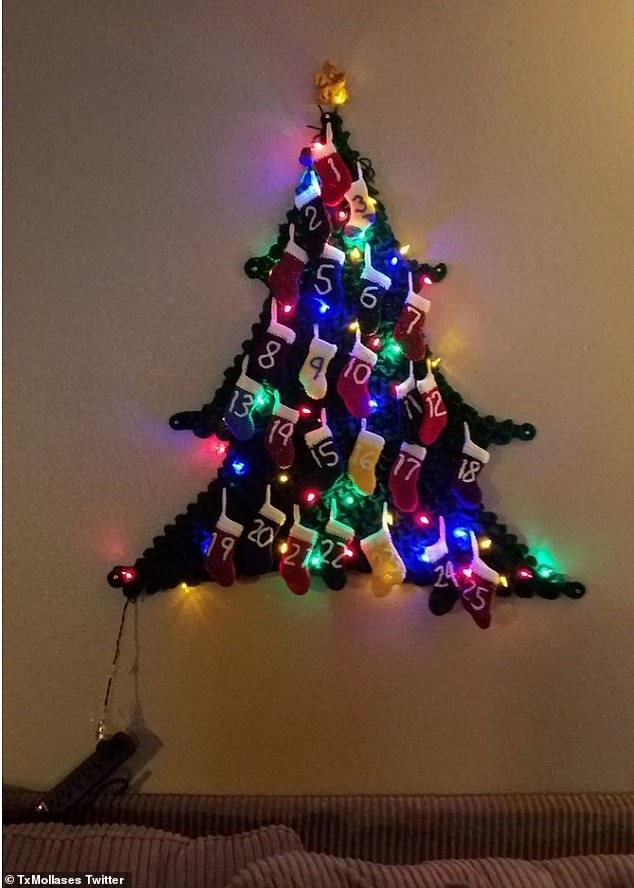 Meanwhile an American singer shared her own version of a tree, with stockings signifying every day of the advent month, simply writing ‘My version of a Christmas tree!’ 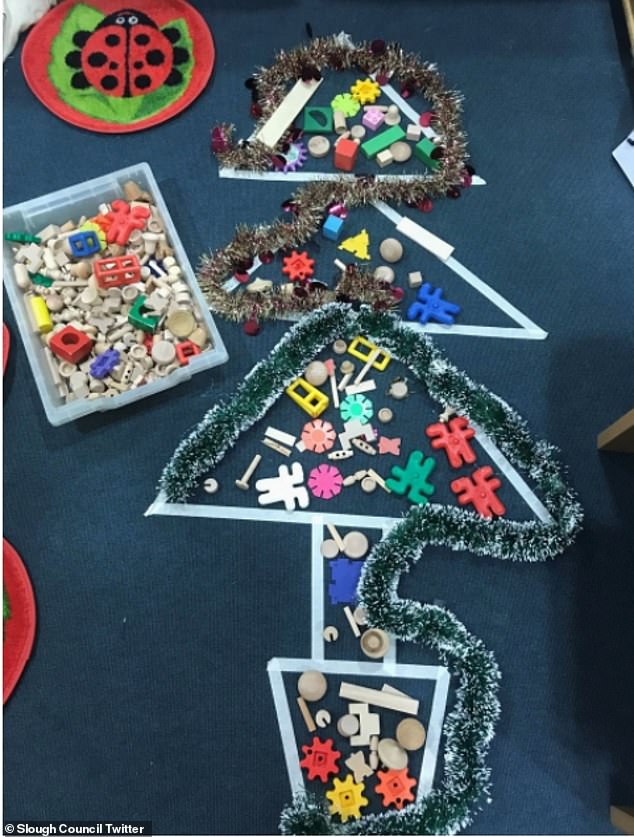 Elsewhere Slough council in Berkshire demonstrated how you could create an ever-changing tree, writing: ‘Monksfield Way Children’s Centre has created a loose parts Christmas Tree…all you need is a roll of masking tape and any objects from around your home to decorate!! #alternative #ChristmasTree’ 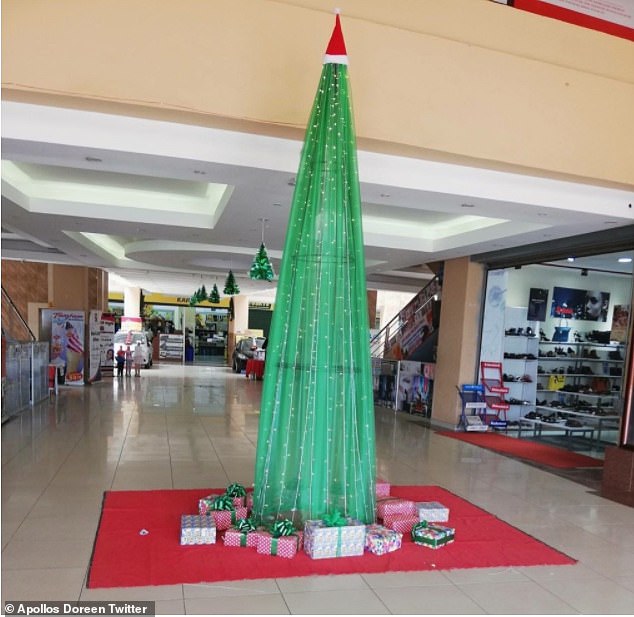 And a mother by the name of Doreen from Nairobi shared a picture of a tree in an Ethiopian shopping centre, writing: ‘The economy class version of a Christmas tree’ 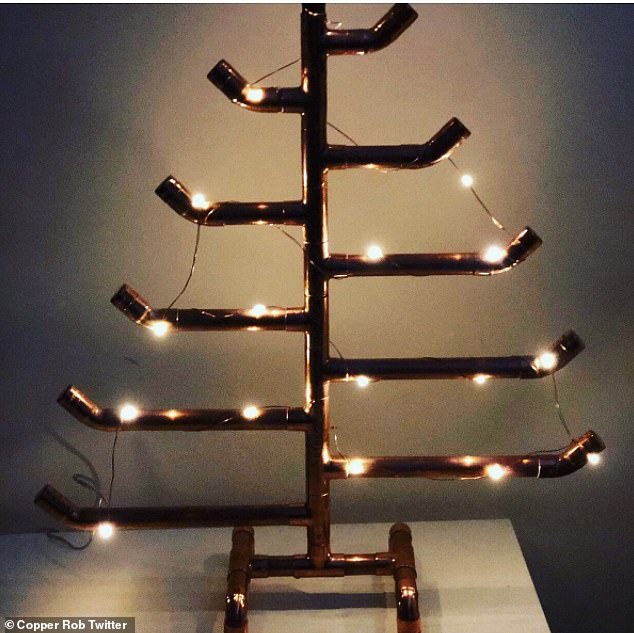 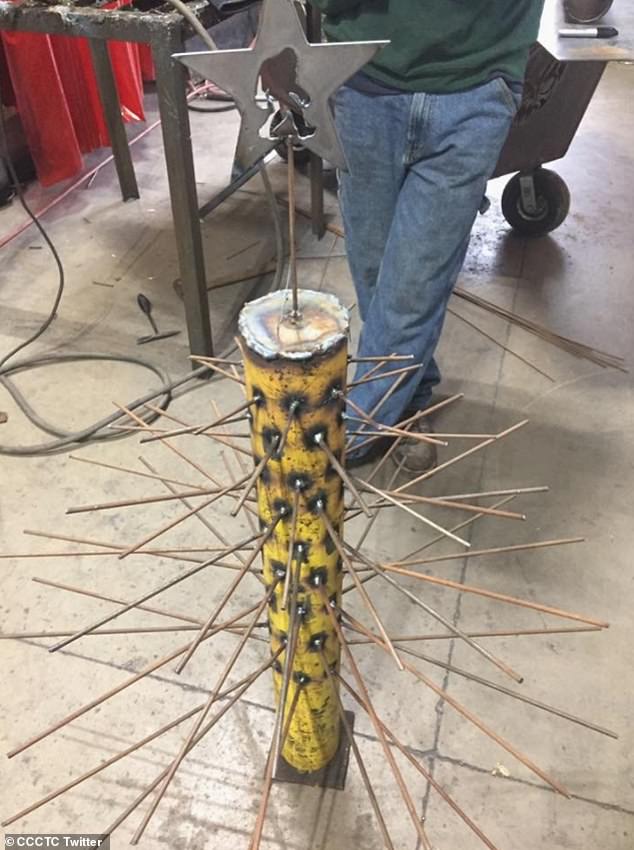 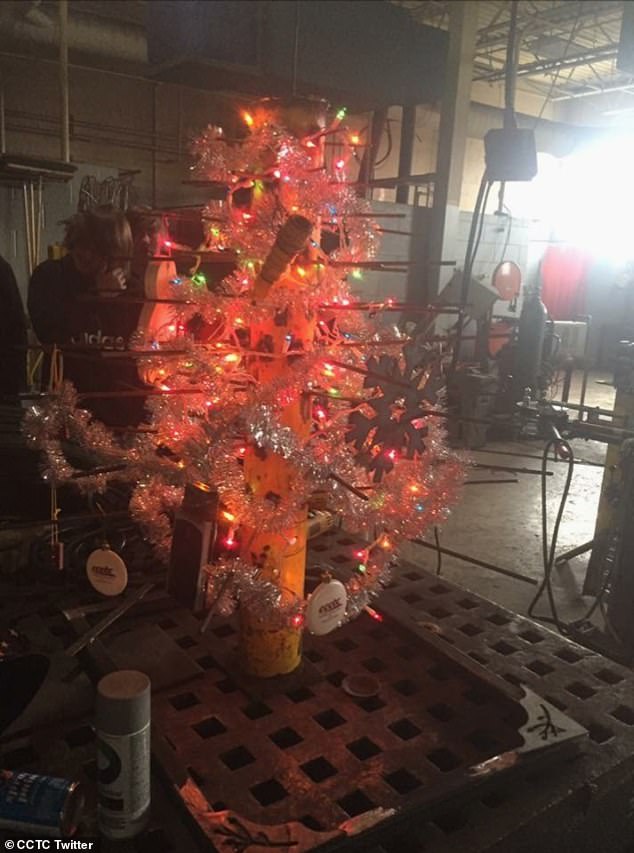 Elsewhere welding students from Pennsylvania showed their creative side, creating a metal tree from a pole with cleverly placed spikes which they adorned with tinsel, in a collection of hilarious Christmas tree alternatives 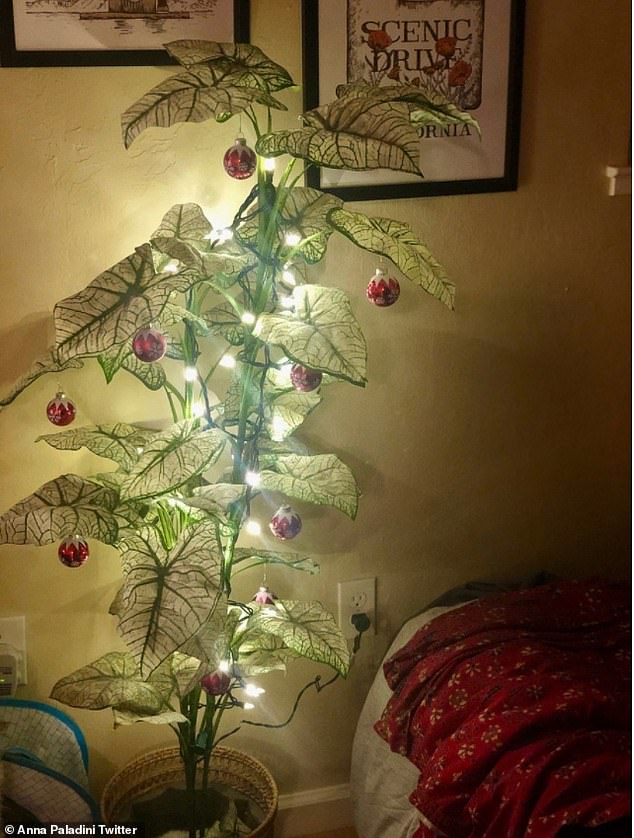 An American woman by the name of Anna Paladini revealed that she had to resize her tree to go with her home, writing: ‘Since moving, I now live in a small (but perfect-sized) studio in Chico. I have everything I need… except room for a big Christmas tree in my tiny lil living space. I decided to improvise. I think I’m happier with my version than I would have been otherwise.’ (sic) 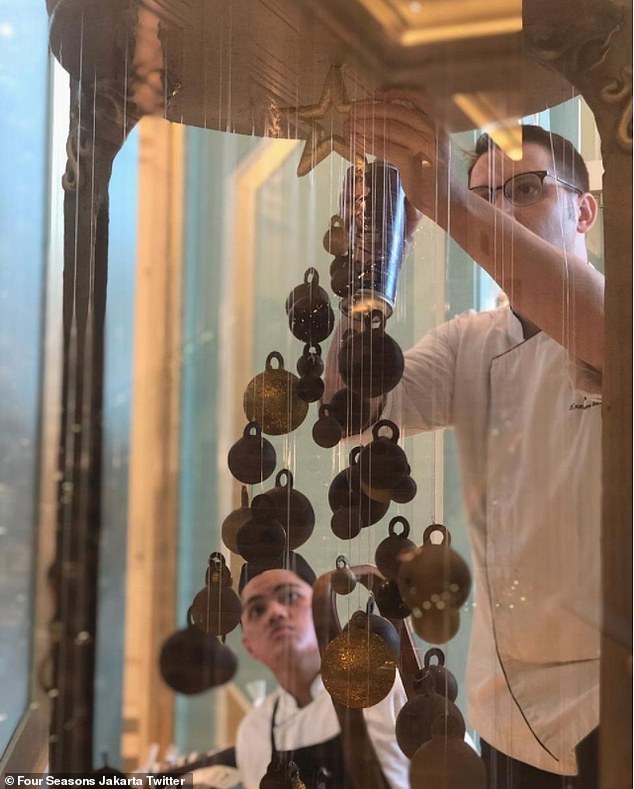 And kitchen staff at the Four Seasons Hotel in Jakarta got in on the action too as they shared a creative display of edible baubles, writing: ‘Chef @lorenzo__sollecito and his creative team made their own version of Christmas Tree. And yes, it’s made out of chocolate’