But the prices vary hugely between the biggest property agencies in the UK forcing tenants to navigate complex and confusing fees when looking for a new home. 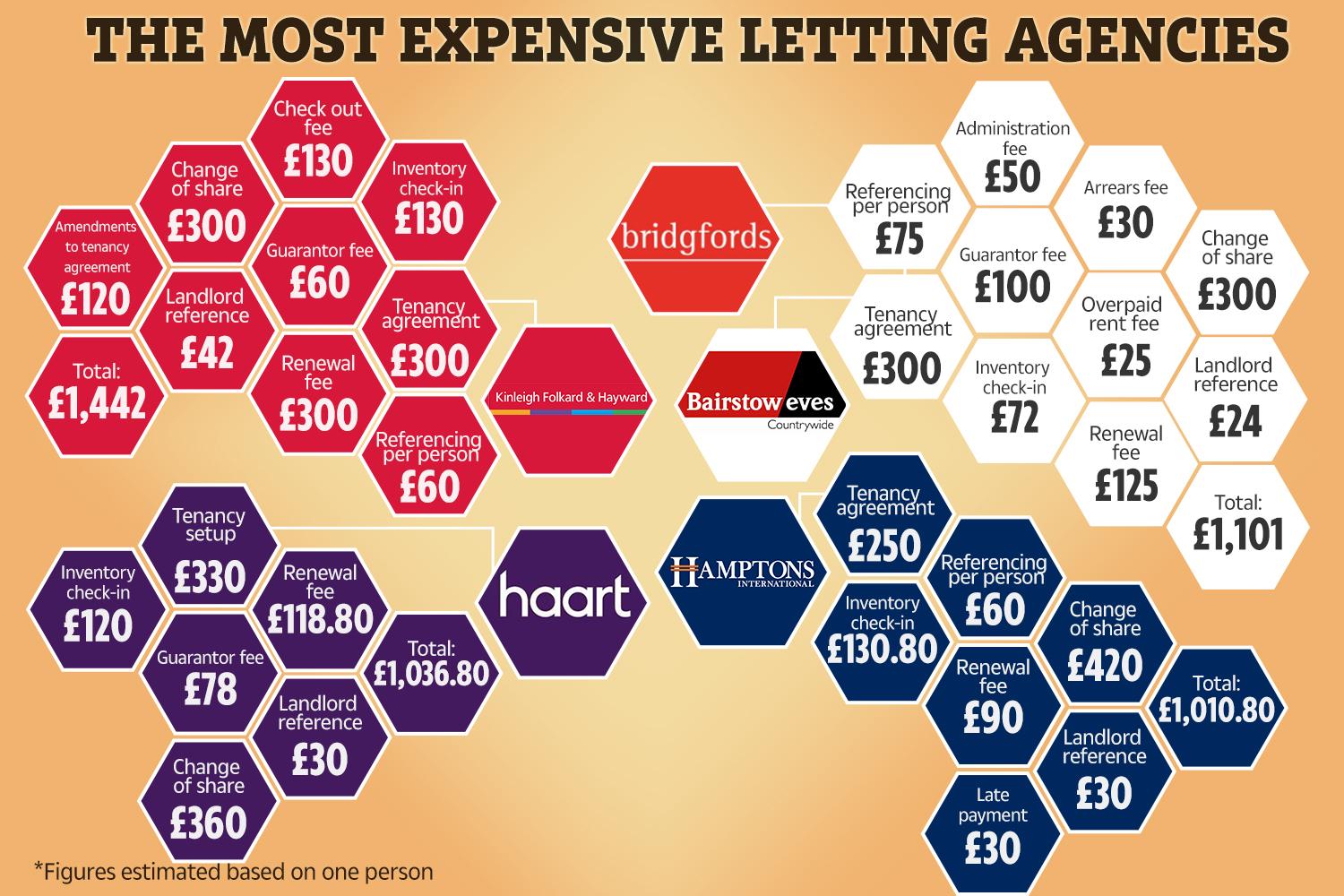 Letting agents can currently charge renters for things like referencing, viewing a property and processing fees but under the new rules, they will only be allowed to charge for tenant damages, if the tenant loses their keys and for late payment.

The ban was set the start date of June 1 last week after having received Royal Assent, meaning renters who sign tenancies after this date won't have to pay the typical fees.

Yet until then renters are still liable to pay. We asked Generation Rent to crunch the numbers, and it estimated that renters will spend roughly £153.9million on fees before the ban comes into force.

This was based on the typical household of two adults paying £404 in letting agency fees when moving home, while renewals cost £117 on average and check-out fees £121.

There are around 4.692 million private renter households in the UK and 25 per cent of those moved home in 2016/2017, according to the English Housing Survey.

People who rent their homes face a lottery in the fees they'll be charged once they pick a property, and The Sun found that Kinleigh Folkard & Hayward – the smallest of the 20 biggest property agency brands in the UK – was the most expensive.

Meanwhile, other agencies charge "only" £90 to renew a contract.

Foxtons, which used to be among the four most expensive estate agencies, has dropped to eight place after it reduced its tenancy set-up fees from £420 to £250 per person.

Meanwhile, Countrywide had three of its brands – Bridgfords, Baristow and Eves as well as Hamptons – come out as the most expensive ones, while Connells had two of their brands.

We looked into the 20 biggest property agencies in the UK based on the number of available properties in October, according to research by EA League Tables.

Online estate agency Purplebricks was the clear winner with more than 21,000 listed properties at the time, while estate agency giants such as Foxtons and Savills came in the eighth and ninth spot, respectively.

We took a look at all of their fees, below are the eight most expensive ones. 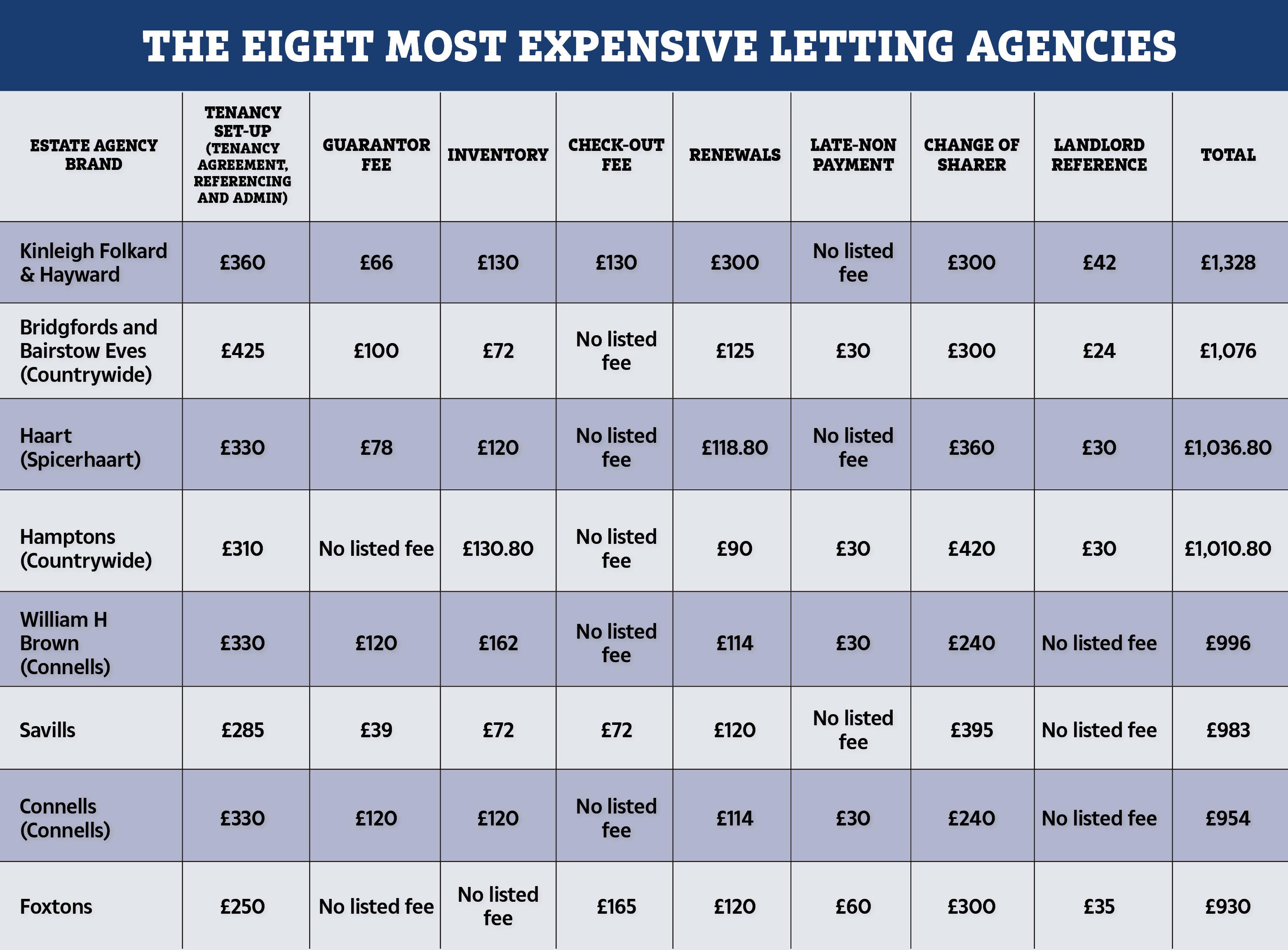 A labyrinth of fees

All estate agencies are required by law to publish their fees, yet it can be confusing as some charge a different set of fees depending on who you are, while some also overlap.

Also keep in mind that charges can vary across the country for some estate agencies, while the charges for inventories depend on the number of bedrooms in your property and whether it's furnished or not.

For the table above, we based it on one person and included the minimum charges for inventories – so if you're moving into a big home, you're likely to be charged more.

The research included data on all the major high street estate agencies apart from one – Ludlow Thompson – which would have come at the top if it had more listed properties at the time we did the research.

In fact, it charges a £420 admin fee and a whopping £432 if you decide to move out and need to change the name on a contract.

Also keep in mind that there may be other smaller estate agencies that charge even more, so always double-check the fees before you transfer the deposit or sign any papers.

The most expensive letting agency brands 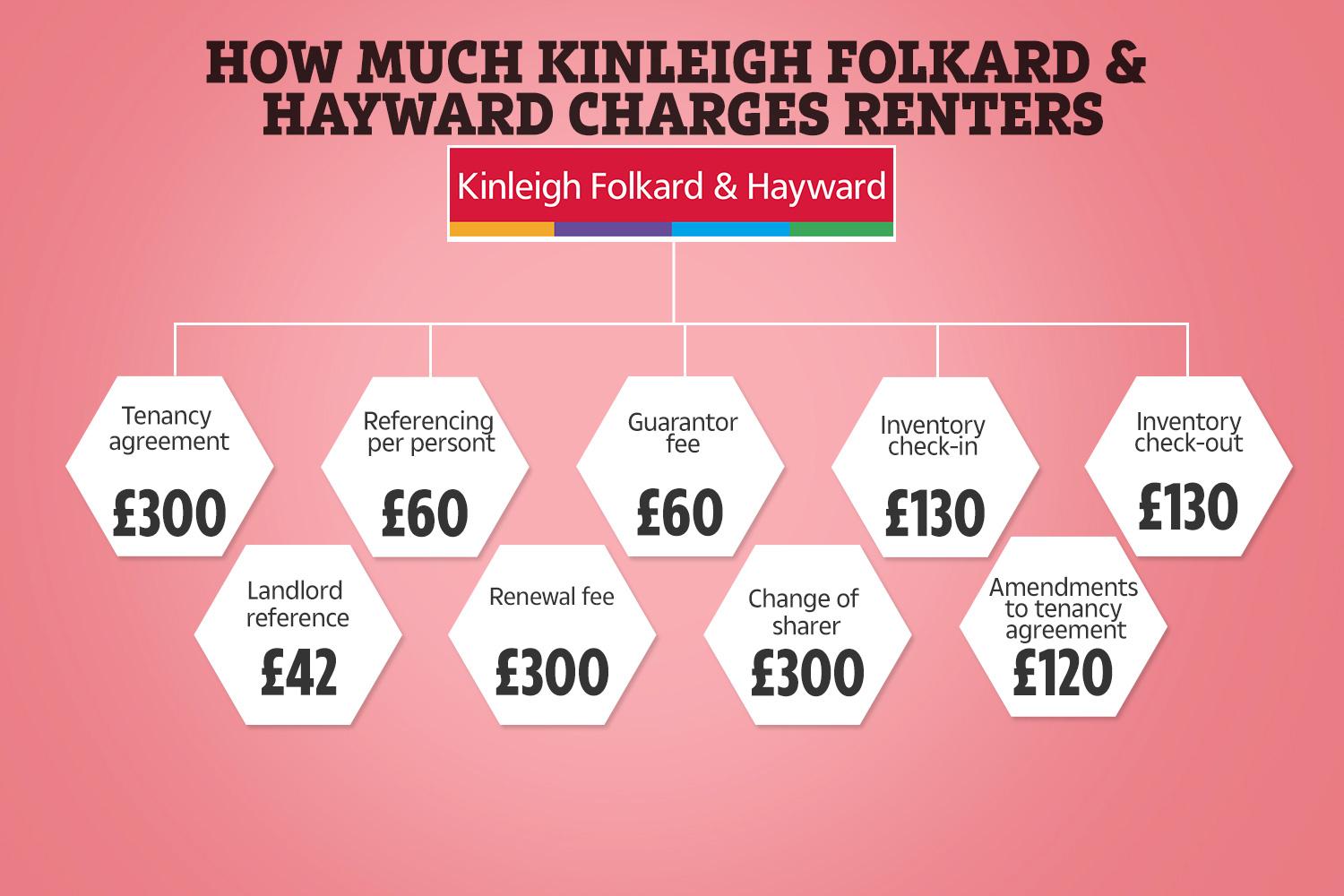 The London estate agent has over 60 branches just in the UK capital, and it comes with the most expensive fees.

It charges £300 to prepare a tenancy agreement, as well as £60 in referencing charges per person and £66 per guarantor.

It also charges £130 per tenancy check-in, and should you want to renew your tenancy later on, you'll be charged another £300.

It also hits renters with £130 fees when they move out as well as £300 if they want to move out earlier than agreed and therefore change the name of the contract.

The agency had 2,236 listed properties in October.

The Sun contacted Kinleigh Folkard & Hayward for a comment. 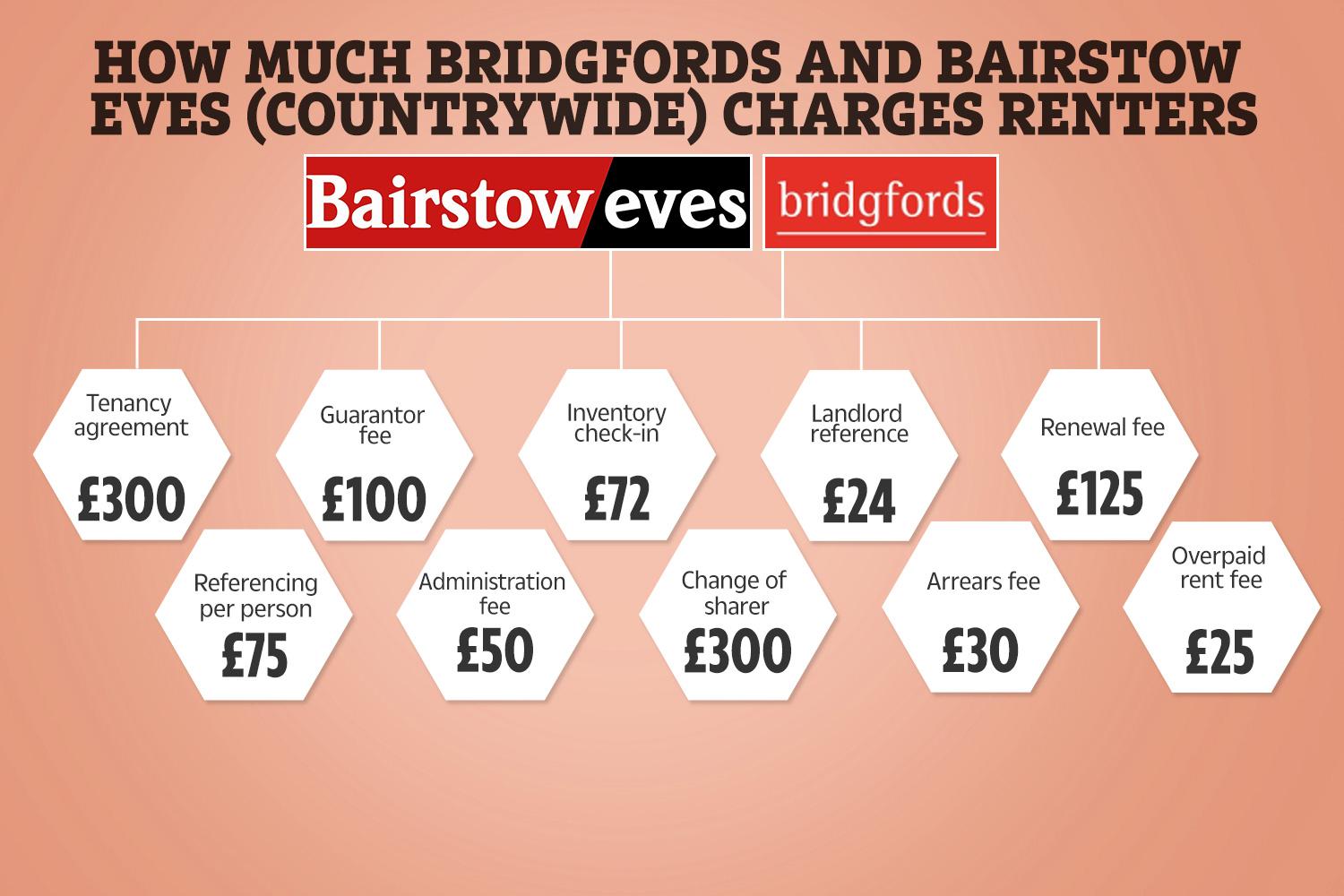 Countrywide's two brands Bridgfords and Bairstow Eves charge the same fees, and they're the second most expensive, according to our research.

Bridgfords currently has over 80 high street branches, with most of them located in the North of the UK, while Bairstow Eves are bigger in London and the South East.

The two estate agency brands charge a tenancy agreement fee of £300 as well as a referencing fee per tenant of £75 and an admin fee of £50.

Should you want to move out earlier and therefore need to change the name on the contract, you'll be charged a whopping £300.

Bridgfords and Bairstow Eves had 2,949 and 2,305 listed properties in October, respectively. 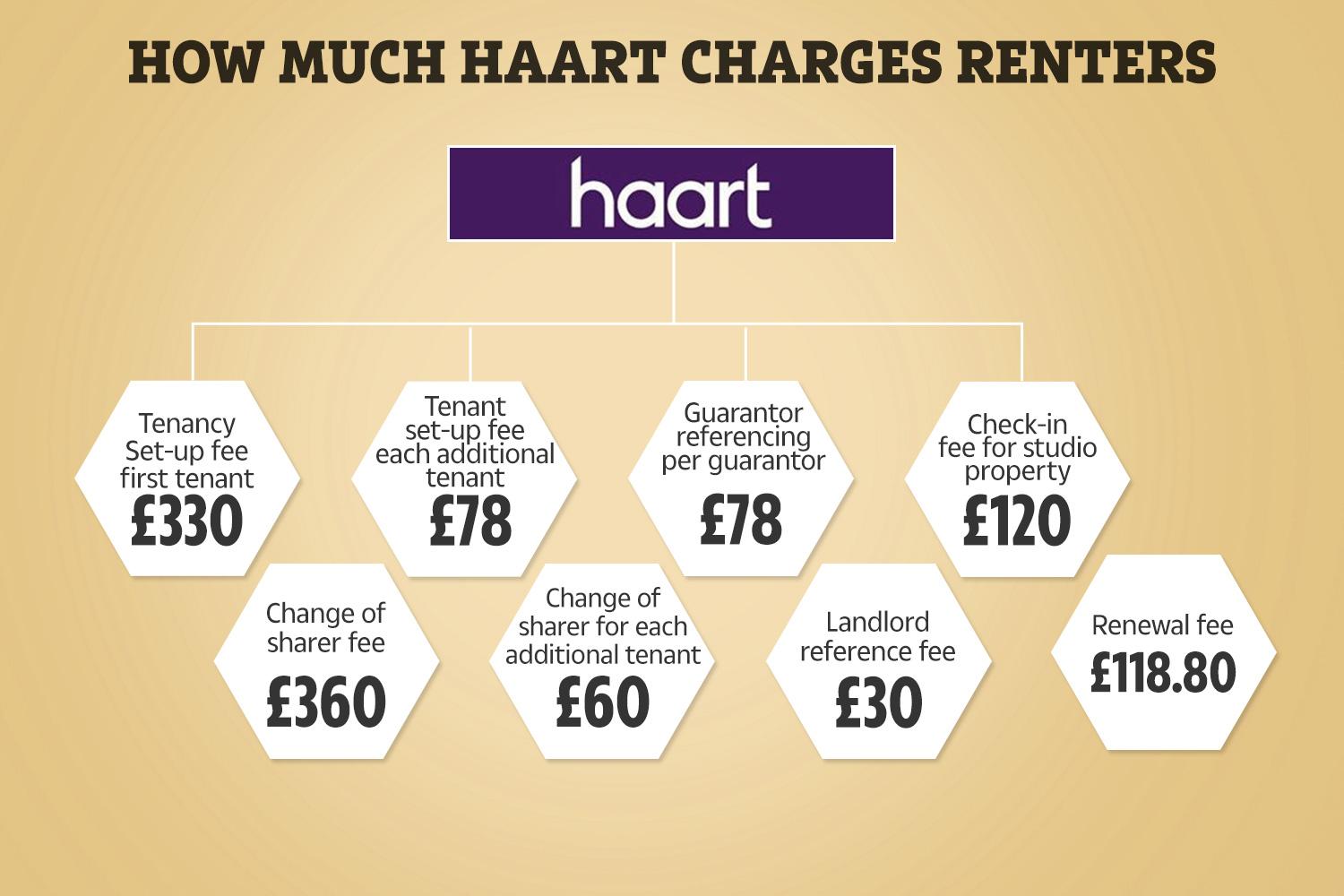 Haart is owned by property agency Spicerhaart and it has over 100 branches.

It charges £330 for setting up a tenancy and then £78 per guarantor.

If you for whatever reason have to move out earlier and end the tenancy agreement earlier than planned, you'll have to pay a whopping £360 just for changing the name on the contract.

Once you move out and you request a reference from your landlord to give to your new landlord, you'll be required to pay £30 for the trouble.

Haart had 5,546 listed properties in October.

Haart declined to comment when contacted by The Sun.

How to haggle with your landlord and bring down your rent

To increase your rent your landlord must send you a section 13 notice which gives you a month's notice in writing telling you how much your rent will be increased by and the date when your rent will go up.

At this stage you should try to talk to your landlord and come to a fair agreement on how much rent you should pay.

Your landlord can only raise your rent if you agree to the increased price.

Matt Hutchinson, communications director for flatsharing website SpareRoom.com said that if you are a good tenant then you've got bargaining power.

"The first thing to bear in mind is that demand is lower at the moment than over the past couple of years.

"That means you’ve got a bit more bargaining power, especially if you’ve been a good tenant, as your landlord won’t want the expense and hassle of having to find another tenant and even potentially face a period with the property empty.

"Failing that, it’s worth seeing if you can get anything thrown in with a rent increase, such as minor bits of redecorating or any bills."

Landbay have a free rent check service to see how much rent you should be paying in your area.

You can find the rent check service here.

Find out more about how to haggle with your landlord to bring your rent down here. 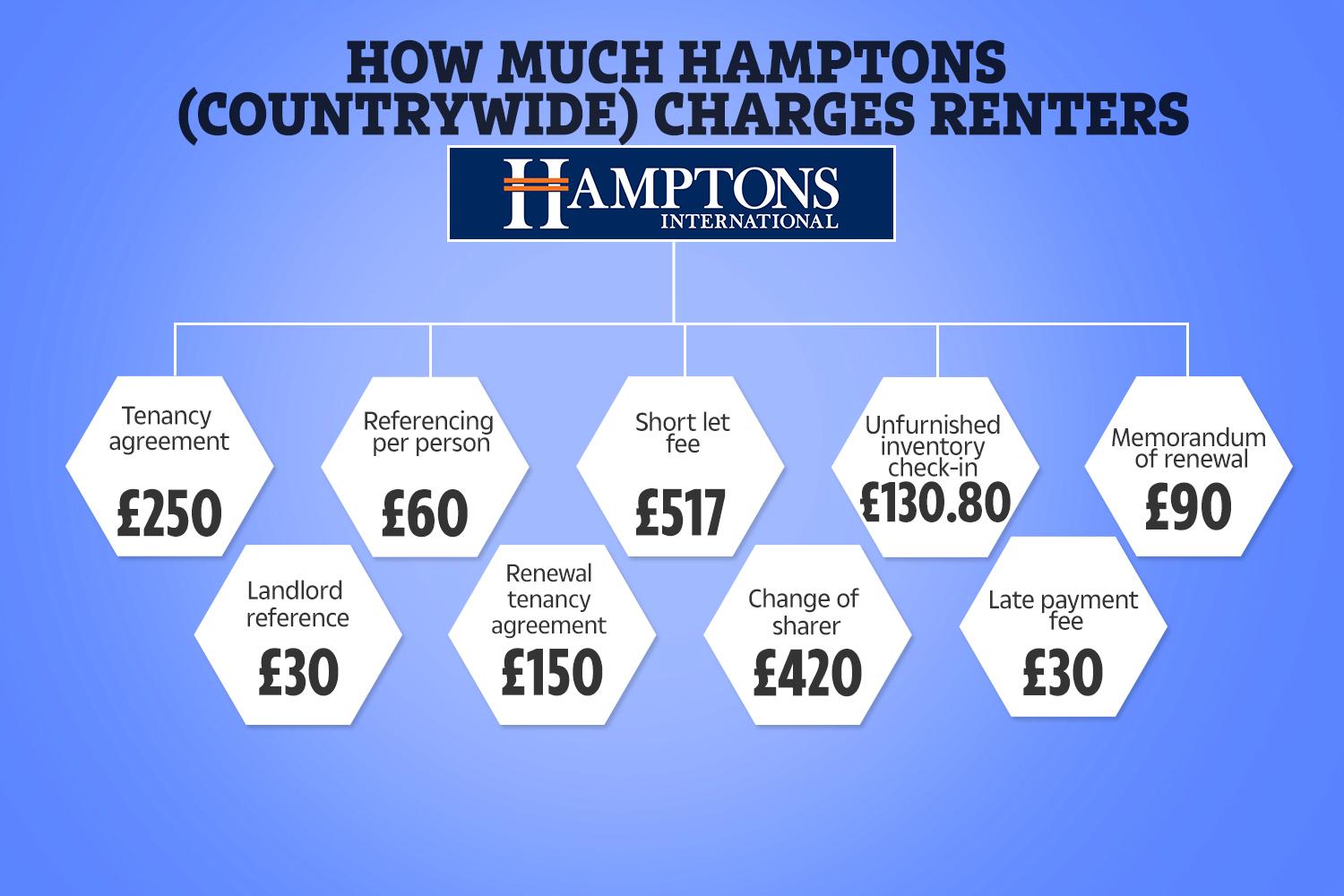 Another of the big agents, Hamptons International, has over 90 offices across the UK.

It was started in 1830 when William Hampton opened a shop in Cranbourn Street in London, and was bought by Countrywide in June 2010.

Other fees include a whopping £420 to change the name on the contract and £30 for references for future landlords.

It will also charge you two confusing fees when you renew a contract. If you just need a contract that confirms the details of your tenancy agreement, you'll be charged £90 in a so-called "tenancy renewal memorandum".

Or if you need to make major changes to the tenancy agreement, you'll be charged £150 to renew it.

Connells had 5,697 listed properties in October. 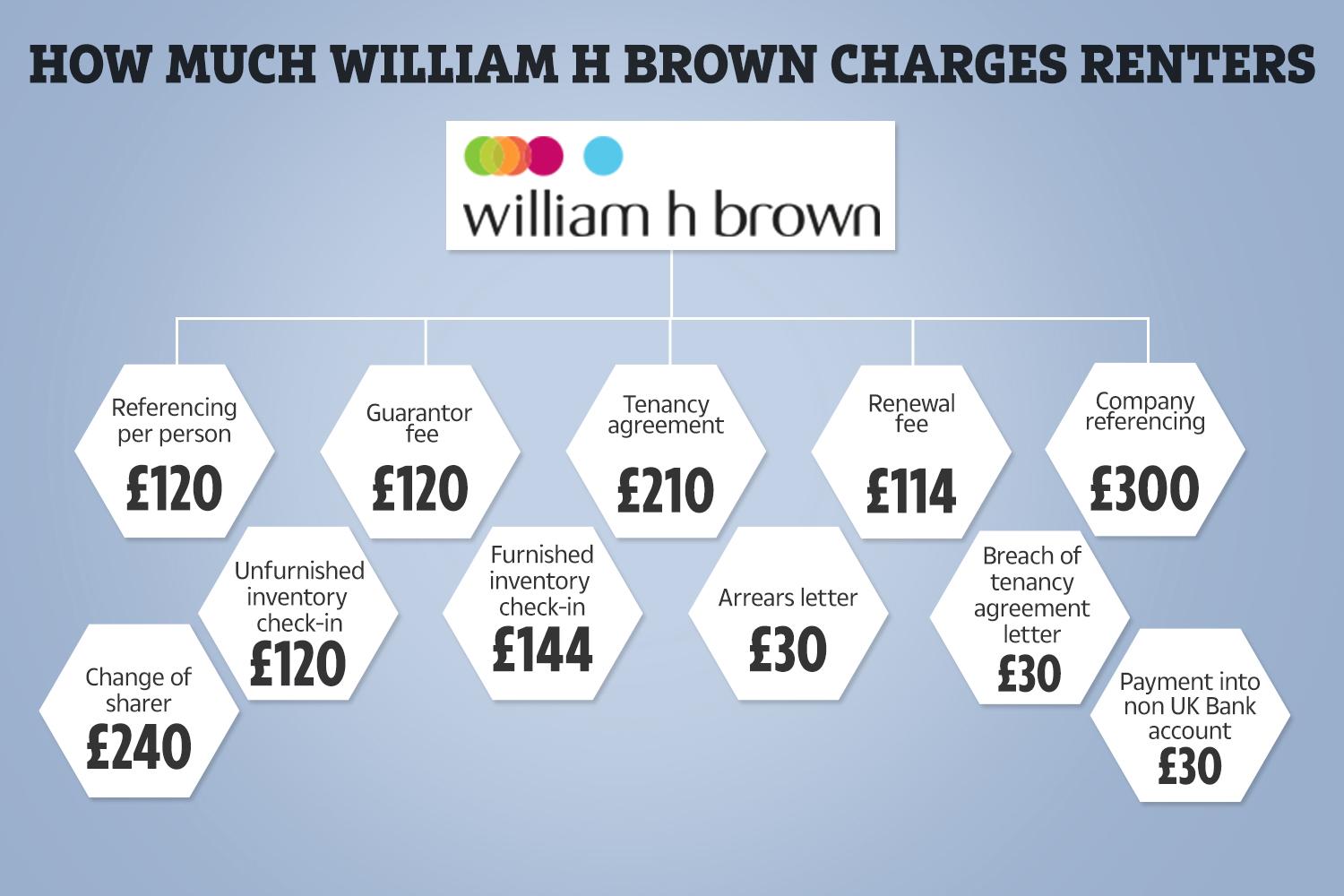 The fee for writing up a tenancy agreement is £210, while you'll have to pay £120 for each tenant and guarantor reference too.

Meanwhile, an inventory of an unfurnished property costs £120 while it rises to £144 if the property you're moving to is already furnished.

So if you, for example, move into a furnished one-bedroom flat, require a guarantor as well as an inventory, you'd rack up fees totalling a whopping £594.

If you then also miss payments and Connells send out letters to remind you, you'll be hit with another £30 per letter.

Connells had 5,697 listed properties in October. 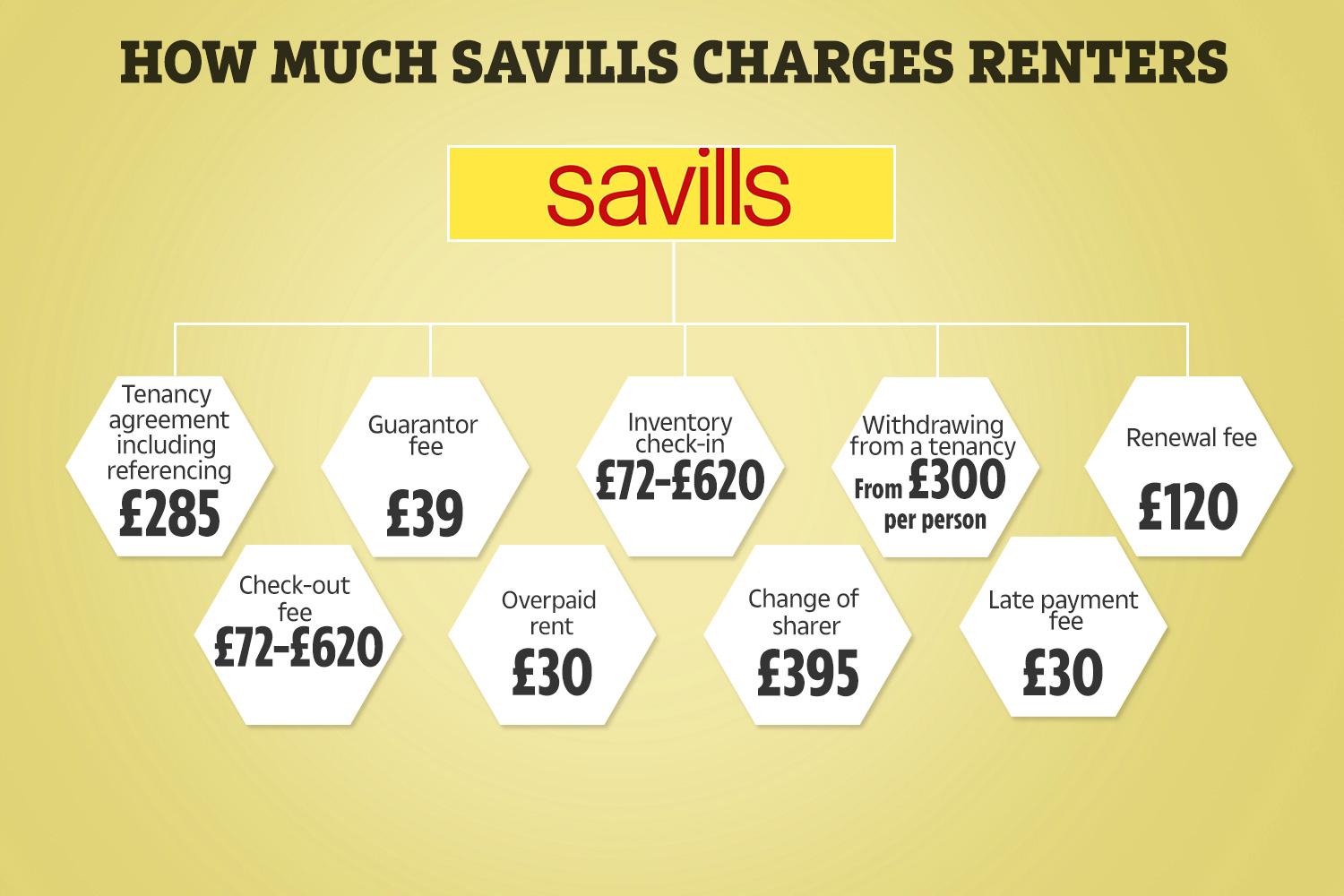 The property agency has over 100 offices across the UK, and over 600 offices worldwide with a total of 35,000 staff members.

Savills charges a tenancy set-up fee of £285 per tenant as well as £39 if a guarantor is also required.

Its fees for inventories range from £72 to a whopping £620 depending on the size of the property and whether it's unfurnished or furnished.

It also charges the highest fee among the estate agencies should you need to move out earlier, and therefore change the name on the contract.

If you fall behind on your rental payments, you'll be charge £30. You'll also be charged the same to get it back if you accidentally pay too much.

The ban on tenant fees will come into force on June 1, but there are ways to avoid the fees even before the ban hits.

Tenancy deposits may also soon become a thing of the past as renters could pay into an insurance scheme instead.

Meanwhile, an estate agency has been slammed for charging renters £300 just for viewing a property.