February hasn’t even arrived, but you can rest assured that the Valentine’s Day candy hybrids have begun. For Kit Kat lovers out there, there’s a very specific excitement on the horizon — Red Velvet Kit Kats have been spotted for Valentine’s Day and the world is already obsessed. It’s not unusual to see some exciting Kit Kat flavors, but often they land in other countries rather than right here in the US of A. There were the gold Kit Kat bars in Japan, millennial pink Kit Kats that have recently landed in South Korea, and the Kit Kats filled with actual cake which were again found in Japan, because they seem to have all the luck. But these red velvet darling are for the United States of America — so we finally have something to celebrate.

Spotted by junk banter on Instagram, bags of these individually-wrapped treats are hitting the selves — and the internet. They’re already listed on the Wal-Mart website for a very reasonable $2.98 and they’re starting to be seen at other sites, like Candy Warehouse. With Valentine’s Day still a few weeks away, you have some time to get your hands on them — but they do seem to be limited edition, so no dawdling.

Though they’re white rather than red like traditional red velvet cake, Hershey’s has confirmed that the candy is red-velvet flavored and then the whole things is coated in a white creme, according to Delish. So it’s definitely packing that red velvety punch. If you feel like you really need a little more on the cream cheese frosting side of things (and you should), my personal recommendation would be to pair these with a very classy mug of cream cheese frosting and dip to your heart’s content. What could possibly go wrong? There are a lot of different ways that you could celebrate Valentine’s Day, but if at some point you don’t have a fistful of icing, then does it even count? 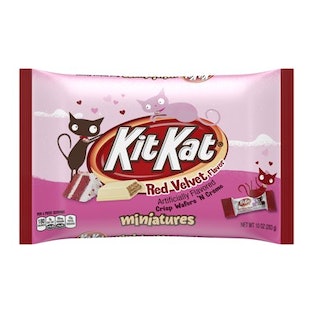 They’ve only been recently discovered, but people are here for the Red Velvet Kit Kats in a big way. Even though red velvet definitely had a moment a few years ago and hasn’t been seen as much in the last 12 months or so, it’s a classic flavor for a reason. If the emergence of these Kit Kats prove one thing — that there is goodness in this world and that red velvet will never die. OK, so they prove two things.

If you’re looking for other delicious Kit Kat hybrids available in the US, then you’re in luck. Kit Kat Drumsticks were recently revealed to the world, a Kit Kat-ice cream mashup sure to satisfying anyone with taste buds and a heart. There are bits of Kit Kat wafer in the chocolate shell and then a fudge center in the middle of the ice cream. Although a lot of the most intriguing and sometimes ridiculous flavors of Kit Kats seem to appear overseas, Hershey’s also makes sure to deliver us so some Kit Kat amazingness right here are home.

Though February isn’t here yet, it’s clear that candy makers are already upping their game and letting some of their new creations out into our streets and straight into our mouths. Valentine’s Day is nothing but an excuse to eat candy for breakfast every day for a month, so open up your minds and mouths and explore the deliciousness coming your way. Red Velvet Kit Kats may only be the beginning.