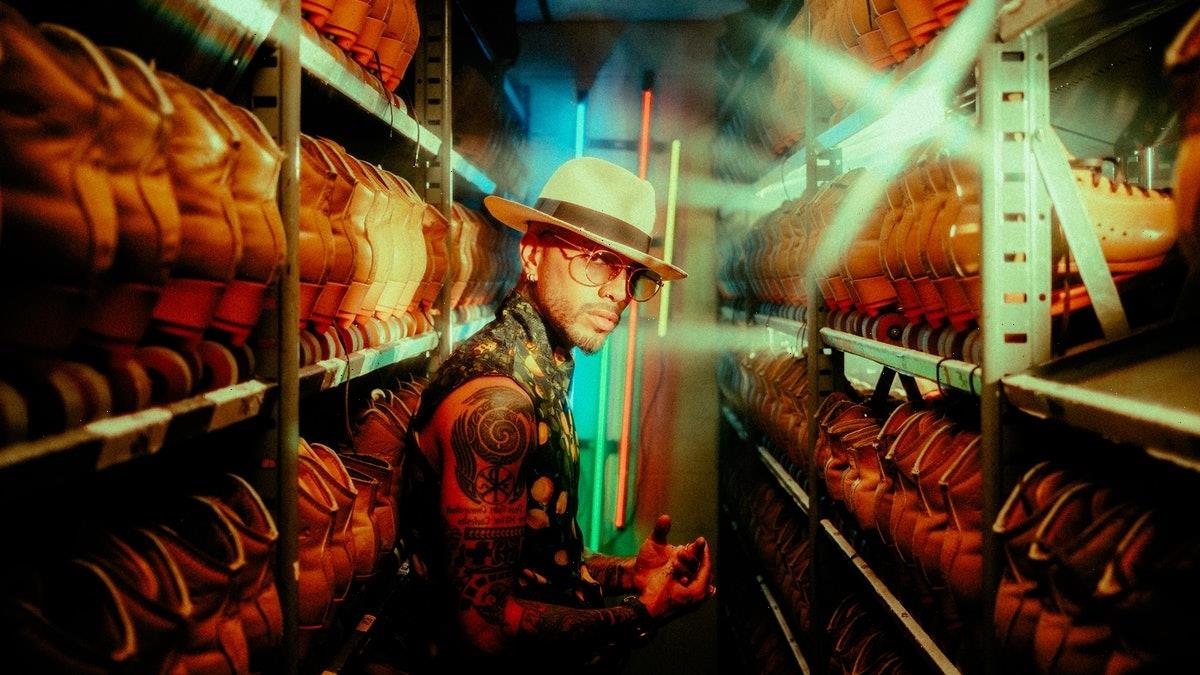 Rauw Alejandro has the biggest Latin song in the world right now. “Todo De Ti,” which translates in English to “All of You,” has spent the past month at No. 2 on Spotify’s Global 200 chart, just behind Olivia Rodrigo. And the retro music video for the funky love song has taken off with similar ardor—it has over 170 million views on YouTube and there’s an entire movement on TikTok based around the song. In the video, Alejandro engages in a dance battle with his own alter ego at a roller rink. One version of Alejandro, clad in a black leather jacket, pops-and-locks, while the other spins in circles on skates. There’s a fluidity in his movements as he seamlessly switches between the two personas, flashing his megawatt smile on both. The world wants all of this modern-day song-and-dance man, and Alejandro is giving us just that.

One day after shooting with J.Lo for her new video “Cambia El Paso,” Alejandro calls over FaceTime from his hair and makeup chair. He’s got a busy docket, and is scheduled to film more videos for his new album Vice Versa, which comes out today. “My inspiration are all the showmen: like Prince, Michael Jackson, James Brown, and Chayanne,” the 27-year-old says. “When I started doing music, that was my vision since Day One. I want to be this kid that goes onstage and channels my art through my vocals and my moves.”

Before becoming such an in-demand artist, Raúl Alejandro Ocasio Ruiz posted music on SoundCloud from his mother’s house in San Juan, Puerto Rico. Even back then, Alejandro never boxed himself in by making one genre of music. And Vice Versa runs the gamut, too—from the reggaeton and Latin trap that put him on the map to the R&B that caught the attention of his label Duars Entertainment in 2017. Alejandro owes his versatility to his multicultural upbringing; as a kid, he split his time between Puerto Rico and his father’s place in New York City.

“These rock ‘n’ roll bands, the oldies, and the soul music—all that type of music, I learned because of my dad,” Alejandro recalls. “He also played the guitar. In P.R., I was raised with the reggaeton culture, and salsa, and merengue. I have all this mix of flavors from my childhood.”

Behind the scenes at the video shoot for “Todo de Ti.”

Last November, Alejandro released his debut album, Afrodisíaco, or “Aphrodisiac,” which featured heavy-hitters in Latin music like Colombian superstar J Balvin, Boricua OGs Wisin y Yandel, and Spanish singer-songwriter Rosalía. His Latin Grammy nomination later that month for Best New Artist solidified Alejandro as a force in the Latin music industry. Since the beginning of 2021, he’s broadened his vision to the pop market—but the genre’s stars, including Selena Gomez, are coming to him to sing in Spanish. In January, the two teamed up for the sultry “Baila Conmigo” from Gomez’s Revelación EP.

Apparently Tainy’s word about Alejandro being a proven hit-maker got out—because a month later, Alejandro was photographed in a Miami recording studio with Christina Aguilera. She’s working on the long-awaited follow-up to her first Latin album, 2000’s Mi Reflejo.

“Another legend!” Alejandro says. “That’s a GOAT [greatest of all time]. She’s working on some dope stuff. I had the chance to meet her and talk about future projects. We’re planning to do some stuff together. But that day, I was more like a fanboy. In that moment I was like, ‘I’m with Christina. I need to take a picture.’”

Alicia Keys also recently enlisted Alejandro for a Spanglish remix of her song “Underdog”—and now, you can add Jennifer Lopez to his list of collaborators. This month, the paparazzi photographed him with J.Lo recording her music video “Cambia El Paso” in Miami. “J.Lo is the queen!” Alejandro adds. “We were filming for that song, which is crazy.”

“Todo De Ti” sounds like nothing that Alejandro has put out before. It’s the perfect kick-off to Vice Versa, one that sees him branch out to drum ‘n’ bass in “Cuando Fue,” EDM-inflected reggaeton in “Sexo Virtual,” and Eighties-inspired synth-pop in “Desenfocau.” “It’s a game-changing album. I’m betting all my spirit on it,” he affirms. Alejandro also cut down on the collaborations, only featuring fellow Boricua singer Lyanno and Brazilian pop star Anitta on the LP.

“This album is more personal and about me,” he says. “Lyanno is my homeboy from P.R. We started out together. I did Brazilian funk in ‘Brazilera’ and I was like, ‘I need the OG on this record.’ We called Anitta and she killed it.”

With these new songs tailored to Alejandro’s abilities as a dancer, his U.S. tour will be one to watch out for this summer and fall. This will be his chance to show off his showman side, now that Covid-19 restrictions for concerts are being lifted across the country.

“We’re preparing a crazy show that I know people have never seen from a Latin performer,” Alejandro says. “I’ve been training so hard. I want to raise the bar for Latin music and put the Latin industry on a whole other level. I want to inspire other people like so many artists inspired me.” With a smile, he adds, “I want to be a GOAT in the future.”