The Brooklyn Dodgers traded for the Chicago Cubs’ All-Star Randy Jackson in December 1955, hoping he would become their regular third baseman.

Injuries limited his playing time during the next two seasons, but on Sept. 28, 1957, when he delivered a three-run homer against the Phillies in Philadelphia, Jackson became a footnote in the history of a storied franchise.

Jackson, who died on Wednesday morning at 93 at his home in Athens, Ga., was the last Brooklyn Dodger to hit a home run.

The Dodgers were playing their next-to-last game when Jackson’s drive landed in the upper left-field stands at Connie Mack Stadium off a pitch from the right-hander Don Cardwell, propelling Brooklyn to an 8-4 victory in a series that followed the Dodgers’ final home games at Ebbets Field.

Jackson was an unlikely candidate for his melancholy achievement: He had hit only one other home run that season, and he played in just 48 games while hobbled by a leg injury. And that home run seemed nothing special to him when the third-place Dodgers closed out their history the next day with a 2-1 loss to the Phillies, the last Brooklyn pitch delivered by an unproven left-hander named Sandy Koufax.

Earlier in that summer of ’57, when the Dodgers were on the brink of moving to Los Angeles and the New York Giants seemed headed to San Francisco, the Brooklyn-born comedian Phil Foster took up a lost cause with his rendition of “Let’s Keep the Dodgers in Brooklyn” on Coral Records.

The song, foreshadowing the borough of Brooklyn’s fate if its heroes fled to the West Coast, included a brief tribute to Jackson and the outfielder Gino Cimoli, though their Dodger careers were modest:

“Brooklyn would be like a pair of socks that’s holey/ Without Jackson and Cimoli.”

Jackson, in fact, had his best major league seasons playing for the Cubs from 1950 to 1955. He was a two-time All-Star with Chicago, hit 59 home runs over his final three seasons there and played alongside the future Hall of Fame shortstop Ernie Banks.

The Dodgers obtained Jackson in a multiplayer deal, expecting him to take over at third base from an aging Jackie Robinson. He arrived with a reputation for lacking fire, but as he told The Miami News at his first Dodger spring training camp, “My voice doesn’t carry more than six feet before it drops off, so what’s the use?” 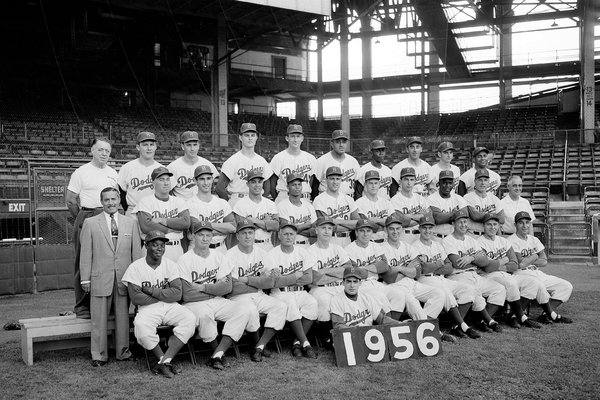 He did have his moments before that parting home run.

In June 1956, Jackson combined with Duke Snider and Gil Hodges in a barrage of three consecutive ninth-inning home runs to lift the Dodgers to a victory over the Phillies at Ebbets Field. Jackson appeared in his only World Series that fall, going 0 for 3 as a pinch-hitter when the Dodgers lost to the Yankees in seven games.

Robinson retired after the 1956 season. Pee Wee Reese, the Dodgers’ longtime shortstop, shared third base with Jackson, Charlie Neal and Don Zimmer in 1957, the Dodgers’ last year in Brooklyn.

Ransom Joseph Jackson Jr. was born on Feb. 10, 1926, in Little Rock, Ark., the son of Ransom Sr. and Ann Polk Coolidge Jackson. His father, a former Princeton University baseball captain, prospered in the 1920s running a cotton brokerage business with two partners and offices in New York, London and Paris. After the business failed in the stock market crash of 1929, he sold life insurance. The Yankee catcher Bill Dickey was a family friend.

Randy won three Southwest Conference batting titles and played halfback in two Cotton Bowl games, for Texas Christian in 1945 and the University of Texas in 1946, while enrolled in World War II-era naval officer training programs on their campuses.

He was signed by the Cubs in 1947 and made his debut for them in May 1950. Along the way he acquired the name Handsome Ransom. (“The nickname has less to do with looks and more to do with a sportswriter looking for something to rhyme with Ransom,” he wrote in a 2016 memoir, “Handsome Ransom Jackson: Accidental Big Leaguer,” written with Gaylon H. White.)

He remained with the Dodgers when they moved to Los Angeles in 1958, was sent to Cleveland late that season, then finished his career as a Cub again in 1959. A right-handed batter, he hit 103 home runs and had a career batting average of .261. During the off-seasons he worked in his family’s laundry business and sold life insurance.

Jackson’s first marriage, to Ruth Fowler, ended in divorce. He is survived by his second wife, Terry (Yeargan) Jackson; two sons, Randy and Chuck, and a daughter, Ann Bolton, from his first marriage; two daughters, Ginny Bunn and Meredith Jackson-Parton, and a son, Ransom, from his second marriage; 13 grandchildren; and eight great-grandchildren. His son Randy said the cause of death was pneumonia.

Jackson, who owned an insurance agency in Athens after his playing days, still received autograph requests in his late years, though he said some of the letter writers thought they were reaching the musician Randy Jackson, a longtime judge on “American Idol.”

That final Brooklyn Dodger home run had never registered with Jackson until he got a phone call from one of his sons in the late 1990s.

As Jackson related it to The Athens Banner-Herald: “He told me that ‘Good Morning America’ had a trivia question: Who was the last Brooklyn Dodger to hit a home run? It was me. I did not know that myself till then.”