Game Of Thrones star Kit Harington is hard to recognise at first: He sits on stage as the stalls fill for True West, Sam Shepard’s gloomy tale of fraternal rivalry.

One good reason for having him on stage as the punters arrive is that it stops fans shrieking their delight when the play actually starts.

Absent is the swashbuckling Harington known from TV. He is done up as a geeky, early-1980s scriptwriter, working at a typewriter in a south Californian bungalow. 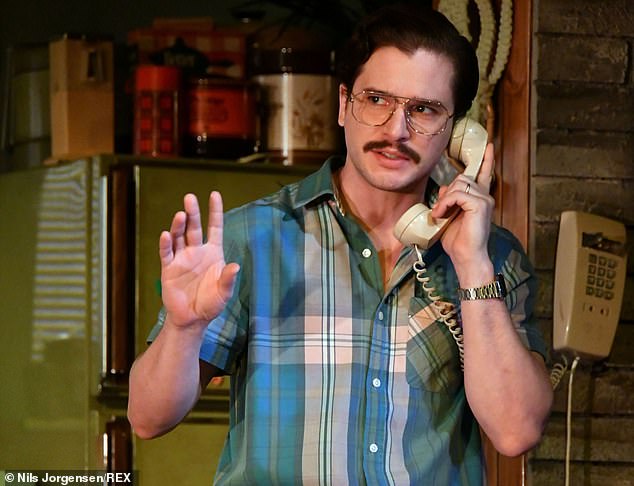 Game Of Thrones star Kit Harington is hard to recognise at first: He sits on stage as the stalls fill for True West, Sam Shepard’s gloomy tale of fraternal rivalry

His name is Austin and he is house-sitting for his absent mother. Austin has a soup-strainer moustache and dresses conservatively.

He is close to clinching a deal with a Hollywood producer (Donald Sage Mackay).

In the course of two hours, we see Austin’s world shattered by the arrival of his tough-living, blow-hard brother Lee (a brilliantly malignant, leg-jiggling turn from Johnny Flynn in low sideburns).

Mr Harington’s character turns from law-abiding dweeb into drunken petty criminal – there is a surreal scene with numerous toasters he has stolen. 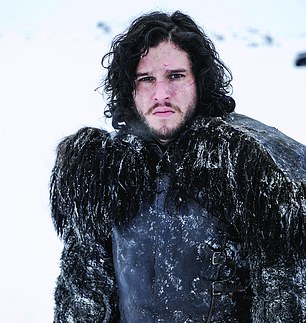 Harrington pictured in Game of Thrones

That he makes the transformation believable is more down to his impressive acting than to the script. Slowly the home is trashed.

Never a good sign, that. Playwrights who revel in physical destruction tend to underwrite their characters’ inner disarray. If you want to convey menace, obsessive neatness is probably more effective than, say, smashing a typewriter with a golf club. Mr Shepard tries to work in an idea of the wild west – the show opens at that dawn hour when ‘coyotes kill people’s cocker spaniels’.

There are some unconvincing references and a brief view of the Mojave Desert but none of it is quite enough to explain the brothers’ self-destructive relationship. Little of the plot is believable. Mr Flynn towers above Mr Harington physically but the two actors are well matched in their commitment.

Flynn only has to curl his lip an eighth of an inch to give us an idea of Lee’s malevolence.

‘Thrones’ fans may enjoy seeing their pin-up prove his stage credentials but the two lead actors deserve a stronger play than this suffocating, unsatisfying tale.