What’s the dress code for desperado Remainers? Rupert the bear, of course: QUENTIN LETTS on yesterday in Parliament

Scarfed against the wintry chill, rigid with glumness, the People’s Vote lot called a mid-morning outdoors press conference to announce that they were not going to put their vote to a vote – because they might lose, and you don’t want to risk putting something to a vote unless you know it’s in the bag.

For goodness’ sake, look what happened last time! Electorates are not to be trusted until a stitch-up has been agreed.

Do you not find that following the various positions in opposition to Brexit is a bit like following a single noodle in a bowl of spag’ bol’ and trying to work out where it ends?

The only clear one is Leave means Leave – which is the one option we are not being offered by the Westminster mummies and daddies.

Someone must have told them to wrap up. Correction: lots of us have been telling them that ever since they started agitating that another plebiscite was needed because the first one had gone against their wishes.

But yesterday they were nearly all wearing scarves. I meant ‘wrap up’ in that sense. Dress code: Rupert Bear. 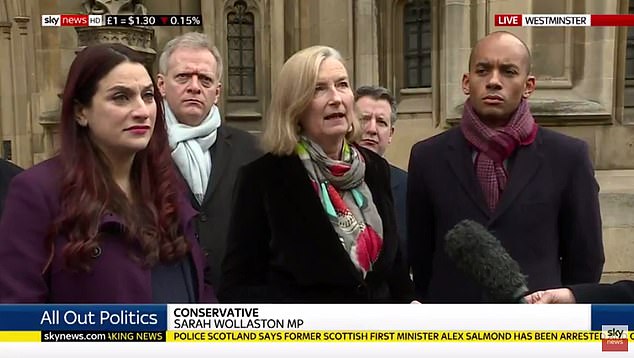 The People’s Vote lot, pictured, stood outside St Stephen’s entrance to the Commons to announce that they were not going to put their vote to a vote – because they might lose

Happy, they were not. Remainers are seldom excessively merry but yesterday’s little platoon was jaw-clenched and grim. Word had it that there had been blazing rows behind the scenes.

The People’s Front of Judea and the Judean People’s Front had been unable to resolve their differences. That rumoured new Centrist party may not prove much fun.

Mr Umunna (Lab, Streatham) was wearing the pout we saw from him on the TV coverage of referendum night, when he almost started blowing bubbles. He did not speak to the cameras yesterday. It might have come out all acidic had he done so.

The desperadoes’ frontwoman was Dr Wollaston (Con, Totnes), face pale with tragedy, hair swept to one side, eyes watery.

‘We will not be laying the amendment,’ she announced. Now we know the tone of voice in which she tells loved ones that grandpa just pegged it in the consultancy room.

Dr Lee (Con, Bracknell) stood behind her, bleak with tragedy, swaying in the breeze, or maybe to stay in camera shot. Miss Berger (Lab, Liverpool Wavertree) was given a chance to speak.

She seized it, as she always will. Drawn to a camera lens as a spaniel to the smell of sausages is that one. 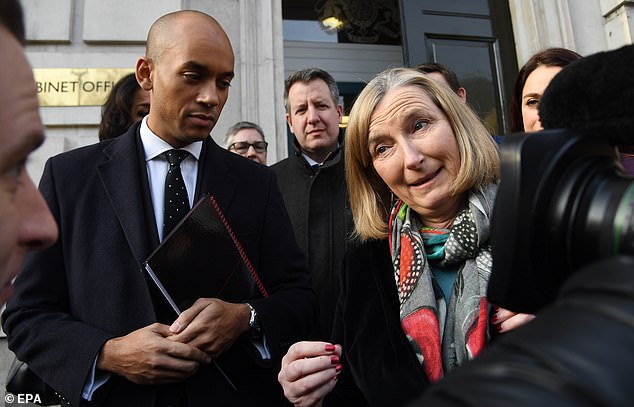 The desperadoes’ frontwoman was Dr Wollaston (Con, Totnes), face pale with tragedy, hair swept to one side, eyes watery

She was jolly cross with Jeremy Corbyn for not caving in to their second referendum idea – even though Labour’s manifesto promised to respect the result of the 2016 vote.

‘Regrettably,’ she said, steaming with pique, ‘the Labour leadership won’t commit to an achievable policy.’ This, she thundered, was ‘not good enough’. Ah, the authentic, patronising terminology of our quailing elite on its eroding island of influence.

Reporters started to hurl a few questions. Dr Wollaston’s face darkened. Miss Berger snapped that ‘democracy didn’t stand still in 2016’. But this, arguably, is exactly what it has done, at least at Westminster.

Parliamentarians have refused to accept that the British people gave them a spanking and told them that the European Union no longer had their assent.

Miss Greening’s policy stand on Brexit may be just as anti-democratic but she at least has a certain vim and twinkle about her. In Dr Wollaston that is lacking. She looks pretty thoroughly miserable.

Having come to politics quite late in her career via an open primary (ie. less party political), she was once pro-Brexit but switched for under-examined reasons. Now she seems adrift, hunched, disorientated. Might her abilities not be better used back in the health service?