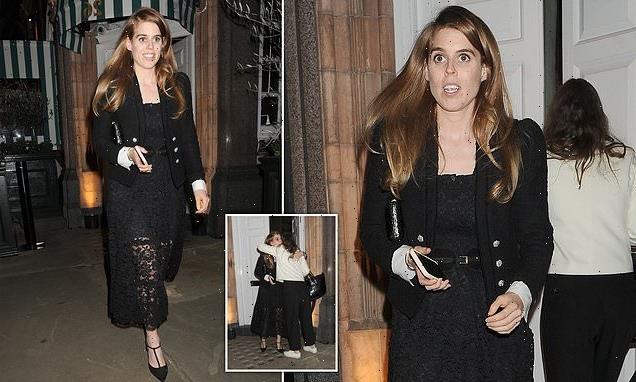 Beatrice’s LBD! Princess is polished in a daring lace frock and black strappy heels as she joins a friend for dinner at Harry’s Bar in first outing since her name was linked to fraud case

The Queen’s granddaughter, 33, showed a classic LBD never goes out of style as she headed out for dinner at the ultra exclusive eatery in London’s Mayfair.

She wore the frock, which featured a daring sheer panel below the thigh, with a classic black blazer, black handbag and black strappy heels. 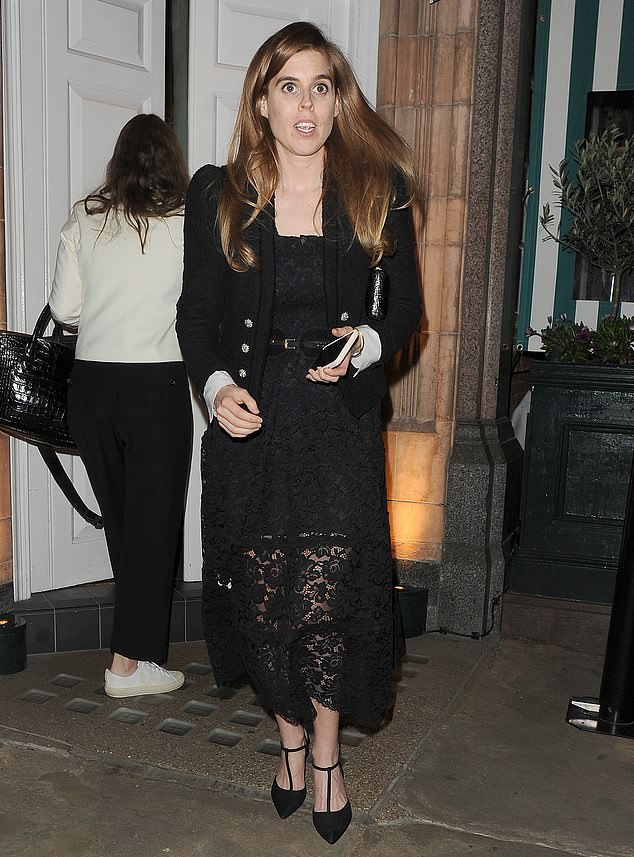 Sophisticated: Princess Beatrice stepped out in a black lace dress for dinner at Harry’s Bar 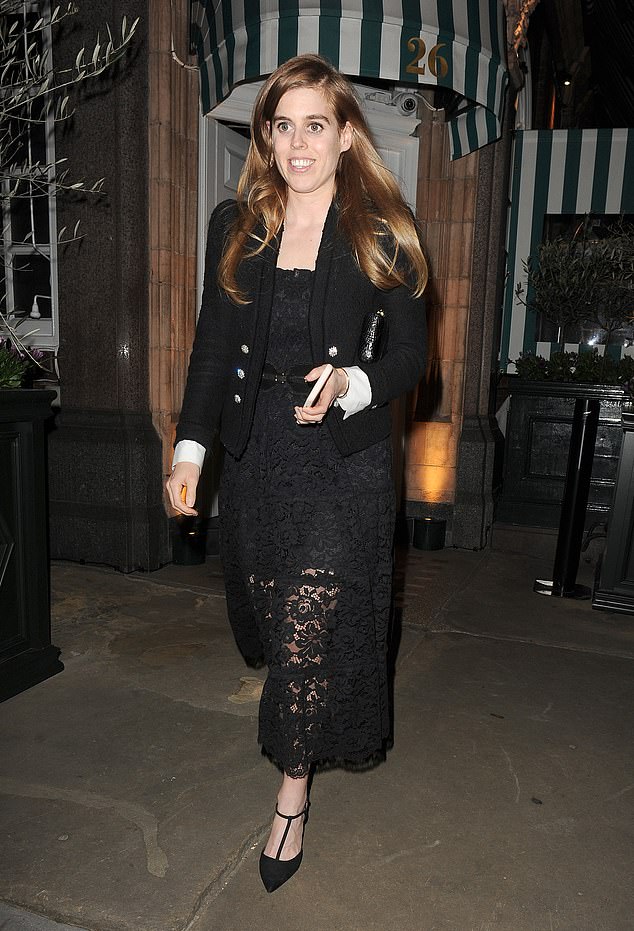 Can’t beat an LBD! The royal, 33, proved sometimes less is more with her monochrome outfit 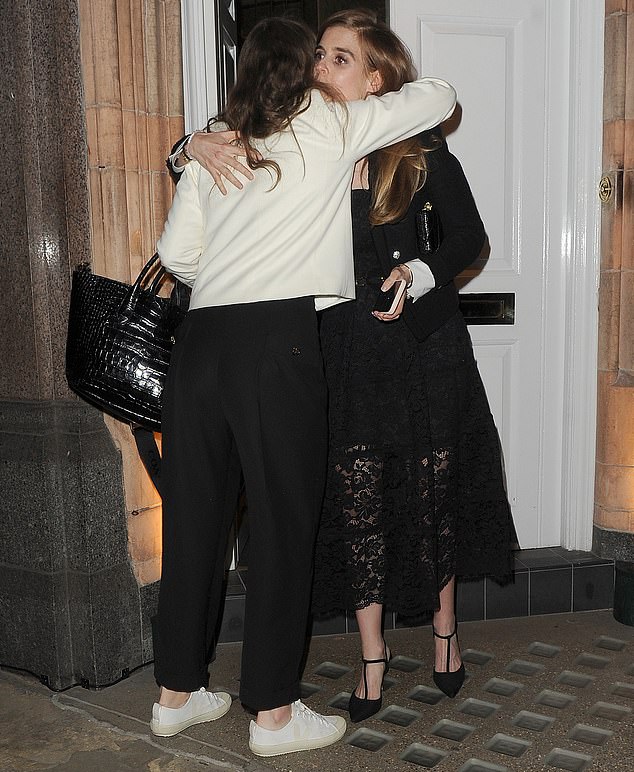 A hug goodbye: The Queen’s granddaughter embraced her friend before leaving Harry’s Bar

It is the first time Beatrice has been seen since her name was linked to a fraud case involving Turkish businessman Selman Turk.

Princess Beatrice has complained to friends she was blindsided by revelations that Mr Turk provided a £750,000 ‘wedding gift’ ahead of her marriage.

She had no idea that anyone outside her family had sought to contribute to the cost of her wedding to Edoardo Mapelli Mozzi in July 2020 before lurid reports making the allegation appeared last week.

Putting her best foot forward: Beatrice finished her look with a pair of black strappy heels 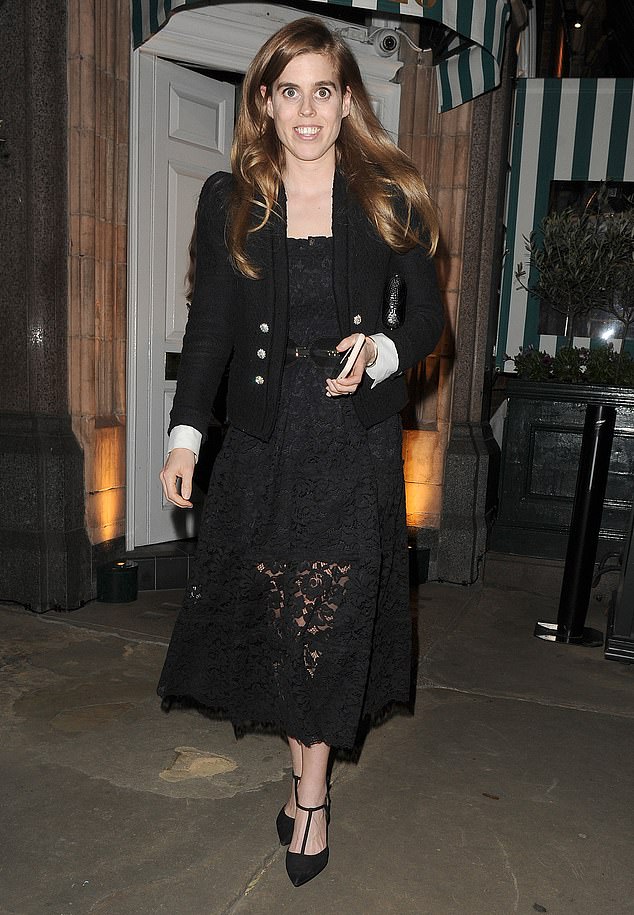 Exclusive address: The royal joined her friend at Harry’s Bar, a private members’ club in Mayfair

A friend of the Princess told the Mail On Sunday: ‘She knew nothing about this, poor thing.’

Documents from a complex fraud case last month revealed that the mysterious £750,000 gift was transferred to the Coutts bank account of Beatrice’s father, Prince Andrew, at the request of Mr Turk.

The papers say that, in addition, Beatrice’s sister Eugenie was paid £25,000 at the behest of Mr Turk and that her mother, Sarah Ferguson, received payments of at least £225,000 from him for work that she had carried out for a US firm called Pegasus Group Holdings.

Prince Andrew received a separate sum of £350,000 from Mr Turk, the papers state.

Putting on a brave face: Beatrice smiled as she was seen for the first time since her name was linked to a fraud case 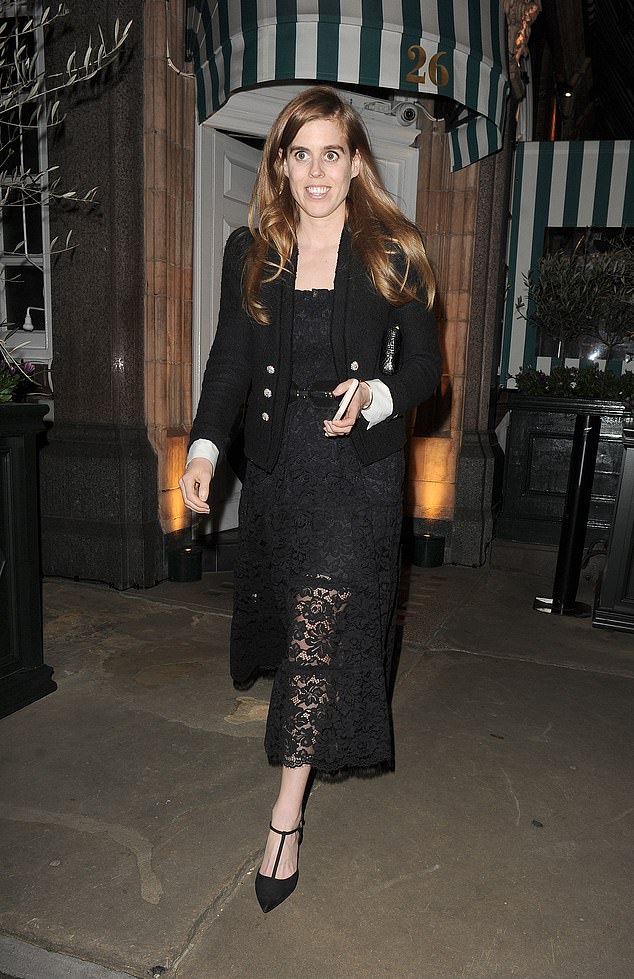 Night on the town! Beatrice looked delighted to be joining a friend for dinner in Mayfair 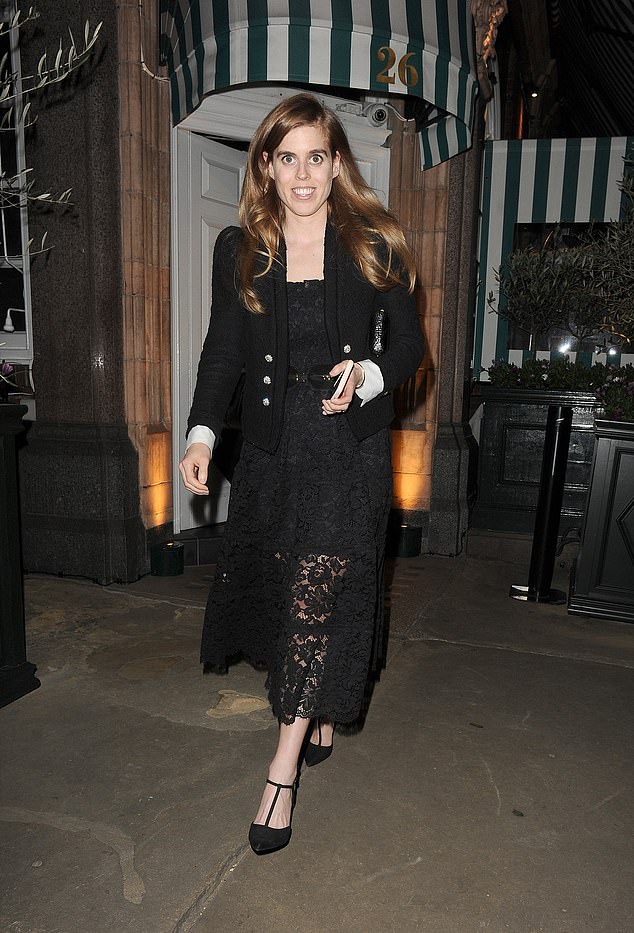 Radiant: Beatrice left her auburn locks loose and flowing around her shoulders for the outing

Mr Turk, an ex-Goldman Sachs banker, is being sued by Nebahat Evyap Isbilen, a millionairess who fled Turkey for Britain after her MP husband was jailed.

Mrs Isbilen, 77, claims Mr Turk stole £40 million from her. Of that sum, she alleges about £1.1 million went to Andrew and his family.

There is no suggestion of wrongdoing by the Prince or his family and they are not central to the case, which is at an early stage.

But any troubles appeared far from the Princess’s mind last night and she gave her friend a hug goodbye and flashed a smile to photographers as she made her way home.

The royal left her glossy auburn locks loose around her shoulders and kept her makeup to a minimum.

All in the details: Beatrice added a black belt to cinch the waist of her pretty lace frock