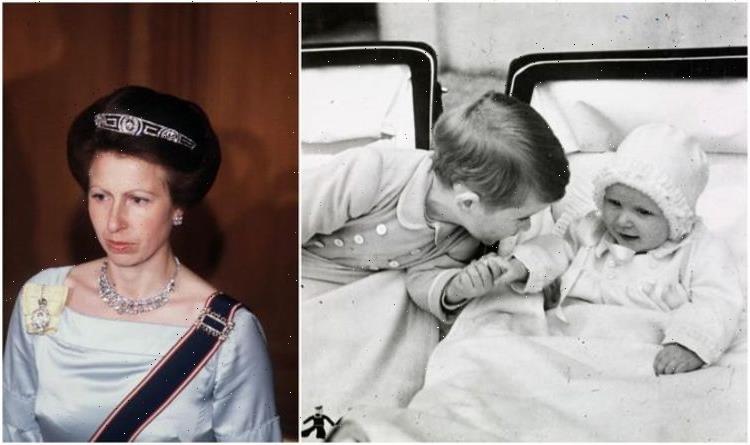 On his official Twitter account, Prince Charles posted a happy birthday message to his younger sister, Princess Anne. The post read: “Wishing the Princess Royal a very Happy Birthday today. “In this photo from 1951, The Prince of Wales squeezes his younger sister’s hand while sitting in their prams in the Clarence House garden.”

Prince Charles and Princess Anne have a very close relationship due to them only having two years difference in age, and being in the public eye their entire lives.

They were both very young when Queen Elizabeth took the throne in 1953, with Princess Anne only two years old.

Both the royal children spent a lot of time together as children.

Queen Elizabeth ascended the throne when Charles and Anne were toddlers, and a royal insider told Hello Magazine that the two “relied on one another for company”.

This would have been especially true when their parents travelled or spent long hours at royal events.

Charles was even pictured helping his sister walk down the steps to greet the Queen and Prince Philip as they arrived back from a royal visit to Malta in 1954.

Anne reportedly knew how to stand up for herself from a young age and even got into a brawl with her older brother when it was called for.

Mabel Anderson, a former royal nanny, said that Charles was “never as boisterous or noisy as Princess Anne” who by far had the “much stronger, more extrovert personality”.

She asserted that from an early age, Charles “seemed weighed down” with the understanding of his future as the king of Great Britain.

Anne, however, was far more “playful” and oftentimes broke the rules.

“It cannot have helped either that Anne was physically more robust than her brother,” royal biographer Nicholas Courtney has previously said.

He continued: “There are quarrels in every family, Princess Anne even admitting in retrospect that she and her brother ‘fought like cats and dogs.'”

Princess Anne and Prince Charles certainly had different childhoods and expectations, as one was the direct heir to the British throne, and the other was a young girl in the 1950s.

Anne was one of the first women to experience an education outside of the palace, as her mother and aunt, Princess Margaret, were both educated at home.

Prince Charles still manages to behave like a goofy big brother to Princess Anne, with a video clip showing Charles creeping up on his younger sister and startling her in 2018.

In the clip, Anne turned around and grinned at Charles, which was quite a rare thing to see from the otherwise stoic princess.

Royal correspondent Charlie Proctor posted the video on Twitter, and some people took to the comments to express how lovely and normal the exchange was between the siblings.

“Something only a big brother can do and live to tell about it,” one person wrote, while another said: “It is heartwarming to see their playfulness.”

The Princess Royal will most likely be spending her birthday in Balmoral with her husband Vice Admiral Sir Timothy Laurence, while they are visiting the Queen in her Scottish residence.