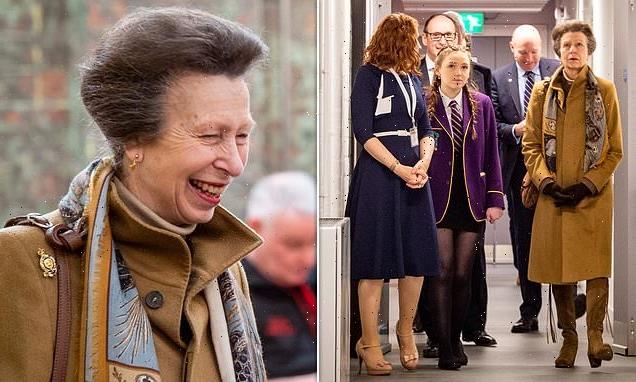 Living up to her reputation! ‘Hardest working royal’ Anne opens the newly refurbished poppy factory in Edinburgh after a busy week of engagements

The Princess Royal, 72, arrived at the poppy making campus on Thursday morning to officially re-open the facility after its two-year refurbishment.

The late monarch’s daughter looked sharp in her tan coat, which ended just below the knee, revealing suede over-the-knee boots in a similar shade.

The mother-of-two completed her outfit with a silk tan and light blue patterned neck scarf and brown leather gloves. 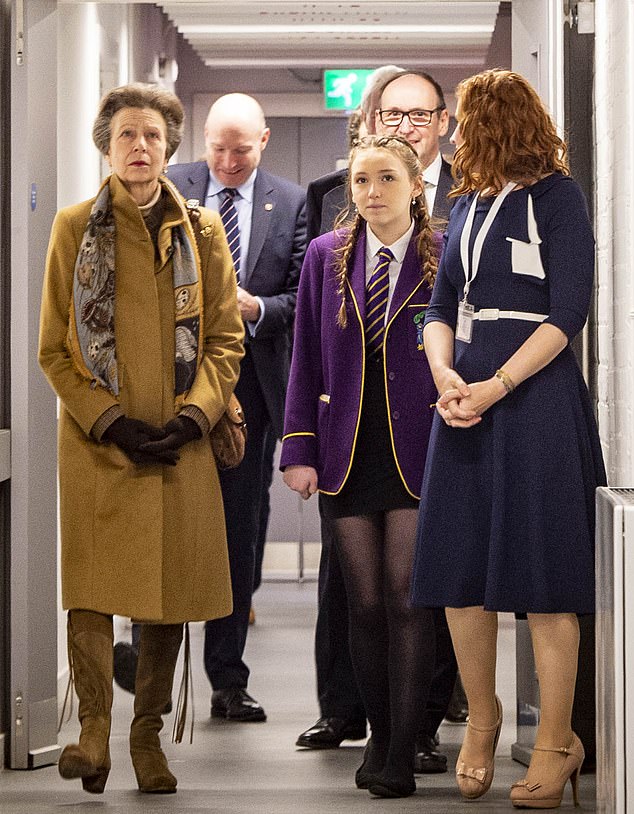 In Edinburgh the Princess Royal (left) opened the Lady Haig Poppy Factory, and met with veteran workers and competition winners

She carried a brown shoulder bag as she  toured the factory and its new exhibition space while engaging with staff, before later visiting Poppyscotland’s mobile museum, Bud.

The Lady Haig Poppy Factory, which was founded in 1926 will now welcome back visitors and school groups following the project to showcase the poppy’s history and heritage.

Thirty-three disabled veterans work in the factory on Logie Green Road, making more than three million poppies each year for the Scottish Poppy Appeal, as well as wreaths and other tributes. 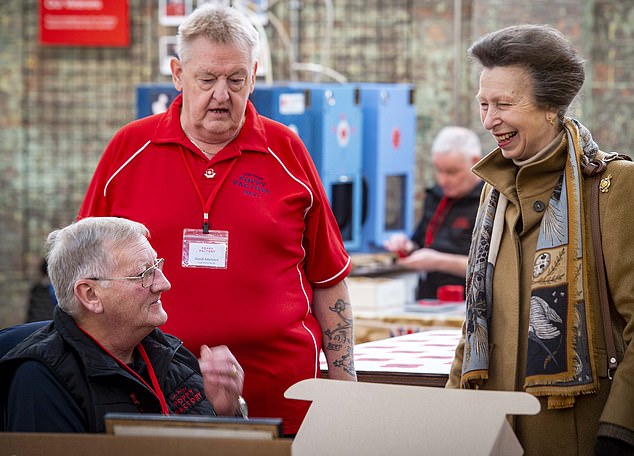 During her visit, the Princess Royal spent time talking to the veterans about their experiences and the different stages of making poppies and wreaths.

She signed a ‘reflection postcard,’ which will form part of a wall display in the factory.

The 72-year-old also met Summer Saunders and Kate Miller, both 17, from Ayr, who designed a silk red poppy dress as part of the ‘Junk Kouture’ sustainability project and Sophie Henderson, 14, from Ayrshire, who won Poppyscotland’s 2020 poetry competition with her poem ‘In Future Fields.’

Princess Anne then toured Bud, the 18-tonne truck which transforms into a micro-museum, that has now travelled to every local authority in Scotland. 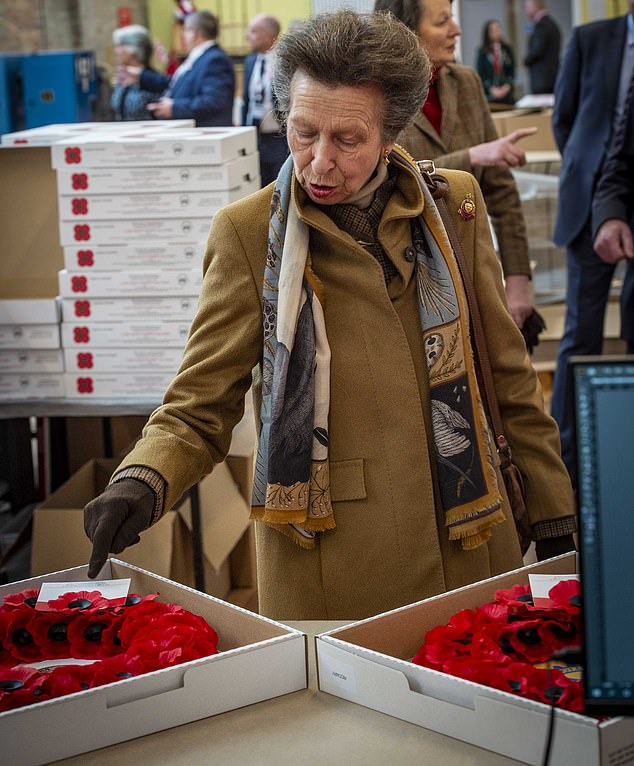 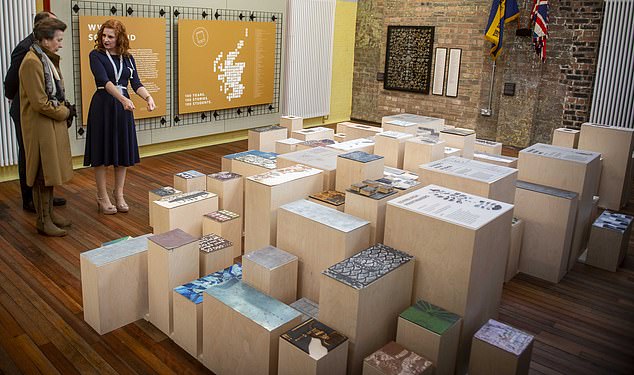 The late monarch’s daughter looked sharp in her tan coat, which ended just below the knee, revealing suede over-the-knee boots in a similar shade. She is pictured here taking a tour of the newly refurbished factory

She unveiled a plaque before being presented with a framed copy of both poems by Ms Owen.

Poppyscotland’s Director, Austin Hardie, said: ‘We were honoured to welcome Her Royal Highness The Princess Royal to officially re-open our newly refurbished factory and campus today.

‘This is the culmination of two years of hard work to ensure we have a modern facility dedicated to supporting Scotland’s veterans’ community.

‘We are very proud of our heritage, and this marks an exciting new chapter in the factory’s 97-year history. 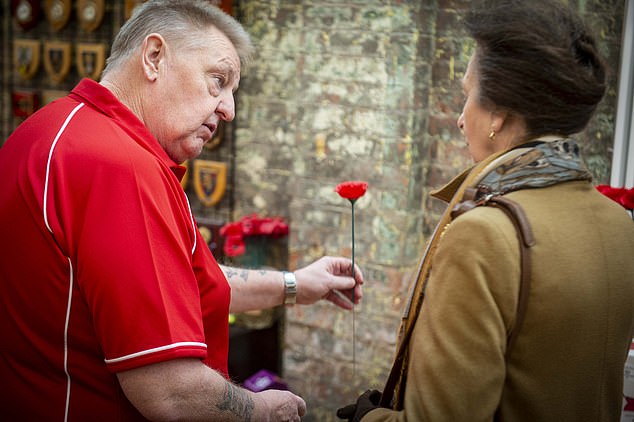 ‘We are looking forward to welcoming school groups and the wider public to the factory and exhibition space, telling the story of the poppy to new generations.’

Ms Owen added: ‘We are very grateful to Her Royal Highness for taking the time to meet the team involved in this exciting project, as well as her continued support for our Armed Forces community.

‘The veterans enjoyed showing her how poppies and wreaths are hand-made using traditional methods, and explaining the unique history of the factory.’

Yesterday, on Wednesday, the 72-year-old was today handing out investitures at the Palace of Holyroodhouse- including honours for Team GB’s curling team – after flying back from Athens, where she attended the funeral of King Constantine of Greece. 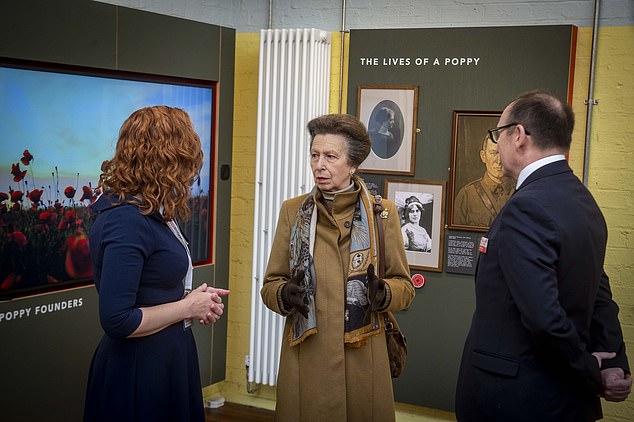 Dressed in full military uniform, the royal looked on sparkling form as she welcomed the latest people to be honoured to at the King’s official residence in Edinburgh.

The Team GB squad won gold at the 2022 Winter Olympics in Beijing and were skippered by Eve Muirhead OBE – who announced her retirement from curling last year.

They joined European royals – such as Queen Letizia of Spain, King Willem-Alexander and Queen Maxima of the Netherlands and King Philippe and Queen Mathilde of Belgium – at the Orthodox Metropolitan Cathedral for the public service.

Anne and her husband then attended the private burial ceremony at the former Greek royal summer palace of Tatoi, where the late Queen’s daughter offered her condolences to King Constantine’s sons Pavlos and Prince Nikolaos of Greece.

King Constantine passed away from a stroke on January 10 in the Greek capital at the age of 82 – more than 50 years after he was exiled in a military coup.

Princess Anne appeared stoic as she entered the cathedral in Athens with her husband on Monday morning.