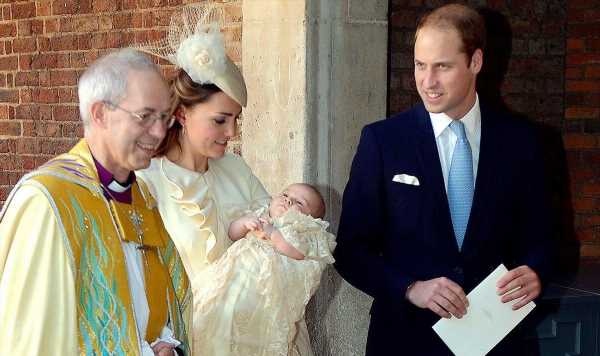 Prince George of Cambridge was born on July 22, 2013, the first child of Prince William and Kate, Duchess of Cambridge. George’s christening took place a few months later at the historic Chapel Royal at St James’s Palace, a venue used for several royal christenings over the years and the marriage ceremony of Queen Victoria to Prince Albert in 1840.

For his christening, Prince George took part in many of the usual royal traditions.

He was christened in the Lily Font which was designed on the orders of Victoria and Albert for the christening of their first child, Princess Victoria.

In the decades since, the Lily Font has been used for every royal christening.

Water from the River Jordan was also used during Prince George’s christening in line with royal tradition.

After the ceremony, a unique royal tradition involving Kate and William’s wedding cake was adhered to at Clarence House.

Buckingham Palace said in a statement at the time: “Following the service, The Prince of Wales and The Duchess of Cornwall will give a private tea in Clarence House.

“Guests will be served slices of christening cake, which is a tier taken from The Duke and Duchess of Cambridge’s wedding cake.”

But one tradition Prince William got to experience at his christening that his son didn’t was the wearing of the royal christening gown.

But due to its delicate Honiton lace, it was deemed too delicate to use again after the christening of the Queen’s granddaughter Lady Louise Windsor in 2004.

The late Queen’s trusted dressmaker Angela Kelly crafted a replica of the gown to be used at the christening of her eighth grandchild, James, Viscount Severn, in 2007.

Prince George and his two siblings Princess Charlotte and Prince Louis were subsequently christened in the replica gown too.

The gown was likely last used earlier this year for the christening of the Queen’s great-grandchild Sienna Elizabeth Mapelli Mozzi.

Attendees at Prince George’s christening included the late Queen and Prince Philip, then Prince Charles, the former Duchess of Cornwall and Prince Harry.

Guests from Kate’s side of the family included her parents Michael and Carole Middleton and her siblings Pippa Middleton and James Middleton.

Royals tend to have several godparents, and a plethora were chosen for George as a future King, including Prince William’s cousin Zara Tindall.

George’s siblings were born in 2015 and 2018 respectively, and while Prince Louis was christened at St James’s Palace, Princess Charlotte was christened at the Church of St Mary Magdalene in Sandringham, Norfolk.