Revealed: Prince Charles has a framed photo of him walking Meghan down the aisle on display at Clarence House in a touching tribute to his daughter-in-law

Prince Charles has a framed photo of him walking Meghan down the aisle on display at his London home, it has been revealed.

The Duke of Cornwall, 70, has the black and white photograph from the royal wedding proudly displayed in the Morning Room of Clarence House.

The image shows Charles smiling at his future daughter-in-law as they made their way towards Prince Harry at the altar of St George’s Chapel, Windsor. 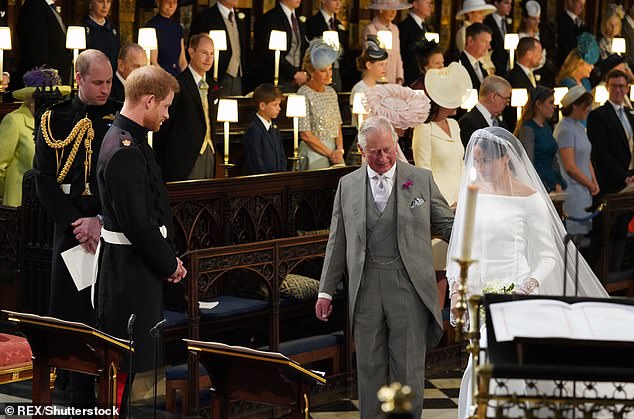 Touching tribute: Prince Charles has a photo of him walking future daughter-in-law Meghan down the aisle on display at Clarence House, it has been revealed

Details of the photo were shared by Daily Mail Royal Correspondent Rebecca English on Twitter after she spotted it during a visit yesterday.

She wrote: ‘At Clarence House today I spotted a framed black and white photograph (in the public area) of the Prince of Wales walking his soon to be daughter-in-law, Meghan Markle, towards the altar at St George’s Chapel.

‘It was very touching – and shows how much the moment meant to him.’

The photo is displayed alongside a formal family portrait from the wedding on a table in the corner of the Morning Room, which is used by Prince Charles and the Duchess of Cornwall receive guests and undertake official engagements. 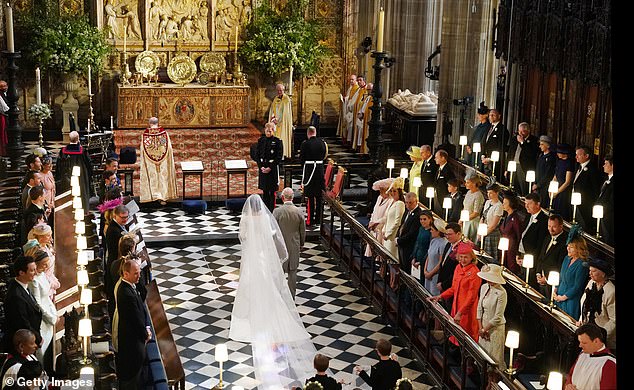 Moving: Prince Charles stepped in to walk Meghan down the aisle after her own father pulled out at the last minute. Pictured, Charles and Meghan approach Harry at the royal wedding

Also on show is a photo of Charles’ beloved grandmother, the late Queen Mother.

Millions of viewers were left deeply moved as they watched Prince Charles accompany Meghan down the aisle after her own father Thomas Markle pulled out at the last minute.

When it became clear that Meghan wouldn’t have her reclusive father to support her, Harry went to his. 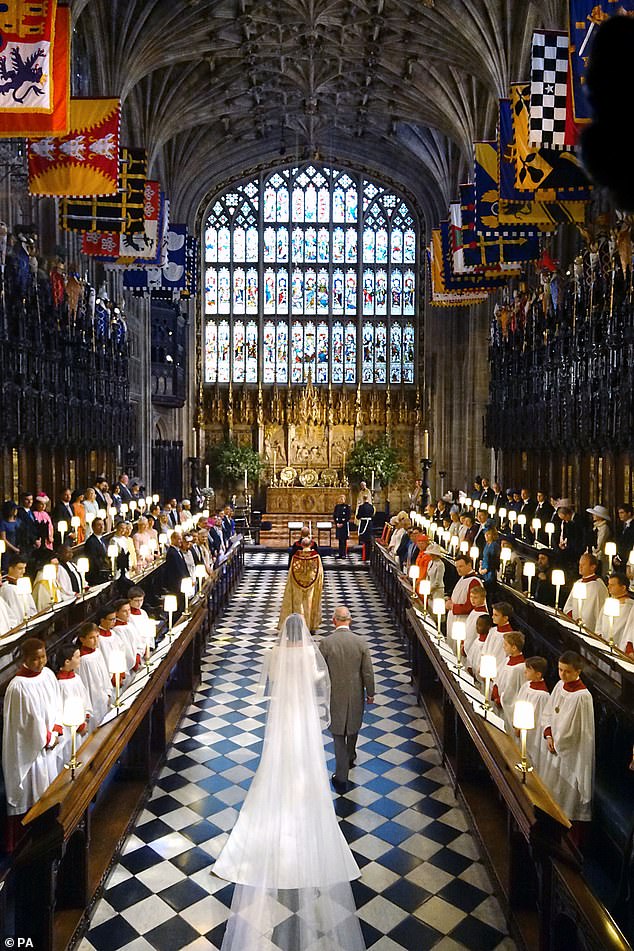 Proud: Charles has the photo of himself and Meghan on display alongside a family portrait

Speaking in a documentary to mark Charles’ 70th birthday last month, Harry said: ‘I asked him to and I think he knew it was coming and he immediately said “Yes, of course, I’ll do whatever Meghan needs, and I’m here to support you”.

‘For him that’s a fantastic opportunity to step up and be that support, and you know he’s our father so of course he’s going to be there for us. I was very grateful for him to be able to do that.’

Prince Charles recently opened the doors of Clarence House for a virtual tour, allowing royal fans to explore the public rooms from the comfort of their homes.