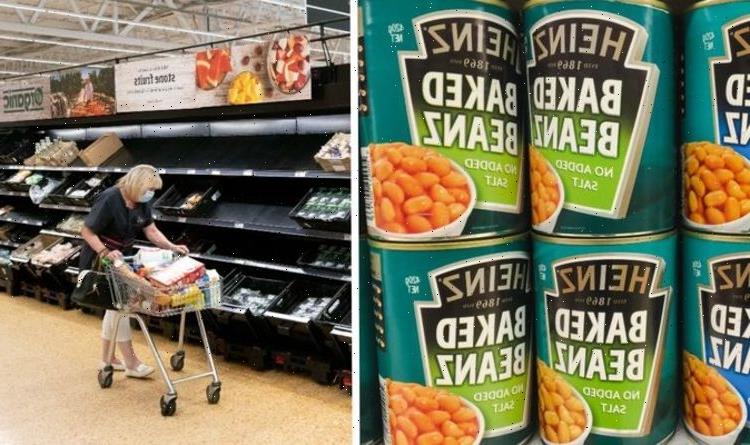 Miguel Patricio has said the company is “raising prices, where necessary, around the world”. This will affect ketchup and baked beans, as well as the products of other companies too.

Speaking to the BBC this week, Mr Patricio said the driver shortages in the UK are partly to blame for the need to hike up prices.

Britain has been struggling with a lack of HGV drivers since the beginning of the pandemic.

Brexit is also one of the root causes as EU citizens who used to work in the UK have returned home.

Due to the shortages, logistics costs have increased.

Mr Patricio said: “Specifically in the UK, with the lack of truck drivers.

“In (the) US, logistic costs also increased substantially, and there’s a shortage of labour in certain areas of the economy.”

The Heinz boss added that shoppers need to get used to paying more for food due to a rising world population and a lack of land to grow produce.

DON’T MISS:
Orchid care: Expert on how to get an orchid to flower again [INSIGHT]
Boris Johnson pledges £58M to build new homes – EXPERT insight [UPDATE]
Britons can buy house in Lake District for less than a London garage [ANALYSIS]

But he also commented that firms should be responsible for trying to prevent the price hikes if possible.

He said: “I think it’s up to us and to the industry and to the other companies to try to minimise these price increases.”

Inflation has also risen “across the board”, unlike in previous years.

This news comes around the same time as Poundstretcher has warned that its prices will rise before Christmas.

CEO Aziz Tayub has said the cost of products are set to rise in the next few weeks.

These include Kellogg’s cereal and Fox’s biscuits, as well as Heinz ketchup and baked beans.

Mr Tayub said: “We have had a lot of negotiations over food and toiletry supplies from the UK over potential price increases in the next few months – brands such as Coca Cola, Kellogg’s, Heinz, Britvic, and Fox’s biscuits.

“I understand there will be increases of three to five percent in the next few months and I think it’s more down to worldwide raw material costs.”

However, Mr Tayub stressed that unlike other retailers, such as some major UK supermarkets, Poundstretcher is not currently dealing with stock shortages.

He said: “We have got no shortage of stock – we have plenty of imported stock and plenty of UK stock, which is enough to fulfill our sales targets right up to next March.

“It’s possible that the supermarkets are suffering as they sell products faster, but if you go into our stores they are full of food and toiletries and Christmas stock.”

This is partly due to the fact that Poundstretcher has a small fleet of lorries compared to other shops.

The company has around 30 trucks, which have been almost unaffected by the lorry driver shortage.