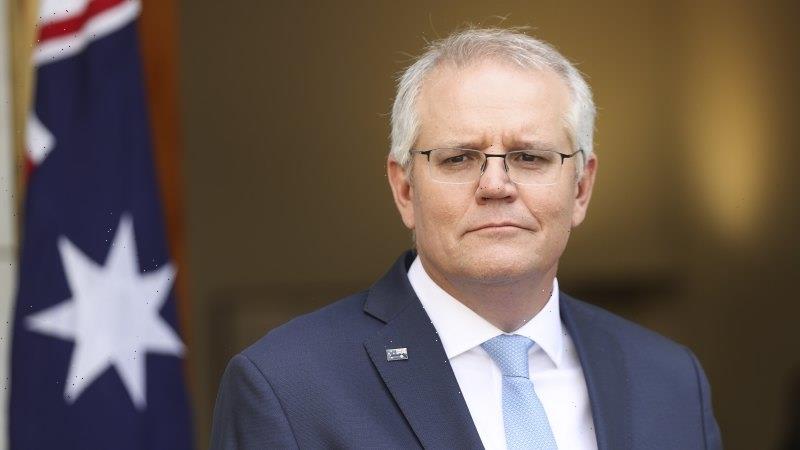 Australians are being promised a “world-class” regime to guarantee safety with a new fleet of nuclear submarines as Prime Minister Scott Morrison prepares for an election fight over a dramatic shift in defence policy.

Mr Morrison said the eight submarines could be built without developing new domestic nuclear reactors and without transporting radioactive fuel to the vessels at their home ports, arguing changes in technology had tackled old concerns.

But the new plan triggered claims from the Greens that “floating Chernobyls” would be docked in Australian cities, while Labor called for safeguards in the shift to a powerful capability the government has previously ruled out.

“This arrangement would witness a further dramatic loss of Australian sovereignty, as materiel dependency on the United States robbed Australia of any freedom or choice in any engagement Australia may deem appropriate,” Mr Keating said.

“If the United States military with all its might could not beat a bunch of Taliban rebels with AK47 rifles in pickup trucks, what chance would it have in a full-blown war against China, not only the biggest state in the world but the commander and occupant of the largest land mass in Asia?” 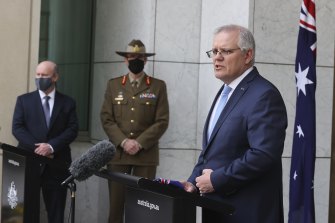 Prime Minister Scott Morrison, with Secretary of the Department of Defence Greg Moriarty and Chief of the Defence Force General Angus Campbell, said Australia’s “relationship with the United States is a forever relationship”.Credit:Alex Ellinghausen

Mr Morrison said the decision put him in the company of former prime ministers John Curtin and Robert Menzies, who formed and cemented the US alliance.

“It is a relationship that has served our peace and security interests for a very, very long time and will forever into the future,” he said.

While Labor leader Anthony Albanese attacked the government over the $2.4 billion spent on the dumped plan for conventional submarines, he did not endorse Mr Keating’s criticism and instead backed the stronger ties with the US.

With the Chinese government calling the Australian decision “extremely irresponsible” because it would increase instability in the region, Greens leader Adam Bandt prepared for an election campaign on nuclear power and the US alliance by saying the government should ease rather than exacerbate tensions.

“The Prime Minister is putting floating Chernobyls near people in Brisbane, Adelaide, Sydney and Perth, and he needs to explain how many people will die if there’s a nuclear accident in one of our major cities,” he said.

In a series of assurances aimed at calming concerns over the change in policy, Mr Morrison said the sudden cancellation of the $90 billion attack-class submarine deal would only lead to greater spending and stronger job creation in building the new fleet.

The government has not set a percentage on the amount of local construction with each of the submarines and will consider whether the first vessels could be built overseas in order to deploy some of the fleet as soon as possible in the 2030s.

Those decisions will be part of a consultation phase over the next 18 months with the US and United Kingdom under the new military alliance, although the fundamental decision is to make the bulk of the fleet in South Australia.

With US company General Dynamics reporting a $40 billion backlog in work at its Electric Boat division, which makes the Virginia-class nuclear submarines, options to fast-track overseas construction could be limited.

A central claim in the government plan is Australia will gain access to US and UK technology including nuclear reactors made overseas and fitted to the submarines with enough fuel to last for the life of the vessel, limiting the handling of the fuel in Australia.

“We have built a world-class nuclear safety and regulatory capability, and we possess decades of experience of safely operating and sustaining submarines in addition,” Mr Morrison said on Thursday.

“This is not about acquiring nuclear weapons. Australia has no interest in that. No plans for it, no policy for it, no contemplation of it. It’s not on our agenda.”

Defence Secretary Greg Moriarty said the taskforce to be set up with the US and UK over the next 18 months would develop the “highest standards of safety” for the project including the management and disposal of nuclear waste from the vessels.

Western Australian Premier Mark McGowan lashed out at the decision to build the new fleet in South Australia and drop plans for maintenance in Perth, saying this let down WA.

“Today’s decision by the Liberals and Nationals is not a decision in the national interest,” he said.

Mr Morrison argued that “Western Australians are Australians” and the project was in the national interest.