The platypus should be recognised as nationally threatened as its range has shrunk by about a quarter, or almost the size of Victoria, since 1990, leading to fears climate change will continue to exacerbate the once-common animal's population.

The egg-laying monotremes are in retreat across much of the rivers and creeks of eastern Australia, as threats led by worsening droughts and dam-building push the animal to a vulnerable status, a study to be released by University of NSW researchers on Monday argues. 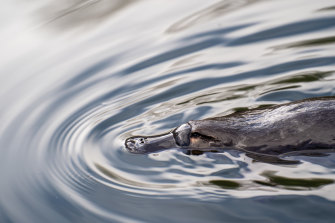 Observations indicate that the range of marsupials has declined by more than 22 per cent, or almost a quarter, in just the last three generations of the animal. Credit:Pete Walsh, via ACF

The study, commissioned by the Australian Conservation Foundation and other environmental groups, found observations of platypuses fell the most in NSW, with a drop of 32 per cent in three decades. Queensland's rate was down 27 per cent.

While Victoria notched a smaller decline at 7 per cent, some catchments around Melbourne saw numbers dive almost two-thirds. The state's scientific advisory committee earlier this month recognised platypuses as "vulnerable", a status shift the UNSW researchers say should be matched nationally.

"It's an ongoing decline," Tahneal Hawke, a platypus researcher at UNSW and one of the report's authors, said. "We have a really good opportunity to intervene now before it's too late."

While sharing koalas' global standing as an emblematic Australian animal at risk, platypuses get much less attention in part because they are nocturnal and elusive, making them harder to trap and track in the wild.

Newspaper reports of a century of hunters shooting as many as 20 a day for their pelts were one indication they were once much more plentiful in our waterways.

"There's no way you would expect to see maybe one individual today, let alone 20," Dr Hawke said, adding the animal's numbers can be "a first indicator if a river's in trouble" as they survive on shrimp, yabbies and other invertebrates that are critical links in aquatic food chains. 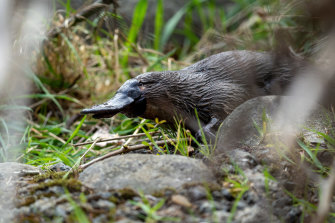 Vitctoria is moving to recognise platypuses as vulnerable and other regions may do so too.Credit:Pete Walsh via ACF

The report is not yet peer-reviewed but its sponsors, which include WWF-Australia and Humane Society International, plan to use it to prompt NSW and the Morrison governments to examine the plight of platypuses, particularly after years of severe drought and last summer's bushfires.

A spokesman for federal Environment Minister Sussan Ley said the government had invested about $1 million to support the platypus and its ecosystems as part of a $200 million Bushfire Wildlife and Habitat recovery package.

"The Threatened Species nomination will be considered as part of the interim nomination and prioritisation processes set up by the minister earlier this year," the spokesman said, adding the move allowed for accelerated status changes once researchers collect "sufficient information on the impacts of the bushfires".

A spokeswoman for the NSW Department of Planning said the government had recently spent $8.8 million on a platypus centre at Taronga Western Plains Zoo and was working with partners to support their populations, including by using environmental water releases.

Richard Kingsford, a lead author of the report and the director of UNSW'S Centre for Ecosystem Science, said the threats were many, including over-extraction of water, dammed rivers, pollution, invasion wildlife including foxes, and additional sediment run-off because of land clearing.

"The platypus is bearing the brunt of all those things that we are doing to our river systems," Professor Kingsford said.

Even the flows from reservoirs can be problematic. Often released in summer out of sync with natural timing, such flows are typically cooler than average and disrupt aquatic life. They can also drown baby platypuses –known as puggles – just as they emerge from their burrows in January or February, he said. 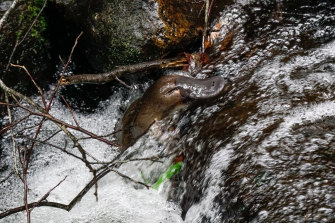 Platypuses are also affected by unseasonal water releases from reservoirs. Not only is the water often cooler than would be natural, high flows in January and February can wash away puggles just as they emerge.Credit:Pete Walsh via ACF

“We have a national and international responsibility to look after this unique animal and the signs are not good” Professor Kingsford said. "Platypus are declining and we need to do something about threats to the species before it is too late."