Industry figures warn the Andrews government's plans to reopen the battered economy are too complex, and are calling for a clear framework to ease coronavirus restrictions.

The government is preparing to announce a plan on Sunday to steer Victoria out of the coronavirus second surge, with ministers and public servants meeting business and industry groups this week to thrash out a recovery plan. 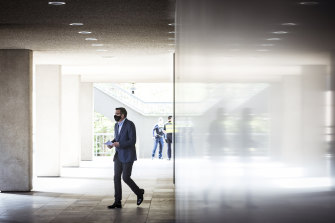 Premier Daniel Andrews is preparing to unveil his plan to take Victoria out of the second surge.Credit:Chris Hopkins

Premier Daniel Andrews this week revealed businesses would need to overhaul their safety procedures to earn a "green light" to operate under a new traffic-light alert system.

"It's really important for business and the broader community that we don't have a complicated matrix or traffic-light system that's difficult to follow and leads to grey areas and [the] uncertainty we had a few weeks back with businesses not knowing confidently whether they were able to operate or not," Ms Aldred said.

Meanwhile, Victoria's state of disaster, which was due to expire on Wednesday, has been extended for at least 11 days. Mr Andrews said it needed to be extended until the scheduled September 13 end date of Melbourne's stage four lockdown.

The state of disaster declaration allows the government to enforce Melbourne's curfew and the ban on residents travelling more than five kilometres from their homes.

The government also secured a narrow win on its bill designed to extend state of emergency powers by a further six months, with a 20-19 vote following a marathon debate in the upper house that ended just after 2am on Wednesday. The legislation will be debated on Thursday in the lower house, where the government has a majority.

Mr Andrews said the powers would allow the Chief Health Officer's directions – such as the forced quarantine of returned travellers or coronavirus patients – to be legally enforced.

Suburbs in Melbourne's west, north and outer south-east continue to be hotspots for COVID-19 and transmission is mainly occurring in aged care homes, healthcare settings and workplaces, Professor Sutton said.

The Coalition wants students to return to face-to-face learning next term; the 8pm curfew lifted "as soon as possible"; resumption of community and junior sport; harmonising restrictions for cross-border communities; allowing for faster easing of restrictions in areas with low or no cases; easing restrictions on weddings, funerals and religious services; and allowing the resumption of non-contact personal services.

Our weekly newsletter will deliver expert analysis of the race to the White House from our US correspondent Matthew Knott. Coming soon. Sign up now for The Sydney Morning Herald‘s newsletter here, The Age‘s here, Brisbane Times‘ here and WAtoday‘s here.