Woman who spends $1,000 a year on treats for her 252lb PIG throws him a lavish birthday party with $690 Gucci glasses and a custom-made coat – after risking her life to stay with him during the California wildfires

A woman has revealed how she treated her 252lb pig to a lavish birthday party to celebrate him surviving California’s deadliest wildfires.

Marcela Iglesias, threw a fifth birthday party for her 18 stone pig, Chuy, just months after he survived California’s deadliest wildfires last month after being trapped in the family home because he was too heavy to leave.

Marcela Iglesias, who is from Agoura Hills, LA went all out for her pet as she treated the him to a huge Italian birthday cake as well as extravagant gifts, including a custom-made coat and $690 (£546) Crystal-Embellished Gucci glasses for his special day.

Snaps of the lavish party have received a lot of attention and have since gone viral with over 11,000 views on social media.

However, the luxury treats are quite the norm for Chuy as talent manager and producer Marcela has admitted spending at least $1,000 (£800) a year pampering the pig and splashing out on fancy clothing, sunglasses and more accessories for her family member. 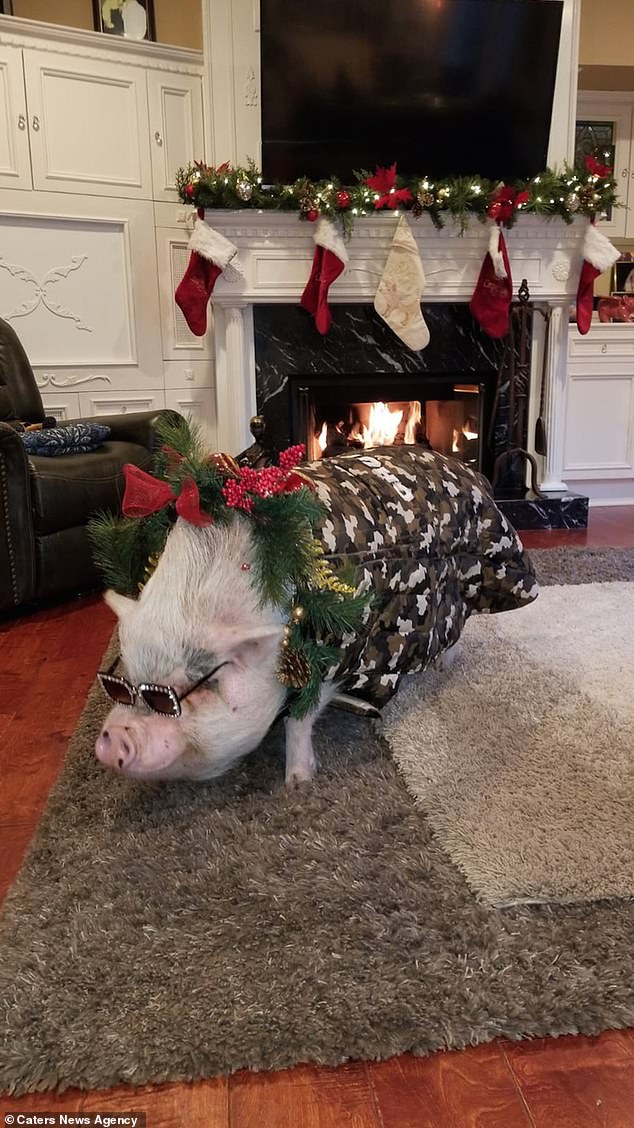 Chuy the pig from LA received a camouflage coat and Gucci sunglasses for his fifth birthday and pictures of the celebrations have racked up more than 11,000 views on social media – although some felt it was wrong to throw such a lavish party for a pet 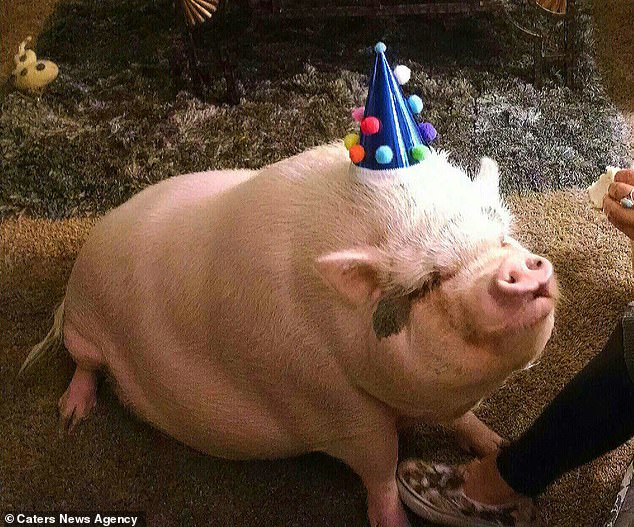 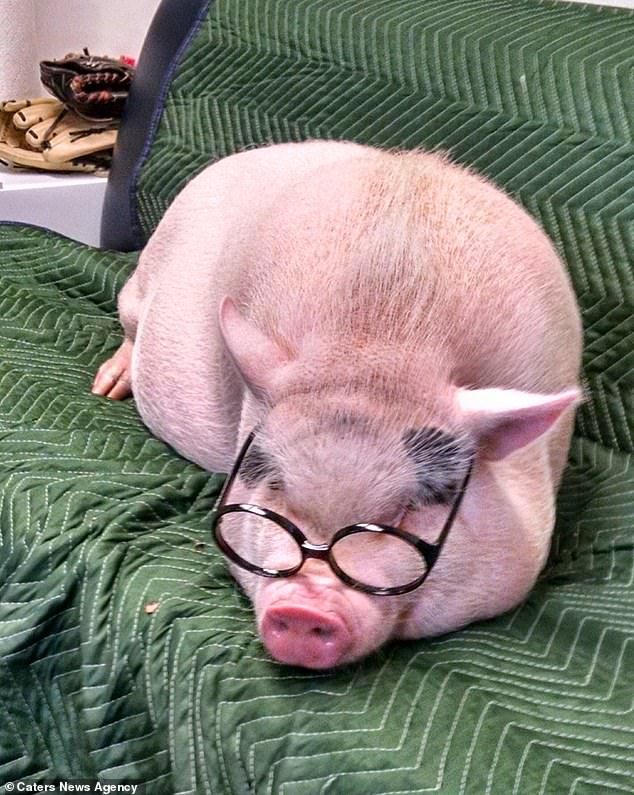 All partied out! The owner often treats her pet to fancy gifts, including beauty treatments and clothes but sometimes all a pampered pet wants is a well-earned rest 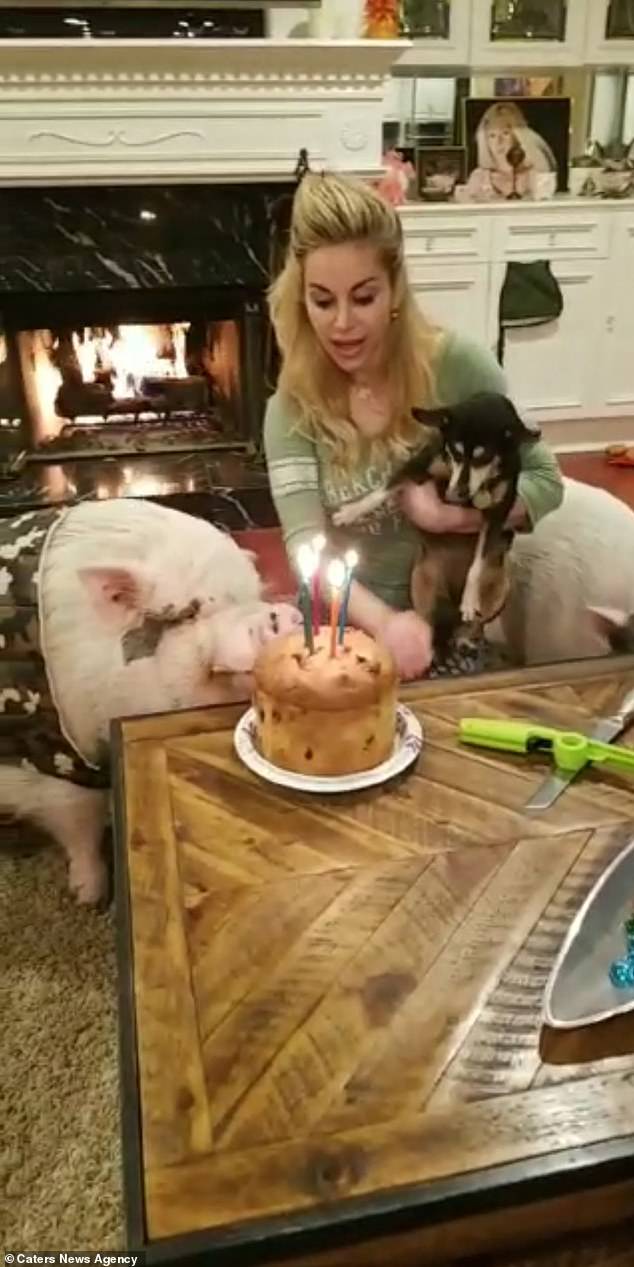 Marcela bought Chuy at a farm sale five years ago, as she believed he was a ‘mini-pig’ and would only weigh a maximum of 49lbs – despite being the biggest of the litter.

But the beliefs turned out to be porkies, when the potbellied pet quadrupled in size within six months and never stopping growing until now, weighing a whopping 18 stone.

Marcela said: ‘When I saw the litter I started laughing, I saw them all running around like little podgy balls, I needed to get one.

‘I thought I was getting a mini-pig at around 50lbs tops, after seeing his mom and dad I thought that he would be small too. 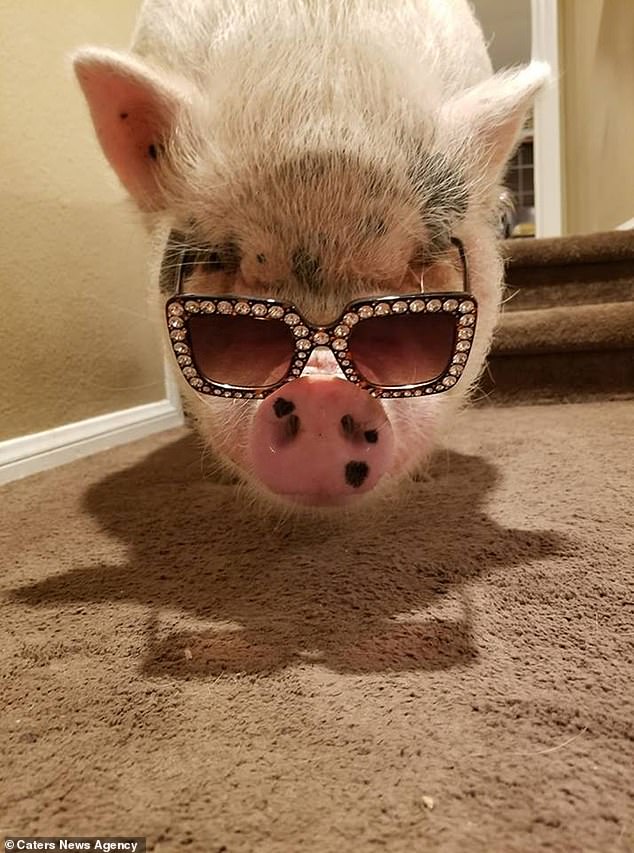 Pampered piggy! Chuy was gifted a pair of $690 (£546) Crystal-Embellished Gucci glasses for his special day and wore them with pride 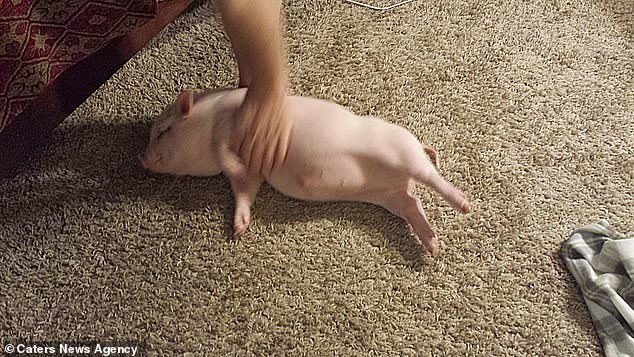 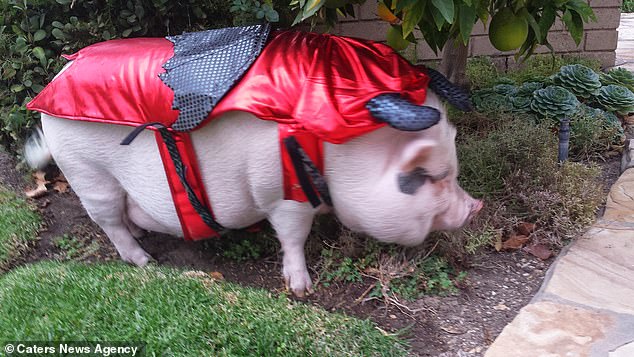 Chuy now weighs 252lb in weight and is too big for Marcela to pick up and carry. She remained at home with him during last month’s wildfires as he was too heavy to move

‘But by six months he had quadrupled in size, he kept growing, I don’t know if it was because I overfed him at first.

‘I was in denial that he would get that big, everyone thought at six months that he would stop growing, but he only stopped at three years old.

‘Despite this fact that he kept getting bigger, I never thought of abandoning him or taking him to a shelter.’ 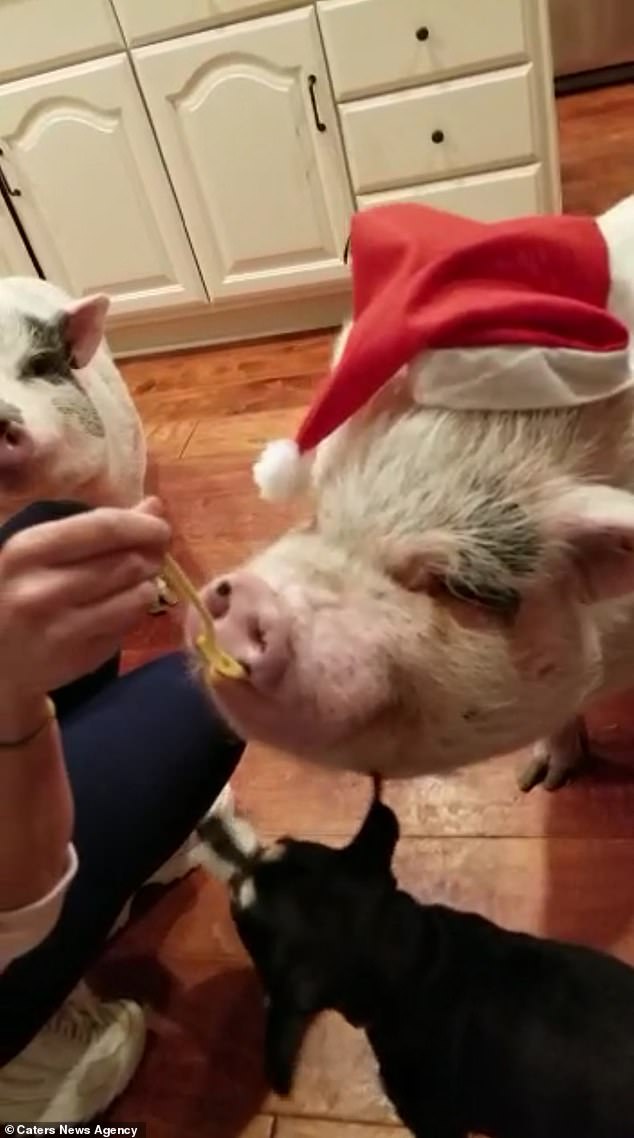 The mother feared she was the cause of Chuy’s weight gain because she ‘overfed’ him. He is now four times bigger than the size he was supposed to grow to, but she has never considered rehoming him

Marcela’s pig preferred the edible treat to his designer gifts on his birthday, which he celebrated last month after surviving California’s deadliest widlfires

It was feared Chuy would perish as he refused to leave the home during the California wildfire last month, which killed 86 people and destroyed more than 18,000 structures.

Unable to leave their piggy pal behind the family-of-four stayed watching the flames draw ever closer to their home, getting within 200 metres.

After Chuy survived the deadly blaze, Marcela thought it was more than necessary to celebrate Chuy’s birthday in the best way possible.

Marcela continued: ‘We were especially happy to celebrate his birthday as my house was almost burned down in the wildfires. 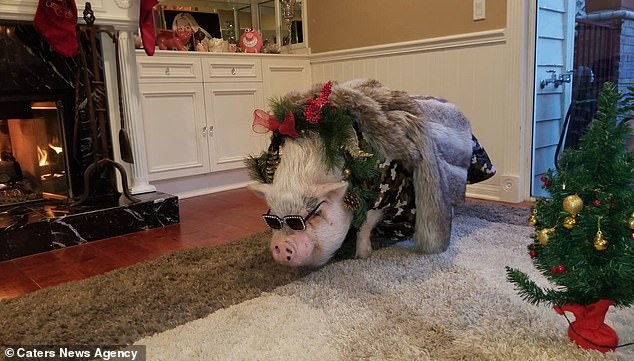 Marcela had no qualms about throwing a birthday party for Chuy especially after the horrific ordeal their family endured, and the pampered pig has also been enjoying Christmas celebrations too

‘When fire came closer to the back of my house, we put our two smaller pigs in the car, but it was too hard to lift Chuy.

‘We tried to push him but he’s so heavy and when he doesn’t want to be picked up we can’t do it, he makes it’s even harder by constantly trying to run away.

‘When firemen came and saw the size of him, they told us they couldn’t help, so I didn’t leave my home.

‘I couldn’t bear to leave him alone in the house but he was too big to carry and we didn’t have a trailer.

‘My son’s school was on fire only a block and half away from my house, we were very lucky. 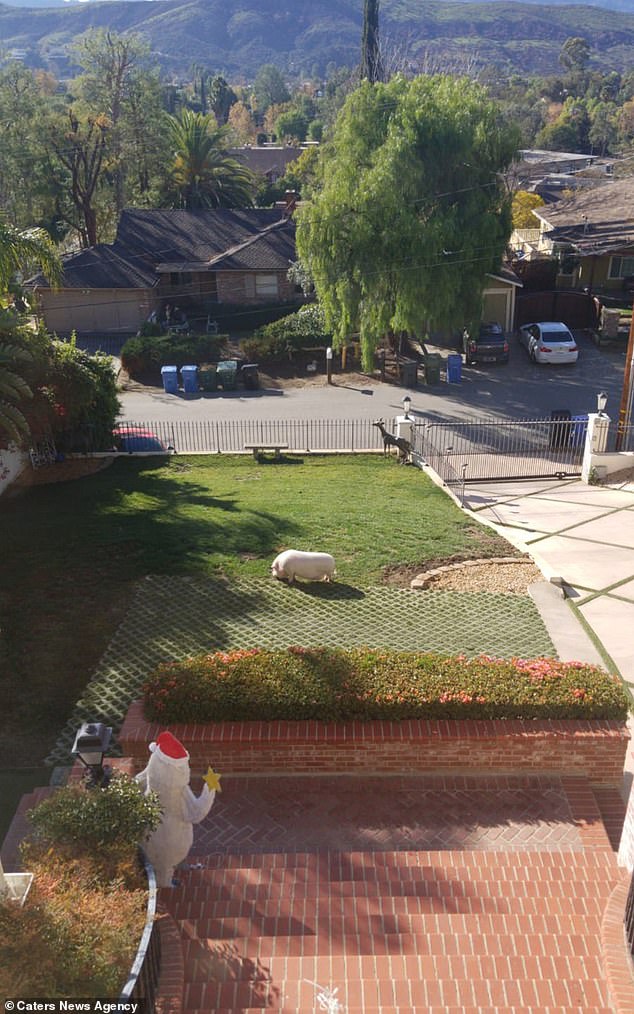 Marcela feared her house would burn down when California was hit by deadly wild fires earlier this year, but insisted remaining at home because Chuy was too heavy to move

‘So it was an even nicer birthday to celebrate being safe and alive, a lot of people lost animals who were left behind.

‘For Chuy’s birthday this year we had a little celebration with an Italian cake which had five candles on we sat around and sang happy birthday to him.’

Marcela made sure her other pets were not left out on Chuy’s birthday, as her dogs and other pets all got a slice of cake too.

She continued: ‘Then all the pets shared pieces of the cake, of course Chuy had more than the others, he seemed very happy being the centre of attention.

‘Even though I spent more money on his custom-made jacket and glasses, of course he was more interested in the cake that cost seven dollars.’ 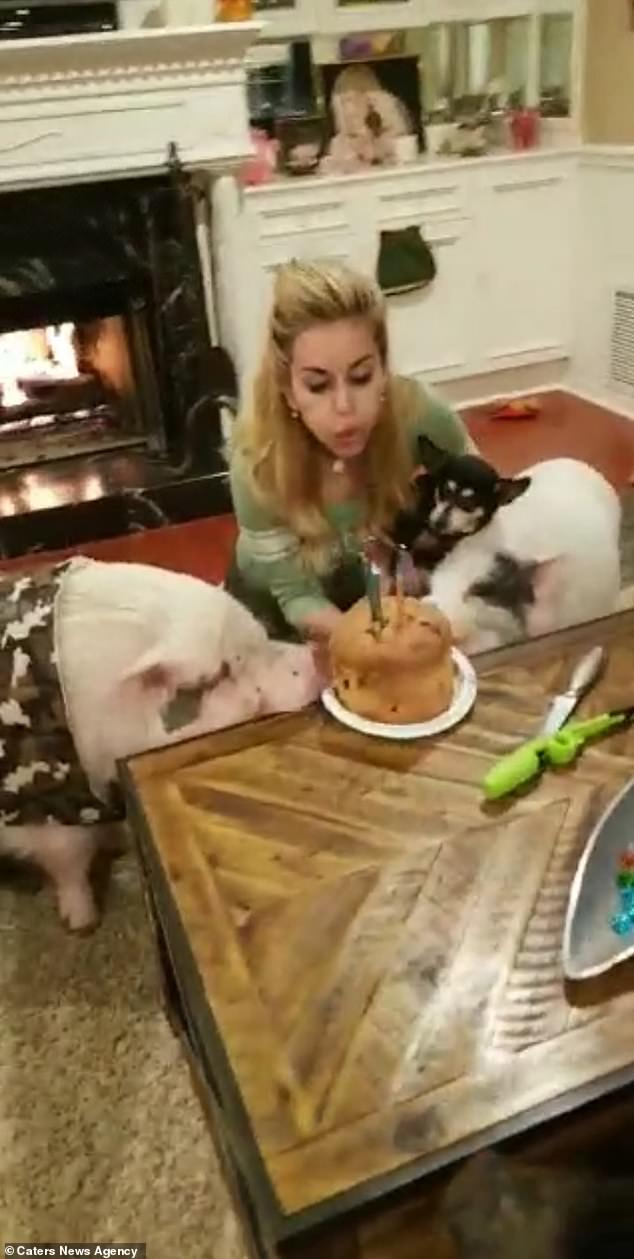 Chuy needed a little help blowing out the candles on his birthday cake, which his doting mother was only too happy to provide

Since the video was posted last month, some social media users felt the pig’s treatment was over the top, although Marcela disagrees.

Marcela said: ‘For me my pigs are family, they are like my dogs or bunnies, we are all equal and the same, a lot of people are not used to seeing that behaviour.

‘They don’t understand that pigs can be better behaved than dogs, they are very smarty and we only see them in a certain way because of society’s teachings.

‘We had a lot of positive comments and really I don’t care about the haters, I love the haters. In my mind, if you don’t like it don’t look.

‘People are shocked by how well I treat my animals, but there are pampered pets everywhere.’

Marcela became obsessed with pigs during her time living in Argentina and finally decided to adopt one in 2013.

The parent has only grown fonder and fonder of her four-legged friend as he has helped her to deal with her anxiety.

Marcela hopes sharing Chuy’s adventures online will help to encourage people to build more of a connection with animals typically on appreciate as meat.

After adopting him five-years-ago, she became vegetarian believing that if you consume animals you can’t claim to love them. 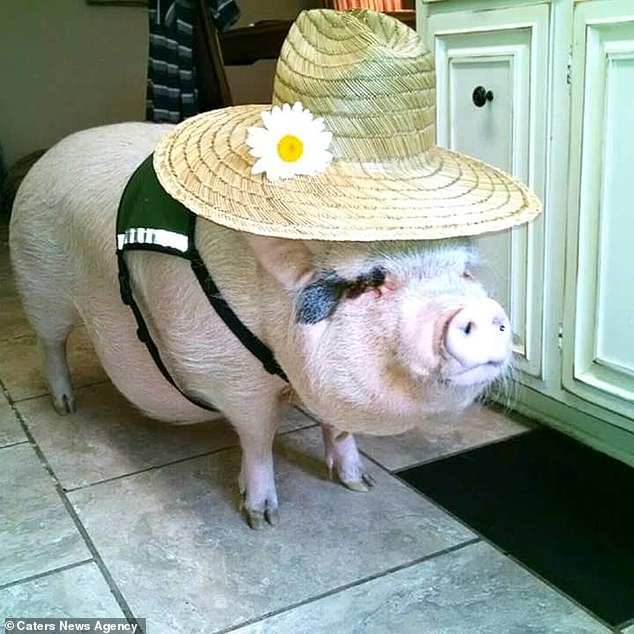 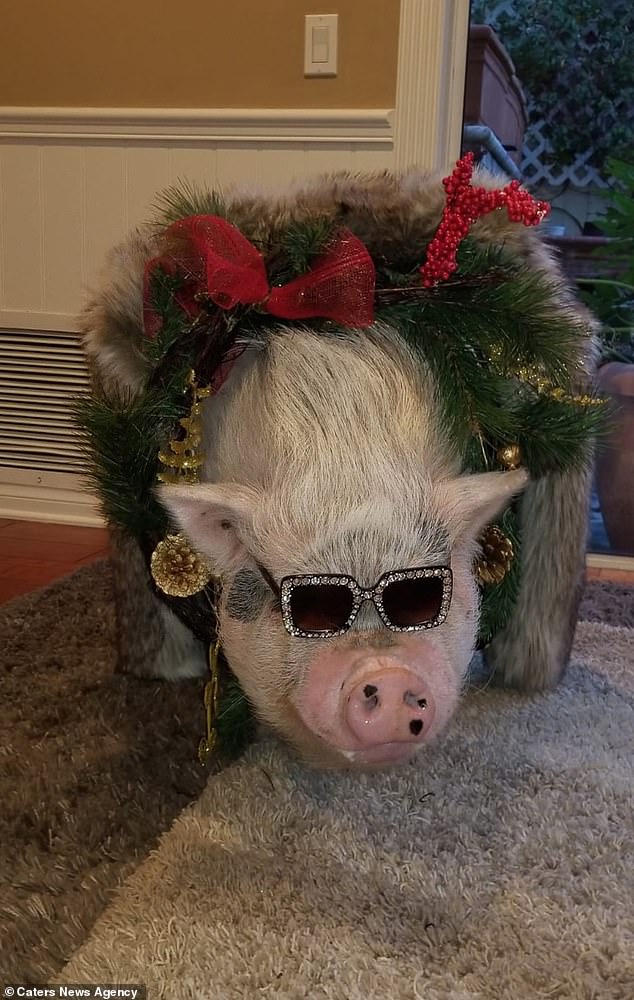 Marcela said: ‘Pigs have a nervous system and so they feel pain, if you love animals and care for them the pig is an animal.

‘If I can change on person’s mind about eating meat or consuming less than I have achieved a lot, the way animals are treated in the meat industry is disgusting.’

Marcela collaborated with The Little Angels Project – a non-profit that help animals in need, from providing surgical procedures and medical treatment to finding new homes for animals in need.

She believes there are a lot of misconceptions surrounding pigs’ cleanliness and their intelligence.

To find more about the non-profit, visit: www.littleangelsproject.org, or to follow Chuy, the emotional support animal, visit: www.facebook.com/CHUYTHEMINIPIG.