On a recent Friday, eight strangers met for dinner at Loluk Bistro in Surry Hills. A veteran and her friend came together; another duo – one working in IT, one in sales – recognised each other from a previous event. Wine flowed and dishes circled the table. Conversation traversed world crises; religion in one's childhood; and if the new Queer Eye was a quality Netflix experience.

It was the fourth such dinner Sanyu Mugambwa, a senior international advisor at a Sydney university, attended. Organised by start-up SocialTable, the dinners are a way for strangers seeking connection to meet and – potentially – leave as friends. 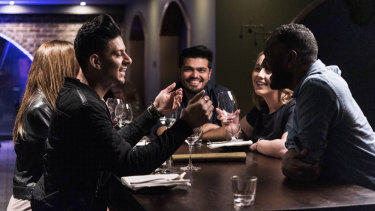 Strangers meet for a SocialTable dinner at Platform 818 in Sydney in May.Credit:Christopher Pearce

“You show up and get past that messy, ‘Do you want to be my friend?’ thing and just chat,” Ms Mugambwa says. “The people I have connected with are in a similar situation: I tend to assume that everyone who comes is interested in the program because it offers a way to meet new people, which is not an easy thing to do in Sydney.”

Despite an abundance of "social" mediums, one in four Australians feel lonely, according to a 2018 study by the Australian Psychological Society and Swinburne University. A quarter of respondents said they “do not feel they have a lot in common with the people around them”. Nearly 55% said they lack companionship “at least sometimes”.

“It is important people take active steps to connect. It can benefit their wellbeing,” she says. “Perhaps it is to focus on working on a relationship they already hold. Or to make an acquaintance into a friend.”

Jennifer Douglas, a couples and families therapist with Relationships NSW, recommends at least “three face-to-face interactions with other people a week to not feel isolated or lonely”.

“The notion of mateship has always been held up as a highly-valued quality [in Australia] … but I suspect that we have fallen victim to the same elements any other modern Western society has," she says.

Ben Stokes' struggle to find his tribe – after working across Australia, the US and the UK – led him to create SocialTable, which hosts 10-15 dinners of 8-10 diners per month. What began with an impromptu dinner in Sydney in January 2018 has since expanded to Melbourne, Brisbane, Perth, Adelaide, San Francisco and New York. 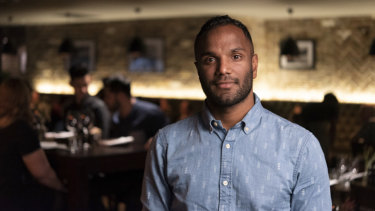 Ben Stokes, the founder of SocialTable, a start-up designed to bring people together and combat social isolation.Credit:Christopher Pearce

“People don’t know how to do anything about it. They don’t realise they have options,” the 34-year-old says. “My mission is that if you don’t want to eat dinner alone, you shouldn’t have to.”

A seat at the table costs between $35 and $165. The oldest attendee to date was a 75-year-old male retiree and the youngest was a 20-year-old female blogger.

Using food as a social springboard is not new. The US-based Table of Plenty and Australia’s The Welcome Dinner Project use meals as a way to bring together disparate communities; A Table For Six uses dinner as the starting point for singles looking for “friendship” (and love) but requires a membership. Dating app Bumble includes a tool – Bumble BFF – for women to make friends.

Carey Furze, the 50-year-old founder of an education start-up, has attended seven dinners. Like Ms Mugambwa and Mr Stokes, she has lived across the world, including in New Zealand, Japan, China and the USA.

“It’s really difficult to meet people socially for friendship outside of work and family, or your peer or uni group,” she says. “Opportunities like this are fantastic."

“Cinema is one of the few places where it’s perfectly okay to go to by yourself,” says Lisa Kitching, SFF’s industry and guests manager. “I thought there would be a lot of like-minded people who might like to share a meal and talk about [the films].”

It starts with showing up.

"It takes courage," says Mr Stokes. "If you know that everyone else at the table is in the same situation, you lose that fear."