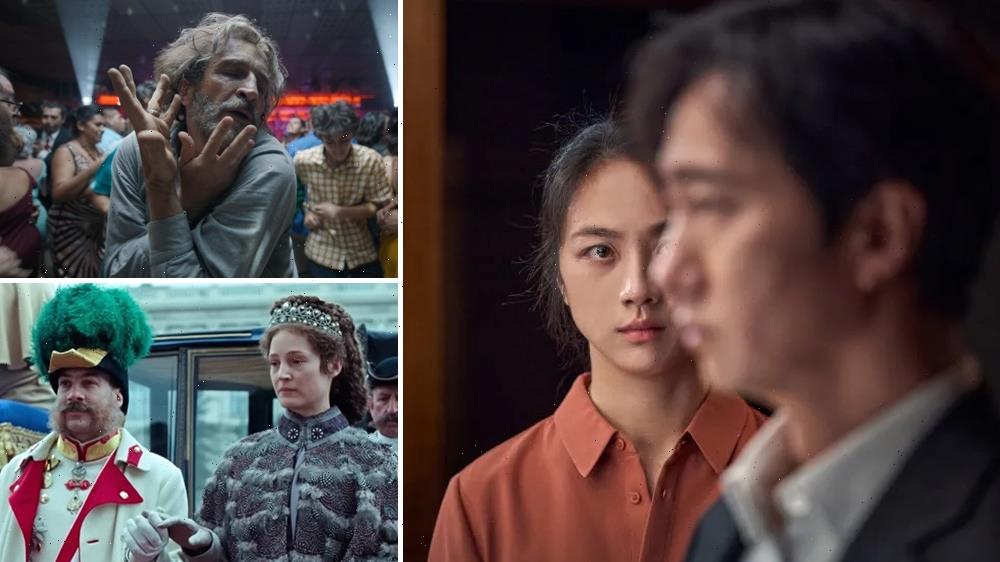 The deadline to submit films in the international feature Oscar category was Oct. 3, but the Academy has not yet announced the full list of accepted titles, so it is a provisional report. AMPAS will release a shortlist of 15 movies on Dec. 21 and the nominations will be announced Jan. 24. The Oscar ceremony will take place March 12 at the Dolby Theatre in Hollywood.

A Cup of Coffee and New Shoes On

LOGLINE: Deaf-mute twins in Tirana discover they have a genetical disease that will take away their sight slowly. They have a decision to make.

LOGLINE: Based on Aurora Madriganian’s bestselling autobiography, the animated film details her escape from genocide as a teen and rise to stardom.

LOGLINE: Fictional story on a year in the life of Austria’s Empress Elisabeth.

LOGLINE: When fisherman catch a beautiful woman in their net, mistrust and murder follow.

LOGLINE: An unusually harsh drought causes a dilemma for longtime couple Virginio and Sisa: Do they continue as they were or resist?

LOGLINE: Meri returns home after her marriage falls apart but things are not going well, so she auditions for a film role.

LOGLINE: Members of a working-class family pursue dreams of escaping the lives laid out for them by society.

In the Heart of the Machine

LOGLINE: Twenty-five-year-old woman adopted by a French couple seeks out her birth parents during a trip to South Korea.

LOGLINE:A young girl fights to preserve her father’s legacy on a West African plantation in the 1960s.

LOGLINE: Venice player based on the real-life “Spiniak Case” revolving around businessmen trafficking in foster-care children

The Kings of the World

LOGLINE: San Sebastian competition pic on street kids from Medillin who leave the city to live on
and one of them inherited from his grandmother.

Domingo and the Mist

LOGLINE: Cannes’ Un Certain Regard entry centers on a Costa Rican man who fights attempts to destroy his home for a highway.

LOGLINE: Locarno and Sarajevo fest winner is an autobiographical story about one brother trying help the other in the wake of his suicide attempt.

LOGLINE: San Sebastian competition player is about conductor Josef Mysliveček, nicknamed the Bohemian, who was a mentor
of Mozart’s.

LOGLINE: Zar Amir Ebrahimi won the actress prize at Cannes for this story of a journo who investigates a serial killer in the Iranian holy city of Mashhad.

LOGLINE: An Afro-European woman is sheltered by three kids in dangerous area of Santo Domingo.

LOGLINE: 2021 Toronto entry about a woman who is expected to keep her postpartum depression invisible and descends into madness.

LOGLINE: Celebrated Estonian basketball team Kalev must decide whether to participate in championship games in 1990 when the Soviet Union is on the brink of collapse.

LOGLINE: Portrait of Gen Y trio growing up in Helsinki, which unspooled in TIFF digital screenings.

LOGLINE: Venice prizewinner centers around a real-life infanticide court case in which the mother, a doctoral student, claims sorcery as the culprit.

LOGLINE: A harmless reunion turns into a gathering about holding a former bully to task. Unspooled at TIFF.

All Quiet on the Western Front

LOGLINE: Teen soldier faces the terrifying facts of trench warfare during World War I; based on Erich Maria Remarque’s novel.

The Silence of the Mole

LOGLINE: In the 1970s, journalist Elías Barahona infiltrated the repressive government; doc traces the effects of this mole in cracking Guatemala’s hidden history.

Where the Wind Blows

LOGLINE: Set in the 1990 taxi blockade of Budapest, film shows the struggle for democracy as high gas prices consume the country.

LOGLINE: Berlin Panorama player is a coming-of-age tale of boys who feel left out.

LOGLINE: Batak tribe parents pretend to fight so that their children will come home.

LOGLINE: Venice Horizons player centers around a day laborer who gets the chance of a lifetime when he’s cast in a movie.

LOGLINE: Older sister helps the younger one cheat so she can pass a university exam in order to better her life.

LOGLINE: Berlin Generation Kplus winner centers around a neglected girl sent to relatives for the summer.

LOGLINE: Based on a 2016 novel by Ermanno Rea about childhood friends who are separated when one leaves for Egypt while the other rises to become a Mafia boss.

LOGLINE: Cannes-bowing social drama is set in the future in which the government offers incentives to senior citizens who euthanize themselves.

LOGLINE: 2021 TIFF player centers around a 14-year-old girl who watches the violence in her Palestinian village from her kitchen.

LOGLINE: Animated pic on African superheroes who unite to fight an ancient wizard who threatens the world with a powerful artifact.

LOGLINE: Teen who lives in the village with three generations of her family has no privacy and longs for some freedom. Film won the IFFR special jury award.

LOGLINE: World premiering at Busan fest, pic centers around a couple being harassed by loan sharks.

LOGLINE: As Latvia tries to free itself from a collapsing Soviet Union, one student first joins the Russian military then films the battling sides. Pic unspooled at Tribeca.

LOGLINE: Montreal teen finds her mother’s mementos from her youth in war-torn Lebanon.

LOGLINE: This Venice player centers on an odd couple trying to find out what happened to their loved ones in a traumatic past.

LOGLINE: Animated story about young Icarus who tries to rescue his imprisoned friend.

LOGLINE: When her priestly brother dies, a 50-year-old woman is finally free of having to care for him.

Bardo, False Chronicle of a Handful of Truths

LOGLINE: Existential comedy follows a journalist who goes home to receive a prestigious award. The filmmaker cut 22 minutes after the Venice premiere.

LOGLINE: San Sebastian fest winner sees two enlistees who stumble on a carbonized body and try to identify and bury the remains.

The Elegy of Laurel

LOGLINE: World-premiering at the Sarajevo fest, this is the story of a professor in marital crisis who escapes to the wilderness where he falls for a girl who was once a snake.

LOGLINE: A wife watches her husband, a closeted tailor, fall for his handsome apprentice.

Butterfly on a Windowpane

LOGLINE: Busan entry about a brother who doesn’t want his sister to give up her dreams.

LOGLINE: Close-knit family suffers when the patriarch fails to surface from a dive.

LOGLINE: Drama about the 2007 police raids on the Ngāi Tūhoe community of Rūātoki in New Zealand.

The Happiest Man in the World

LOGLINE: In the aftermath of the war in Bosnia, a soldier seeks forgiveness from his victim.

LOGLINE: Alfred is in the middle of the Atlantic when World War II breaks out and neither he nor any of the other sailors have any weapons.

LOGLINE: Queer Palme winner centers on the effect in a traditional family when the youngest son joins a trans dancer.

LOGLINE: Celebrating his 45th birthday at a beach house, Jimmy tells his friends to whoop it up because he is going to commit suicide after the party.

LOGLINE: Tiger Award winner about an Ayoreo-Totobiegosode girl who turns into a bird and wanders in the forest after her village and all the people are destroyed.

LOGLINE: Poor and homeless woman is friendless until a “mechanical angel” comes to her rescue.

LOGLINE: Venice player is a sequel about a journolist who investigates the disappearance of his colleague.

LOGLINE: Cannes Critics’ Week entry about a little girl who is haunted by the spirit of her recently deceased grandmother, who was considered a witch.

LOGLINE: While her perceived innocence protects a drug addict from the men in rehab, Daria discovers that it comes at a price.

LOGLINE: The arranged marriage of their aunt results in bad consequences for twins and their family.

LOGLINE: A thriller about the life of a Serb family outside Kosovo.

LOGLINE: Widowed housewife follows her passion for Korean soap operas with a visit to Seoul.

LOGLINE: Teenage gymnast’s lies about how he got injured starts a chain of events that spirals
out of control in this Venice Horizons entry.

LOGLINE: B&W film about a brass band touring Austria on a bus.

LOGLINE: Detective investigating a death meets the widow of the deceased.

A Piece of the Sky

LOGLINE: Berlin competition player centering on a couple’s travails when mental illness takes over the man.

LOGLINE: Country boy manages to get into a prestigious Islamic school where he becomes embroiled in its politics.

LOGLINE: When the owner of a peach orchard dies, his heir wants to sell off the land on which the Solé family has been growing fruit for generations.

LOGLINE: Deadly night-market shooting is viewed from different characters’ viewpoints, along with varying outcomes; based on real events.

LOGLINE: Adaptation of Adam Shafi’s novel about an Indian-Zanzibari girl fleeing an arranged marriage, set against the background of Zanzibar’s fight for independence.

One for the Road

LOGLINE: Dying bartender goes on a road trip with his friend to seek forgiveness from those he had wronged in this Sundance World Dramatic selection.

Under the Fig Tree

LOGLINE: Cannes Directors’ Fortnight player chronicles a day in the life of women who harvest figs.

LOGLINE: A son who goes to a village for his father’s funeral is trapped there after witnessing a murder; the helmer adapted his own novel.

LOGLINE: Garbage man in Kampala grieves the death of his infant son in this inaugural entry from Uganda.

LOGLINE: Family living in Donetsk on the Ukraine-Russia border faces upheaval when flight MH17 crashes near them.

LOGLINE: When 9-year-old Yahya and his friend find an Oscar statutette in a poor Iranian village, Yahya’s boss helps them search for the origial owners.

The Employer and the Employee

LOGLINE: Relations between two young men at the same workplace are strained by an accident.

LOGLINE: Father hunts for his kidnapped daughter and the underground forces that have taken her.