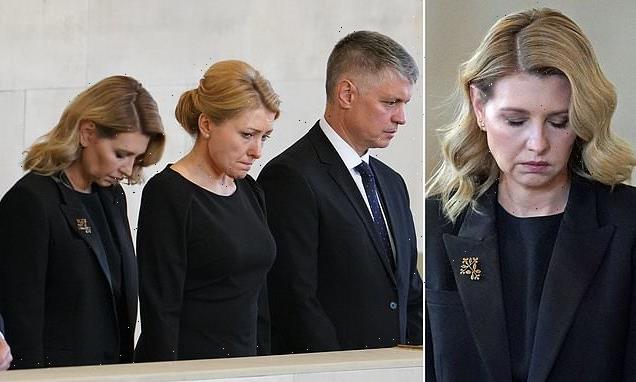 The wife of Ukrainian president Volodymyr Zelensky has been pictured paying her respects to the Queen as she attended Westminster Hall this afternoon where the late monarch is lying in state.

Olena Zelenska, who is representing her husband President Zelensky, was pictured shortly before 4.45pm with other members of the Ukrainian contingent.

Dressed in all black, she wore a gold pin inspired by a rushnyk, a piece of fabric embroidered with traditional Ukrainian symbols, on her blazer.

As she contemplated the solemn occasion, her expression was sombre and she bowed her head in respect.

Ms Zelenska stayed in the hall for several minutes as members of the British public filed past below. 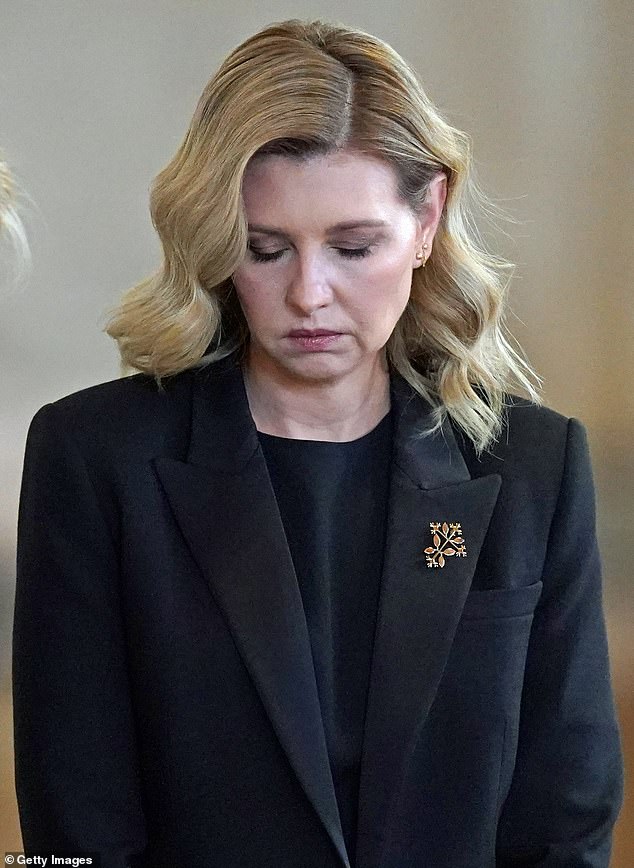 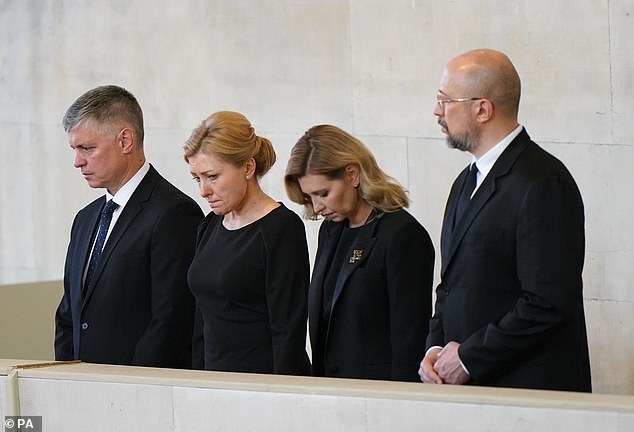 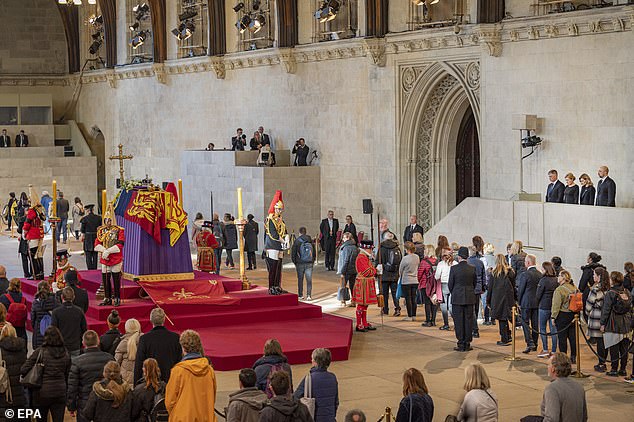 First Lady Olena Zelenska (pictured with members of the Ukrainian delegation, right) appeared pensive as she attended the lying in state of Her Majesty at Westminster Hall

Ms Zelenska’s trip to Westminster Hall came ahead of her attending a Buckingham Palace reception this evening, hosted by King Charles.

Her arrival in the UK had been hotly anticipated after it was confirmed that her husband, President Zelensky, would be remaining at home to lead the war effort.

He will remain in Ukraine as his country continues to battle back Vladimir Putin’s invading forces.

After viewing the Queen’s casket at Westminster Hall, Ms Zelenska had an audience with the Princess of Wales.

The pair, both wearing long black dresses, sat either side of a fireplace on gingham armchairs with pink orchids on display in the background. 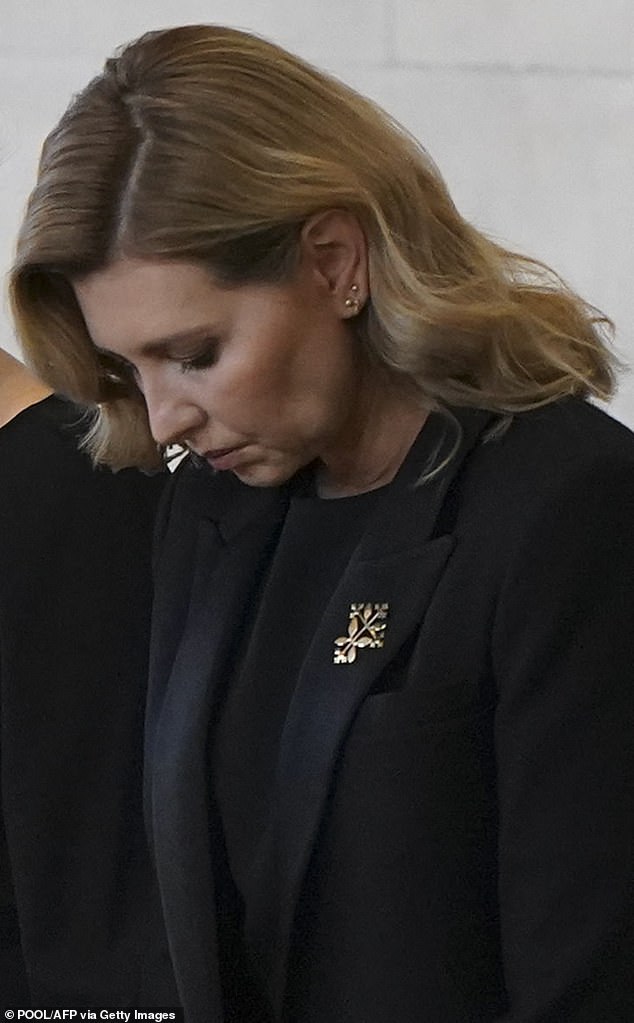 Dressed in all black, she wore a gold pin inspired by a rushnyk, a piece of fabric embroidered with traditional Ukrainian symbols, on her blazer 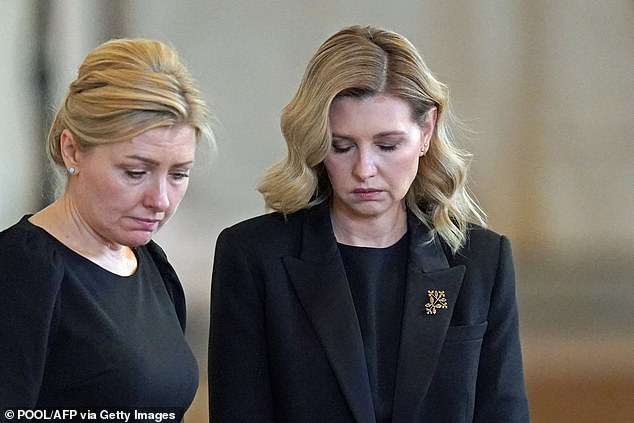 The wife of Ukraine’s President Zelensky, Olena Zelenska, bows her head as she pays tribute to the late Queen Elizabeth II 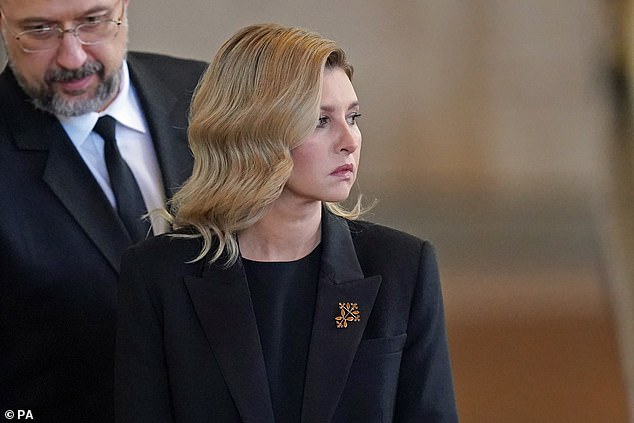 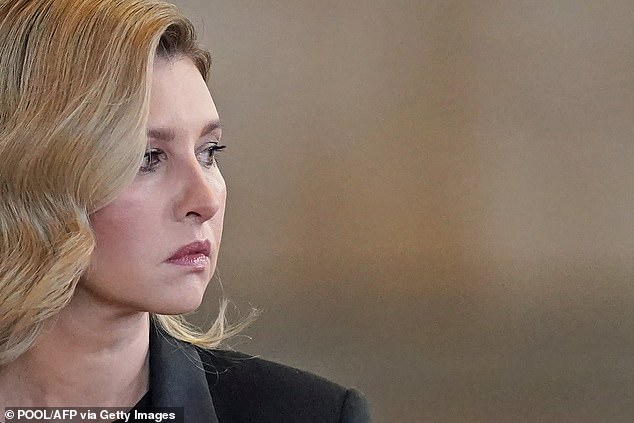 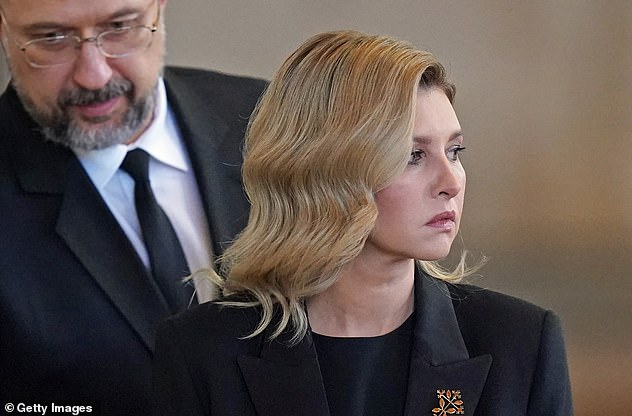 A line of foreign dignitaries entered Westminster Hall today, including French President Emmanuel Macron and his wife Brigitte, and US president Joe Biden and his wife Jill, ahead of the reception this evening.

Dubbed ‘the reception of the century’, the Buckingham Palace event was attended by 1,000 VIPs.

As well as senior members of the Firm, many international dignitaries were there, including US President Joe Biden, New Zealand’s prime minister Jacinda Ardern and Canadian premier Justin Trudeau. 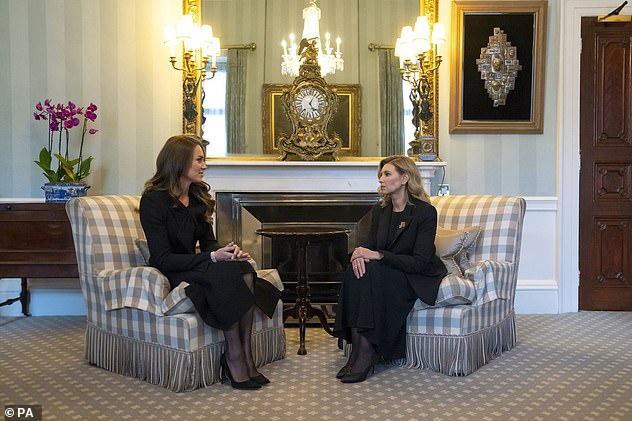 The wife of Ukraine’s President Zelensky, Olena Zelenska, spoke with the Princess of Wales this afternoon at Buckingham Palace 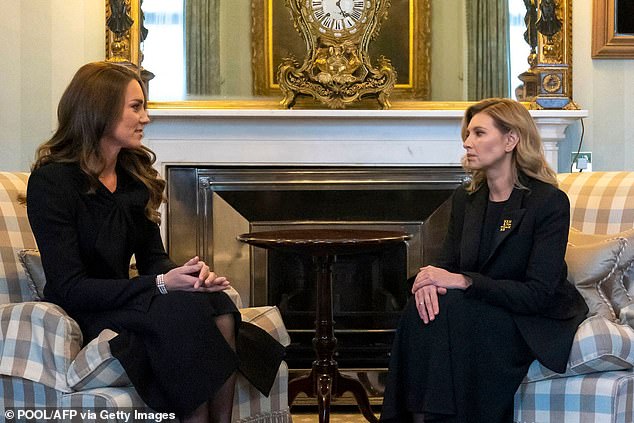 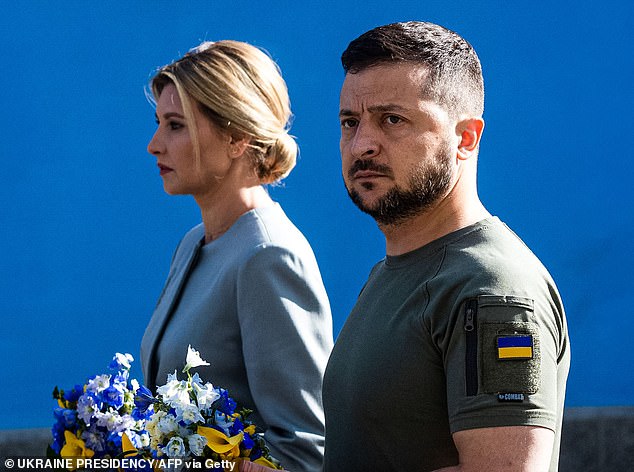 The First Lady (left) is in the UK representing her husband President Zelensky (right), who is remaining at home to lead the war effort

Foreign royals also took part in the event, with King Felipe and Queen Letizia of Spain, and King Carl XVI Gustaf and Queen Silvia of Sweden on the guest list among others.

The royal couple were among the first monarchs to view the monarch lying-in-state at Westminster Hall.

Putin, who has previously had an audience with the Queen, has not been invited, despite offering his condolences to the Royal Family last week.

However, the guest list did feature a string of controversial strongmen, including Bolsonaro, who was filmed today giving a thunderous speech from the windows of the Brazilian Embassy in London to a cheering crowd waving the national flag. 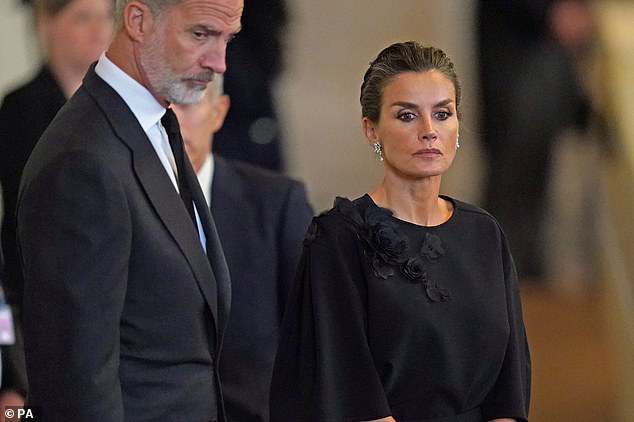 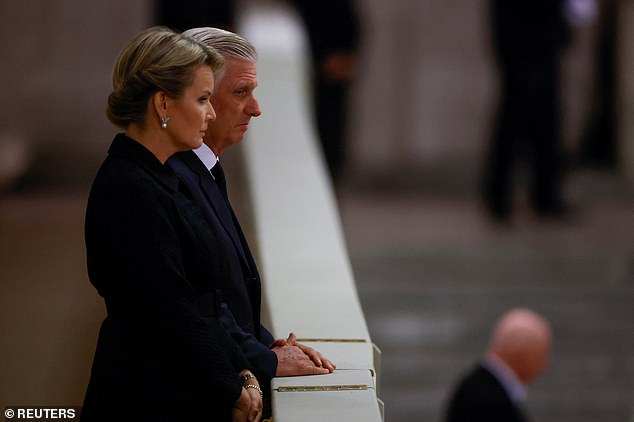 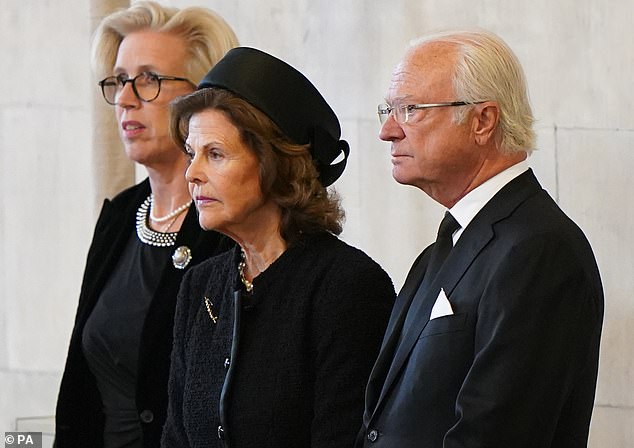 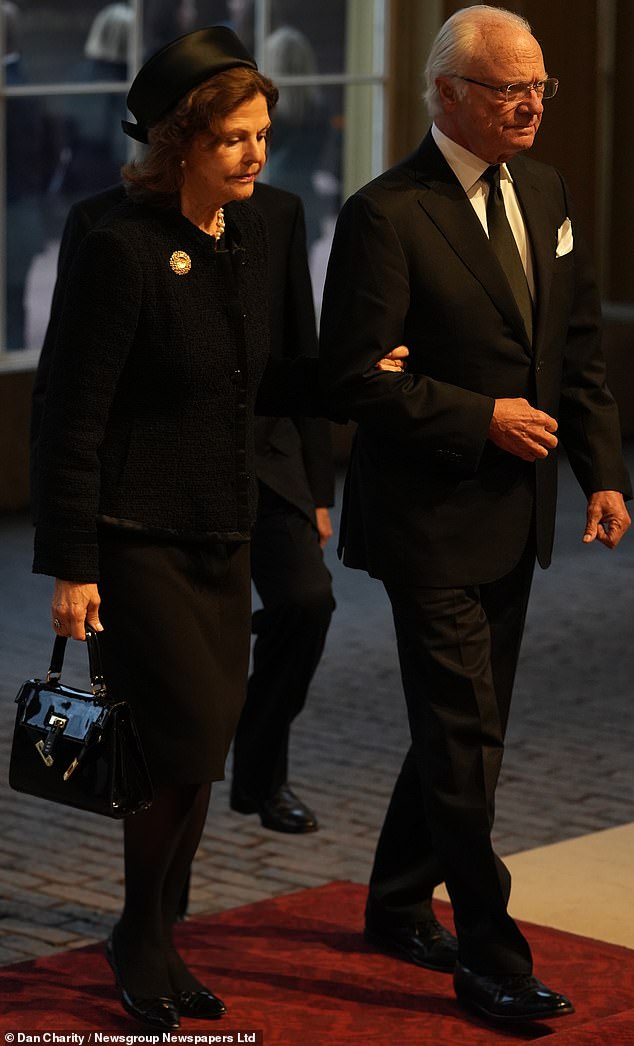 Wueen Silvia of Sweden arrived at Buckingham Palace with King Carl XVI Gustav to be hosted by King Charles III, after paying their respects to Her late Majesty in Westminster Hall earlier today 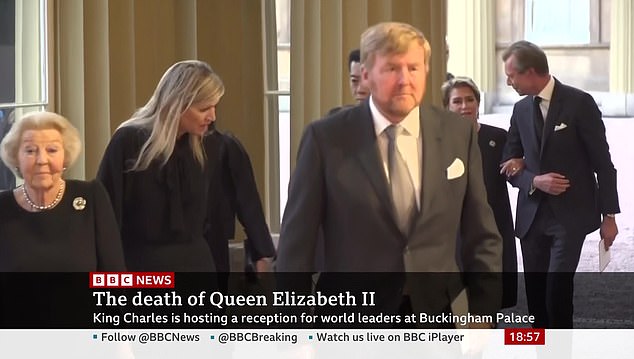 And today the Royal Embassy of Saudi Arabia confirmed that Mohammed Bin Salman, known by the abbreviation MBS, had been invited to attend the funeral tomorrow.

Recep Tayyip Erdogan, the authoritarian ruler who has jailed hundreds of journalists and busily dismantled Turkish democracy, is also coming to the funeral.

China has announced it will send its vice-president, Wang Qishan, but was barred by parliamentary leaders from the lying-in-state.

Due to strained ties, the UK opted to invite ambassadors, not heads of state, from Iran, Nicaragua and North Korea. Meanwhile, Russia and Belarus are among a small group of nations excluded altogether following Putin’s invasion of Ukraine.