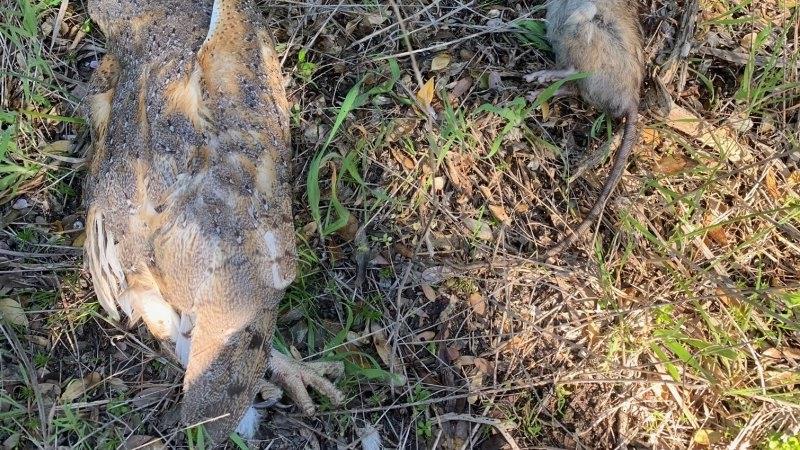 It was probably a painful death for the eastern barn owl that Blairgowrie resident Kent Stannard found while walking on the Mornington Peninsula in September.

The owl lay on its stomach with its pale, heart-shaped face turned towards the sand, and next to it lay the body of its intended prey, a dead rat. 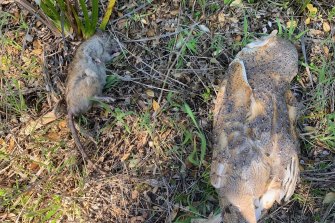 A dead owl, and its rat prey, found on the Mornington Peninsula by a local resident, believed to have died after eating anticoagulant rodent poison.

When Stannard shared the image on social media the next day, other residents also said they had come across the bodies of dead birds of prey in the area, and one posted a photo of a dead goshawk.

The dead owl and rat lying together offered Stannard, a marine researcher, a clue about the likely cause of death: the lethal effect of anticoagulant rodenticides, also called second-generation rat poisons, which kill birds of prey like owls and kites.

“I’ve grown up on the coast, and it’s the first time I’ve seen a dead owl,” said Stannard. “It was even more bizarre to find the owl and its prey side by side – very disturbing.”

The anticoagulant poisons have been restricted from general sale in the US, Canada and European Union but can be bought in supermarkets and hardware shops in Australia.

They take a hidden toll because birds of prey can devour many rats and mice that have taken bait and the poison takes some time to work.

BirdLife Australia, the largest bird advocacy group in the country, has been campaigning against anticoagulant rodenticides for years, and is now calling on Australia’s largest hardware chain, Bunnings Warehouse, to stop stocking them.

There are about 25 rat poisons available at Bunnings stores, and all but two are second-generation anticoagulant poisons, BirdLife says.

BirdLife recently commissioned an analysis of the livers of 38 deceased endangered Powerful owls found in Sydney and on its urban fringes to check for rodenticide poisoning. 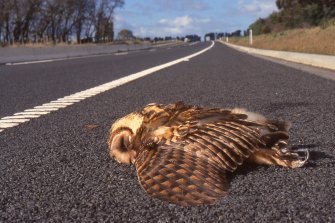 A dead Powerful owl in Victoria.

Powerful owls are a threatened species that live across the eastern seaboard, including in the suburbs of Brisbane, Melbourne and Sydney. 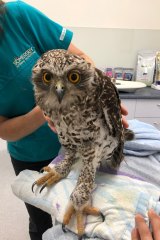 A sick powerful owl in Victoria, also believed to have eaten a poisoned rodent.

The samples were collected largely before the peak of the mouse plague earlier this year, so reflect the “usual” contamination of the food chain for these birds.

Dr Holly Parsons, the urban bird program manager at BirdLife, said other products were available to trap rats and mice, including traps and first-generation anticoagulant rodenticides that don’t travel as far up the food chain.

Even if the rodenticide didn’t kill the birds outright, it made them vulnerable to being struck by a car because they were disorientated, said Dr Parsons.

“These birds are flying around not at their best and in an urban environment where there are lots of risk from roads and people that is a dangerous state to be in,” Dr Parsons said.

In recent years anticoagulants rodenticides have been found in the bodies of dead Tasmanian eagles, which shows how far the chemicals travel up the food chain because the eagles don’t eat rodents but the birds who prey on them.

Dead owls have also been discovered near Wollongong, south of Sydney, where Monty Madden, 10, and Millie Schulz, 12, found a dead endangered sooty owl under a bush in their backyard. Shortly afterwards, a neighbour discovered a dead tawny frogmouth. 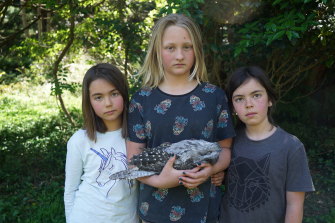 A number of dead birds of prey have been found in the area, according to local wildlife rescue volunteers. “It was very sad to see that this amazing bird had been killed,” said Millie.

The children made an owl-themed “spoonville” village in their front yard to raise awareness of the issue of anticoagulant rodenticides, and have also written to Bunnings asking it to stop selling them.

“To Bunnings,” says Monty’s letter. “We found a dead sooty owl in our back garden which has been killed by your stupid rat poison.” 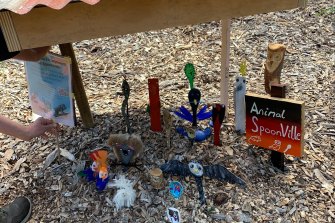 The animal-themed spoonville dedicated to the owls.

Adrian Pearce, the Bunnings general manager of merchandise, said the company recently met with BirdLife Australia and had been working with suppliers to include additional information on packaging about which products are first or second generation rodenticides.

The company is training staff and will separate the different varieties of rodenticides on shelves, he said.