Rituals offer connectivity not only to those who participate, but to those who observe. Their familiarity is reassuring, and the shared experience a bond. Of course they are practised within broader cultural traditions, and these only survive because, while they may be rooted in iron-rod conservatism, they have just enough give to accommodate change. Without that they die out.

If the ritualistic dance and music of southern Sri Lanka is unfamiliar to most, its implicit generosity of spirit is not. This spills from the joy and grief of the singing, from the energy of the drumming and from the exuberance of the dance. Most intriguingly one hears a midpoint between the music of India (in the elaborate ornamentation of the sung melodies) and East Africa (in the rhythms and the sound of the two-headed yak bera hand-drum). 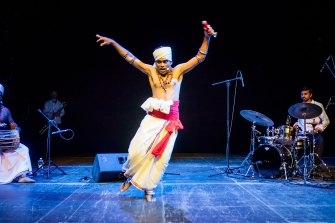 The concert brought together Sri Lanka’s Baliphonics ensemble and a five-piece version of the Australian Art Orchestra (AAO).

This concert brought together Sri Lanka's Baliphonics ensemble and a five-piece version of the Australian Art Orchestra (AAO). Led by drummer/composer Sumudi Suraweera, Baliphonics features singer/dancer Susantha Rupathilaka and drummer/singer/dancer Prasanna Rupathilaka, with the point of this joint project being to investigate what possibilities were opened up by interacting with improvisers from outside of their tradition. To this end, Suraweera created pathways into the music for the AAO's artistic director, Peter Knight (trumpet), Reuben Derrick (clarinets), Reuben Lewis (trumpet, electronics), Mary Rapp (cello) and Carl Dewhurst (guitar).

On one level the concept can be deemed a success, in that a deep universality emerged, with Derrick's clarinet playing, in particular, melting into the Sri Lankans' music and adding some piquant spice. But you also wondered how much would have been lost had Baliphonics performed alone. That is, the AAO members' contributions, while intriguing and often imaginative, were largely peripheral rather than intrinsic; decorative rather than truly expanding the options of the tradition. The heart of the performance still lay in the two singers, in the dialogues between the yak bera and Suraweera's drum-kit, and in the heavily stylised dancing.