‘Octomom’ Nadya Suleman revealed she uses exercise to escape the stress of life as a single mother of 14.

California-based Nadya, 43, who now goes by the name of Natalie, told ITV morning show Lorraine that she relies on the gym to keep herself fit amid the ‘organised chaos’ of home.

The mother-of-14, whose octuplets celebrate their tenth birthday on Saturday, also  told how she will ‘die’ caring for her severely autistic son, Aidan, who is 13 but has the mental age of a toddler.

‘My biggest challenge is my severely autistic son,’ she admitted on the programme. 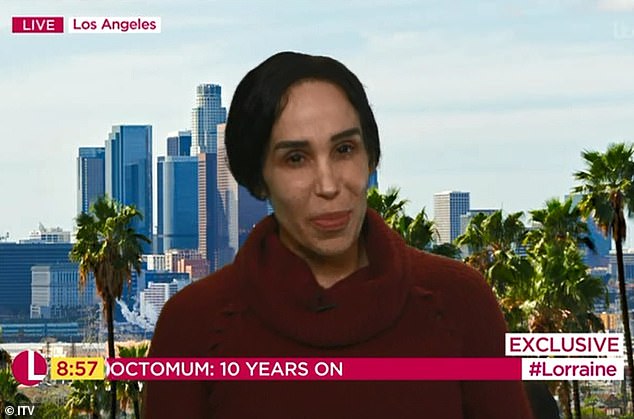 Ocotmom Nadya Suleman, 43, told ITV morning show Lorraine (pictured) that she relies on the gym to keep herself fit amid the ‘organised chaos’ of life as a single mother of 14 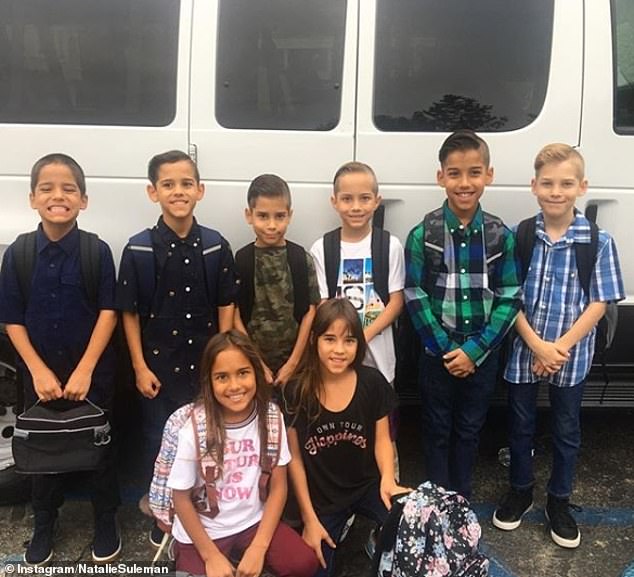 Natalie made medical history when she delivered her eight children on 28 January 2009. The siblings became the longest surviving set of octuplets to be born in the US. Pictured, the octuplets, Makai, Josiah, Isaiah, Jonah, Maliyah, Jeremiah, Nariyah and Noah last year

‘He’s 13 going on one. He’ll be my baby forever. I have been his sole care provider since he was born… I will die taking care of him, that’s just the way I am.’

Natalie made medical history when she delivered her eight children – six boys and a girl – on 28 January 2009. The siblings became the longest surviving set of octuplets to be born in the US.

At the time Natalie was already a single mother of six and raised all 14 children alone.

Speaking to Lorraine today, she explained she copes with the stress through exercise, climbing 500-550 floors on a Stairmaster – the equivalent of 11 miles.

‘I have to, it’s my mental and physical survival,’ she said. ‘It sounds crazy. But that my to constructively channel the stress… When I ran away from the “Octomom” persona I went right back into my healthy lifestyle…I jumped into the half marathons.’ 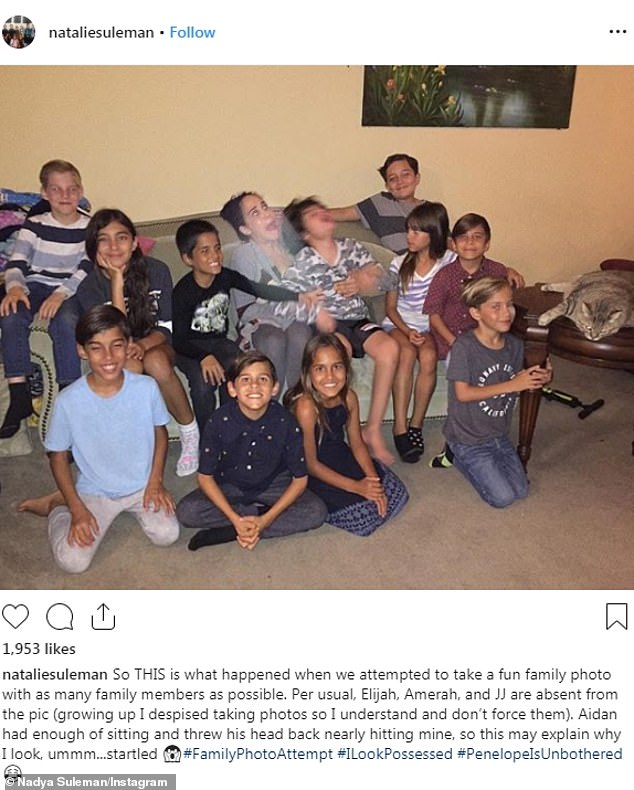 The mother-of-14 (centre) also told how she will ‘die’ caring for her severely autistic son, Aidan, 13, pictured on his mother’s left alongside his siblings in a family photo taken last year

Natalie, who also works as a counsellor, revealed she kept the house organised by distributing the chores among her children.

They have been allocated chores,’ she said. ‘I sometimes have to remind them we are a team together.

‘In all honesty, my little kids [the octuplets] and I, all nine of us, work more as a team than my older one. My oldest ones do their own thing and I really do re-enforce that.

‘My oldest son is a surfer and my oldest teen wants to be a doctor and she goes to medical core and is volunteering at a hospital. My little kids and I, all the responsibility goes on us.’

Natalie, who often posts about her children on Instagram, began IVF treatments in 1997, when she was 21 years old. 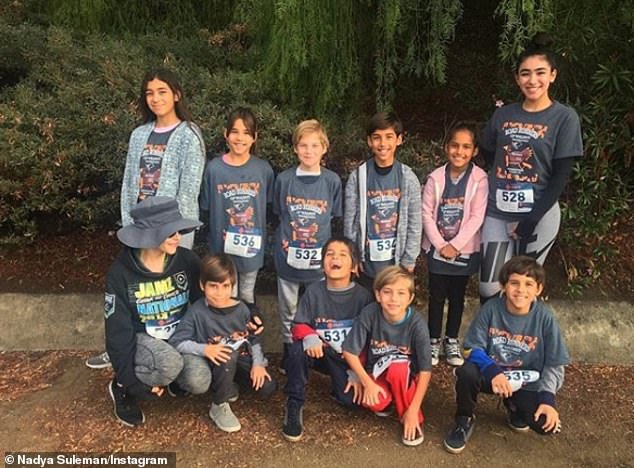 The proud mother often shares photos of her children on her Instagram account, including this one of the octuplets with two of their big sisters, shared over Thanksgiving last year

Suleman continued IVF treatments which resulted in three further pregnancies (including one set of fraternal twins) for a total of six children (four sons, two daughters).

Addressing the scandalous headlines over the years, Natalie said a lot of ‘fabricated’ stories had been circulated about her.

She also conceded she had allowed for false stories to be circulated to the media out of ‘desperation and scarcity to provide for my kids’.

She continued: ‘I have tried to for ten years but it always haunted me. Had I not gone through the struggles and the obstacles I had, I would not be as strong as I am today. I believe those impediments have forged, shaped and strengthened my character.’

This weekend her youngest children will turn ten and she revealed the birthday celebrations would be ‘busy’ and that the children were looking forward to their vegan cake.

Asked if she had any regrets or if she would change things in any way, she concluded: ‘I wouldn’t not in regard to the kids… I wouldn’t change.’