The number of coronavirus patients in Victorian hospitals has almost doubled in just one week as the government vowed to expand a doorknocking program to ensure people required to self-isolate remain at home.

Hospitalisations spiked from 349 to 607 in the week to Friday, with 41 patients now in intensive care. 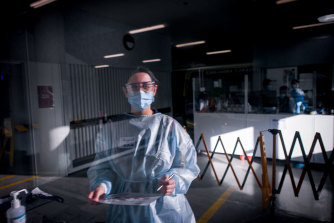 A nurse at the Austin Hospital in July.Credit:Eddie Jim

The biggest aged care clusters in Melbourne recorded small increases on Friday, but therehave been new infections at nursing homes in regional Victoria this week, which have worried local health services.

There were 450 new cases recorded on Friday and 11 people died, bringing Victoria’s death toll to 181.

Premier Daniel Andrews said health teams and Australian Defence Force personnel had knocked on the doors of 1150 Victorians on Thursday to ensure those people were self-isolating properly.

The vast majority of those people were at home, he said, but 150 could not be found.

"They have been referred to Victoria Police," Mr Andrews said.

"Of those 150 people, [there] will be a percentage not doing the right thing. A much larger percentage, I hope, will be able to convince police they had a perfectly good reason not to answer the door when ADF and public health officials knocked."

Cases among healthcare workers also rose substantially, with 139 more cases on Friday bringing the total to 1527.

"That, I think, relates to the closeness of interaction that nurses are engaged in with their care provision," he said.

There were three new cases at the Epping Gardens Aged Care home, bringing the total to 172. St Basil’s Homes for the Aged in Fawkner recorded one new case with infections now totalling 161.

Coronavirus infections are spreading at nursing homes in regional Victoria as authorities scramble to prevent some of the state’s most vulnerable and elderly people from contracting the disease.

New cases have been recorded in Geelong, Traralgon and Wonthaggi aged care homes this week with cases expected to continue rising in coming days.

The Australian Defence Force is providing logistics and nursing support at the Opal South Valley nursing home in Geelong where 26 residents and nine workers have recorded positive tests.

One resident has died in the outbreak and about seven residents are now in hospital.

"Because it’s a highly contagious virus in a closed setting, I would expect there will be more positive cases in the next few days," he said.

Professor Athan said none of the hospitalised residents were in intensive care but they were :not out of the woods yet".

Geelong has the greatest number of cases in regional Victoria with 150 infections on Friday, compared to 131 the day before.

A Bupa aged care home in Traralgon reported four infections in residents and a further four among staff members.

This week the Kirrak House Residential Aged Care home in Wonthaggi confirmed a worker tested positive three days after their most recent shift.

But Barwon Health is also working to contain an outbreak at the Golden Farms chicken abattoir in Geelong, where more than 40 cases have now been confirmed.

Professor Athan said the abattoir was expected to reopen next week if it met the required to recommence operations safely.