In the 21st century, millions of women around the world will reach the age of 45 without having given birth. Some will experience infertility, others will choose childlessness early in life, and many will spend years debating whether to have a child.

Childless individuals may think that they are alone in this experience. But they aren't. Nor is childlessness something new.

It is easy to ascribe childlessness to modern historical developments like the pill, second-wave feminism or even periods of economic downturns or war. But in actuality, childlessness – whether by nature, circumstance or choice – has existed for women in the United States and across north-western Europe, Canada and Australia for centuries. 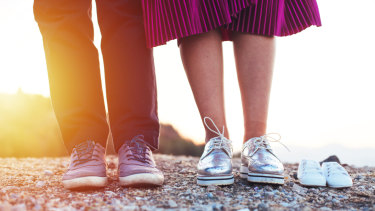 Childlessness has existed for women in the United States, north-western Europe, Canada and Australia for centuries.Credit:istock

That's because while these modern factors shape rates of childlessness, at its core the decision to have children is linked to something far older: the institution of marriage. And changes in the timing and significance of marriage over the past four centuries have given women more control over biological decisions about children.

Even as these changes have strengthened the significance of marriage as an institution, they have also made the institution less about procreation and more about economic opportunity and personal fulfillment.

As early as the 1500s, women in the towns and villages of north-western Europe began to postpone marriage to their mid-20s, rather than their early teens, when they first became biologically capable of motherhood.

Instead of marrying young and joining their in-laws' households, they now wanted to set up an independent household, which took time and money. As young adults, they worked to save for a dowry, to purchase the linens and household pots and pans that would last their entire marriage.

This elevated notion of marriage ironically left wide open the possibility that many people would never marry, and never have children, at all.

Once individuals postponed marriage, a combination of personal choices and economic, cultural and biological constraints shaped fertility outcomes. This made childlessness more common. In pre-revolutionary French cities, 15 to 22 per cent of the adult population remained single and, probably, without children.

This new approach to marriage and motherhood gave women more flexibility and independence. In recent years, historians have uncovered an astonishing record of early modern women's capacity to support themselves as domestic servants, traders, seamstresses, moneylenders, laundresses and in many other trades, as well, despite legal prohibitions. Some, like poet Mary Masters, came to terms with never becoming mothers.

Across the Atlantic in the American colonies, lifelong childlessness was less common. Among European settlers, the biblical injunction to "be fruitful and multiply" and the need for children to labor in fields led to earlier marriage and lots of progeny.

US founding father Benjamin Franklin's salute to population increase through early marriage, published in Observations Concerning the Increase of Mankind and the Peopling of Countries (1755) remained popular in the early republic and resonated with national expansion into the Northwest Territory and Louisiana Purchase. For enslaved women, reproduction was cruelly enforced through rape and punishment of the barren.

Nevertheless, in the 1800s, rates of singleness among white women in the United States rose in line with those of western Europe, as more women believed they could do work they cared about and fight for equality and suffrage without the burden of raising children.

Moreover, by the late 1800s, marriage and child-bearing slowly became pulled apart. More women – especially urban women and those living in New England – began to limit their child-bearing within marriage, even if they wed during their fertile years.

With industrialisation and democratisation driving economic growth in the United States and western Europe, an improved standard of living and higher levels of female education made more couples aware of birth control. This knowledge often went unspoken because of legal constraints and fear of impropriety.

Yet, these couples saw contraception as a means to focus on work and philanthropy, and to avoid the fearsome mortality of childbirth, even if sponges and pessaries were not particularly reliable.

Of course, this changed with the post-World War II baby boom, when family became a refuge from the horrors of World War II and fears of the Cold War. In the US, the federal government supported family formation through the GI Bill and tax credits. Women born around 1935, who came of age after the war, had the lowest levels of childlessness on record: only 10 per cent in the United States.

And yet, this trend was not just a historical anomaly, it was also short-lived. By the 1970s, more reliable birth control, frank discussion about sexuality and women's open claim to control their own bodies led to an embrace of childlessness once again.

And many women reiterated the same arguments as their childless predecessors regarding economic opportunity, independence and more self-fulfillment.

In a 1974 episode of the television program All In The Family, which reached 40 million viewers, Gloria argued, "Ma, I believe a woman is meant to be a person first and then maybe a mother. I don't need to give birth to a baby to make me feel useful!"

The very existence of such large numbers of childless women and men gives us perspective on childlessness in the present. We might think that we're living in a unique situation with little to guide us. Instead, the long history of childlessness can help us to debunk myths, tell our stories and expand the range of our possibilities. It's time to draw on the vast human experience with childlessness.

Rachel Chrastil is professor of history at Xavier University and the author of How to Be Childless: A History and Philosophy of Life Without Children.