Defence officials have confirmed they are not exploring alternatives to the $45 billion frigates program, despite an internal engineering report showing the warships will be “substantially” slower and have a shorter range than originally intended.

Officials said the internal review of the frigates, the first of which is due to enter service in 2033, had been taken “out of context” and it was not a “project of concern”. 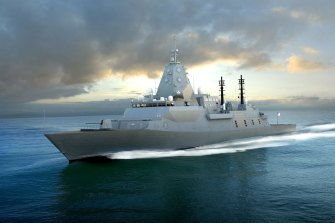 The Hunter-class frigate program has been criticised in recent weeks.

The report, revealed in The Australian newspaper this month, also warned putting in a US combat system and ­Australian-designed radar raised a “significant potential risk” because they had pushed the “space, weight, power and cooling margins” to their limits.

Defence’s deputy secretary in charge of naval shipbuilding, Tony Dalton, said on Thursday the frigates were a “high-risk program” given the complexities involved, but the issues raised in the engineering report were already being addressed.

“One of the issues with this particular document and its unfortunate arrival in the public space is that it has been taken out of context,” he told a Senate estimates hearing in response to questions from Labor senator Kimberley Kitching.

“The document itself says that it is focusing on a point in time on these issues, and I want my engineers to be pessimistic, I want them to test with the designers all of these [issues].

“The actions and solutions that are under way through appropriate engineering forums are not mentioned in this document for the sake of brevity – so you’ve got one little slice of the story and there are all these other slices of the story that, admittedly in that document, they don’t cover.

“So the actions and solutions that are part of the engineering design process … we are moving our way through very meticulously.”

Asked whether he agreed with Defence Minister Peter Dutton’s characterisation that it was a “low-level report”, Mr Dalton said it was a “lower-level internal review”.

Is Australia ready for war?

Mr Dalton also confirmed Defence had not been asked to consider any alternatives to the frigates program.

Finance Minister Simon Birmingham said “some of the public presentation” of the internal review had been “exaggerated because it doesn’t assess its mitigations”.

Construction of the first frigate was initially meant to start later this year but Mr Dutton agreed to an 18-month delay last July.

The engineering report described the revised timeline as “tight”.

Labor’s defence spokesman, Brendan O’Connor, said the frigates program was facing serious issues and the government had no back-up plan.

“Senate estimates today revealed that the department has not been asked by the government to explore alternative platforms to bridge the capability gap,” he said.