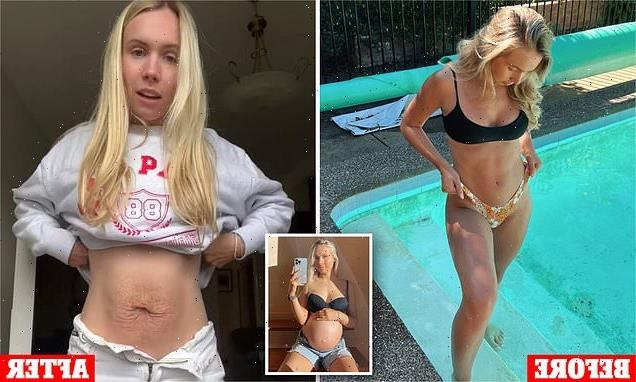 Young mum, 24, who thought her body would ‘bounce back’ straight after birth shares the ‘reality’ in a powerful video

A young mum has revealed the toll pregnancy and giving birth took on my her body and slammed cruel trolls who tried to body-shame her.

Mia Somerville, from Canberra, shared what her body looked like before pregnancy compared to now showing the loose skin around her stomach in a viral TikTok video.

She told news.com.au she thought her stomach would ‘bounce back’ after giving birth but, despite having to ‘get used to’ her new body, said she wouldn’t change being a mum ‘for the world’.

The 24-year-old also had to hit back at body-shamers who commented on her video calling her stomach ‘horrible’. 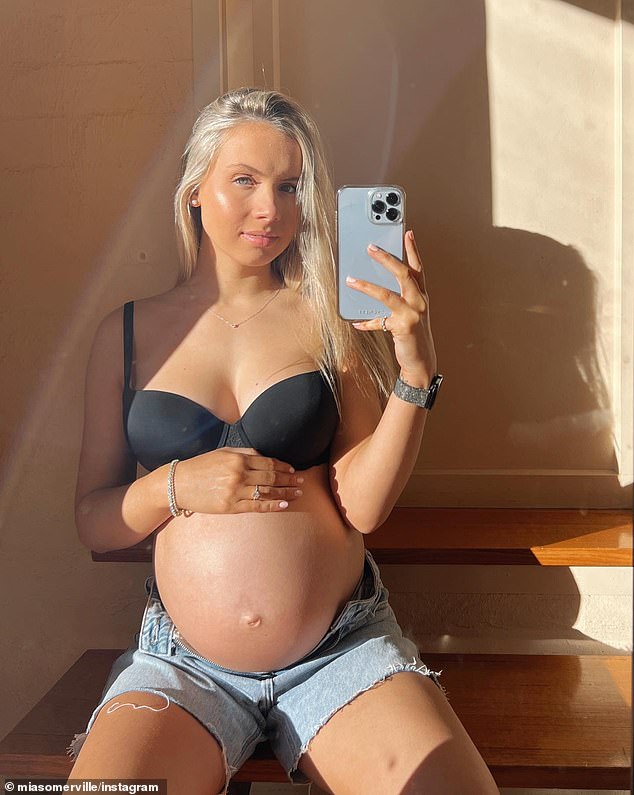 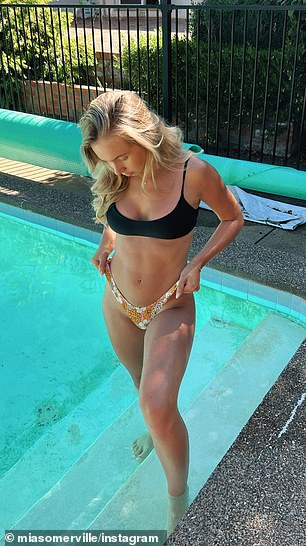 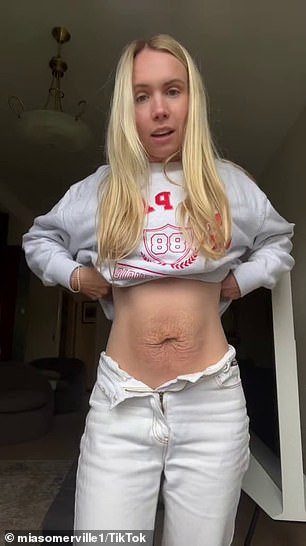 Before and after: In a viral TikTok clip, the 24-year-old showed what her body looked like pre-pregnancy (left) then revealed what her stomach looks like three months post-partum (right)

‘So this was my body when I was four weeks pregnant,’ Mia said in the clip pointing to an image of her in a bikini with a flat stomach just days after she found out she was pregnant.

‘I had a great stomach, loved my body, was very body confident and pregnancy changes things, obviously I have this beautiful little girl now and I would not change anything for the world,’ the mum said.

Since giving birth to her daughter Pippa in September, Mia said two physios have told her if she wants to get her pre-pregnancy stomach back she would need plastic surgery.

‘I want to put this on the record, I am not saying that my new body is bad, it’s just different,’ the mum said before lifting her shirt to show the loose skin around her stomach.

‘I got to forty plus six, a lot of stretching happens in those last few weeks, I have a three-finger ab separation, mild, mild prolapse and a belly button that will probably never look the same,’ she explained.

‘This is just what I’m getting used to and what things look like after you give birth.’

Many of the clip’s 2.4million viewers found Mia’s message inspiring with one saying: ‘It’s so relieving seeing someone else with the same stomach as mine before pregnancy and then the same after!’.

‘So refreshing to see a realistic postpartum body!’ another agreed. 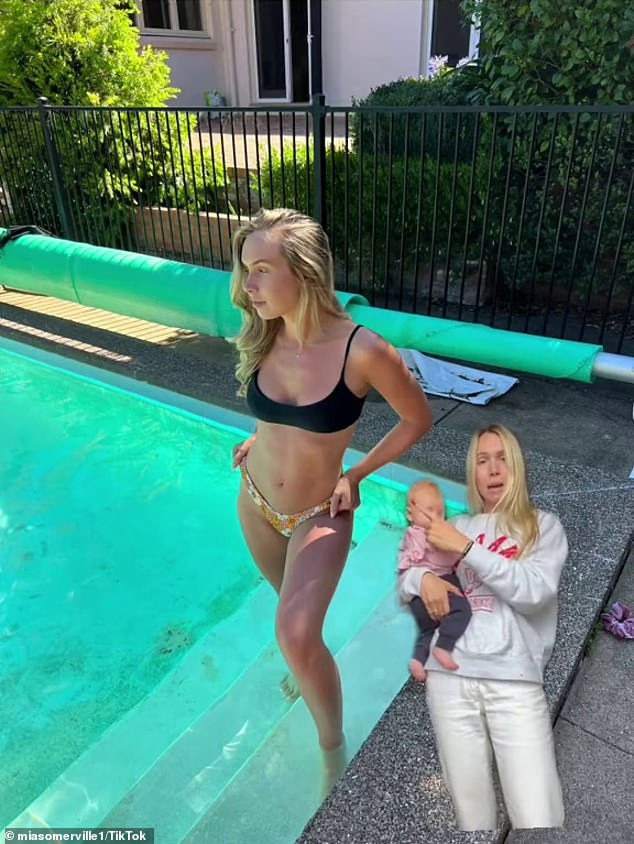 Many of the clip’s 2.4million viewers found Mia’s message inspiring But not all the comments were kind as one troll said her stomach ‘looks horrible’

But not all the comments were kind as one troll said her stomach ‘looks horrible’ and another wrote her video made them ‘scared to have children’.

Mia clapped back at the body shaming bullies saying: ‘I look amazing – shut up!’

‘It’s come to my attention that we don’t know what post-partum bodies can look like,’ she said in another video response.

‘It looks like stretch marks, loose skin, things not looking the way they did before hand, this is what can happen,’ she said.

She said she was baffled by how many people were so concerned with their looks, they would ‘forgo’ starting a family.’ 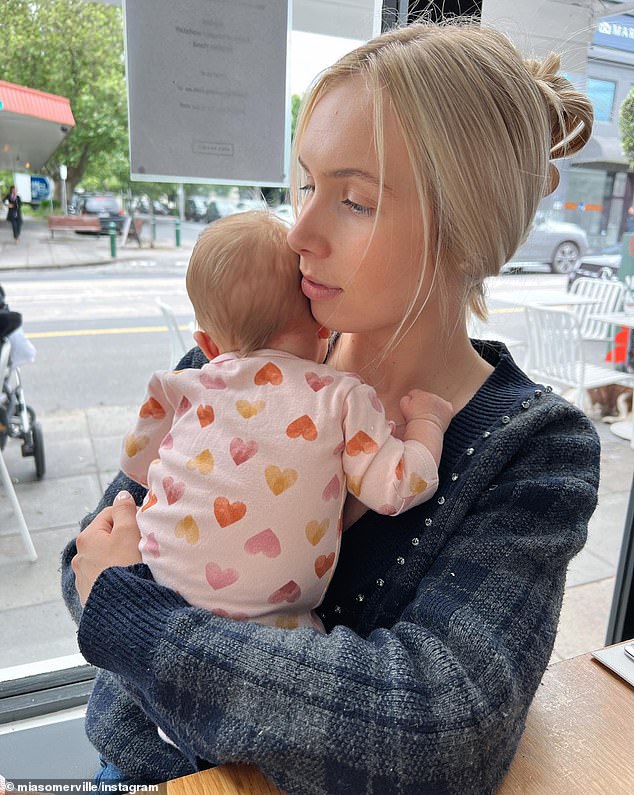 ‘We are so obsessed with perfection as a society that we are so pressed about a woman’s body looking this way. It is mind boggling, I’m not worried about it, why are you?,’ she said.

Mia admitted she wasn’t prepared for the ‘mental and physical’ changes of motherhood and said she shared the video to try and ‘normalise’ post-partum bodies.

‘We’re not exposed to real bodies in the mainstream media. All the celebrities and influencers you see appear to just ‘bounce back’ days after giving birth,’ she told news.com.au.

‘Tammy Hembrow was in her gym gear literally the next day after having her third child. I’m still young and was always quite slim. So I just assumed that I’d just ‘bounce back’ too, and that I’d look exactly the same.’

Mia said the online trolls didn’t bother her but she worries about other mums reading the nasty messages and feeling bad about themselves but added she was overwhelmed by the positive responses.

‘It meant everything to me when others said my video helped them feel seen and validated. We’re all in this together. At the end of the day, you get a beautiful child out of it,’ she said.