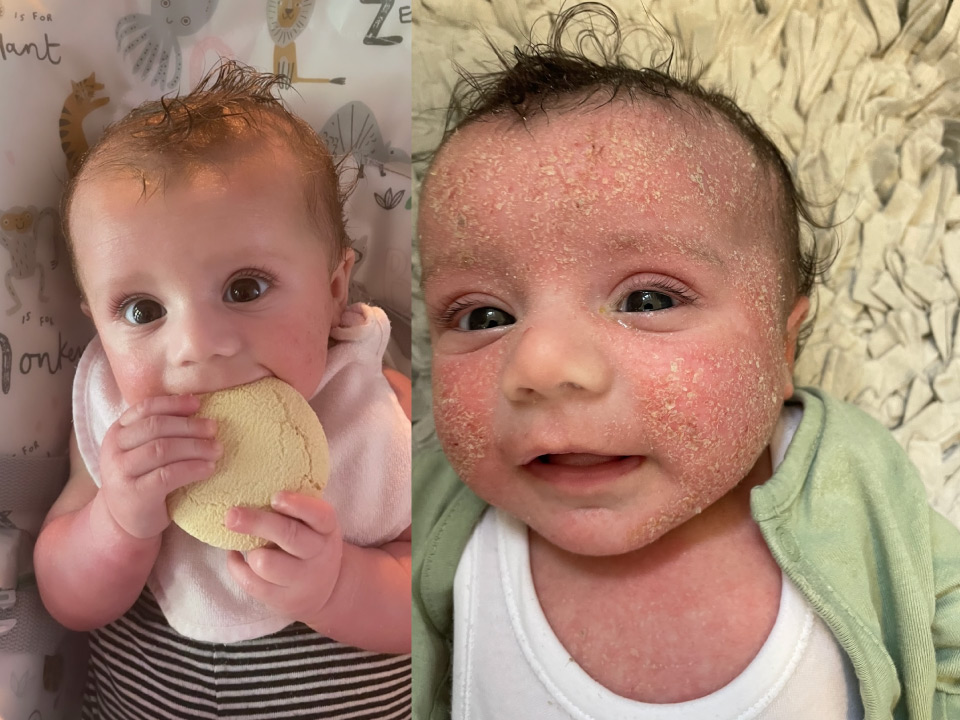 This article contains affiliate links. We will earn a small commission on purchases made through one of these links but this never influences our experts’ opinions. Products are tested and reviewed independently of commercial initiatives.

It’s hard to watch your baby in distress. It makes you feel helpless when you’re unable to soothe them or take away their discomfort. This is the position that lots of parents find themselves in when their little one suffers from eczema.

In the UK, one in five children suffers from childhood eczema. Parents can spend a fortune in search of the miracle cure, ointment, or lotion, only to be left frustrated and disappointed that they still can’t help their baby get relief.

But parents have been swearing by Balmond’s Skin Salvation, an all-natural balm made with potent earth-kind ingredients.

Mum Allia De Paula spent nearly six months in search of help to soothe her daughter’s eczema having been prescribed lotions and steroid topical creams that didn’t seem to help.

Her baby was diagnosed at three months and was told it was something that she had to wait to ‘grow out’ of by the doctors which left her feeling determined to find a solution.

After being given the Skin Salvation, Allia noticed a difference overnight and ended up crying with joy that she’d found her ‘saving grace’.

‘Overnight, I kid you not, my daughter’s dryness started to flake off and her skin was smooth as it was the first three months of her life. I was changing her diaper in the middle of the night and found myself crying tears of joy because of it,’ she explained.

‘Now she can enjoy rompers and shorts in time for the summer without scratching her life away 24/7. She still deals with redness due to the heat but nothing that’s unbearable for her and for me when I see her. I’m so grateful for this miracle that is Balmonds.’

Skin Salvation is packed with organic ingredients such as chamomile, calendula, chickweed and nettle and hemp seed oil, olive and safflower oils to help soothe inflammation as well as nourish depleted skin.

It is free from potentially irritating perfumes, paraffin, steroids and sulfates.

Another mum, Amber Leigh, says her baby’s ezcema was so bad that he could barely see out of his eyes at one point.

‘My three-month-old baby had been suffering with extreme eczema, his skin was completely raw and cracked, causing lots of itching and discomfort. The flare-up became so intense his eyelids swelled almost shut,’ she said.

‘After trying various prescription creams I decided to order skin salvation, this stuff is magical. My baby’s skin is clearing up so fast! I didn’t believe the hype to begin with but it really is amazing.’

One mum looks back on her baby’s first year of life and realises how much she missed because of her eczema but is delighted that she saw noticeable results after just one week.

‘My daughter has been suffering with eczema since she was five months old. She even had an allergic reaction to steroid cream, which makes her skin very bad (as seen on the first photo). We used Balmonds Skin Salvation ointment on her infected eczema and after a week her skin became clear (as seen on the other photo). It reduced the swelling, redness and over all her skin is getting better,’ mum Joyce Anoshi said.

‘She missed a lot of things in her first year because of suffering from eczema. Now she’s a happy toddler who’s always dancing and playing.’

Balmonds Skin Salvation comes in three different sizes and prices range from £7.99 to £19.99.

For more information or if you want to buy it, click here.