Mother whose son, 14, was diagnosed with blood cancer just DAYS after she spotted a tell-tale bruise reveals he’s now in search of a stem cell donor to give him a ‘second chance’ of life

A mother whose teenage son was diagnosed with cancer after she spotted a bruise on his leg is appealing for more people to sign the stem cell register.

Nickie Walch’s 14-year-old son Harrison was diagnosed with acute myeloid leukaemia in April and has since had two cycles of chemotherapy.

After his second round of treatment doctors told the family, from Aston, South Yorkshire, there was a higher risk of the cancer returning and advised Harrison undergo a stem cell transplant.

However after checking the worldwide register with charity Anthony Nolan, no perfect match was found for the youngster.

The family are now appealing for more people to register as donors. 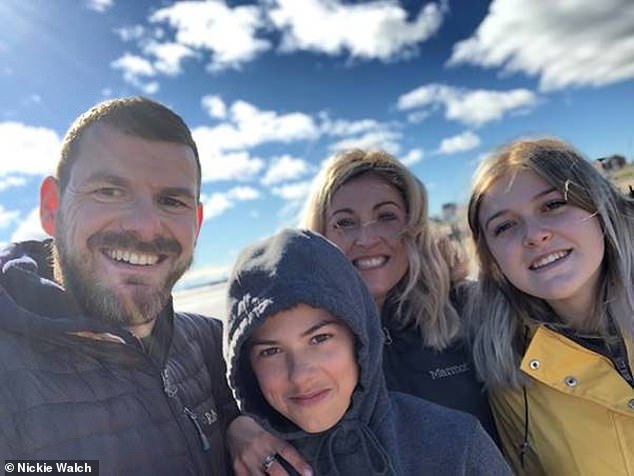 Harrison Walch, 14, was diagnosed with acute myeloid leukaemia in April and needs a stem cell transplant. He is pictured with his father Steve, 43, mother Nickie, 40, and older sister Daisy 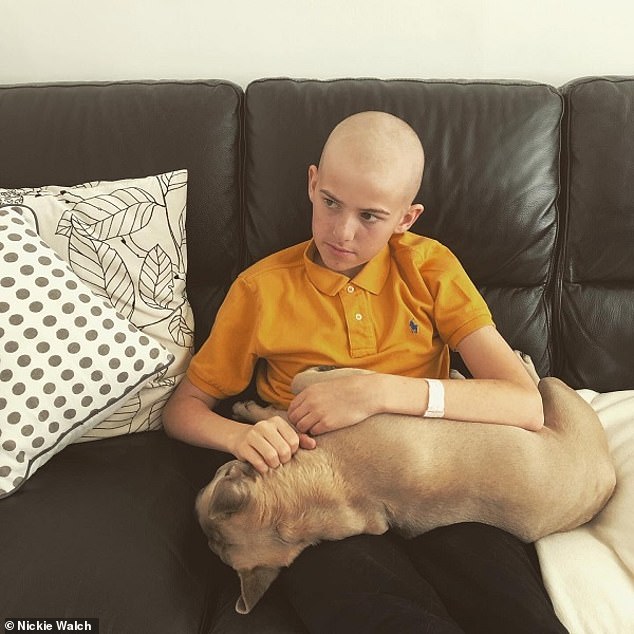 After Harrison’s, pictured with his dog Leo, second round of chemotherapy doctors discovered he may be at higher risk of the cancer returning and would need a stem cell transplant

Since being diagnosed with AML Harrison has had to give up many of his favourite things, including playing right back for Aston Swallownest Blues under 15s football team.

Mother Nickie, 40, explained how her usually active son had become extremely tired over the course of two weeks before he was diagnosed.

She said: ‘One day I spotted a bruise on his leg. Harrison hadn’t noticed. We initially put that down to him being a growing teenage boy who loves playing football.

‘But, later, more small bruises appeared, and I asked if he had been messing about at school. 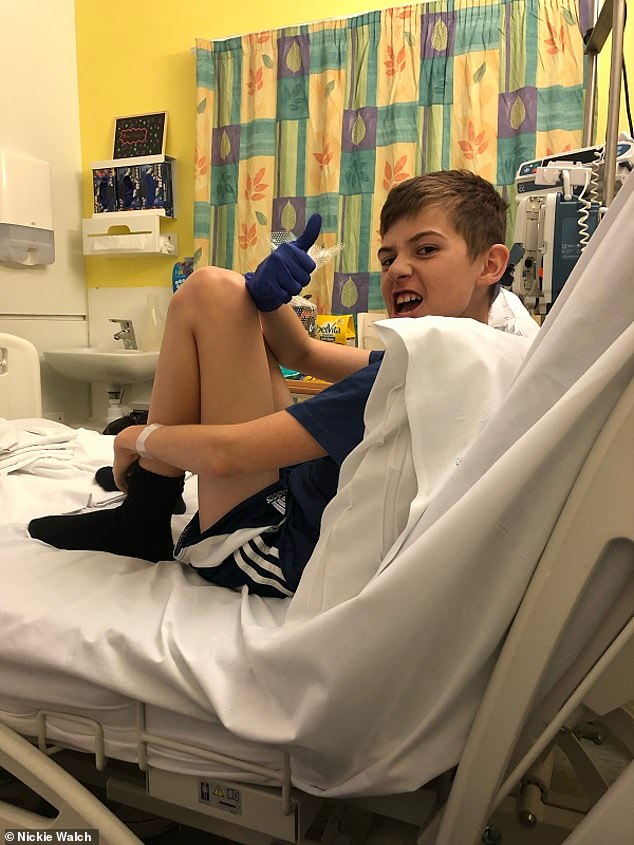 Harrison’s mother Nickie said he was usually an active teenager but she noticed him getting extremely tired in the weeks before taking him to the GP. Pictured is Harrison during treatment 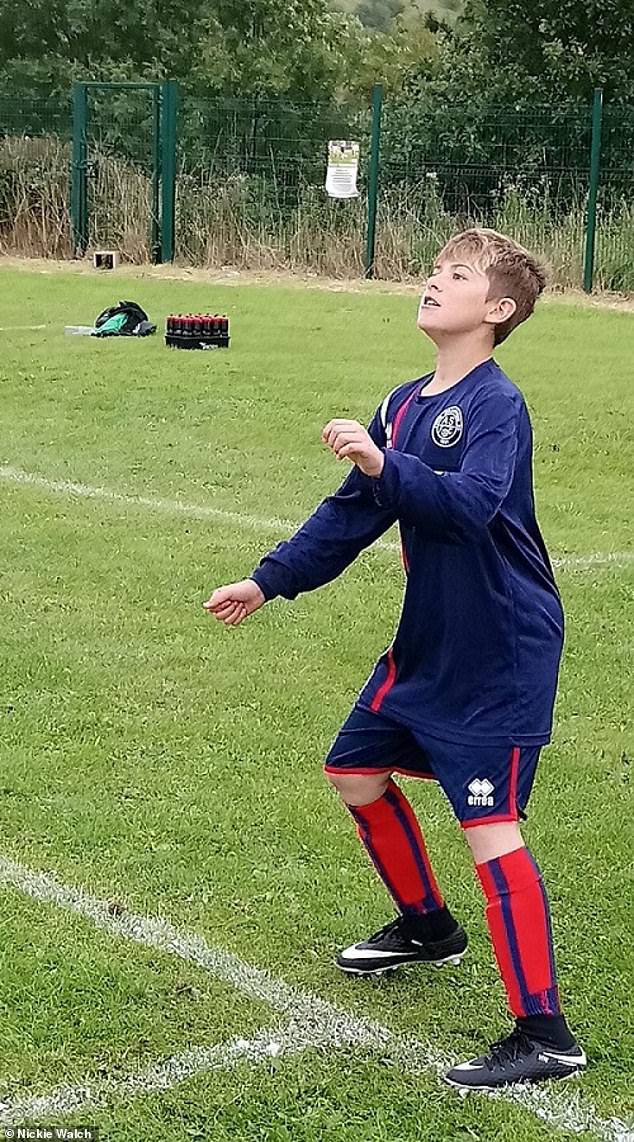 Since being treated for cancer Harrison, pictured, has had to give up many of his favourite things, including playing right back for Aston Swallownest Blues under 15s

‘I remember we went for a long dog walk and Harrison was struggling to cycle. The next day he went to school, as usual, but he wasn’t himself when he got home.

‘I looked for Harrison’s symptoms online. Leukaemia came up and I had a sick feeling in my stomach.

‘Harrison had always been a healthy child – we would all catch colds but not him. He had never even been prescribed antibiotics.’

The next morning Nickie called her GP and after explaining how concerned she was they gave her an appointment. 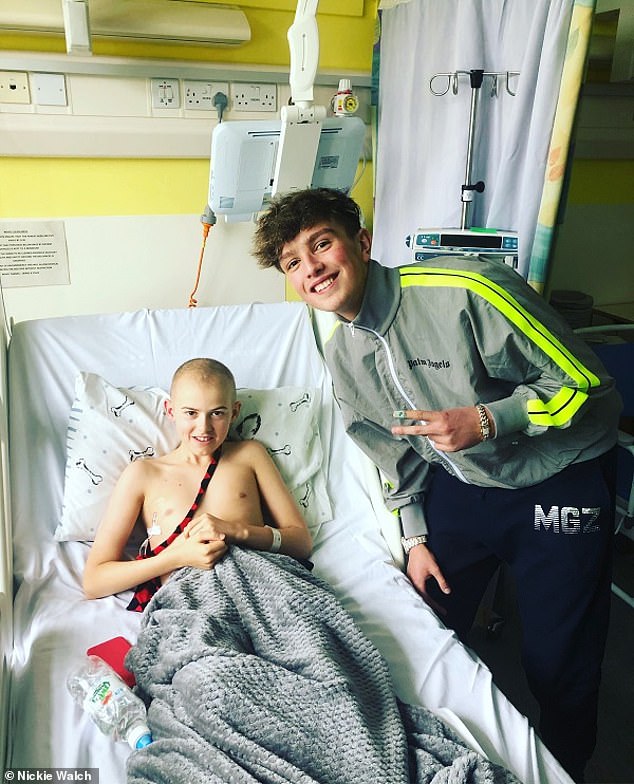 Harrison, pictured with YouTuber Morgz while in hospital, was admitted to the oncology ward at Sheffield Children’s Hospital for two cycles of chemotherapy treatment

Nickie said: ‘Our GP saw Harrison and arranged a blood test straight away.

‘Several hours later, he called me on my mobile to tell me that Harrison’s white blood count was extremely high, indicating something was seriously wrong and we had to go straight to hospital as they were expecting us.’

Harrison was admitted to the oncology ward at Sheffield Children’s Hospital.

Nickie said: ‘Our worst fears were realised. The consultant explained that it was likely to be leukaemia and that Harrison would need a bone marrow biopsy and to have a line in his chest to have chemotherapy. 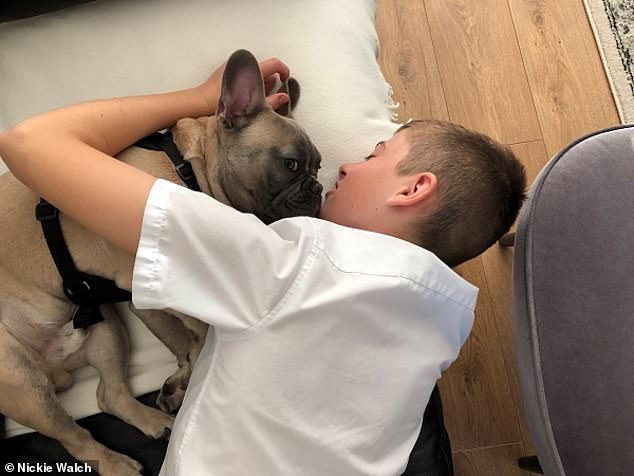 Harrison’s older sister, Daisy, was tested to see if she could be his donor but unfortunately she was not a match. The teenager is pictured with his dog Leo 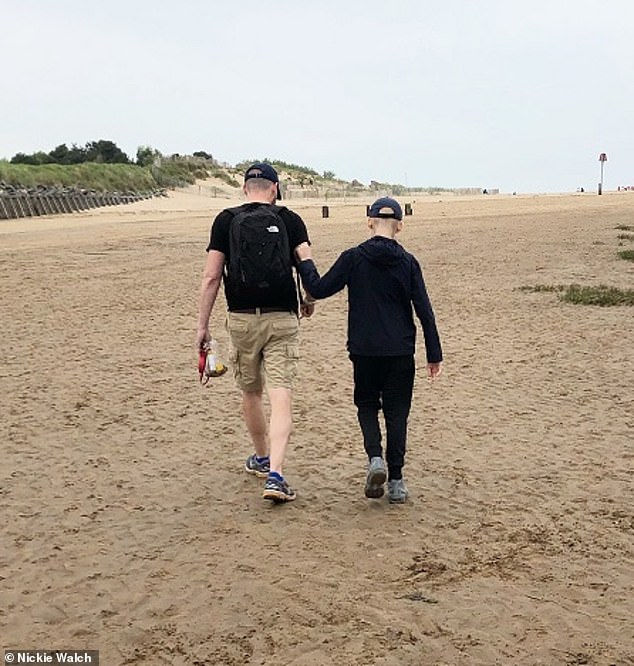 Nickie said ‘devastated’ didn’t even ‘begin to cover’ the feeling when the family was told about Harrison’s cancer. He is pictured with Steve walking on the beach

She continued: ‘Devastated does not even begin to cover how we were feeling.

‘I kept thinking “how could this happen to our beautiful son?” You read about it, see it on social media and the TV but you never ever think your child will be diagnosed with cancer.’

Harrison started chemotherapy the next day and has since completed two cycles of treatment.

After his second cycle doctors discovered that Harrison may be at higher risk of the leukaemia returning and would need a stem cell transplant – putting new, healthy stem cells into his bloodstream. 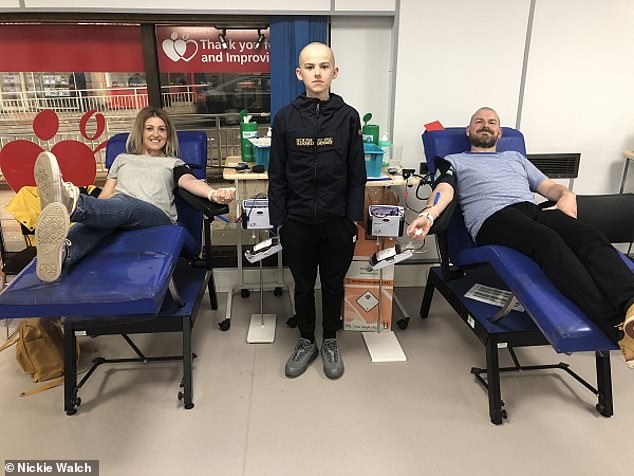 Nickie, pictured giving blood with Steve and Harrison, said: ‘My son received so many blood and platelet transfusions during treatment, it’s only fair we pay it back [by donating blood]’

Harrison’s older sister, Daisy, 17, was tested to see if she could be his donor but, unfortunately, she was not a match.

WHAT IS ACUTE MYELOID LEUKAEMIA?

Acute myeloid leukaemia (AML) is a type of blood cancer that starts in young white blood cells in the bone marrow.

AML affects around one in 200 men and one in 255 women in the UK at some point in their lives.

Approximately 19,500 new cases occur every year in the US.

It is most often diagnosed in older people.

AML’s exact cause is unclear, however, risks include:

AML is usually treated via chemotherapy. A bone marrow or stem cell transplant may be required.

Nickie said: ‘[The charity] Anthony Nolan has checked the worldwide stem cell register and there isn’t currently a perfect match for Harrison.

‘He is a polite and friendly boy. He has taken it all in his stride and even though he understandably has some down days he tries to be positive.

‘We really want to spread the word. We didn’t know about the stem cell register, which is ridiculous – all those people, worldwide, that need help.

‘It’s important to get our story out to raise awareness and hopefully inspire more people to sign up. How amazing would it be to save someone’s life?!’

Head of Register Development at Anthony Nolan Rebecca Pritchard said: ‘Harrison’s perfect match is out there – someone who could give him a second chance of life.

‘We want to give patients the very best chance, and every single person who joins the Anthony Nolan register has the potential to help save a life.

‘If you’re aged 16-30 and in good general health, you can join the register online and we’ll send you a cheek swab in the post.’

Anthony Nolan recruits people aged 16-30 to the stem cell register as research has shown younger people are more likely to be chosen to donate.

The charity needs more young men to sign up, as they are most likely to be chosen to donate but make up just 18 per cent of the register.

The charity also carries out ground-breaking research to save more lives and provide information and support to patients after a stem cell transplant, through its clinical nurse specialists and psychologists, who help guide patients through their recovery.

To find about more about joining the register, or to find out more about the different ways you can support, please visit www.anthonynolan.org/Harrison