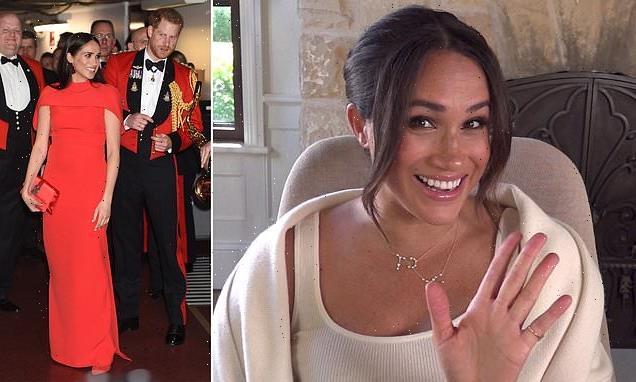 JAN MOIR: I fear the Duchess of Martyr’s podcast will be about settling old scores… As is often the case with the Sussexes, one is torn between applauding them for marvellous altruism or wondering if what they are doing is cold-eyed legacy-building

Drum-roll, please. It was part of an £18 million contract and has been nearly two years in the making but, hallelujah, it is here at last.

No, not the latest stretch of Crossrail or a new cancer ward for the little kiddies, but the Duchess of Sussex’s much-trumpeted Spotify podcast.

Called Archetypes, the series will be launching soon, with Meghan promising to use the broadcasts to look at the way women are portrayed in the media and ‘the labels that try to hold them back’. Uh-oh.

I think I can see where this is going. And I’ve got a feeling that those ‘holding back’ labels are not going to be the ones on the back of a max-control Spanx bodysuit.

Is it so very, very awful to suggest that a better and more accurate title for the podcast series would be ‘The One Where I Get Even With Every Bad Bitch Who Ever Bitched About Me’? 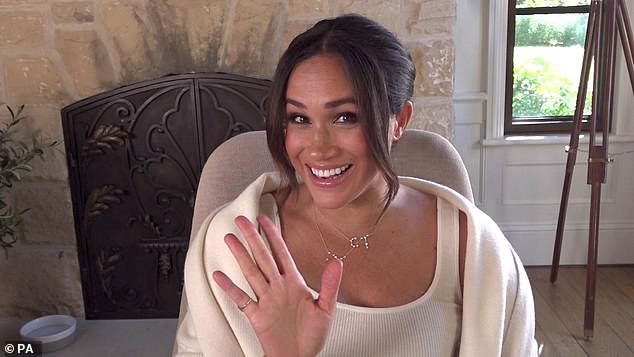 Uncensored: The Duchess of Sussex. (Pictured: Meghan Markle during a video released to launch 40×40, a global project to encourage people around the world to commit to giving 40 minutes of their time to support women going back to work)

As is so often the case with the Sussexes, one is torn between applauding them for a marvellous tranche of pure altruism which will benefit the entire world, or wondering if what they are doing is only a bit of cold-eyed, legacy-building, myth-controlling PR?

Meghan promises that Archetypes will feature ‘uncensored conversations’ with historians, experts and women ‘who know all too well’ that being categorised can influence and change narratives.

Of course, she doesn’t mean archetypes: she means stereotypes. But that would also mean she’d have had to call her son Stereo, and in the stampede to trademark everything ‘Arch’, she probably didn’t think of that. I digress.

A Spotify statement says Meghan plans to uncover the origins of these oh-so damaging stereotypes, and address the ones that have ‘historically generalised women through the lens of popular culture and media’.

What does that actually mean? That we’re going to have to get furious all over again at the way Goldie Hawn was portrayed as a dizzy blonde in Private Benjamin, while agreeing that the 1990s tabloid fixation with Pamela Anderson’s breasts was, you know, a bit off?

Or is it going to be much more specific? The smart money is on the latter — and on deep-dive Sussex specifics in particular.

Certainly, Sussex confidant and biographer Omid Scobie has, in the past, written and talked about the reputation Meghan has as a ‘Duchess Difficult character’ and how such ‘cliched stereotypes are quite dangerous, particularly when we’re talking about successful women of colour being called too difficult, too demanding, too ambitious’.

This is problematic ground. While not wishing to undermine what the Duchess sees as her lived experience, the concept of ‘being difficult’ as a racial stereotype is a new one on me.

Britain’s Prince Harry, Duke of Sussex and Meghan, Duchess of Sussex, pictured, as they arrive to attend The Mountbatten Festival of Music at the Royal Albert Hall in London in 2020

Seduced by The Split? You bet

The Split is back — but only for a third and final series.

Described by the BBC as ‘a steamy legal drama’, it features the Defoes, a family of female divorce layers whose own relationship problems would keep the courts busy for months.

It stars Nicola Walker as Hannah, a woman whose eyes fill up like paddling pools when she discovers husband Stephen Mangan’s latest betrayal, despite the odd Dutch-based dalliance of her own — and I’m not talking tulips.

The Split is so deftly written, acted and produced that each episode is an hour of pure bliss.

But most of all I love the show’s wardrobe, especially the perfectly pitched London lady lawyer outfits.

‘You have to look reassuringly in control and reassuringly expensive,’ Walker said, in an interview, of Hannah’s clothes, which includes blazers from McQueen, bodycon dresses from Roland Mouret and this week, a perfect blue silk blouse from The Fold — very reassuringly priced at more than £300.

Hannah wears her tailored jackets as if they were armour.

In many scenes, she is as miserable as a salted slug, but every man she meets wants to sleep with her.

What is her secret? It can’t just be her expensive briefs. 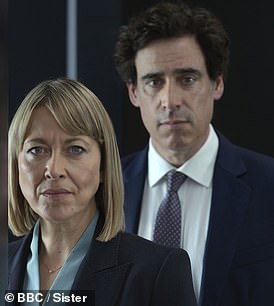 Suited: Nicola Walker and Stephen Mangan, both pictured in BBC’s The Split

If you were to fish out some random guppies from the celebrity swamp of strop, your net would bulge with the likes of Madonna, Russell Crowe, Prince Andrew, Naomi Campbell, Nadine Dorries, Morrissey, Alec Baldwin, Kanye West, Elton John and Sharon Stone, to name a few.

All have reputations for being difficult people, and all have nothing in common except their tantrums.

Indeed, Meghan could kick off her podcast by examining her own film career, in which she has played every female stereotype known to — forgive me — man.

For example, there is the common stereotype of the airhead party girl who wears little black dresses and obsesses about getting a boob job.

As evinced by a character called Dana, played, in a 2006 film called The Boys & Girls Guide To Getting Down, by a young actress called Meghan Markle.

Another party girl who hangs around in a gold dress waiting to be snogged by Russell Brand? Meghan again, in Get Him To The Greek (2010).

A stripper called Kelly with a heart of gold? That’s the character played by Meghan in a 2008 film called The Apostles.

How about an ambitious small-town girl who sacrifices everything for a big-city job, only to realise she should have stayed at home and married the boy next door instead? Let’s hear it for Meghan as Amy in the 2014 film When Sparks Fly.

‘I went after the wrong dream and lost the person I cared about the most,’ she simpers in the final scenes.

Yes, sisters! Stay at home where you belong and polish the glass ceiling instead of trying to smash it, you crazy chick.

Look. No one ever suggested, then or now, that Meghan Markle somehow did a disservice to women of colour by playing these characters who weren’t perfect or inspiring, but were all too human instead.

Why not? Because it would be preposterous, unwarranted and unfair — but the rules for real life seem to be different.

Anyway, archetypes, stereotypes, media types — call them what you will, it’s all going to be great.

I look forward to seeing which typecast females the Duchess of Martyr will consider worthy of examination, while wondering if Evil Half-Sister, Grandma Moneypot and Jealous Sister-In-Law will make the cut.

Most of all, I am hugely looking forward to the episode in which Meghan will be having an uncensored conversation with herself about stereotyped females and her own role in perpetuating so many of them. 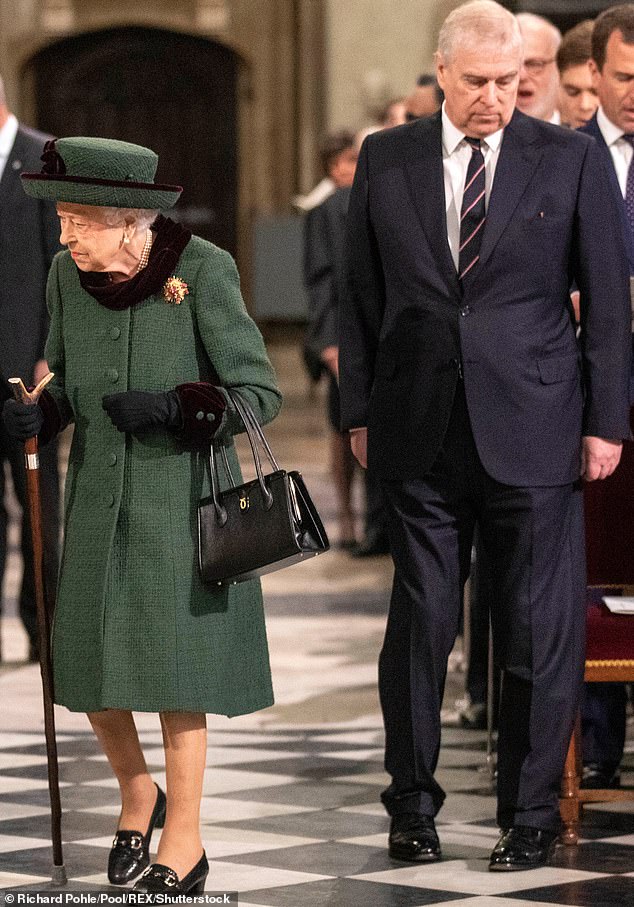 Prince Andrew, right, after leading the Queen into the service of Thanksgiving for the life of Prince Philip, Duke of Edinburgh at Westminster Abbey

There is no shame in public life any more. Look at Prince Andrew attempting to thrust himself back into the front line of royal duties, instead of retreating to a potting shed on the Windsor estate, whereupon to compare himself to a worm and come off badly in the analysis.

Actor Will Smith appears to be carrying on as if nothing bad had happened at the Oscars, when he should be hiding out of sight under the rock of disgrace.

And at the Grammy Awards this week, the six nominees in the best comedy album category included Chelsea Handler and Lewis Black — but somehow the judges voted for Louis C.K. to win, despite his admission in 2017 of multiple allegations of sexual misconduct.  That is the biggest joke of all, but no one is laughing. 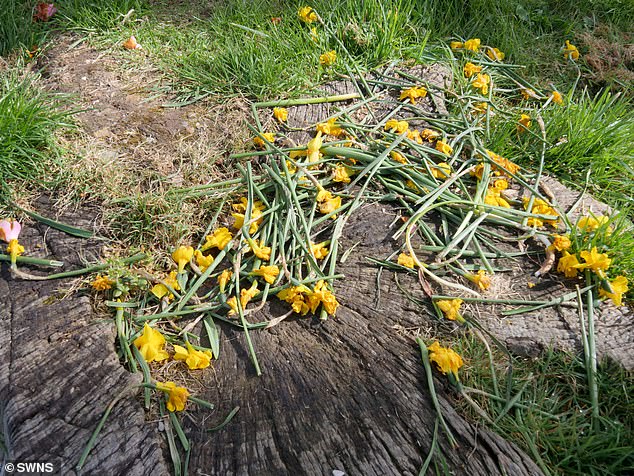 There are to be no more daffodils grown in a park in Cornwall after the St Blaise council said children might eat them and fall ill.

Why? Because the bulbs are toxic. Good grief, I didn’t realise death by daffodil was a thing.

Nor that if children are told not to dig up daffodil bulbs and eat them, they will just go right ahead and do it.

They will disobey their parents, they will run to the nearest daffodil patch and they will dig up the bulbs with their bare hands, truffling for the delicious golden snack that they prefer instead of yukky chocolate or sweets.

Once they locate the buried treasure, they will munch away like squirrels while singing ‘I found my thrill, on Daffodil Hill’ at the tops of their little voices.

Or perhaps they won’t. Not for the first time this week I find myself wondering, whatever happened to common sense?

Like the rest of the country, just like all of us, he was fooled by a master manipulator who kept his terrible act going for years.

Let us eat cake, you meanies

I’d like to weigh in on ‘cakeage’, the practice in which restaurants charge customers for bringing along celebration cakes for their party.

London-based TV writer Ivor Baddiel reported that one restaurant wanted to change him £10 per head for his cake, which not only seems extortionate, it also makes it clear to the customer that they are not a valued guest in the restaurant, but merely a transaction.

Fair enough that restaurants want to charge something — they are a business and they are losing the sale from the dessert menu.

But a one-off charge similar to corkage, perhaps of around £20, seems about right to me.

After all, the restaurant has no financial layout for labour or ingredients and to insist on anything more puts a downer on the whole evening.

Some restaurants don’t charge anything at all, and I bet their goodwill brings in more business.

However, the sad truth is that the hospitality industry can sometimes be very inhospitable indeed, far more concerned with profit margins than customer satisfaction.

If the restaurant business wants to tempt people back after the pandemic, then they are going to have to try a lot harder and care a bit more than this.

In Glasgow Sheriff Court, William Weir walked away with just paying £1,000 compensation for beating his girlfriend’s face to a pulp and leaving her with lifetime scars.

Now 20, Jordana Rutherford says his punishment is a joke — and she is right. Meanwhile, at Westminster Magistrates, Nathan Blagg was jailed for eight weeks for posting racist comments on Twitter.

There is no excuse for the behaviour of either man, but don’t you get the feeling something is very wrong in the deployment of justice?