Mike Greco, who was known to connoisseurs of Italian cuisine as “the Salami King” and “the Mayor of Arthur Avenue,” and whose salumeria has catered to old neighbors, visiting politicians and insatiable Bronx expatriates for more than six decades, died on March 22 in White Plains. He was 89.

His death was confirmed by his son David. Mr. Greco, who lived in Yonkers, died in a rehabilitation center at White Plains Hospital.

A Calabrian immigrant, Mr. Greco and his 17-year-old twin brother, Joe, arrived in New York in 1947, each sporting a new suit and carrying $50. Mike went to work in a Bronx butcher shop, married the boss’s daughter and, in the early 1950s, opened a delicatessen nearby in the Arthur Avenue Retail Market, a building housing an array of merchants.

Mr. Greco started work at 6 a.m. seven days a week and made Mike’s Deli a place of pilgrimage in the heart of the Bronx’s Little Italy, roughly bounded in the Belmont section by Fordham Road on the north, East 181st Street on the south, Third Avenue on the west and the Bronx Zoo on the east. (The neighborhood’s most famous alumnus is probably Dion DiMucci, whose group, the Belmonts, plaintively sang in 1959, “Why must I be a teenager in love?”)

Mr. Greco became a fixture in a Bronx enclave that stubbornly resisted change in the second half of the 20th century, when much of the borough, especially to the south, was plagued by crime, white flight, housing abandonment and arson.

“Every time he gets interviewed, he cries” about the Bronx’s afflictions, David Greco told The Daily News in 1994. “His heart, sweat and blood are here.”

Mr. Greco was larger than life. He might belt out a Puccini or Verdi aria as he sliced mortadella or weighed bright green olives imported from Castelvetrano in Sicily.

At times, he would strike a dictatorial pose, taking his cue from the 1939 Life magazine cover photograph of Benito Mussolini that hung over the cash register. The photo inspired another son, Marco, who worked at his father’s deli for many years, to write and star in a well-reviewed one-man autobiographical play, “Behind the Counter With Mussolini.”

Mr. Greco’s deli earned a reputation for quality and consistency. In 1988, the cookbook author and teacher Marcella Hazan visited and pronounced the dried porcini and the imported Parmesan cheese especially good values.

“This is very much like a salumeria in Parma,” she told The New York Times.

To wit, the imported Parmigiano-Reggiano is aged for as long as 36 months, mozzarella is homemade and Mike’s eggplant parmigiana is so well-prepared that it beat the star’s in an episode of the Food Network show “Throwdown With Bobby Flay.” Curtains of cured meats dangle from the ceiling, vats of olives crowd the floor and crates overflow with fruit and vegetables.

David Greco inherited the business in the 1990s and expanded it into an online store and a nearby cafe at 2329 Arthur Ave., but his father’s presence was still felt.

Michele Quinto Greco, the fifth child of Luigi and Luisa Felice Greco, was born on May 8, 1929, in Mendicino in the Calabria region, at the toe of the Italian boot.

His father left for the United States in 1895, worked in the bar and restaurant business and became an American citizen. Periodically he’d return to his wife and six children in Italy. 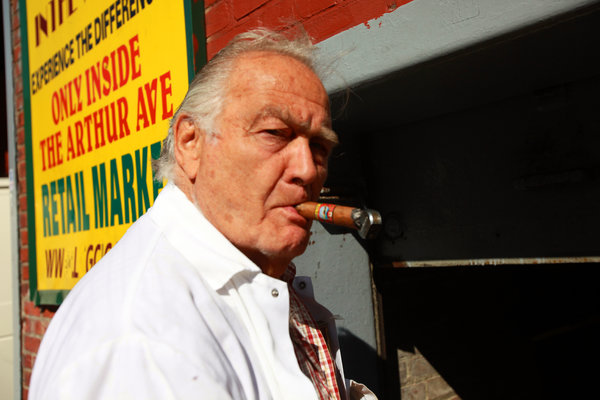 Michele studied for the priesthood at a seminary for seven years before going to New York. In the city, he found work in construction for a time until he was hired by the butcher, Gennaro Cappiello, a Neapolitan immigrant who had operated a store in Belmont since 1922 and had just opened a shop in the new Arthur Avenue Retail Market. The market had been commissioned by Mayor Fiorello H. La Guardia to free congested streets of pushcart peddlers and vendors.

Mr. Greco’s marriage in 1951 to the owner’s daughter, Antoinette Cappiello, ended in divorce. In addition to their son David, he is survived by their son Marco; their daughters, Louisa Greco and Anna Greco Silvani; and five grandchildren.

Even as the Bronx’s Little Italy was shrinking, Mr. Greco’s reputation was spreading beyond it. He appeared in a Ronzoni commercial filmed on Arthur Avenue and had a cameo role in the 1993 film “Six Degrees of Separation.”

That same year, Robert De Niro and Chazz Palminteri, a former Belmont resident, appeared in the move “A Bronx Tale,” which Mr. Greco panned. Not only was it filmed mostly in Brooklyn and Queens, but he thought its profusion of foul language would never have been tolerated in the neighborhood.

“If a kid used those bad words around here,” he said, “we would chase him and say, ‘Go home to your mother.’ ”

The deli became an obligatory stop during political campaigns, although Mr. Greco was visibly disappointed in late 1999 when Gov. George W. Bush of Texas, a candidate for the Republican presidential nomination, toured the indoor market but unwittingly skipped Mr. Greco’s store.

The omission was especially galling because Mayor Rudolph W. Giuliani’s advance team had asked Mr. Greco to remove a photograph of Hillary Clinton, who had visited the deli that year during her first United States Senate campaign.

“Sono neutral perche sono troppo critic per essere politico,” Mr. Greco said diplomatically at the time, a mix of Italian and English that translates loosely as, “I’m neutral because I’m too critical to be political.”

The response was out of character with the portrait of a headstrong Mr. Greco in Marco Greco’s play, which depicts the struggle between an industrious immigrant father and a rebellious son who goes to college and discovers a world beyond the counter of the family’s deli.

In the play, which opened in 1995 at the Belmont Italian-American Playhouse and was performed in 1998 at the York Theater at St. Peter’s Church on Manhattan’s East Side, Mr. Greco describes his father as “a larger-than-life character who ruled with an iron fist and ran his business like a fascist general.”

They eventually come to terms, both in the play and in real life. “I didn’t know tyrants could smile like that,” Marco’s character says.

The real Mike Greco had at one point wanted to be an actor, but he came to consider the deli his stage. When he first saw his son’s play, he smiled, too.

“By himself, he discovered I gave him something good,” Mr. Greco said. “The play, it’s 100 percent true. That’s why he makes me a proud father. He finally found out who is Michael Greco.”