It’s that time of year again: the time when Australia’s brightest stars gather in the South African woods to see who will be first to say those immortal words: “I have nothing else going on right now”.

Yep, it’s I’m A Celebrity…Get Me Out Of Here, and as always the first-night reveal of the cast was a major event. 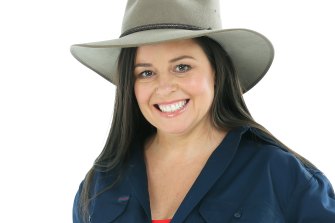 Myf Warhurst is sure to be a favourite.

Of course we already knew that Miguel Maestre would be going into the jungle, and the larger-than-life Spanish chef is surely already a favourite to take out the title, as he brings a relentless positivity and addictive accent to everything he does. Another favourite will be Myf Warhurst, star of TV and radio who has carved out a niche as the nation’s beloved cool aunt. Her dance routine with Miguel was a highlight of the first episode.

Following Miguel and Myf into the jungle – and by “jungle” we mean “peaceful clearing near some trees” – was Tom Williams, who we’re informed is “Australia’s favourite chippy”, and that must be a pretty tough field to come up against. Tom quickly established himself as this year’s token guy who you always forget is on the show.

Charlotte quickly distinguished herself by becoming the first cast member to say the title of the show, as she chickened out of the first challenge: bungee jumping to camp. It was strong evidence for the proposition that the English are more cowardly than Australians, but you can understand why Charlotte decided it was best not to jump: it meant she had to walk the long way to camp, which meant a few blissful hours not spent in the company of Ryan Gallagher. 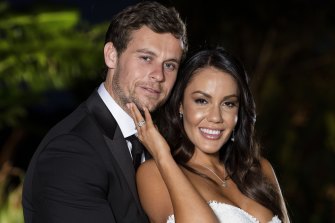 Who is Ryan Gallagher? Why, he’s the next contestant, and he was on Married At First Sight, the popular show about people not getting married at first sight. These days, Ryan assures us, he does comedy, but he’s so modest about it that while on the show he has clearly vowed to never say a single funny thing. Ryan did take the plunge out of the helicopter, and made it safely to earth, which may end up a blessing or a curse.

The aforementioned five made up the first group to arrive in the jungle. The second group kicked off with Rhonda Burchmore, the musical theatre star famous for her long legs and slightly less long career.

Rhonda is a bona fide celebrity, so nobody can argue with her inclusion on the show. To balance this out, she was followed by three women who in a certain light may look vaguely familiar to some people.

First, Nikki Osborne, who is a comedian. Next, Erin Barnett, who you may remember from Love Island, but you won’t because you didn’t watch it. And then Tanya Hennessy, who is a “social media sensation”, which only a very uncharitable person would suggest is a synonym for “unemployable”. Tanya introduced herself to the group by walking straight up and groping Erin, to prove that she’s a friendly down to earth molester.

The second group was rounded out by Dilruk Jayasinha, an actual Logie winner who frankly is slumming it here.

The second group, instead of jumping out of a helicopter, began their adventure by being exposed to various terrifying animals: snakes, scorpions, rats and a porcupine which was actually pretty cute. Then all 10 met up at camp, where they engaged in what has always been the main activity of the show: discussing the toilet.