A dish fit for a duchess! Meghan Markle’s Christmas leftovers recipe turns the last scraps of your festive potatoes into a delicious dinner – and costs less than a fiver

Cooks across the country are currently desperately trying to make the most of the leftovers, and it turns out that the Duchess of Sussex was no different back when she was cooking her own Christmas dinner.

In a newly resurfaced interview, Meghan Markle revealed her own delicious tip for making the most of festive leftovers.

The pregnant duchess, 37, who has spent the past two Christmases with the royal family, shared her own guide to the perfect festive season with Grazia before she started dating Prince Harry. 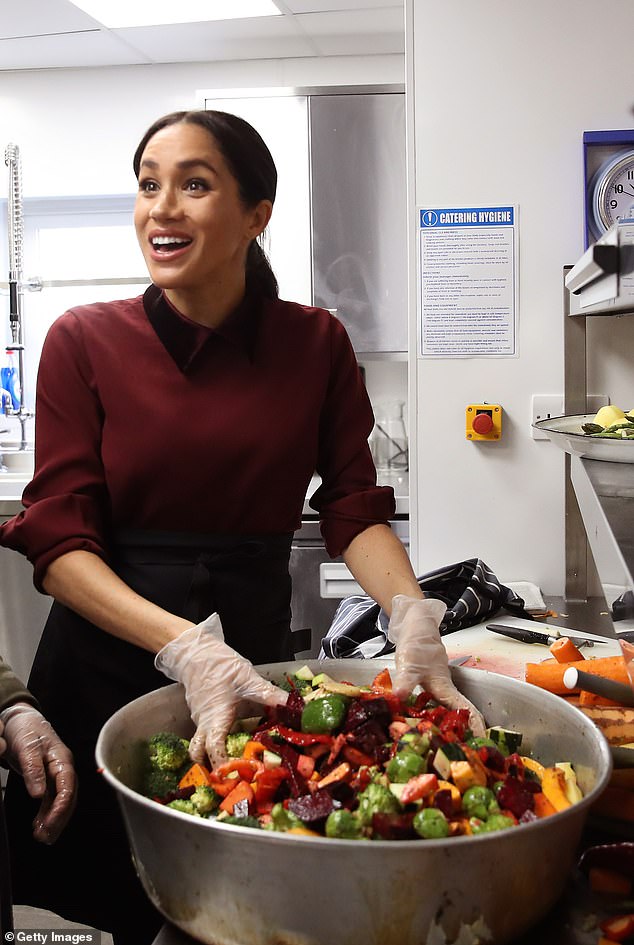 Meghan, who at the time was starring in legal drama Suits and running her lifestyle site The TIG (named after one of Markle’s favourite wines, tignanello), revealed how she often made ‘way too much’ food during the holidays, and used her leftover sweet potatoes to make maple syrup-glazed potato wedges.

Sharing her simple four-step guide to creating the tasty treats, the crafty cook’s recipe also costs less than £5 to make.

Speaking to the publication at the time, Meghan said: ‘If you’re like me, you end up buying way too much of everything for holiday meals.

‘So whether you have leftover sweet potatoes or simply want to revamp the classic holiday side, these maple glazed potato wedges are crave-worthy.

‘With the slight kick from cayenne and the brightness of the added lemon, they will be a crowd favourite.’

Showing her flair for design, the Californian also shared her tips for Christmas decor and the table design, advising to ‘keep it simple with white table runners and napkins’, and add a traditional garland with a ‘twist’ such as magnolia branches around the home. 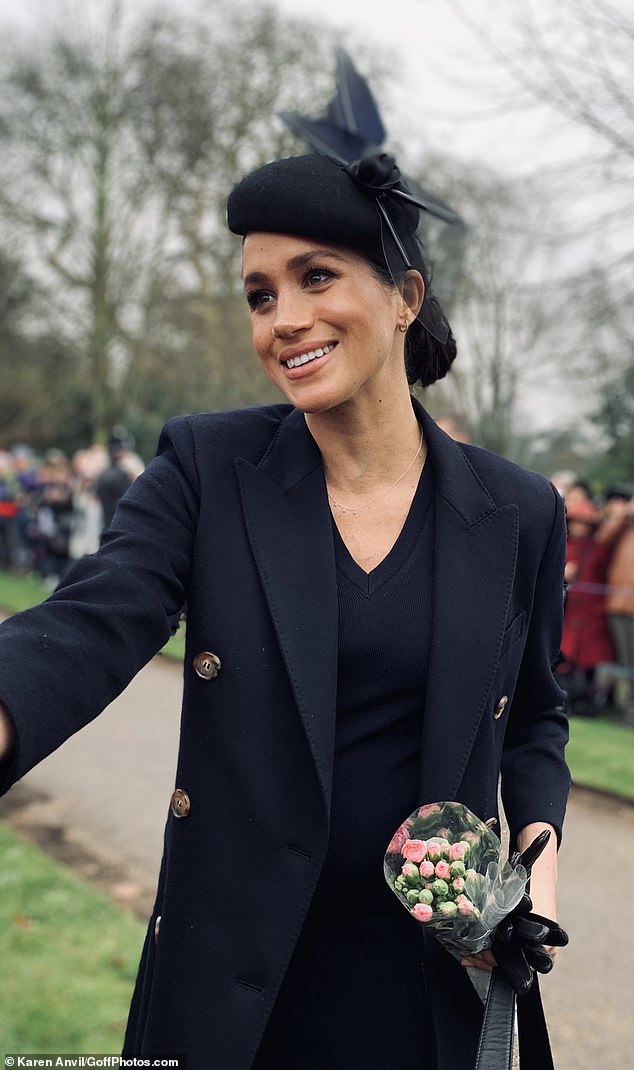 Meghan, seen on Christmas Day this week, previously revealed how she often made ‘way too much’ food during the holidays, and used her leftover sweet potatoes to make maple glazed potato wedges

‘They will be beautiful, browned and crisp and ready to devour’, Meghan concluded in her interview with Grazia

Meghan proved her love for cooking again this year, when she created a charity project with community members affected by the Grenfell Towers disaster.

The book, Meghan’s first solo royal project, features 50 of the Duchess’ favourite recipes created by women from Grenfell’s ‘Hubb Community Kitchen’, set up in the wake of the devastating blaze in June last year.

Meghan met women from The Hubb Community Kitchen who were using recipes passed down through generations to cater for families made homeless by the fire. It was this which gave her the inspiration for the book. 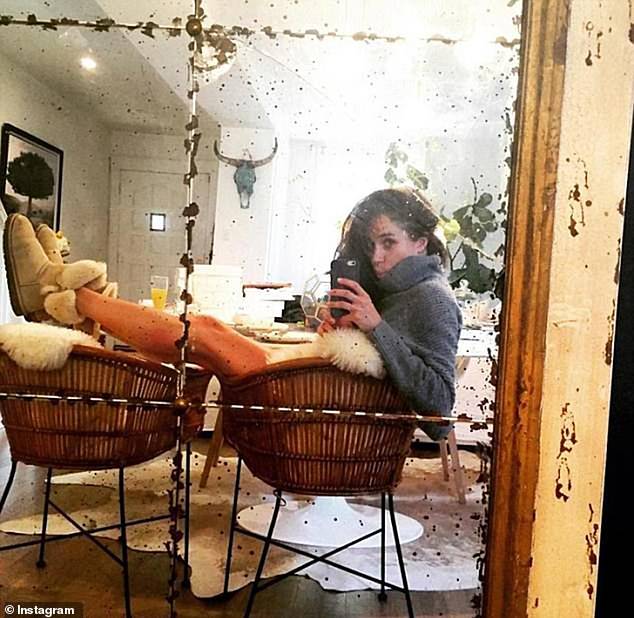 Meghan, seen in her Toronto pad at a time where she was starring in legal drama Suits and running her lifestyle site The TIG, shared her recipe to Christmas leftovers 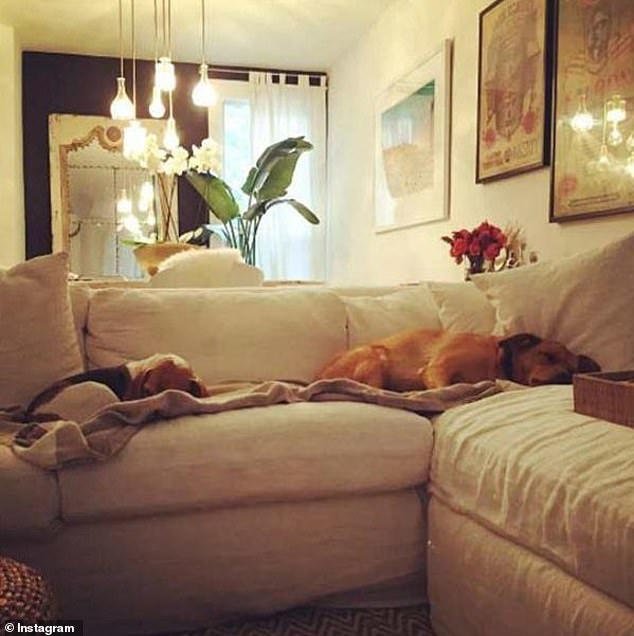 Showing her flair for design, the Californian also shared her tips for Christmas decor and table design, advising to ‘keep it simple with white table runners and napkins, and add a traditional garland or magnolia branches around the home (her old Toronto pad is seen)

Of her first visit, she said: ‘An apron was quickly wrapped around me, I pushed up my sleeves, and I found myself washing the rice for lunch.’ 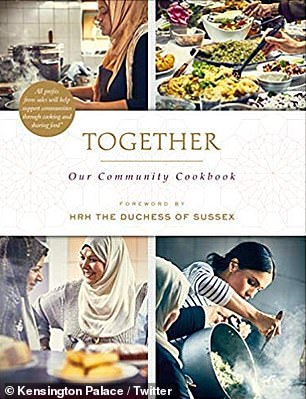 Together: Our Community Cookbook was released in September

Sales of the cookbook reached number one on the Amazon chart within hours of its publication.

A report at the end of November found that the £9.99 collection of recipes had already sold 38,811 copies since it was published in late September, totaling £372,374, according to figures obtained by data analyst Nielsen.

And just last week the book, set up to benefit victims of the Grenfell Tower disaster was nominated for a prestigious book prize.

Together: Our Community Cookbook is among nine food titles shortlisted for the André Simon Food & Drink Book Awards, with the winner due to be confirmed in February 2019.