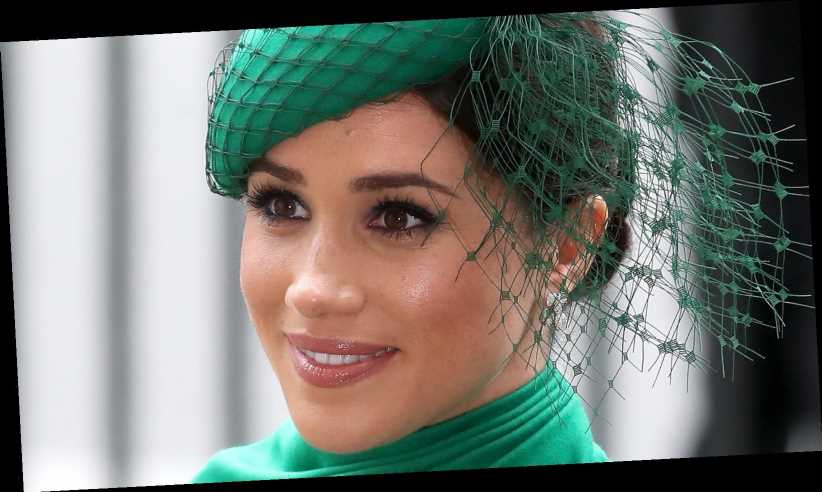 Meghan Markle’s Oprah Winfrey interview outfit has been making headlines ever since a preview of the upcoming event was posted online. Meghan, who recently announced that she is pregnant with her second child, chose to wear a black Armani wrap dress for her first televised interview since leaving the UK. According to Page Six, Meghan’s frock goes for $4,700, and features a “belted waist and foliage embroidery.” As Today noted, she “wore her hair in a sleek updo” and accessorized the look with some special pieces of jewelry. Page Six reported that she sported a Cartier Love bracelet as well as a bracelet that reportedly is “a Cartier heirloom once owned by Princess Diana.” The nod to Lady Di is a very sweet touch that hasn’t gone unnoticed, of course.

Moreover, there was some really strong symbolism present in Meghan’s outfit that goes far beyond a pricey dress that helps conceal her growing baby bump.

That aforementioned “foliage embroidery” featured on the dress Meghan Markle wore on Oprah With Meghan and Harry may symbolize much more than you realize. As Town & Country points out, the flower on the gown’s right side is a lotus, which “is associated with rebirth and spiritual enlightenment.”

The flower has deep roots within various Eastern religions, including Buddhism. “The Lotus flower is regarded… as a symbol of purity, enlightenment, self-regeneration and rebirth,” notes a guide from Binghampton University. “Its characteristics are a perfect analogy for the human condition: even when its roots are in the dirtiest waters, the Lotus produces the most beautiful flower.” Given all of the significant recent changes that have happened in Meghan and Harry’s life, it feels fitting that she chose to wear a garment that featured a lotus to signify her personal rebirth. She and Harry will be discussing this in depth with Oprah Winfrey.