When it comes to most kids, their best hand-painting efforts are usually tacked on the fridge. But six-year-old Ginger Ren Jones-Evans' handprints will soon be exhibited in a private studio – some with a price tag of $3000. 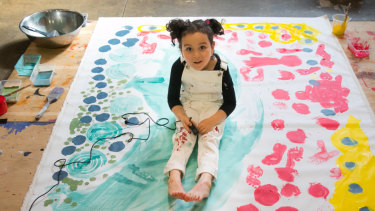 "I figured the best way to make this work was to ensure that the scale was very big, so she would feel free to immerse herself in the body of the work,' he said. "We lay it all out on the floor to allow her to use her body movements to play in that field."

"It is my favourite one," she said. "I love to run up and down up and paint with my feet."

Spanning up to four metres, some of her larger works price at $3000, while smaller works will start at $1200. 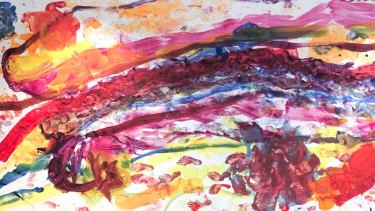 "As an art investor, you really understand the pedigree of what is happening here," said Jones-Evans. "I don't know of any other families who have put on really professional programs like this for their child."

Sydney College of the Arts director Andrew Lavery said it was "unusual" for a child of Ginger's age to have the ability to work at a large scale, while still having "control over their composition and colour palette". 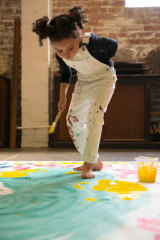 "In their execution, the works could be described as echoing that of the abstract expressionists," he said. "As a young artist, she should be developing a knowledge of such histories, but at the same time developing ways of questioning them and looking beyond them."

"With her talent, this is what I would encourage her to do."

Her father, Lindsay Jones-Evans, believes his daughter is following in the footsteps of her late grandfather, who produced over 3000 works as an abstract painter. He says Ginger's first display of artistic vision glimmered through at the age of two, during her first few weeks at a Rudolph Steiner preschool.

"She would bring home sticks, wrapped in yarn and cloth, she would be painting and doodling endlessly," Lindsay said. "It wasn't until my brother babysat her that he saw what she was capable of, and thought we could take this much more seriously."

Ginger's body of work, which she's been working on for three years – or half her life – will be displayed at the exhibition launch, with art sold on the night going towards supplies, as well as Ginger's education.

"We hope the exhibition will be full of children, as well as adults, that will hopefully be inspired by her work," Lindsay said.